Media Molecule has always had a whimsical style in their games, and Dreams, their new action-adventure game/custom level creator, is no exception. Like previous titles, there’s a lot of room for creativity on top of a story mode. However, unlike prior games, the story mode in Dreams is short, and instead of a dual-focus on story and community, the emphasis is placed predominantly on player-created levels.

Violence: In the story mode, players use a giant hammer and throwing discs to fight enemies, but no there is no blood and the enemies disappear after death.

Spiritual content: There are at least two instances of an NPC bearing resemblance to Hindu deities. A character talks about ghosts and someone becoming possessed while playing an instrument.

Players explore the Dreamiverse, where the dreams of others are created and published for anyone to play. In addition to playable levels of a wide variety of genres, there are dreams that are simply meant to showcase things the creator made, whether it be objects or music. Other dreams work as short movies to tell a story.

You control a little furry creature called an Imp. With it you can grab certain things on screen, as well as possess certain characters and objects such as toys to explore the world. There are a variety of options for what color Imp you want to control, and you unlock more designs as you finish certain challenges.

The official story mode is called “Art’s Dream,” told by a washed-up musician named Art. Tormented by his choice to leave his band several years before, he looks for a way back to his childhood friend and bandmate to apologize to her. You follow him through several levels, each with its own environment and areas to search. Clues that you find scattered throughout each location piece the story together bit by bit.

As Art makes his way back to his band, two additional story arcs play out while he sleeps. In the first, he dreams of Frances and Foxy, toys from his childhood, as they try to rescue his beloved dragon Lancewing from the villainous giant crow Thornbeak. In the second, he dreams of D-Bug and Ele-D, two toy robots, on their own mission to find a giant four-legged robot named Root-R. Both dream arcs are simple and linear platformers, one with combat and one without, and with plenty of prize bubbles containing objects to decorate your home space or your custom levels outside of the story mode. There are also a few puzzles, but there isn’t much to them.

All three arcs have their own genre, and as such, the graphics style adapts accordingly. Art’s arc is a musical, Frances and Foxy’s arc is fantasy, and D-Bug and Ele-D’s arc is sci-fi. Just as real dreams can have strange and abstract images, so does this story at times. There are titanic crows, cryptic conversations, and downright weird music numbers. To top it off, Frances and Foxy come across a mountain in the shape of Art’s face that complains as they work to open his mouth.

As with LittleBigPlanet, Media Molecule built the story levels solely with the tools in the game, in order to demonstrate what those tools are capable of creating, and to inspire players to craft their own dreams. That approach makes Art’s Dream even more impressive, given the variety of aesthetic styles in it.

Before you can craft your own levels, you need to decorate your own living space. The game takes the player through a few tutorials to teach the basics of moving, rotating, and resizing objects. Progressing through each step gives the player prize bubbles as well.

Create mode, where you actually sit down to make custom levels is unbelievably powerful. There is a bit of a learning curve with the tools, and there are dozens of tutorials, ranging from beginner to advanced, to teach players how to use everything. It takes time to go through them all, but it’s well worth it if you really want to utilize all the different tools.

One tutorial covers how to use effects to modify objects in the level. It starts with the objects in the environment as basic shapes, exactly as they look when a game is still in early development. By the end, it looks like a complete, finished level. The game provides a way to compare before and after, and it’s remarkable to see the change.

The level editor feels like LittleBigPlanet‘s in a few ways, but this one is capable of so much more, as it’s three-dimensional rather than side-scrolling.

At the time of this review, the community levels are still imperfect, as creators are still learning the nuances of the tools. However, there are several that are incredibly well done. One of the most impressive ones I played was a work-in-progress Fallout 4 level. It started with a spot-on rendition of the menu, and the look of the environment was nearly perfect. It also included a Mr. Handy in the starting area, as well as a small sewer area complete with Mirelurks to fight.

Another great community level that I played was a ground level exploration of Pelican Town from Stardew Valley. It was still incomplete, but impressive nonetheless. It had the music of Pelican Town, and most of the residents could be found wandering around. The beach was unavailable to explore, as was the upper section of town where the community center, fountain, and playground are located. Even still, it was a lot of fun to see what the town would look like in a 3D style.

Though Dreams is still in its early days, the player-created levels show immense potential. I’m looking forward to what’s to come. As creators grow accustomed to the tools, we’ll doubtless see highly imaginative and sophisticated levels before long. 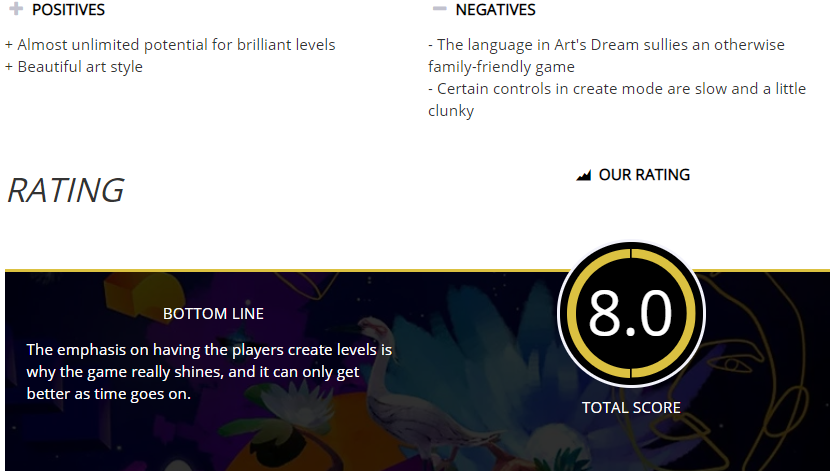 The emphasis on having the players create levels is why the game really shines, and it can only get better as time goes on.