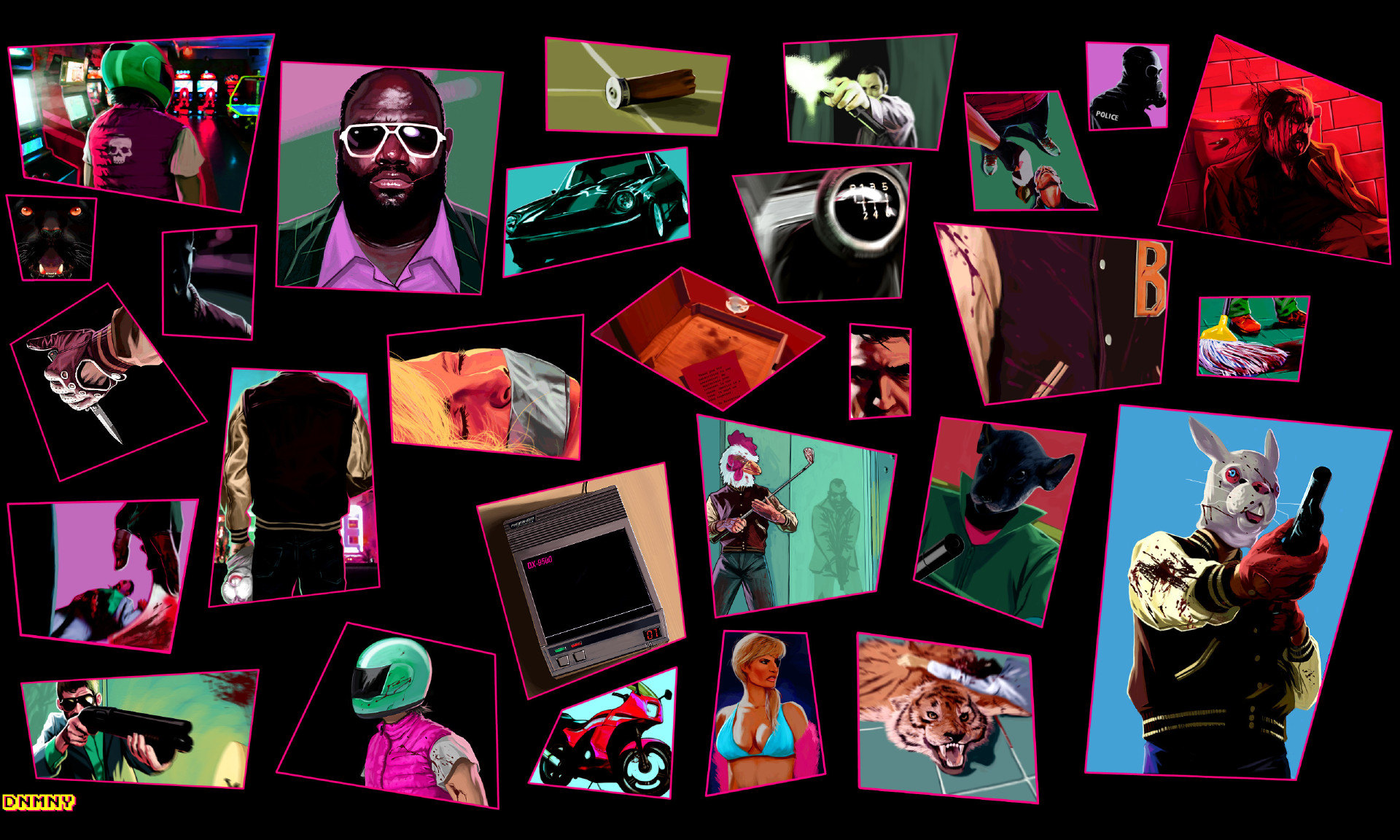 Hotline Miami is the product of Dennaton Games combining the violence, reward system, and one-hit-kill mechanics of Williams’ Smash T.V. with the pixelated sprites, top-down perspective, and plot of DMA Design’s (now known as Rockstar North) Grand Theft Auto, sprinkled with a dash of Fight Club. With its sequel literally around the corner, I decided to see what all the ruckus was about and finally play this game that has been in my backloggery catalog for an embarrassing amount of time. 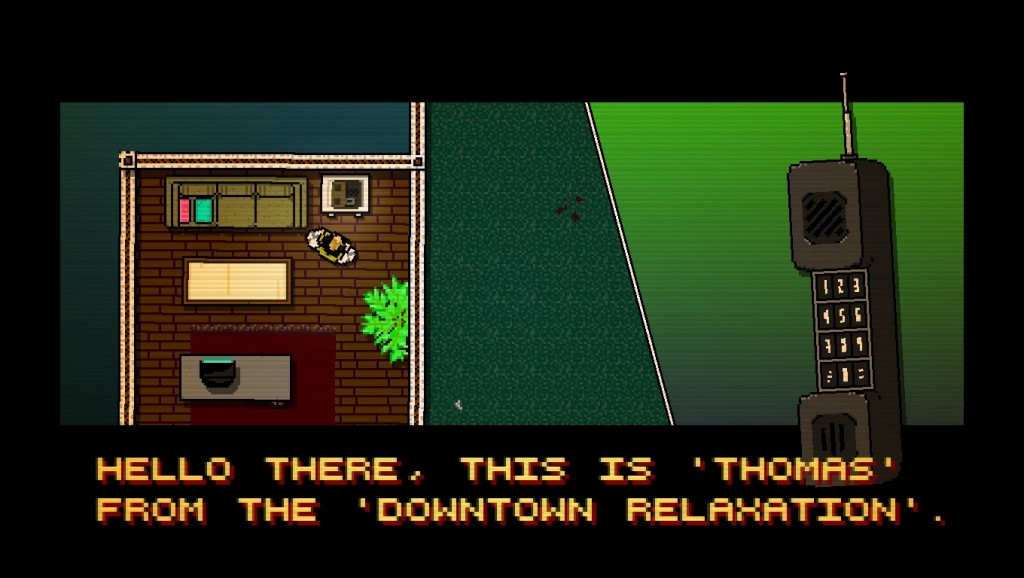 This is the part of the game where I sense the influence of Fight Club. Set in the late 1980’s, due to some undisclosed effects between insanity, schizophrenia, and coercive persuasion, the unnamed player character is prompted to go on murderous rampages through coded messages left on his answering machine, such as “go to a bake sale [at this address]” or “[at this address] welcome the ViPs.” As the players advance through Hotline Miami, the player-character begins to mentally short-circuit after a series of interviews with three animal mask-wearing people who may be real or figments of the player-character’s id, ego, and superego. Eventually, the player-character begins to wonder about the purpose of all of this carnage, and it is then when things really begin deteriorating.

If the usage of Smash T.V. and GTA as creative inspiration are not indications of the content in this game, then Manhunt and Hatred should render a clearer picture. As far as vulgar language is concerned, a few of the four-letter variety reveal themselves, but not as frequently as I expect of games catering to the “mature” demographic. For suggestive themes, there is a single woman in the game who is discovered in her underwear, but nothing which necessitate putting the children to bed.

The nature of the violence in Hotline Miami, however, is macabre to the degree that I am not sure if I should be impressed or concerned that someone would animate low-res sprites to perform fatal eye-gouges, curb stomps, and choke outs for unarmed assaults. Depending upon the melee weapon presently in hand. the player-character adds throat-slits, skull-bludgeoning, and brain stabbing to the execution variety. Guns litter every stage, and no matter the lethal methodology, one can be sure that every floor of every stage will be lousy with mutilated bodies. 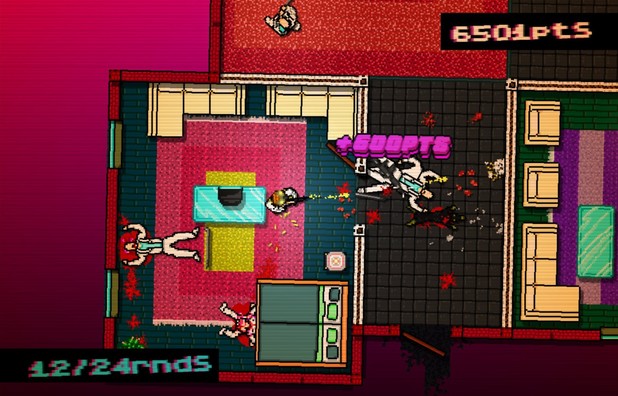 In this game, not even the dogs are safe.

A gamepad is recommended. For this review, I used the Logitech F310.

The Smash T.V. reference is most relevant here because Hotline Miami controls precisely like the twin-stick shooter from 1990, but with modern features such as the ability to lock onto targets from different rooms to complement the 360-degree movement and aiming. This makes cornering and reflex shooting possible in a game where being too slow on the draw will yield a savagely molested player-character and a “You’re Dead” caption. Arsenal possibilities range from baseball bats, katanas, and even scissors—which are unlocked the more the game is played—alongside ranged weapons such as double-barreled shotguns, automatic rifles, and silenced pistols. The latter is a particular boon because enemies in adjacent rooms can respond nose made from gunshots. Sound sensitivity combined with the mechanic of limiting ammunition in weapons to discourage camping, it would behoove players to be as stealthy as possible, meaning that there is a place for melee weapons throughout the game.

Perhaps the most iconic mechanic in the game involves the masks. They seem to be without number, and beyond the default Robert the Rooster mask, each one provides the player-character with bonus traits that help him achieve his goals of mass murder. To be honest, I only used four throughout my entire playthrough. I never figured out what the description of Ramsus the Owl meant by “An Eye for Secrets.” I started a round with a possibly secret mask, Oscar the Mole, and very much disliked the “Darkness” effect, encouraging me to revert back to my trusty Tony the Tiger mask with is “Fists of Fury.” I imagine that this mask is both a play on the surgery cereal-peddling Kellogg’s mascot as well as the Rocky theme song, “Eye of the Tiger,” and the famous and eponymous boxing protagonist. The Tony mask enabled me to bust into a room with three dudes, toss my weapon at one to knock him out, and perform unauthorized facial reconstruction upon the other two with one strike of my fists. Of course, I would come back and put the first guy out of his misery before he regains consciousness in a few seconds, picks up his weapon, and forces me to replay the segment. There are plenty of other masks to discover should the player so choose.

Are you foaming at the mouth for mayhem yet? If not, keep staring at the image.

I have one more classic video game reference for you: Loaded. To be completely honest, Loaded is probably the game closest to a 1:1 ratio with Hotline Miami in design, right down to the top-down perspective, the way that blood splatters everywhere permanently staining the walls and flooring, and the catchy tunes. Nostalgia aside, the soundtrack of Hotline Miami ain’t no Loaded, but while my wife grimaced and turned away as I turned some thug’s countenance into something akin to strawberry applesauce, even she had to admit that some of the tunes were catchy in their 80’s inspiration. 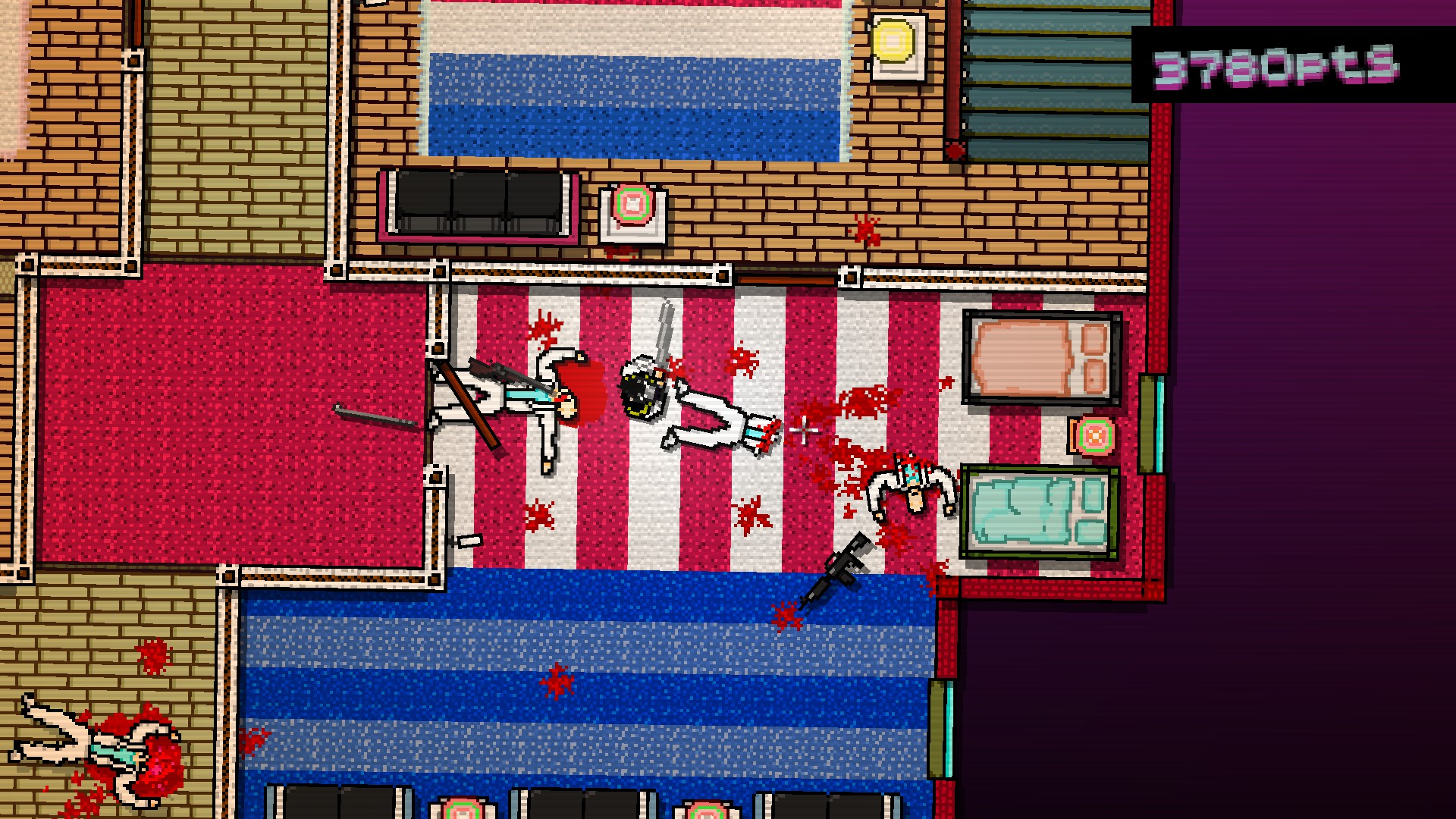 Indie Game: The Movie has inspired a trend of pixel graphics being a trendy thing, from Super Meat Boy to Fez. Hotline Miami is no different, however I tend to feel that its style is lazier than an appealing aesthetic. While it is true that the game provides a provocative variety of bright neons as is appropriate for the 80’s, I felt that may of the sprites were unnecessarily rough on the edges. For example, in the screenshot above, some elements are sharp, such as the doors and the staircase. Other sprites, such as the player-character and the enemies are distinguished enough to recognize, yet the former are also cookie-cutter generic. I also find the background items too banal remembering greater detail in games like Zombies Ate My Neighbors. Overall, I find the graphics in Hotline Miami to be akin to something seen on the Game Gear

Hotline Miami is just long enough so that one feels that they are getting their money’s worth, just short enough so that the mechanics do not become repetitive, and difficult enough to remain stimulating. Overall, Hotline Miami is a fun game if one can not only stomach the explicit depiction of sprite-based humans popping like balloons on the screen, but also overcome the moral dilemma of finding pleasure in killing—an important plot device in the game itself and a modern game industry topic of interest taken up in a similarly visceral game released in the past few years. 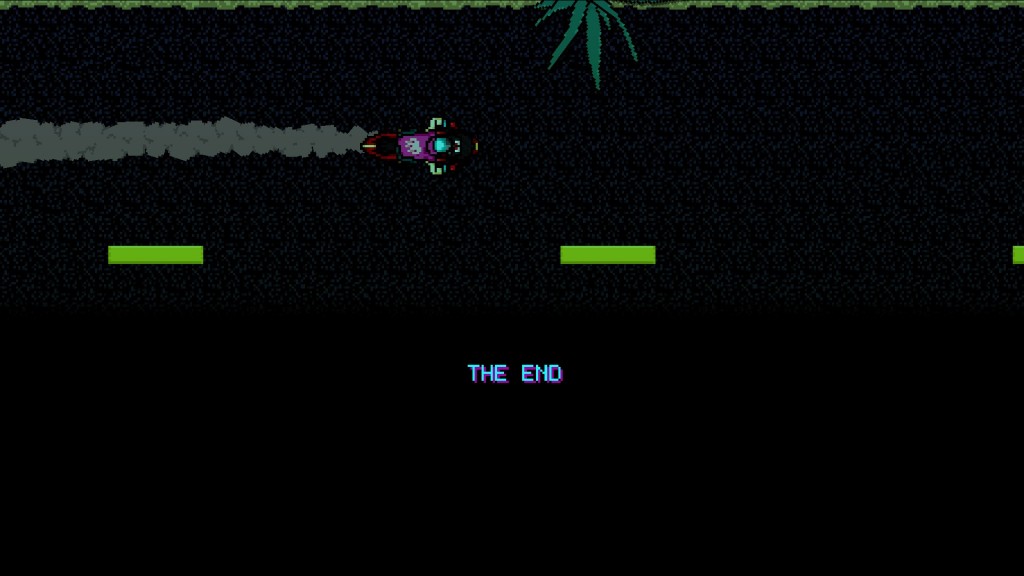 Hotline Miami is the kind of novelty game that will occupy one's interest for a time long enough for completion, but piling bodies up to the ceiling and painting rooms red with bodily fluids is fun only up until the enchantment of quality controls, rhythmic soundtrack, and grotesque objectives fades.