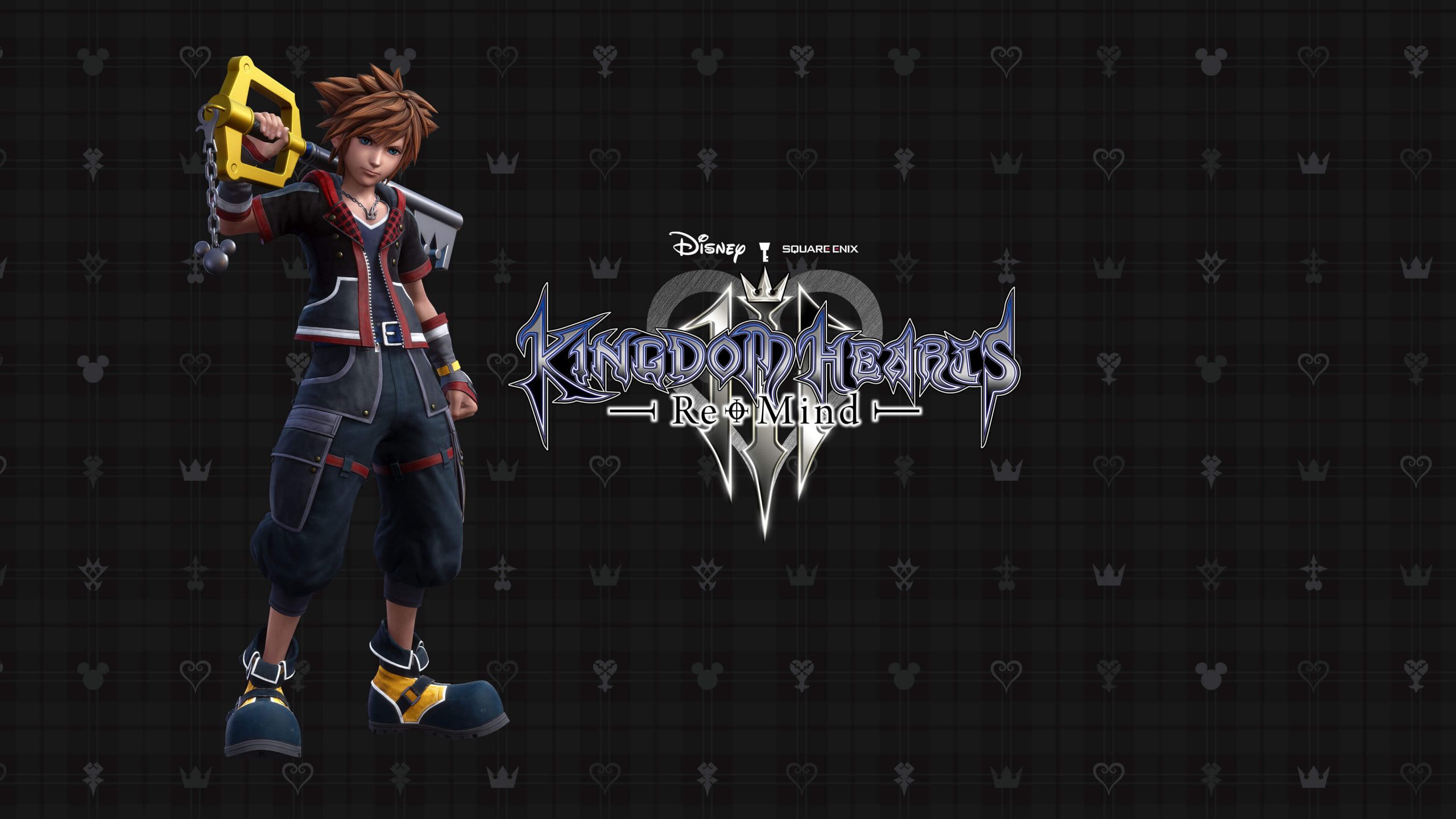 Kingdom Hearts III was easily one of the most anticipated games of last year. Since the original release of Kingdom Hearts II on the PlayStation 2 in 2005, fans anticipated the arrival of the franchise’s next main installment for many years. Finally after fourteen years, two console generations, and countless spin-off games, Kingdom Hearts III arrived in January of 2019. The game was received generally well by fans but was criticized for being a bit underwhelming—though to be fair, a fourteen-year wait for a game will inevitably generate incredibly high expectations. I personally enjoyed my playthrough of Kingdom Hearts III even if I found it a little lacking in its story and the difficulty of its combat.

While I personally consider Kingdom Hearts III to be the weakest of the three mainline games of the franchise, I was excited when downloadable content (DLC) was announced and eagerly awaited to see what it would add to the game. Kingdom Hearts III Re:Mind is divided into three major sections that each present a very different experience for the player, each of which I will cover below. 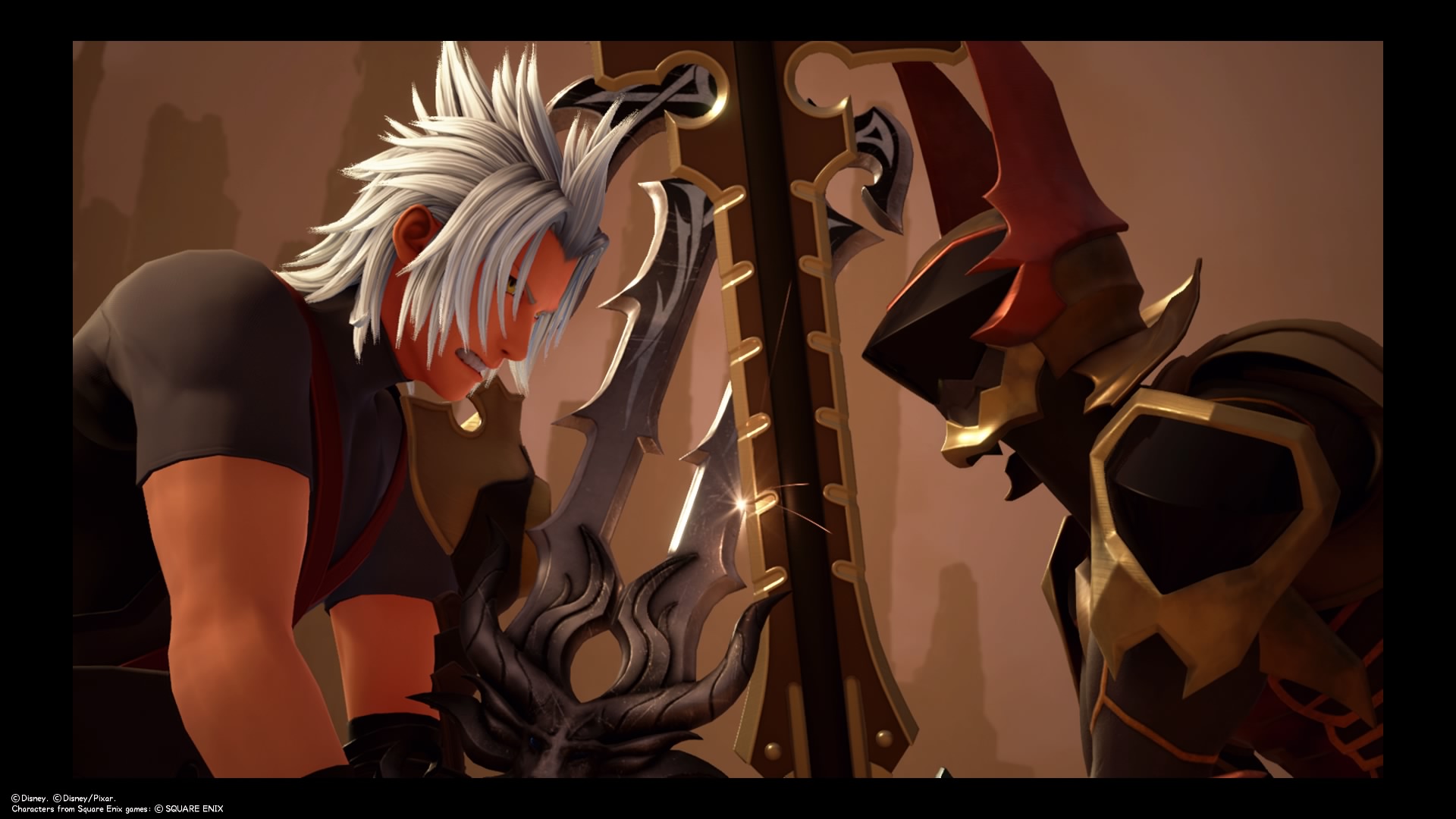 Violence: As is standard for the Kingdom Hearts franchise, enemies explode into black smoke when defeated. Characters grunt and cry out in pain when struck or killed.

Spiritual Content: As with the other games in the Kingdom Hearts franchise, there is much talk of the nature of the human heart and its relationship with light and darkness. Characters use magic in battle.

Positive Themes: Re:Mind contains an overarching theme of self-sacrifice and is a story of far one might go in order to save the person that they love. 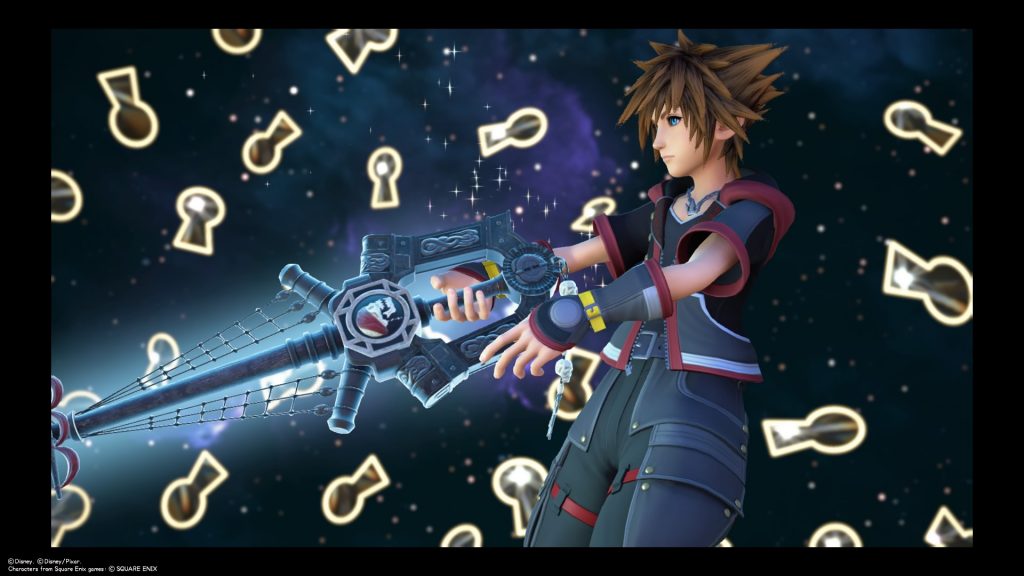 Re:Mind is the core segment of the DLC and it follows the story of Sora seeking after the lost fragments of Kairi’s heart by traveling back in time to the events of the climactic battle of Kingdom Hearts III. The climax at the Keyblade Graveyard was my personal favorite part of KHIII so I was more than ok with revisiting it. While the player is largely replaying the same levels and boss battles in this segment, the DLC allows the player to play as characters that were previously unplayable in these fights. This can be seen as somewhat hollow fan-service since the boss battles themselves are unchanged, but the boss battles are still a lot of fun and I personally will never turn down the opportunity to play as Roxas dual-wielding Keyblades.

However, the game’s repetition can become excruciating at points, as the player is often forced to view the same cutscenes that were KHII with little-to-no changes. While these cutscenes can be skipped, I wish we had gotten new scenes and unique, freshly-recorded voice acting. As a side note, Christopher Lloyd was cast as Xehanort for KH3 Re:Mind because the previous actor, Rutger Haur of Blade-Runner fame, sadly passed away in July of 2019. While Christopher Lloyd is good in the role, his repetition of the exact same lines said by Haur in KH3 draws unnecessary attention to the recasting. Xehanort has so few new lines in Re:Mind that I honestly wonder why they didn’t just use scrapped lines from Rutger Haur instead of recasting him entirely, given how they kept the old lines for the other characters. 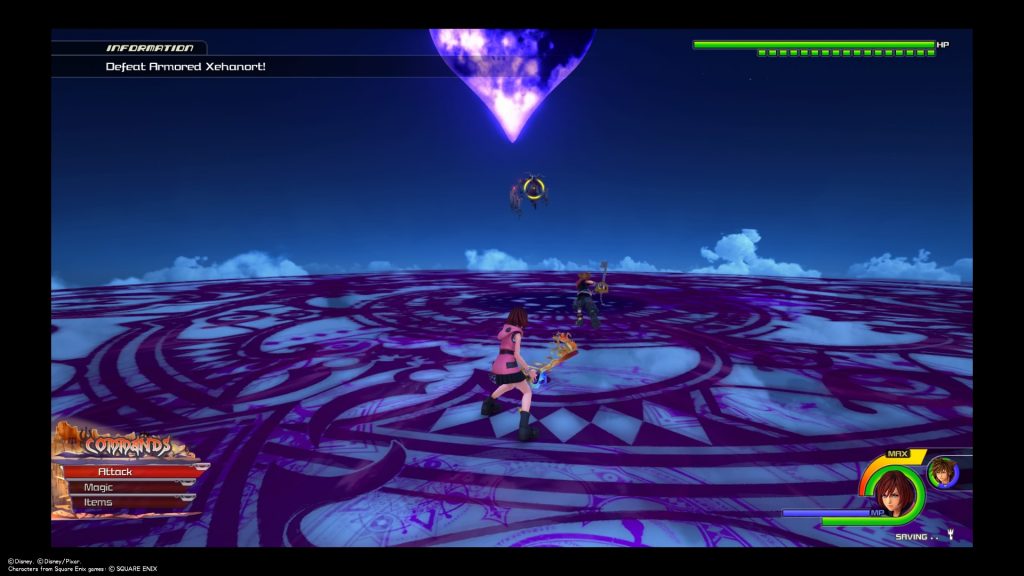 Playing as Kairi has long been a fan request and this DLC finally delivered!

While I enjoyed Re:Mind overall, it did raise a big question for me: why wasn’t this content present from the beginning? The Re:Mind segment of the DLC doesn’t add any new world or environments, so it would not have been difficult to add these segments in. Additionally, much of the cinematic content exists to fill in story gaps present in KH3’s main story. Why weren’t these gaps addressed in the base version of KH3? The optimistic side of me suggests that these were legitimate oversights that the developers are now addressing, while the cynical side of me suggests that his content was deliberately held back in order to charge players more money. Given Square Enix’s history with the Kingdom Hearts franchise, I could easily see either being a possibility. 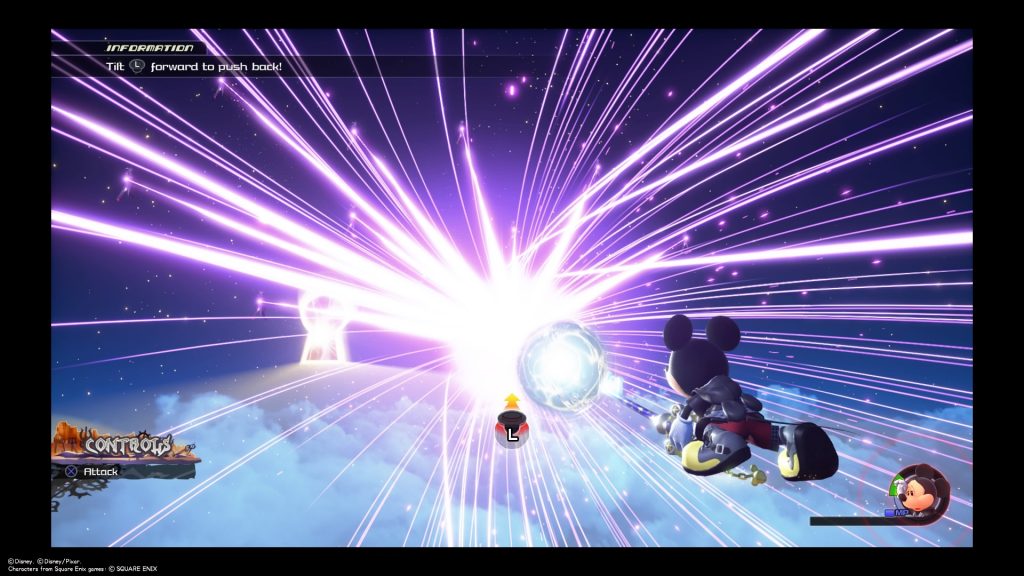 Never thought I would want to play as Mickey in an Dragonball Z beam struggle! 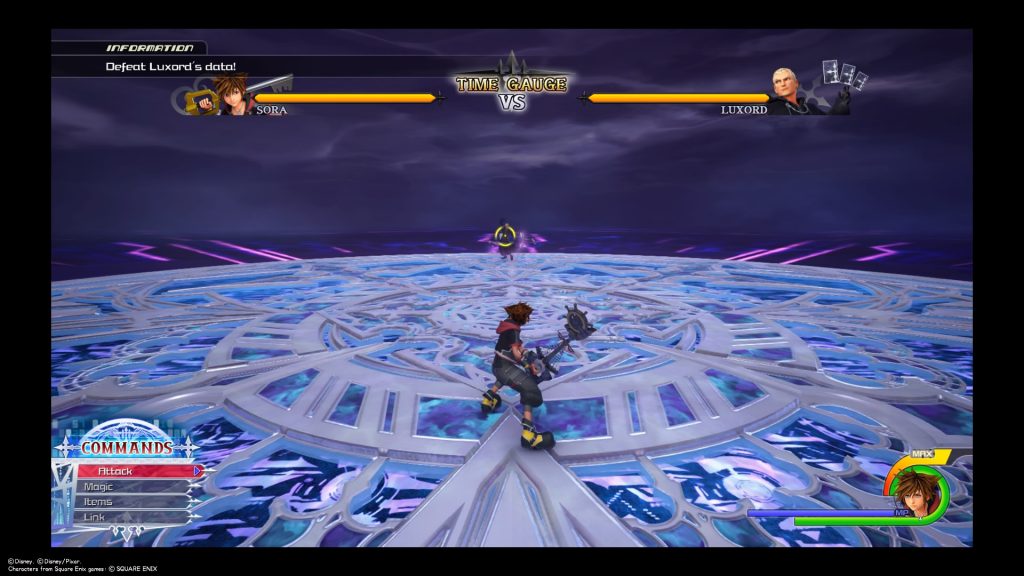 By far the most entertaining part of the game is the segment titled “Limicut Episode” (I have no idea why it is called that, but anyone familiar with the Kingdom Hearts series knows that the titles often make little sense.) This segment is a boss room reminiscent of the one present in Kingdom Hearts 2.5 Final Mix. There are thirteen bosses that were present in Kingdom Hearts 3, however with significant boosts to both their attack power and health. These bosses present a level of challenge that was severely lacking in Re:Mind as well as in Kingdom Hearts III as a whole. Defeating these thirteen bosses is a significant challenge and will require you to go back and grind a bit in order to reach a high enough level. I played on the “Standard” difficulty for the Limitcut Episode at level 56 and even then it was a pretty tough challenge.

Once the player defeats the thirteen bosses, the game opens up a doorway to the final secret boss fight. This is easily one of the most difficult bosses to beat in the whole Kingdom Hearts franchise, and this is a franchise known for ridiculously difficult boss battles. You most certainly have to be maxed out at level 99 in order to beat this boss, and getting to this level takes a great amount of time. Should the player be one of the few able to beat this boss, they will unlock a secret cut-scene that most certainly provides hints as to the story of the next Kingdom Hearts game. 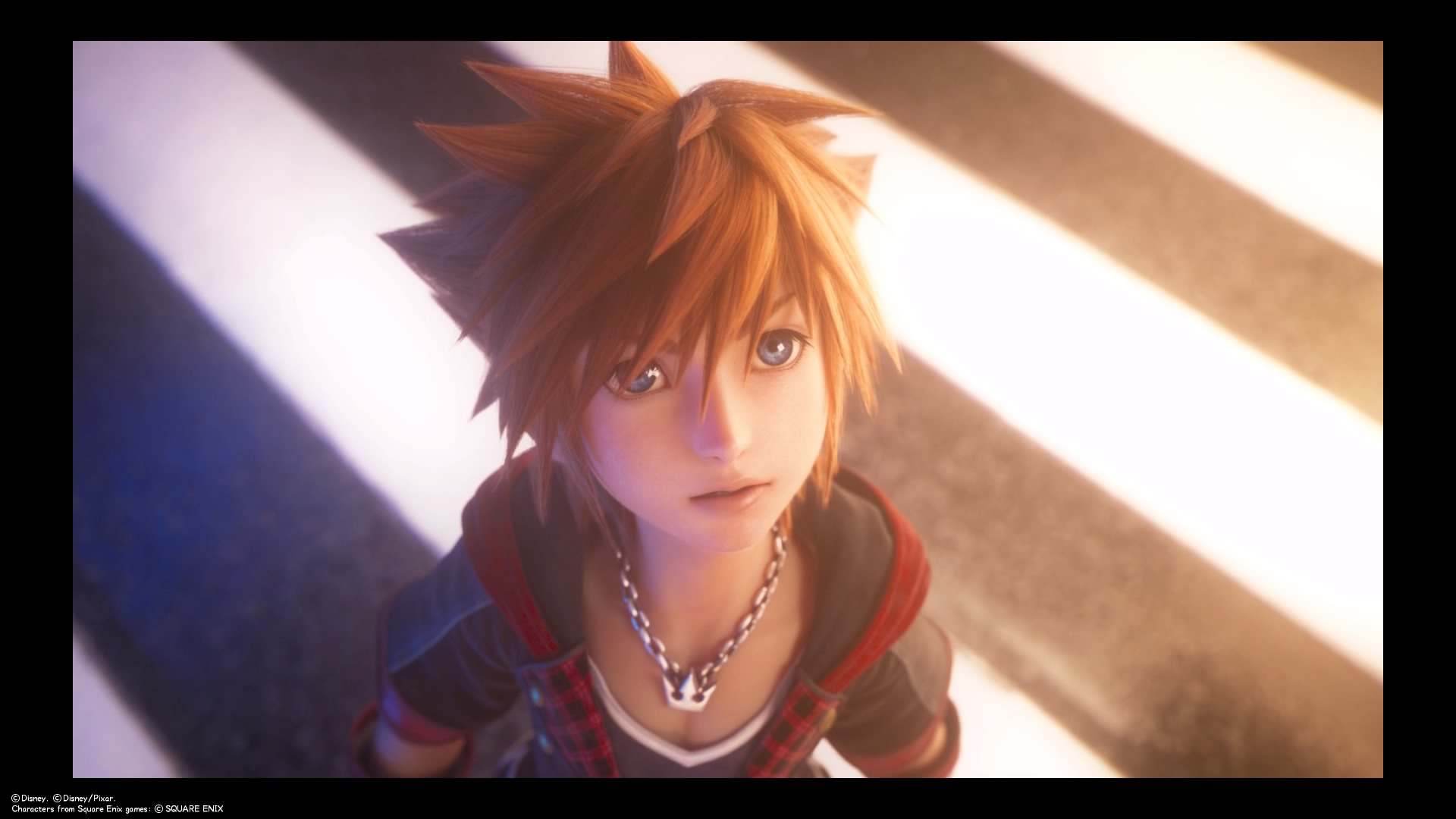 The Limitcut Episode, while easily the most entertaining part of the game, also begs this same question because the hall of secret bosses was first used in the KH2.5 Final Mix which was released back in 2014. The biggest difference here however is that this content was present in the base game and required no DLC. Why should players be expected to pay extra for content that didn’t require an extra payment in a previous game in the series?

These problems should be cause for concern among Kingdom Hearts players. They are not a far cry from the micro-transactions and paywalls used by other large game developers in the past few years, practices used and abused frequently enough that players have become accustomed to settling for incomplete products. I do hope that this is not a warning of things to come as the Kingdom Hearts franchise continues.

Finally, the DLC also comes with two other pieces of content called Data Greeting and Slideshow respectively. Data Greeting allows the player to take photos with the in-game camera of various characters and environments that the player can pose and manipulate. The Slideshow then allows these images, as well as those taken within the game itself, to be compiled into a slideshow presentation. There is not much to say about this content other than that it is amusing if not a bit underwhelming. Personally I have never considered the possibility of adding a photo-mode to Kingdom Hearts as taking memorable screenshots has never been that important to me. That being said, the Kingdom Hearts fan-base has really run with the Data Greeting to hilarious effect. A quick search online will reveal many funny images that fans have created with the characters. Below are a couple that I created simply for the fun of it. 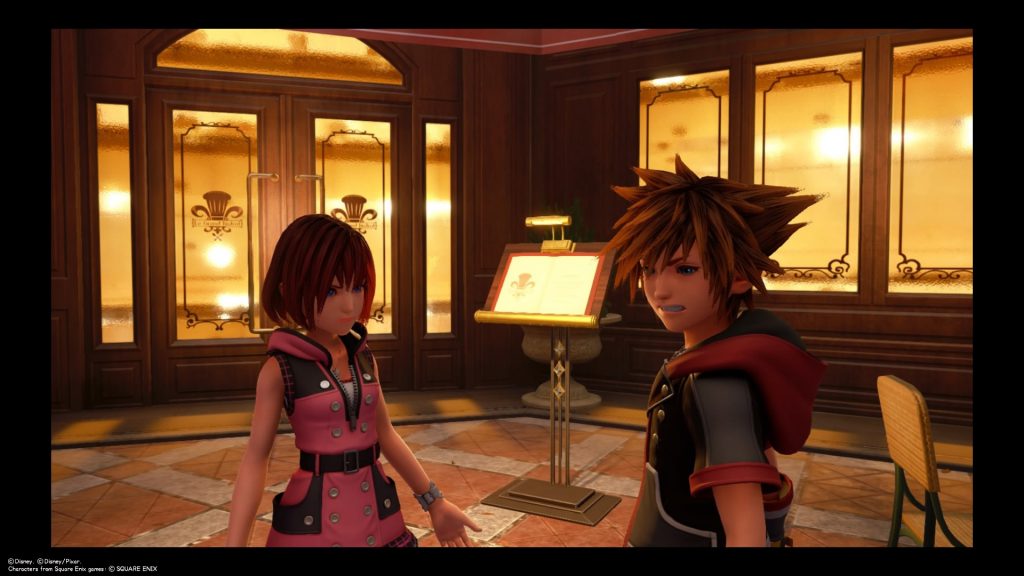 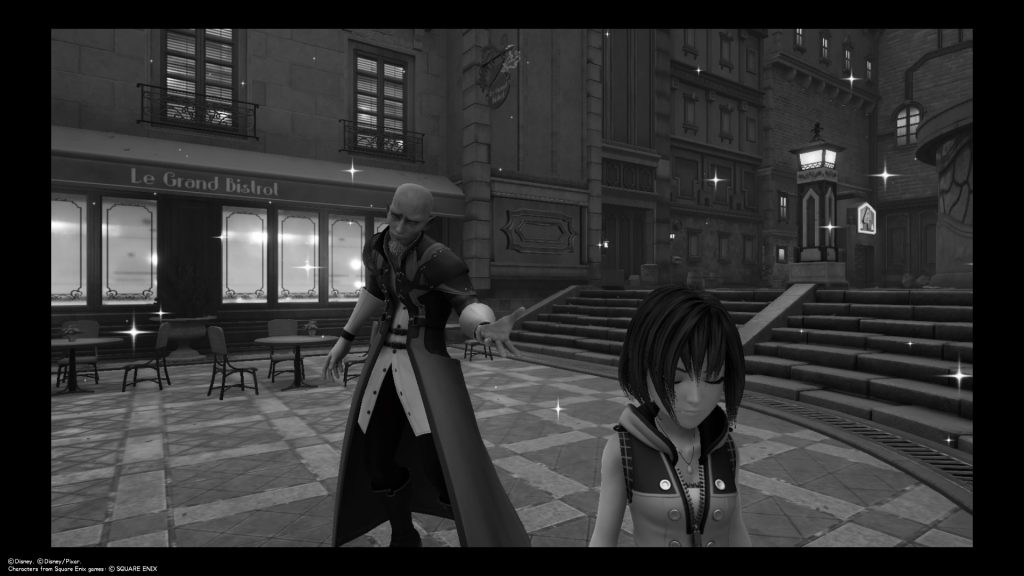 As a whole, Kingdom Hearts III Re:Mind is a decently fun but short experience. The animation is as gorgeous as ever and if you enjoyed the game-play of KHIII then you will enjoy the combat in this as well. While much of the story and environments are recycled from KHIII, the new playable characters and boss fights make the playthrough worth it. The best analogy I can think of to describe Kingdom Hearts 3 Re:Mind is one of the virtual reality booths you may see at a shopping mall. You are enjoying the ride but it seems to end very quickly after it begins. As you walk away, you can’t deny that it was too short and a bit overpriced, but you also can’t deny that you did have some fun.

Kingdom Hearts III Re:Mind offers challenging boss-fights and fun moments of fan-service, but suffers from its brief length and lack of new levels.