Review: Scott Pilgrim Vs. The World: The Game Complete Edition

Since the original game released in 2010, Scott Pilgrim fans have been head over heels for the pixelized beat ’em up action. Tragically, the game was delisted from both the Playstation Store and Xbox Live Marketplace in December of 2014 but thanks to its devoted fan base—and even some tweets from creator Bryan Lee O’Malley and the film’s director Edgar Wright—a Complete Edition remaster was finally announced in September 2020, shortly after the game’s 10th anniversary.  After a brief hiatus, Scott and the band are finally getting back together to kick some butt!

Violence: As it’s a side-scrolling beat ’em up Scott Pilgrim The Game: Complete Edition features a heaping helping of bruising violence. Alongside your standard punches and kicks, characters can bludgeon, slash, and smash enemies to death with a variety of items scattered around the environments.

Sexual Content: Some of the outfits for certain characters are a little skimpy. Also, one of Ramona’s exes is another woman.

Spiritual Content: Throughout his journey in the comics, film, and game, Scott comes to terms with his own insecurities and failures in his life and relationships, and literally has to fight his own inner demon, Nega (Negative) Scott. That’s about the extent of any spirituality.

Alcohol/Drug Use: There are some concert and party scenes with red cups, presumably filled with alcohol, but nothing much else beyond that in the way of alcohol/drug use. 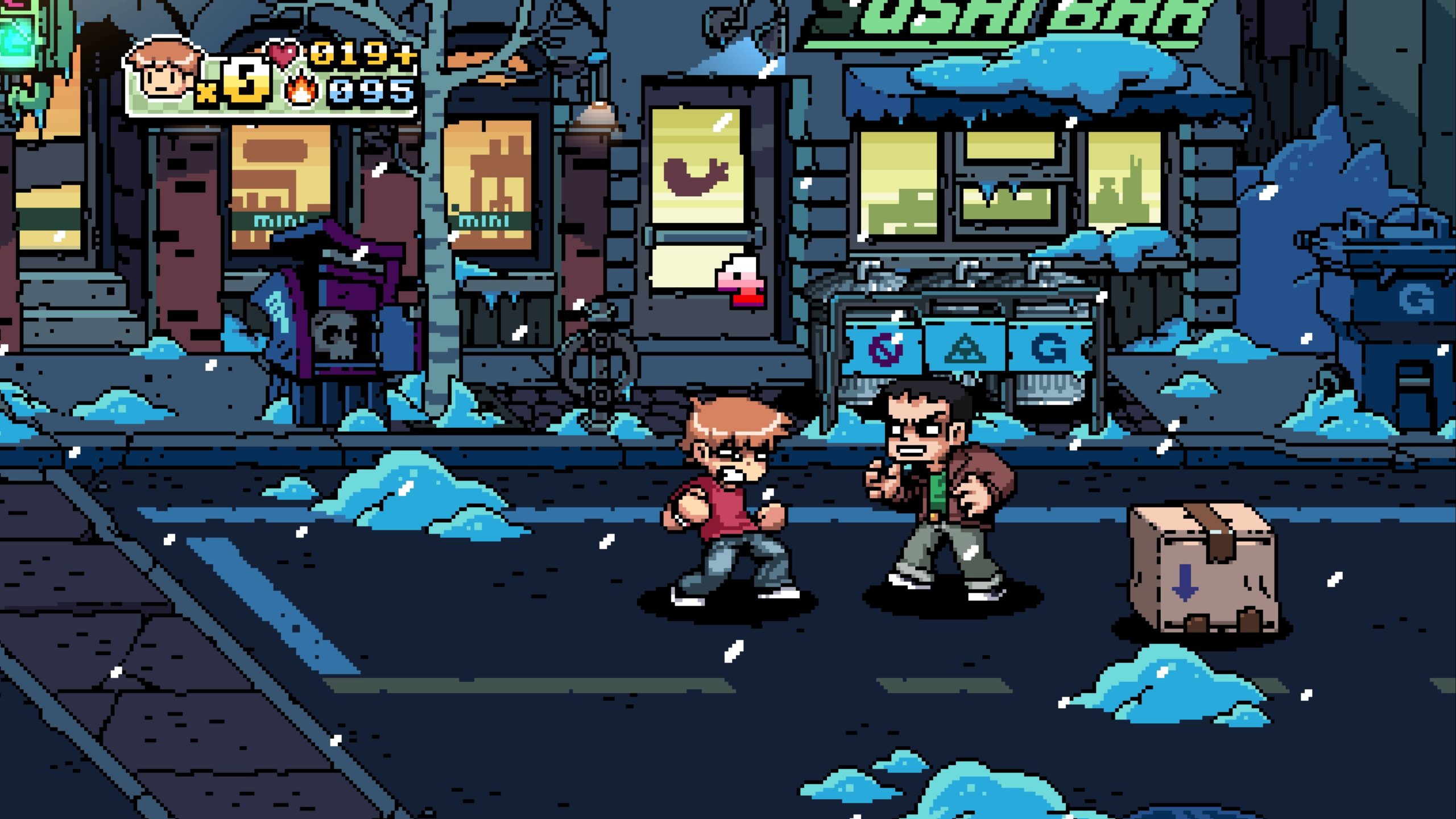 It’s finally back! After almost 11 years, Scott Pilgrim Vs. The World: The Game Complete Edition has finally been re-released for a new generation of gamers and consoles. Available on just about every platform under the sun, longtime fans who were disappointed when the original game was delisted back in 2014 can finally jump back in for some band battling, guitar smashing fun.

The game follows the plot of the Scott Pilgrim series of graphic novels, on which the movie (of the same name) was based. It sees protagonist Scott Pilgrim, a bumbling bassist in his up-and-coming band, falling for his dream girl Ramona Flowers. The catch is that, before they can date, he must literally battle to the death with her 7 Evil Exes. Along the way, he learns to love himself in his pursuit of true love and earns the power of self-respect and a few 1-Ups. This sets up the frantic yet nuanced brawler gameplay. 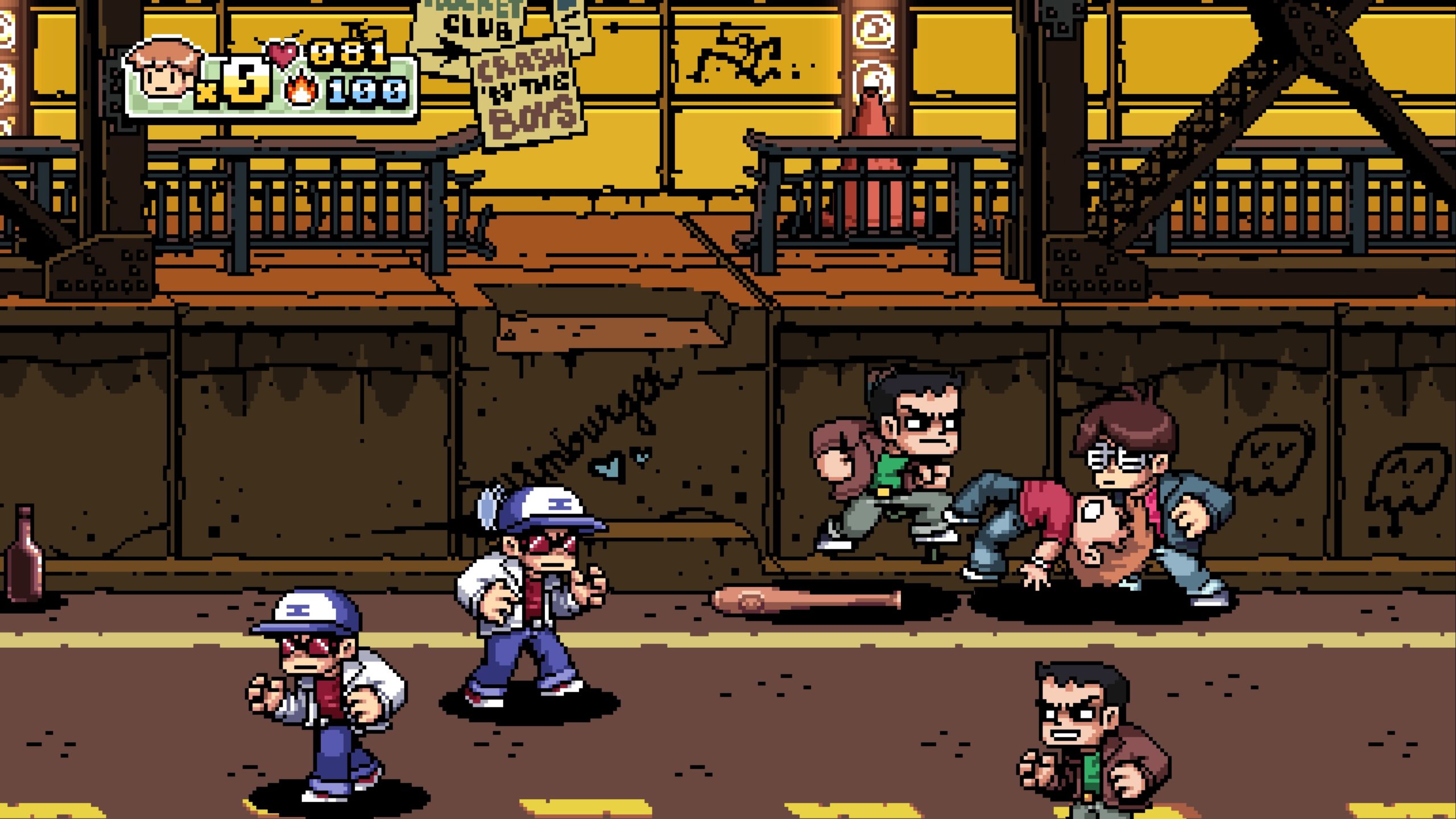 Unlike a lot of beat ’em ups, Scott Pilgrim Complete Edition allows players to level up and unlock new combat abilities and combos over time. That’s a good thing, too, as the difficulty can be absolutely grueling when playing solo. Luckily, each character has a few tricks up their sleeve. Scott can summon a companion, such as Knives Chau (who is also a playable character), to assist in combat by smoke bombing enemies. Each fighter also has a special move mapped to R1 to help dish out some major damage. When playing co-op, players can even throw enemies back and forth for an impromptu game of catch.

Speaking of which, there are a few little mini-games included in the Complete Edition which were originally DLC add-ons for the initial release back in 2010. These include a zombies mode, where Scott and friends beat the puss out of the undead, as well as a dodgeball mini-game where friends can compete to see who can dodge, duck, dip, dive, and dodge with the best of ’em. 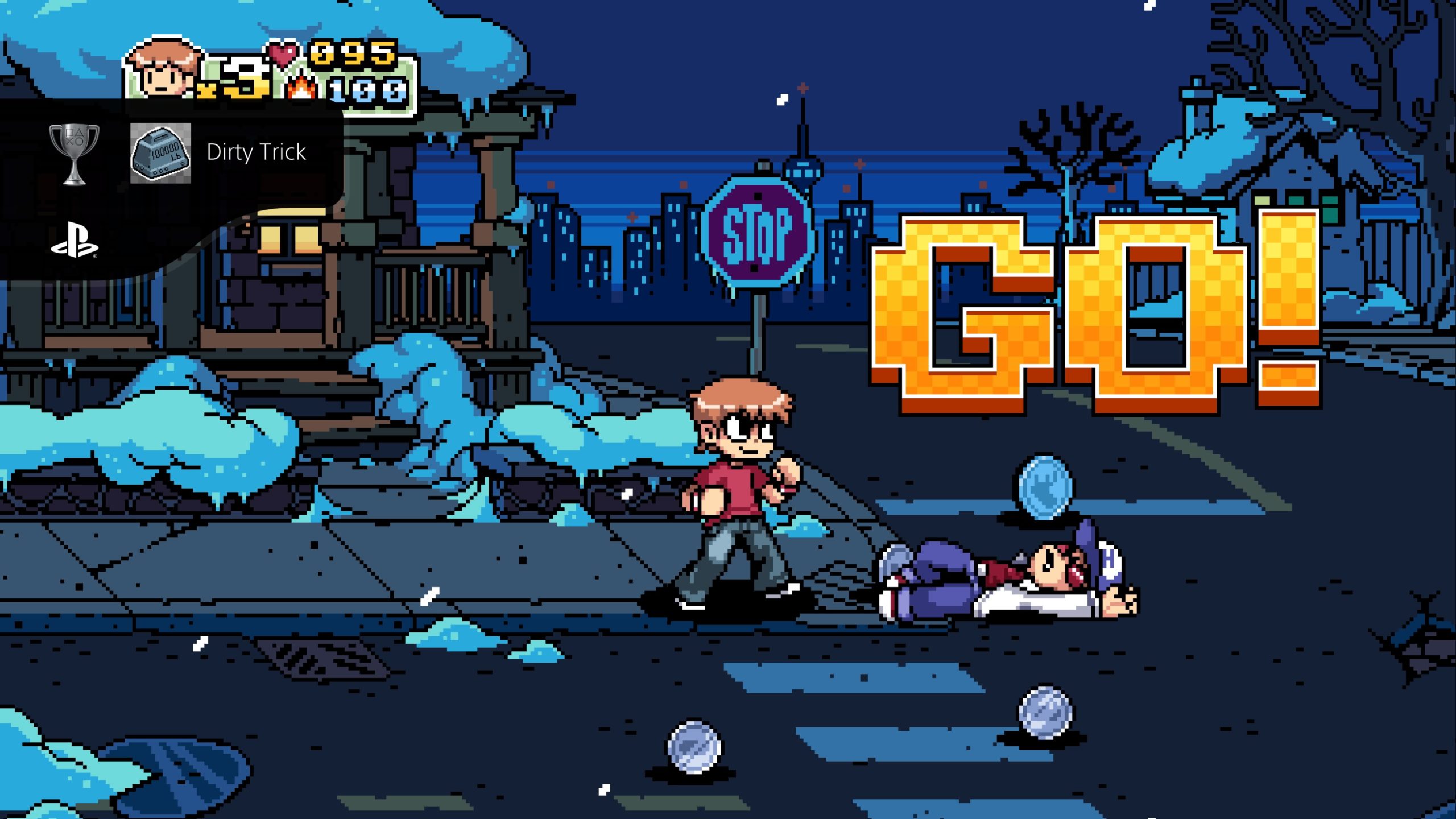 Throughout each level, players can find stores, food trucks, and other vendors who sell stat upgrades and food to replenish HP. There is even a hidden shop in each level which is run by Scott’s best friend and roomate, Wallace Wells. This can be awkward at times as Wallace is also a playable character, and so meeting his doppelganger for the first time can be a bit jarring. At the end of each level, players will face off against one of Ramona’s evil ex-boyfriends. Each of them has a different theme and power set which is somewhat specific to their level. For example, Lucas Lee, Ramona’s second evil ex, is an action movie star and professional skateboarder. Here the enemies battle Scott and friends across various movie sets wielding video cameras, tripods, rocks, and other movie equipment and props. Foes zip by on skateboards eager to knock Scott off his feet. But if one can manage to land the first blow, Scott himself can wield these boards as a weapon.

All in all, not much has changed from the original release. The key difference is that this re-release bundles all of the DLC content into one package with online multiplayer (which was also an add-on for the original). Everything fans loved about the original game is here and as a bonus can be played on the brand new PS5 and Series X/S consoles via backwards compatibility. Nostalgic players and fans of the movie and graphic novel should pick this up as a fun romp with friends and a flashy stroll down memory lane.

Scott Pilgrim Complete Edition is the definitive version of the beloved game that debuted two generations ago. This time, online multiplayer further enhances the fun as players can bring in three buddies to bash baddies and get the girl!