Review – Sakuna: Of Rice and Ruin

When I first saw the trailer for XSEED’s newest platforming action-RPG, I was enamored. The vibrant visuals and cute art style mixed with on-screen action to form an enticing dance I couldn’t help but feel drawn to join. What Edelweiss actually delivered is considerably more complex and, at times, far more difficult than I was anticipating. It will likely find a niche audience, but I’m not sure it has the staying power I was hoping for. 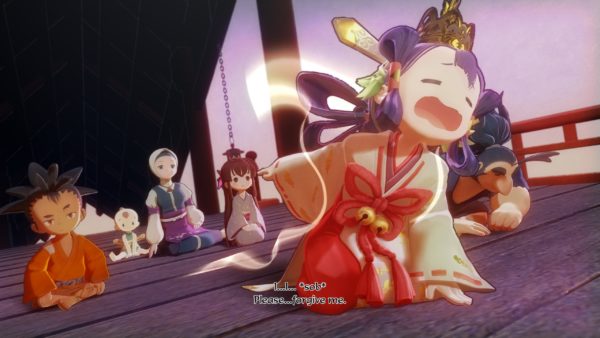 Spiritual Content: Sakuna is intrinsically religious as it’s based on a fictional deity. The game is full of historically Japanese demons and monsters.

Violence: While the game is full of cartoon violence, there is no gore to speak of. This is no more violent than a Saturday morning action cartoon may be. 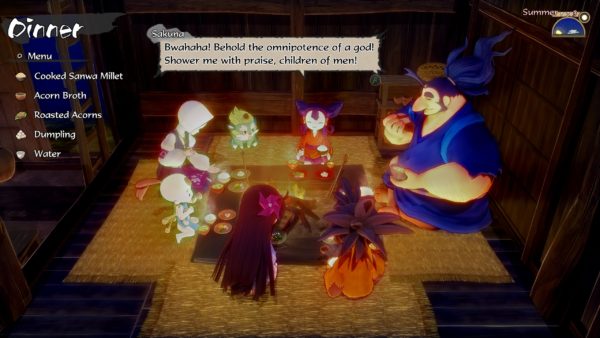 Drugs and Alcohol: There are feasts with plenty of drinking. Sakuna, who appears to be a child but is actually a long-lived deity, is a rampant drunkard at the beginning of the game. The game has alcoholic beverages in it.

Language/Crude Humor: While I personally don’t recall any foul language, I wouldn’t be surprised if there was some minor profanity. There is a fair deal of joking around and some of it may be seen as off-color depending on your background. For instance, at one point Sakuna jokingly (and seriously) says something akin to, “I am a god. Worship me, humans!” Jokes like that could potentially offend people of Christian faith.

ESRB: Teen for  Fantasy Violence, Mild Blood, and Use of Alcohol 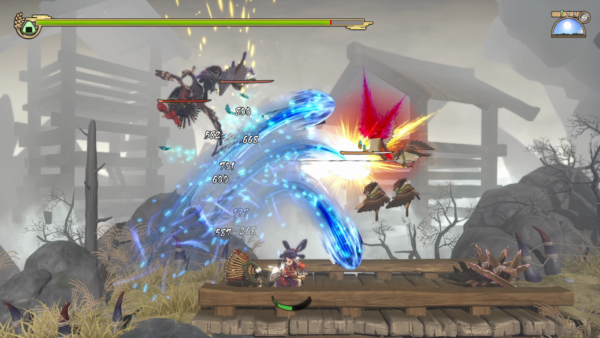 Sakuna is a high-and-mighty goddess that doesn’t mind telling everyone around her about it. When some humans wander into the realm of deities to gorge themselves on a storehouse full of grain dedicated to a senior deity, Sakuna takes it upon herself to run them off. While trying to scatter the humans she accidentally sets the storehouse on fire, ruining an entire year’s harvest dedication. The senior gods punish her by forcing her to accompany the people back to the human realm where she’ll have to hunt and grow rice to replace what she’s lost.

While the story itself feels in line with traditional Japanese fare, Sakuna‘s narrative and characters are likable. From the big, dumb oaf and his wife to the children and a few other various visitors, everyone feels fleshed out. From spoiled brat to hard-working friend of the common folk, there’s a very sincere progression to Princess Sakuna’s character development. It’s a fun story with some heartfelt moments along the way. 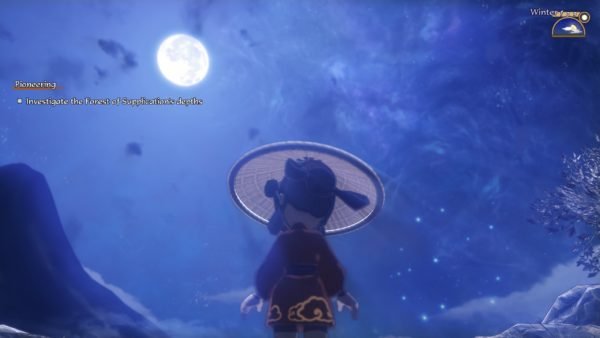 With regards to gameplay, Sakuna: Of Rice and Ruin has a bit of an odd dichotomy. On one hand, you’ll be traversing 2-D levels, fighting monsters, and collecting materials as you explore. The combat can initially feel a little lackadaisical as you continue swinging your blades long after passing up enemies. Once I got used to the momentum of Sakuna’s combat, though, I had a great time. The on-screen action feels impactful, providing adequate feedback for solid shots landed on foes. Outside of combat, you’ll have the opportunity to upgrade gear and activate special traits on equipment. This provides a sense of meaningful progress beyond basic numbers.

The second half of Sakuna‘s gameplay, and arguably the harder sell, is a rice farming simulator. Yes, you heard that right. Edelweiss is basically teaching players how traditional Japanese farmers grew rice. From tilling the soil to planting, weeding, harvesting, and hulling the rice, you’ll have to painstakingly care for each phase of rice farming. While the farming seemed interesting at first, it quickly became tediously repetitive. Given the narrative premise for why Sakuna was sent with the humans in the first place, I understand the need to have her raising crops, but there was no need to make the task so monotonous. I mean, threshing the rice is a thee-command input per stalk, and you may have a few hundred stalks in a single harvest cycle! 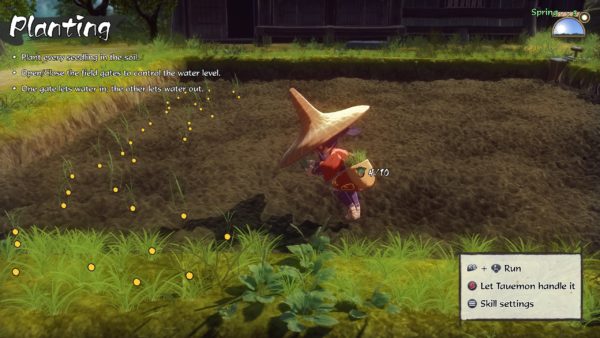 To the game’s credit, Sakuna’s prowess with each step of the farming process grows so she can do more with a single action—harvest 3 rice stalks instead of one per swing of the sickle, for example—and you can often have the humans on your farm handle some of the tasks, but the NPCs produce low-quality work, and rice farming is a major game component.

In regards to Sakuna‘s two systems working together, the game has a time cycle which, frankly, feels like it works against narrative pacing. You can do platforming levels and explore during either day or night, but monsters become orders of magnitude more difficult when the sun sets. On top of that, Sakuna has a hunger meter you’ll have to tend to. Once she becomes hungry, you’ll no longer regenerate health and you’ll have to return home for the daily family meal. While they use the family meal to increase your stats (based on the food prepared) and move the plot forward, it can be irritating to burn through a handful of levels and then have to go home to refuel. It can also be frustrating to secure components you need to build equipment and rush home, only to realize you’ll have to wait through another entire night cycle to have it created because it was too late in the day when you finished the level. 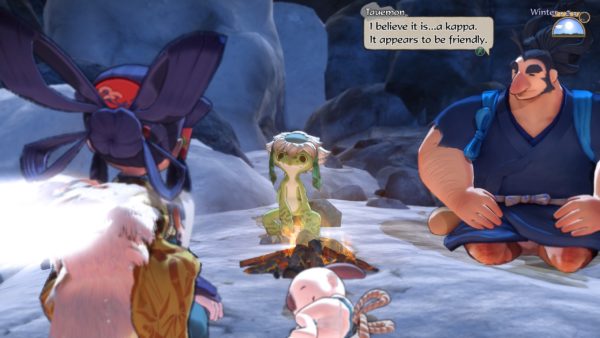 Sakuna suffers from substantial repetition. Let me say that again. Sakuna suffers from substantial repetition. While you’re exploring or gathering components for upgrades, you’ll be left playing the same selection of levels every day. When you finish levels you’ve already played, you’ll be able to play others you’ve already played until Sakuna gets hungry. Then you’ll go home, eat dinner with the family, tend to the farm, sleep, and do it all again. Story progression and completing objectives keep new places coming at you, but if you get stuck on a boss you can’t beat, you’d better be prepared to grind.

Finally, I feel like I need to address the game’s default difficulty. While the standard difficulty feels good for normal exploration and exceedingly dangerous at night, boss battles could feel nearly unconquerable. I had no issues with combat until I hit one of the first major bosses. After I spent several hours fighting it (the fight blocks story progression) I finally got fed up enough to lower the difficulty—an act I’m typically loathed to do. With the lower difficulty, I still find Sakuna to be an enjoyable action platformer with fun boss fights and set pieces. 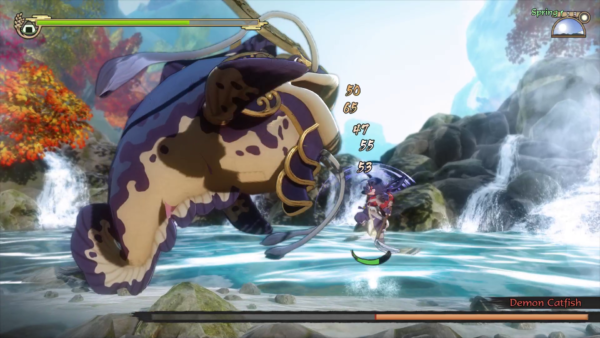 Sakuna: Of Rice and Ruin is a gorgeous video game, full of beautiful sets and boasting cute character design. The art style is downright stunning at times; it feels like I’m playing a game in a vibrant, fluid anime. The game’s voice acting is great, too. Unfortunately, while the music fits the setting, I quickly turned it down as it became, like many other elements of the game, repetitive and samey. 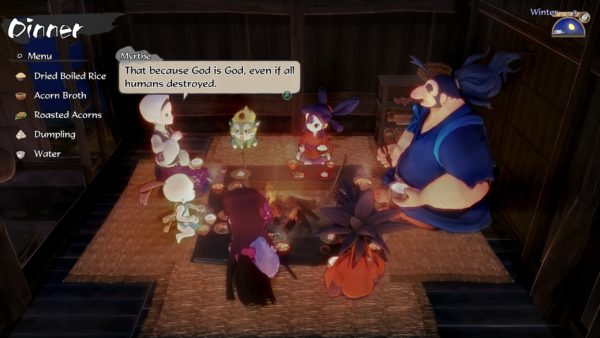 At the end of the day, after you’ve finished the tedious farming, Sakuna is a fun game with some glaring flaws. It’s gorgeous, the story is fun, and the 2D combat and exploration are fantastic. While rice farming was an interesting aspect of the game, it’s fairly uneventful and repetitive, an issue I found to be the case for far too much of Sakuna. The default difficulty can also feel downright brutal at times. There’s certainly a good time to be had with Sakuna: Of Rice and Ruin, but it will take the patience of a rice farmer to get you there.

Sakuna: Of Rice and Ruin is a fun, cute action platformer bogged down by unnecessary repetition and tedious farming mechanics.