Almost two years have elapsed since SNK’s original announcement that a reboot of the famous Samurai Shodown series would come to consoles in 2019. Somewhere along the way, I caught wind that SNK would release a PC version to compliment the initial PS4 and Xbox One launches; our very own LJ Lowery reviewed Samurai Shodown on the former. Even the Nintendo Switch received SamSho! Meanwhile, PC gamers expressed apprehension in response to a well-circulated rumor concerning SNK turning down a distributor exclusivity deal for PC. In actuality, Samurai Shodown arrived to PC on June 11, 2020, courtesy of the Epic Games store.

This version of comes equipped with the Season 2 and Season 3 DLC packs as its main draw. At $49.99, the PC version is a bargain, considering the pricey season passes on PS4 and Xbox One; the $79.99 Deluxe Edition only comes with Season 1 DLC! Rejoice, PC fans, for your patience has been rewarded! 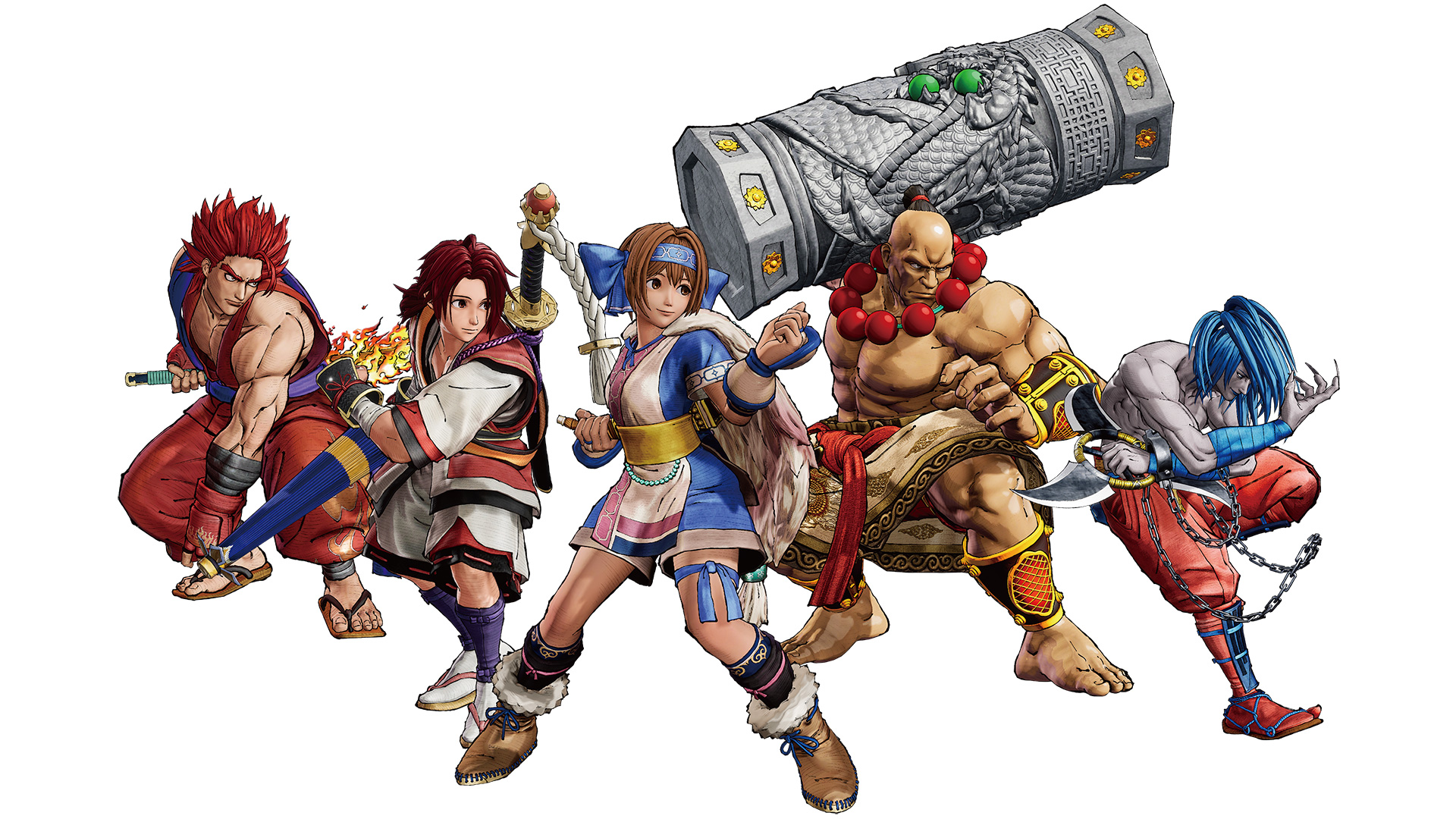 One of LJ’s main criticisms of Samurai Shodown‘s 2019 release was its small roster. All of the DLC has shored that up. Basura (SamSho III), Shizumaru (SamSho III), Wan-Fu (SamSho), Rimururu (in SamSho III, she is 17; this reboot reduces her to 14 for some reason), and Kazuki Kazama (SamSho IV) return! 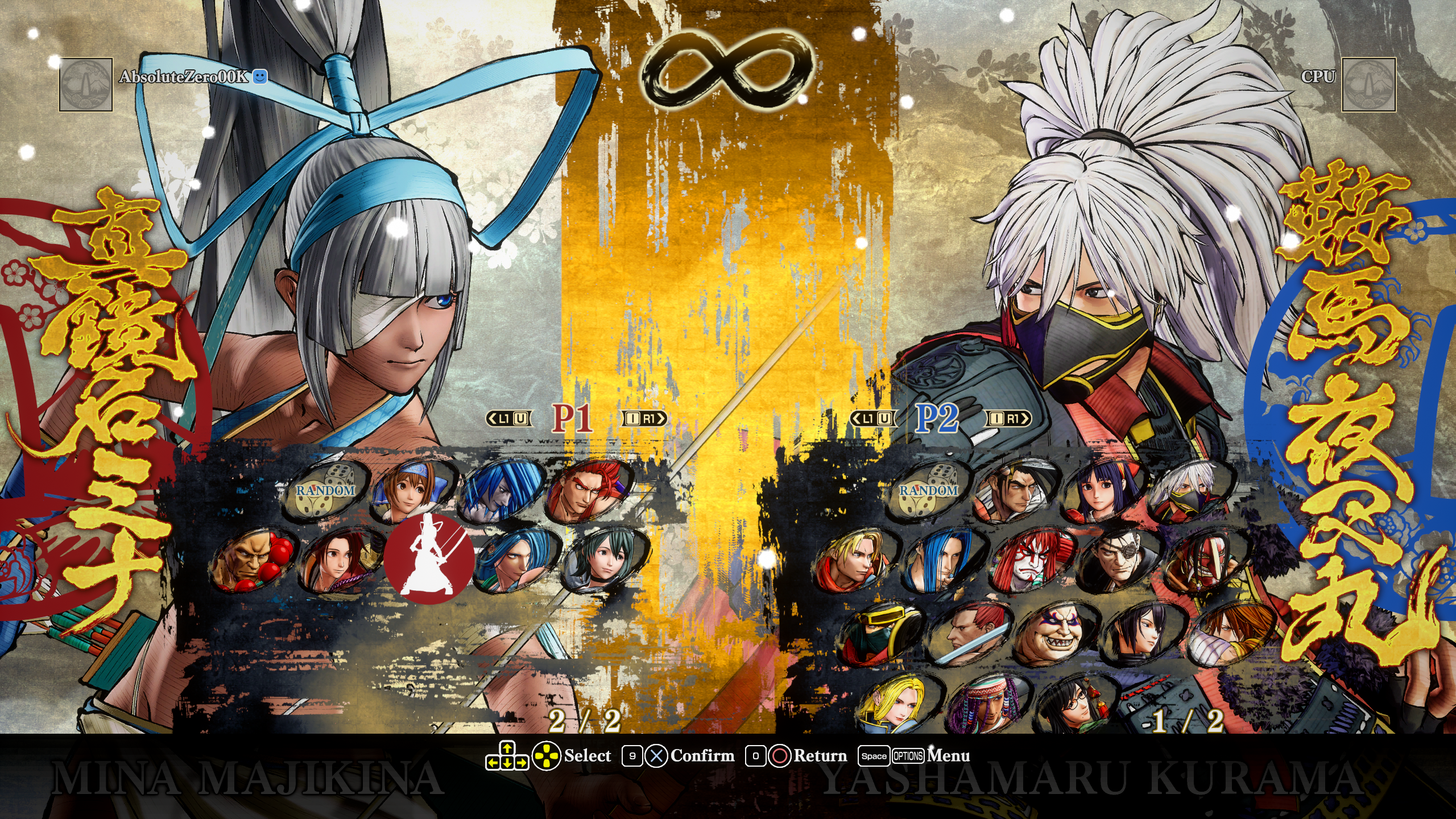 All the DLC characters are on “page two” of the character selection screen.

Compared to much of the other roster, Wan-Fu is underwhelming, and I can understand why he disappears and reappears throughout the series. He has one of my favorite Super Special Moves, which, except for the sake of balance, should be a OHKO as he meteor-smashes his opponent with his stone pillar.

Rimururu, Nakoruru‘s little sister in the lore, has a ton of special moves that seem to make up for her uunderwhelming normal attacks. Usually, one can use kicks to break down opponent defenses in SamSho, but the frames on hers are risky. It would be better to use her special attacks and face all the extra cuteness SNK has provided her.

Shizumaru’s Japanese anime ridiculous blood-spurting Super Special inspired me to try and create animated gifs so that I could show it off.

SamSho III‘s protagonist, Shizumaru Hisame, remains a fun character to play. His ability to float in the air with his umbrella is useful for spoiling opponent anticipation of a landing, and he can also attack while floating with it like Peach in Smash Bros. His charging special is great for wiff punishing, too. As seen above, his Super Special Move is very satisfying.

Basura is still one of my all-time favorite SamSho characters. SNK saw Namco’s Voldo from the Soul Calibur series and maxed out the weirdness, and it works! He has plenty of long-ranged attacks that keep him safe, a fake teleport that can force wiffs, and a command throw for the super turtles. He has everything a good character needs! 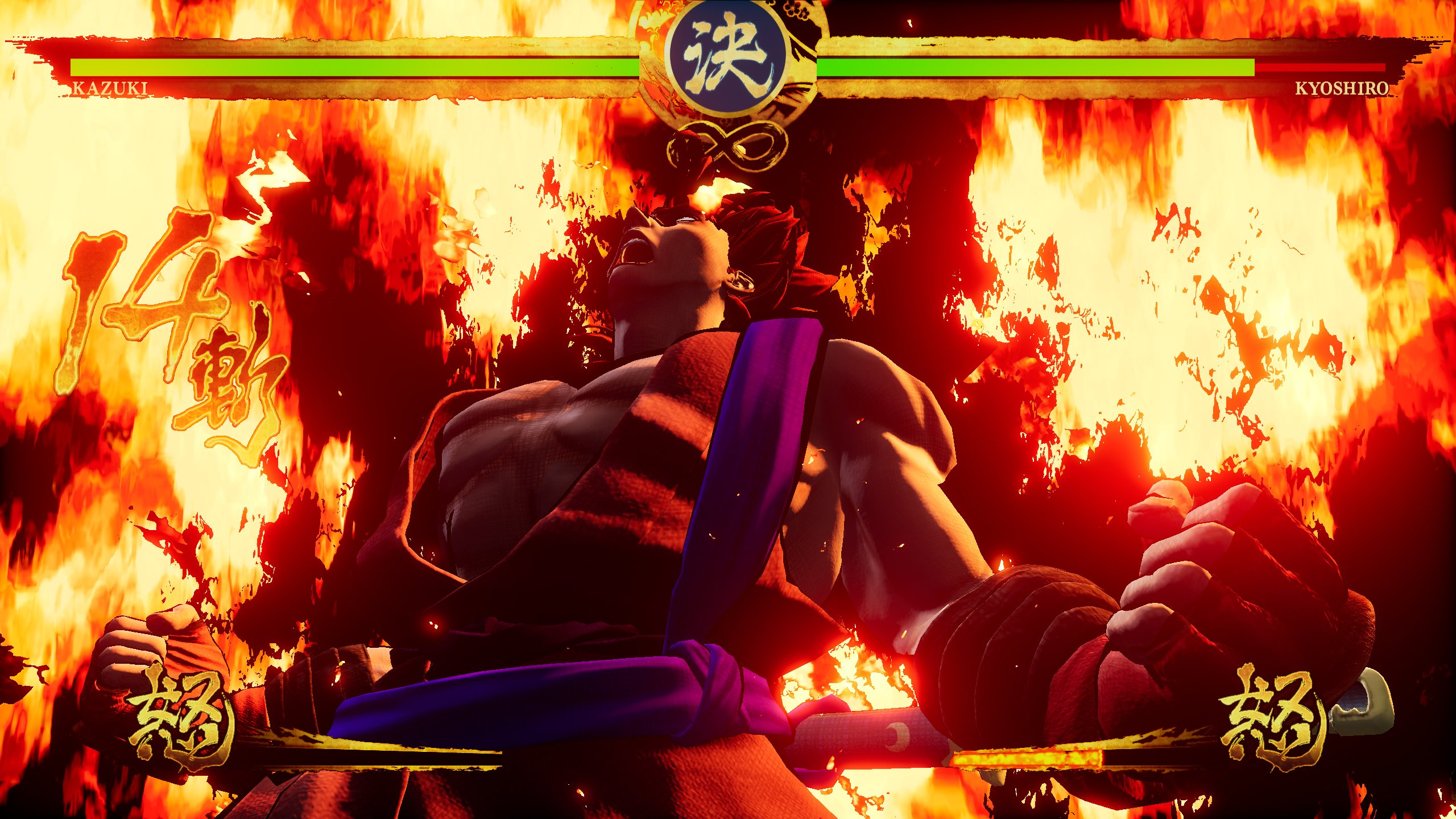 I think SNK wanted to capitalize on the popularity of DBZ with this Kazuki.

I like Kazuki Kazama more than his brother (see below). He comes with a traditional fireball, and has a versatile “self-explosion” that can be used against aggressive or recovering opponents. I love characters with command throws in this hyper-defensive game, and all of Kazuki’s special attacks can be charged and stored for extra power. He does lack a “dragon punch” for anti-air, though. 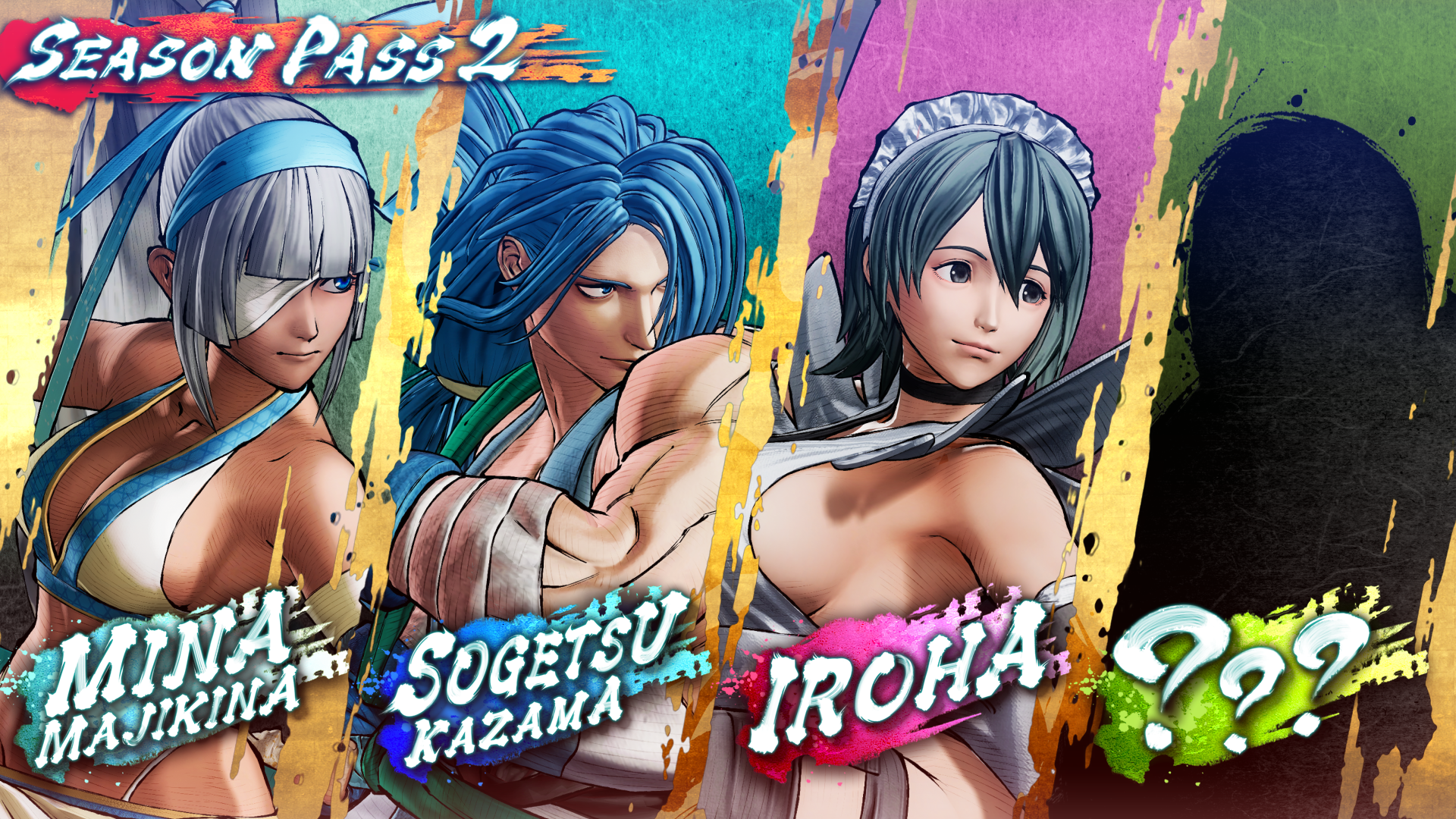 Season 2 characters are so new, they’re not even all here yet!

Mina Majikina (SamSho V), Sogetsu Kazama (SamSho IV), and Iroha (SamSho VI) round out the Season 2 DLC. Fret not, because when SNK reveals the final character, they will be available for free to those who own the PC version of Samurai Shodown.

Mina’s concept as an archer seems cool at first, but I find it strange that a bow seemingly without a blade can cut like a sword. It would also behoove Mina players to fight from full-screen distance given her ranged attacks, but who is going to allow her that space? Who is going to allow her to 3x charge her arrows? She does have a “leap” special move to get her in and out of danger, so I imagine the meta with her will be a game of cat-and-mouse. She also has an ability to re-quiver her arrow/cancel attack, but I do not find that more useful than letting the arrow fly and forcing opponents to block or dodge. At least her Super Special Move is really cool, including a rain of arrows.

Sogetsu Kazama is the waterbender to his brother Kazuki’s firebending—okay, so maybe they are elementals but we all agree that bending is cooler, right? At any rate, Sogetsu seems to be an area-control style character who can place water bubbles around the stage, suppressing opponent mobility. His regular attacks cover large arcs on the screen, allowing him to close in when necessary. This character requires patience—something I already struggle with—and he seems redundant with Rimururu as an option. Of course, his Super Special Move very much reminds me of waterbending, with his bubble trap.

I had to explain to my wife, who was watching me play, that Ihora is a “titty fighter.” Because Samurai Showdown lacked a Mai “Me bouncy!” Shiranui, SNK had to create one. Her moveset is very traditional, including a fireball-type attack and an anti-air “dragon punch” attack, though I am concerned about their recovery frames. Her most important feature, however, is that she is one of the few characters in the game who has a double jump, the newly-introduced Yashamaru Kurama being the other (that I can recall). A double jump can completely ruin the timings of opponent responses to aerial assaults, an asset that cannot be overstated, making Ihora a threat despite all her…jiggling. And that Super Special Move above? Fanservice.

As expected, the PC version for SamSho is optimized, running silky smooth with fast load times. Its main obstacle, though, will be audience. I was unable to find many matches online, so as with LJ’s review, I spent time mostly playing vs ghosts with the asynchronous online mode, and the single player story mode. I do not see casual fans having fun trying to beat the SNK-hard boss though.

I tried to set up some casual matches online with my local fighting game community, but many of them preferred to play the Samurai Shodown NEOGEO Collection which Epic Games Store offered for free, a curious move that—as proven in my allegorical example—could arguably undermine Samurai Shodown PC sales. Luckily, Samurai Shodown is still on the Evo 2020 online tournament lineup, so hopefully that will amplify the game’s visibility.