...and Other Cool Sound Effects

From the makers of Draw Slasher and CorridorZ, Mass Creation brings Shing!. The beat-em-up genre has a new addition. The game features full voice acting, right controller-stick fighting mechanics, and an online leaderboard. Shing! is about three ninjas and a Scottish axeman fighting Yokai in order to retrieve the Starseed. 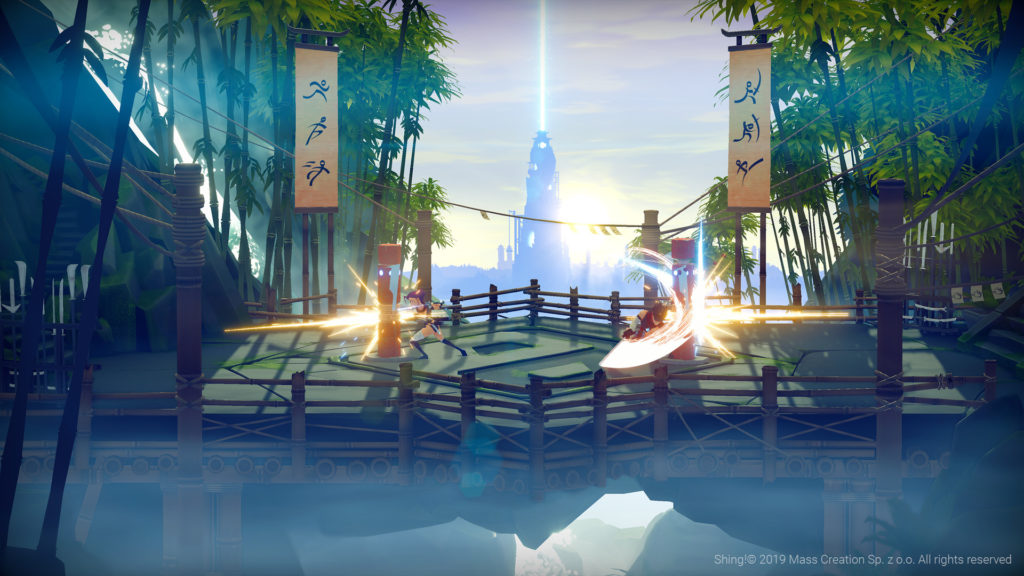 The game contains blood and gore, which can be turned off in the options. There are beheadings, disembowelment, and chopped up bodies.

The main enemies are demons, or Yokai, and other monsters, from little goblins, to dryads, skeletons, and more.

The female ninja-yoroi expose all of their legs, and barely cover their breasts. The game provides jiggle physics for boobs. There is a hot spring moment.

There are lots of toxic male traits, which include slandering women and obsessing over penis sizes.

Shing!’s story is light, offering just enough to keep a subtle progression of levels. The ninja warriors you control chase after demons who have stolen their people’s power supply, the Starseed. 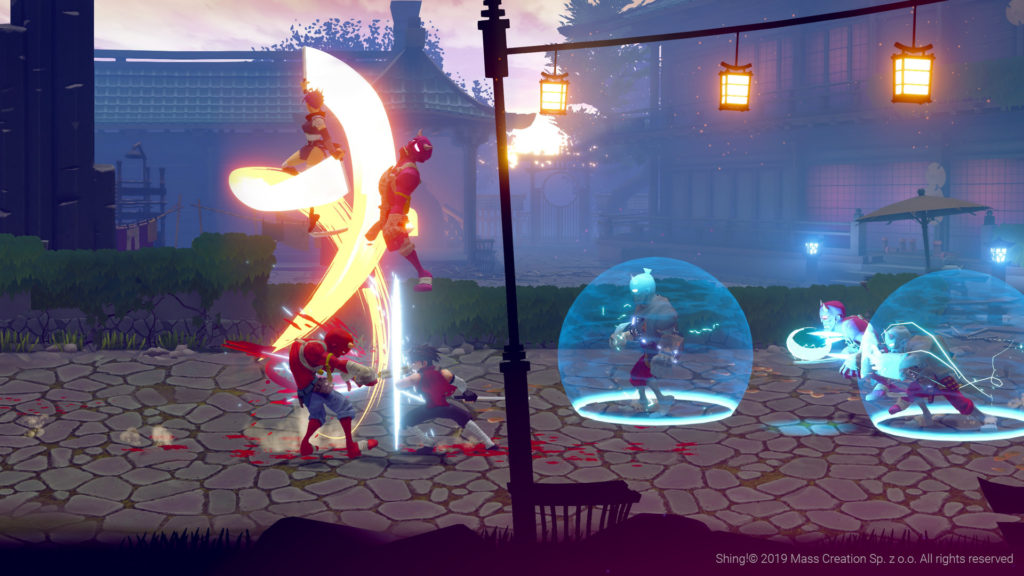 Tetsuo, Aiko, Bichiko, and Wilheim are the characters in the team, and can be characterized as the cool one, the serious one, the woman, and the strong one. The writing goes for a lighthearted romp across the country and provides lots of wise-cracking statements, with a mix of cool one-liners and some crude jokes. Bichiko likes to tease her sister, Aiko, about not having a boyfriend, or having the most graceful form in combat. Tetsuo sometimes tries to sound better and manlier than his older counterpart, Wilhelm.

The music and voice acting, lend themselves to improving the game’s quality. The oriental-style atmospheric melodies and the accompaniment of an electric guitar blend together during fighting moments to elevate the feeling of intensity. And when the action dies down, so does the music.

The voice actors and actresses behind each character are expressive. Each one delivers their lines with professionalism, and makes no fault.

Gameplay in Shing! is promoted by Mass Creation as “the most exciting and immersive beat-em-up combat system ever.” Fighting is the majority, but sometimes a puzzle will appear to break up the pace, and challenge rooms can be found in the stages. 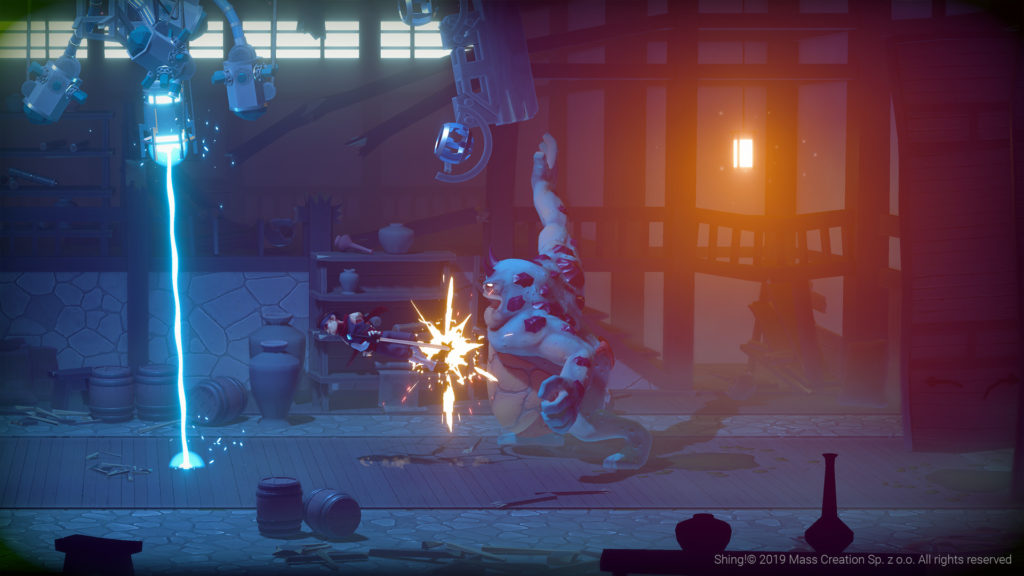 Battle mechanics are average. The controller’s right analog stick is your main weapon and source of combo making. There’s also a jump, a dash, a block, and a knock-back button. Players can toss enemies upward, juggle them in the air, parry attacks, and counterattack. In battle, momentum is very important. Not getting hit fills up the players rage bar, which can activate a moment of power that unleashes a powerful combo. The four turtles…I mean Yokai hunters can be switched at any moment. Each one features both a slight advantage and disadvantage in battle. Wilhelm cannot attack smaller enemies; Aiko is quick and can attack any size, but her attacks cannot stun; Tetsuo and Bichiko have long reach and can take on aerial enemies easier than the others.

Often, a puzzle room will appear, locking the door forward. But these puzzles are easy to figure out, and most players likely will not get stuck or have to restart, because they do not get overwhelming.

Some rooms have a moment of reprieve, where the characters interact with each other. Sometimes they sit at a bar and have a meal, or soak in a hot spring. These little moments give the characters time to make small talk. 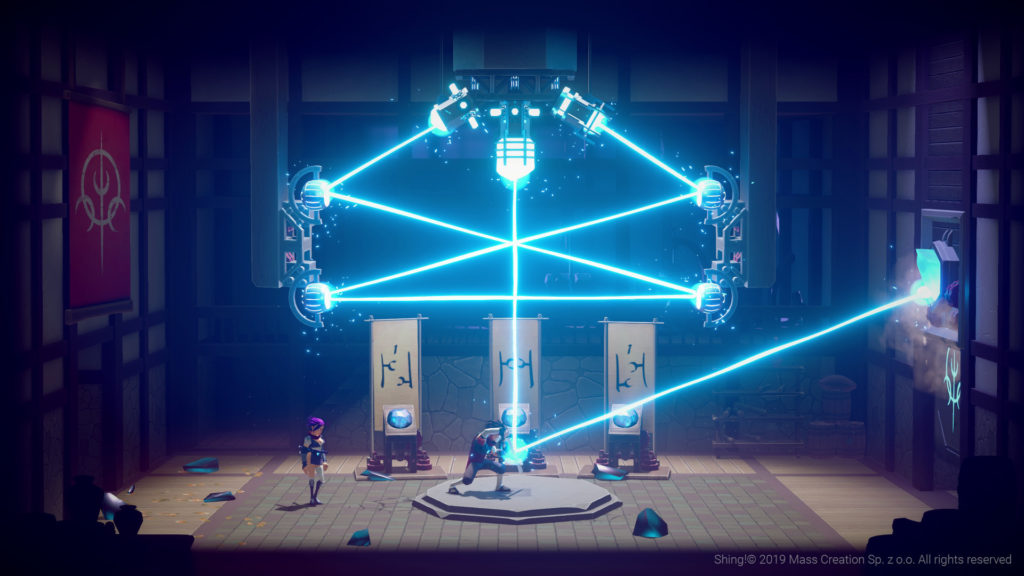 Challenge rooms live up to their name. Challenges like only counter-attacking, or making a ten-hit aerial combo will test your skill and knowledge of the game.

The reward for clearing a level, a challenge area, or a reprieve section, are either pieces of a medallion or a whole medallion. These only go towards costumes for the four player characters. There’s also a counter in the top right that adds up depending on certain criteria. Juggling enemies in the air, knocking them off platforms, performing successful combos increases the count, and at the end players can see how their score compares to the other players of Shing!.

Shing! takes about five to six hours to finish on the Easy difficulty, but there are three harder modes to complete. The fighting system is interesting and fun to play with for about the first hour of the game. After that, players will most likely have mastered all the possible combo and air juggles strats. 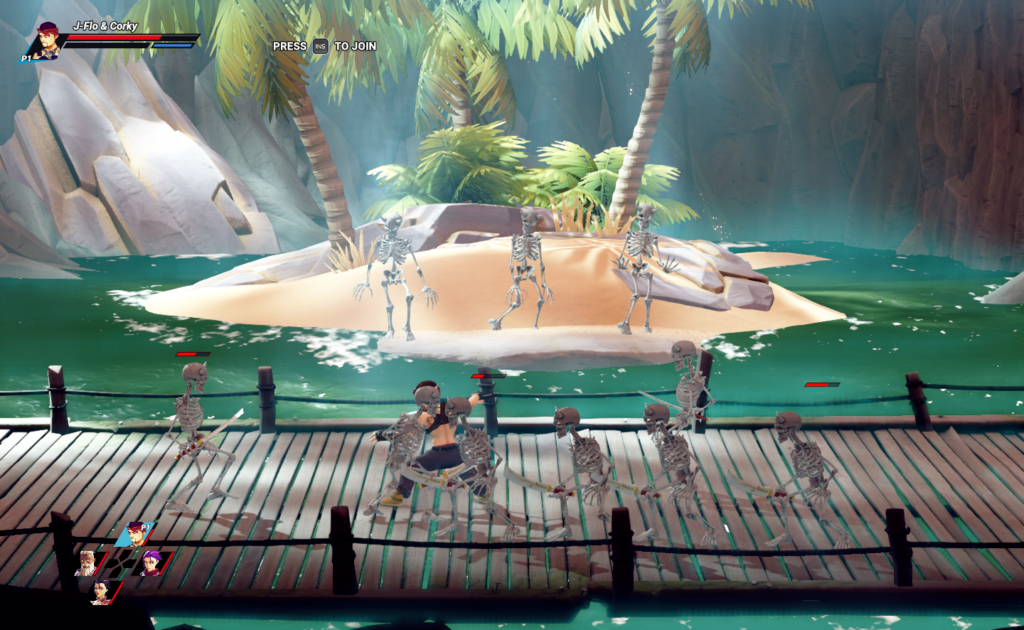 Enemy selection per encounter is the most difficult element of fighting. Mass Creation mixes and matches enemies that compliment each other to make focusing on the wrong one punishable by constant knock-downs. If taking down the big brute first seems like the best option, the little lightning monsters will make sure you stay down for a while until your health is really low.

If one character happens to die, the other that comes in afterward can revive them with a small amount of health. It helps to keep the game going, and makes health management a big challenge.

Power-up orbs can help make the fighting easier. There are a few: purple for absorbing damage, blue for unleashing lightning, red for powering up your main weapon, white for attacking faster, and green for healing. The green orbs are incredibly important, and must be taken into account of who needs them more. The game does not have a turkey, or any other healing collectable, hiding in a wooden barrel for players to find.

Overall, my time with Shing! was bittersweet. The aesthetics were nice, and the level construction was really good. I loved the boat level, having to cross on top of them while avoiding fireballs scratched that permanent platforming itch for me. But I still have my gripes. Recalling my content guide, I wasn’t too impressed with the stereotypical sexist gibberish from the characters. The girl’s attire is too skimpy. After the third level, fighting was more of a puzzle than the actual puzzle rooms. My character was wide open to attack too frequently, and blocking feels really difficult.

Four player co-op option is Mass Creation’s other big thing to flaunt for this game. Based on playing solo the entire time, I can only speculate that the combo mastering factor has the potential to get to bottomless depths of craft and ingenuity. So, that is to say, playing with four people is probably the best way to play Shing!.

Shing! offers nothing new, is a bit clunky, and couldn't keep my attention after the first hour.