SAIL THE STARS. BETRAY YOUR QUEEN. MURDER A SUN. 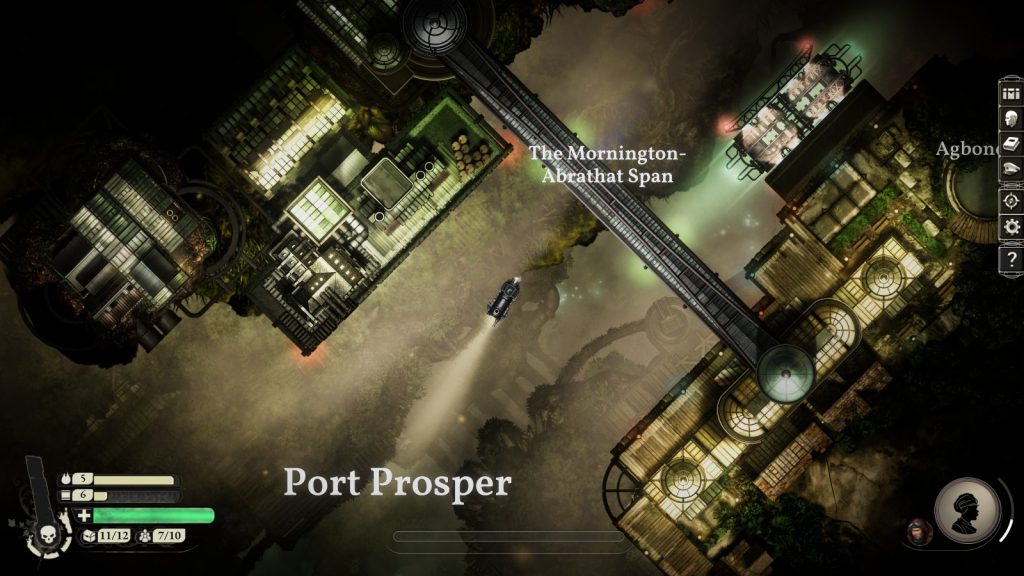 Sunless Skies is a continuation of the dark Gothic Victorian game setting from Fallen London and Sunless Sea. While not a direct sequel, it takes many of the gameplay elements players from Sea will recognize and places them against a re-imagined sky of stars and danger. Trading in boats for sky-trains (think the end of Back to the Future Part III), players will navigate to different ports, trade, fight, mine, scavenge, survive, and do quite a bit of reading in this rogue-like game from Failbetter Games.

You can attack and be attacked by all manner of beasts and train captains alike. Some factions start neutral to you, while others, like the marauders, will attack on sight. Trains explode and leave behind scavenging opportunities. Sometimes, you may have the option of taking on crew as spoils or executing them. Since it’s a text-heavy game, little to no blood or gore is seen, even when crew members or captains die.

Players may run into several different Lovecraftian-inspired enemies. Souls and hours are bought and traded. Relays to move to different areas function with runes like some kind of stargate.

A few curses starting with “d” and “b” are used. When they show up, they are partially blanked out (e.g. “d*mned”) in the game.

Some characters smoke. Players can meet other Captains at a bar and trade stories or useful information over drinks. 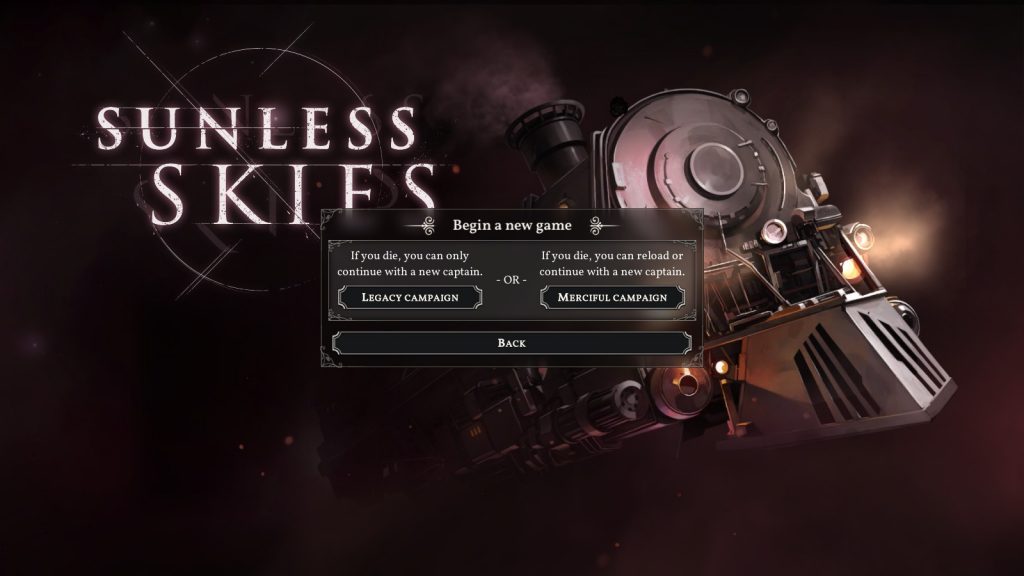 This made me so happy.

In my review of Sunless Sea, the two things that I thought kept the score down were its wordiness and difficulty. While the reliance on reading large portions of text has not changed, I’m fine with it since that’s part of the tapestry of the game universe. The difficulty curve, however, has been addressed in Sunless Skies. Not only can you continue from your last auto-save or start a new captain when you die, you can also get down into the nuts and bolts of changing how hard the game is. Are enemies aiming too well? You can change that. Are supplies running out too fast? You can change that too. I cannot heap enough praise on Failbetter for not just doing easy, normal, and hard difficulties, but actually letting players choose how hard they want the game to be. This feature, combined with still being able to choose your victory condition, makes Skies one of the best games for player agency I’ve seen in recent years. 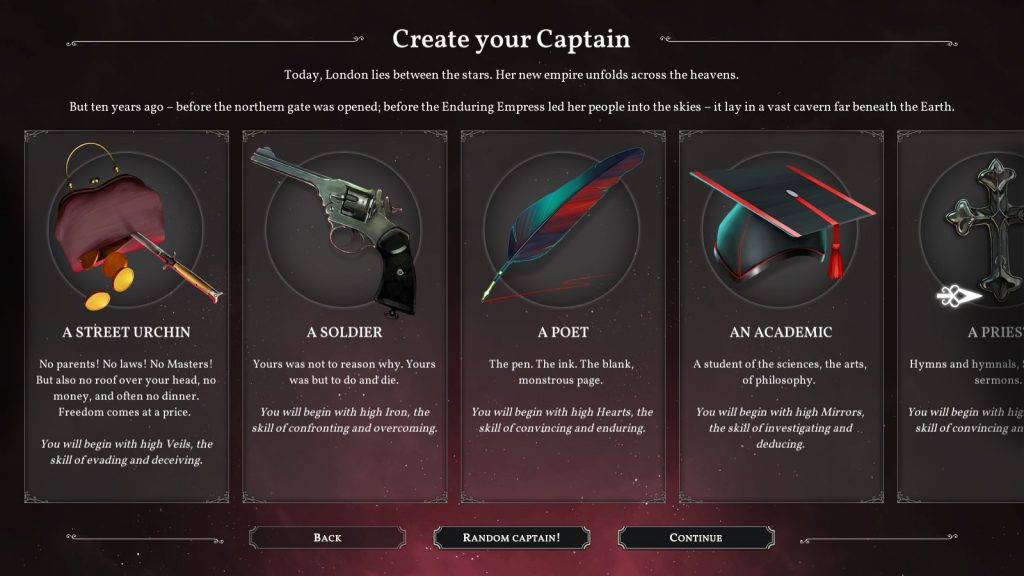 I like that they took a moment to explain what “Iron” and “”Veils” and the other stats mean for the player before they make you choose. 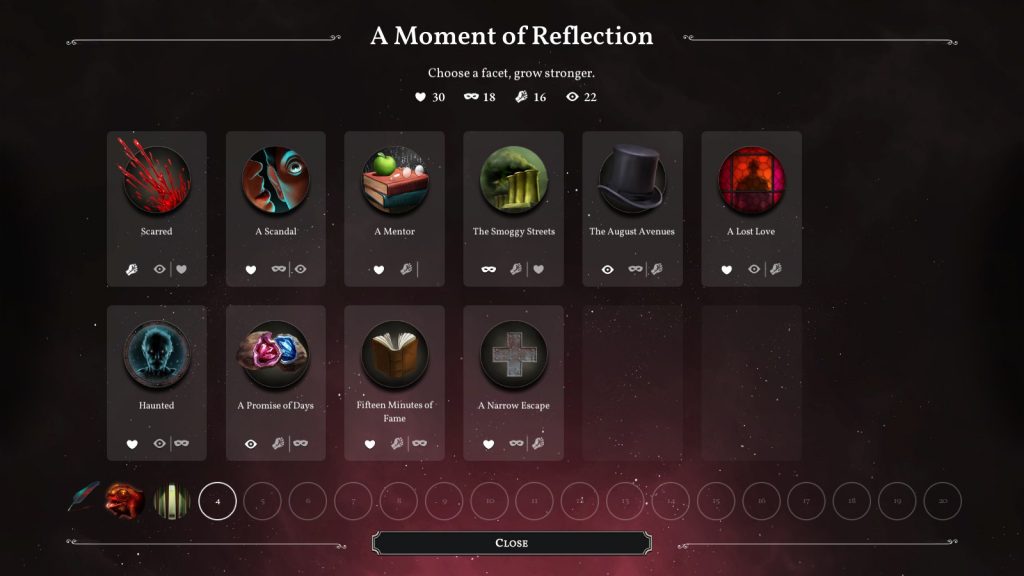 When you level up, you get to choose something that happened to your Captain that boosted their stats. This screen also has one of the only instances of blood that I saw.

That’s not to say that Sunless Skies is easy, even when you turn all knobs to the most player-favorable setting. You still have to use your wits and a bit of luck to make it out there—and on more than one occasion, I was happy to have the option to reload from my last save. However, they seem to have found the razor’s edge of tuning the difficulty. Several times, I thought to myself, “Oh, this captain is deeeeead,” only to have some miracle of random events transpire that got me just enough fuel, supplies, or repairs to keep flying. I felt like a Victorian Malcolm Reynolds, just trying to keep my crew alive and my train flying by the skin of our teeth. 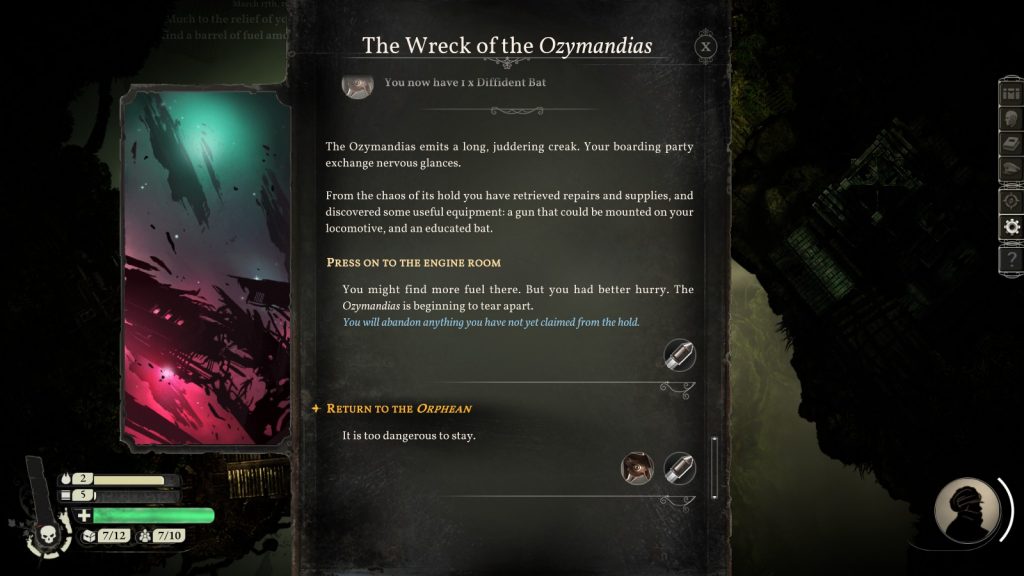 One downside I did experience was crashing; it only happened twice. The first time, I was docking, and I happily quit to desktop, rebooted quickly and found it had saved my game right when I had docked, so that none of my progress was lost. The second time was when I fired up a relay to a different area, and it locked everything up for a couple minutes. Failbetter has stated that they’re working on performance issues in the press copy, and given their pedigree, I believe any issues should be quashed by the time they launch. In any case, neither crash was enough to keep me from wanting to play more. 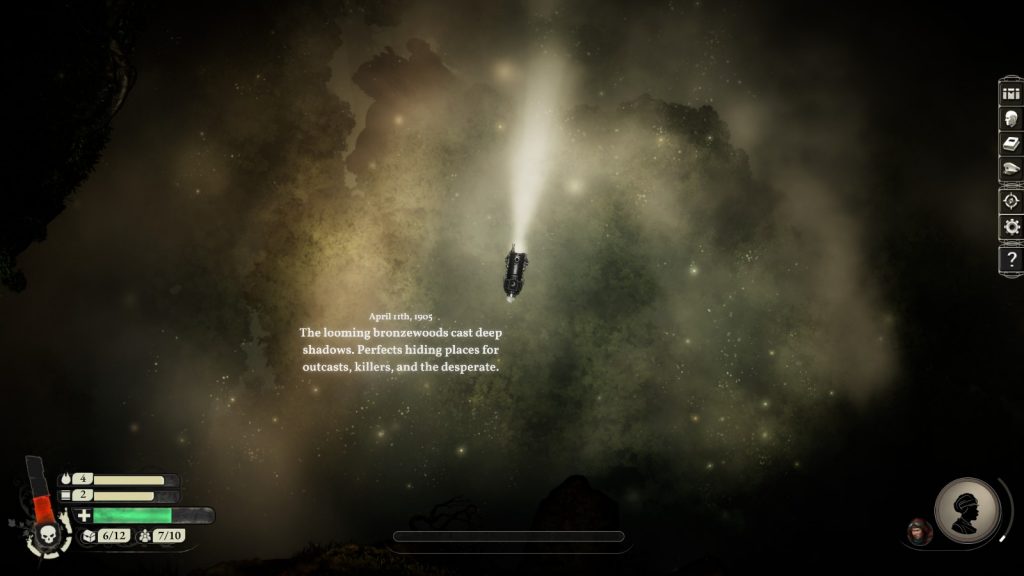 The game marks the passage of time with small notes and anecdotes that appear directly onscreen. Time is important because you can only get new jobs and crew every so often at port.

Speaking of relays, that’s another new addition to Skies. For a fee and with the right documents, players can access relays that jump you to different sections of space. When I first started playing, I was confused, thinking that they had made the map slightly smaller and circular. But, no, I was only in the first of four areas. If I had to venture a guess, the combined areas probably equal close to twice the size of Sea’s map. And since you’re not in wide-open water, Skies makes you travel down smaller venues and tunnels, often forcing you to choose your path carefully.  There are still some open areas, but often in combat, I had to decide if I wanted to engage while in a tight space or try to dart past and hope to outrun them. 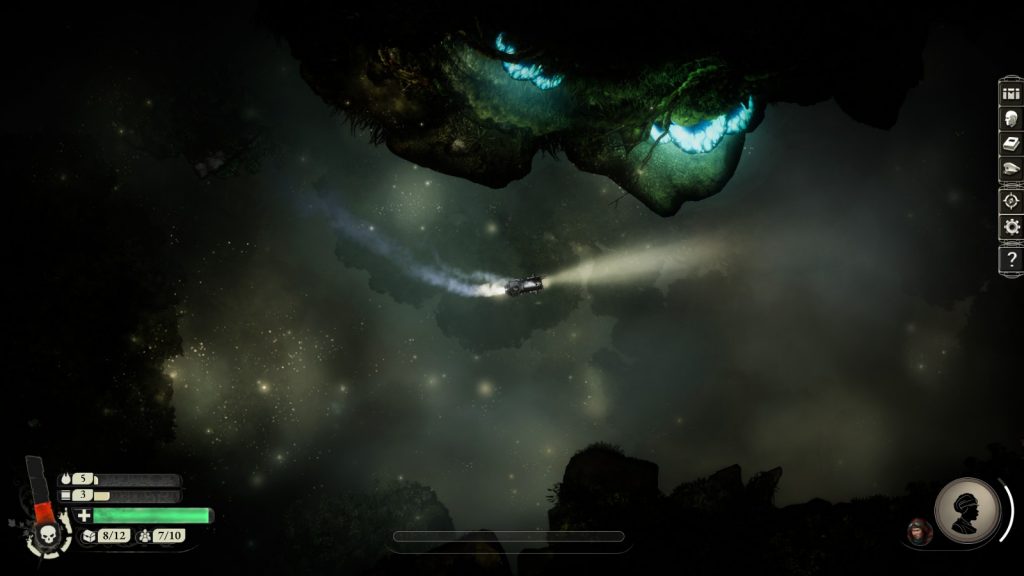 Players will see all manner of weather, and settings, in the Reach (starting map area) from snowy peaks to dense jungles. And if you don’t properly manage your Terror (red bar, bottom left) you may see a few things that aren’t there.

Combat involves much more action and maneuvering than in the last game and players can press “Q” and “E” to strafe out of the way of enemy fire, as long as they haven’t overheated. Instead of just picking a speed and circling each other, fights are much more organic and resemble fighter pilots trying to get a kill shot on each other without opening up themselves to return fire. There are some great graphic touches as well, from the steam shooting out the side vents as you turn and strafe to the explosion animations. Even as you fly through the sky, you can see small spurts of steam corresponding to your train’s movement as you turn right or left. 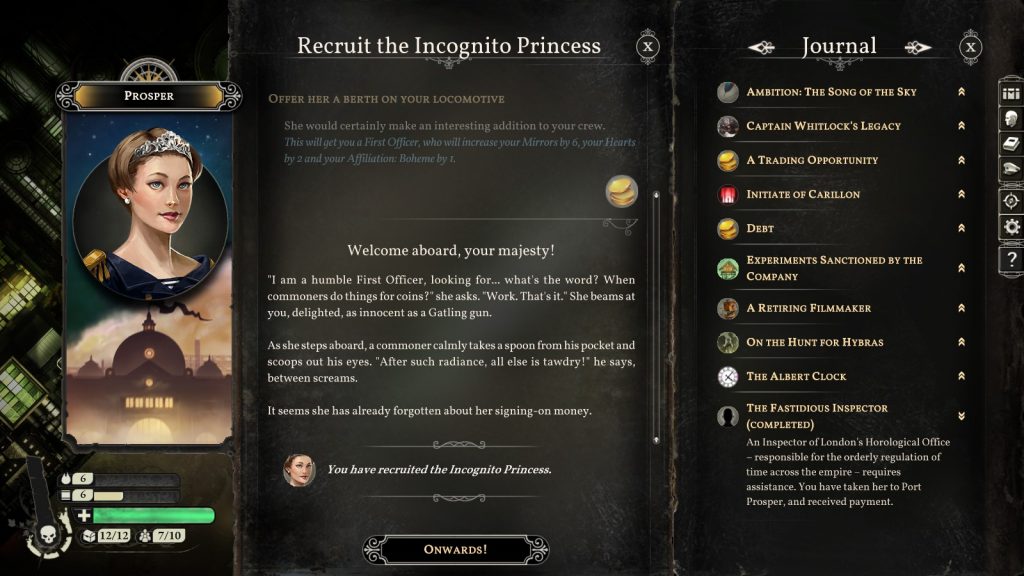 Recruiting officers bolsters your stats. And despite the ocular violence, this exchange made me laugh.

Sunless Skies is a great continuation of the game series. It has everything great about its predecessor plus greatly increased accessibility and combat. If the difficulty level kept you from getting or enjoying the last one, you should definitely give Skies a try. It isn’t perfect, but there are so many improvements including the setting sliders, increased explanation of how your stats work, and effects trials and tests. I strongly recommend giving Sunless Skies a try.

If you're a fan of Sunless Sea, Lovecraftian Horror, or Firefly, you'll probably love this game. If you don't like reading, dying in-game, or making new characters, you might enjoy it less.