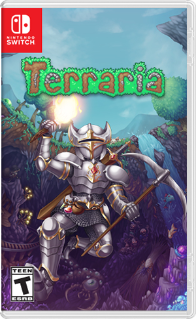 Terraria is one of the original crafting survival games to come from the early 2010s. This 2d flavor twists toward fighting scores of enemies and bosses as you dig deeper below and explore new biomes on your horizons.

Developer Re-Logic (Pixel Piracy, Pixel Privateers) has long produced content for Terraria on Steam, with PC being the original place to play Terraria. Since, Pipeworks Studio has worked alongside Re-Logic to bring Terraria to PS4, Xbox One, and now: The Nintendo Switch. 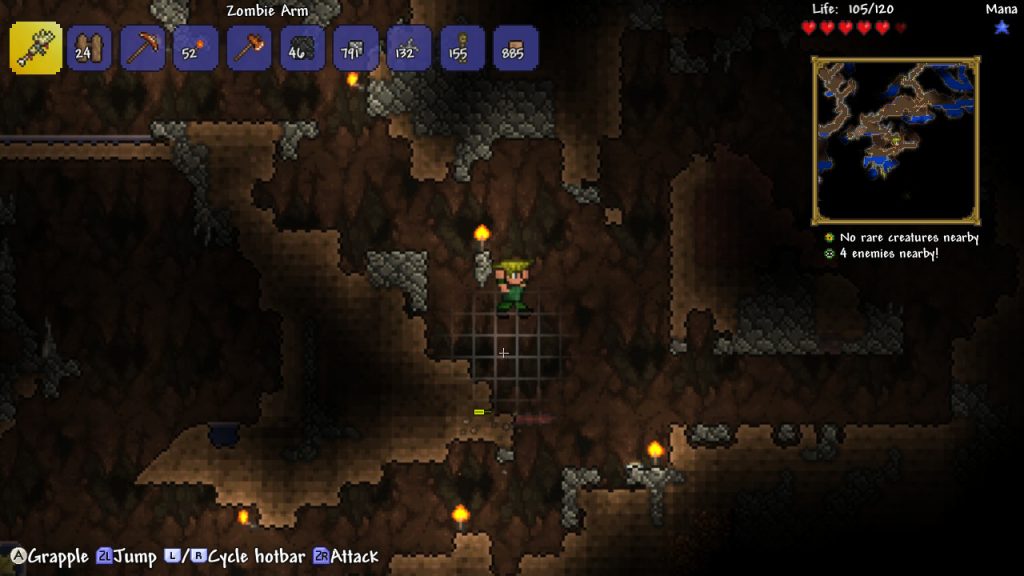 I haven’t played Terraria through to the end because I’m a noob, but I’ve seen my fair share of bizarre creatures from venturing out into new biomes.

Violence: If you aren’t digging into the earth in Terraria, you are killing monsters. It’s pretty harmless, however, and you’ll hear the monsters grunt as you smack them. They explode into tiny pixels of whatever matter they’re made of. Some monsters are pretty gross, including zombies, walls of flesh, and floating eye balls.

Sexuality: To my knowledge, the Dryad is the only NPC who can join your village who is dressed provocatively, with weeds and vines for clothing. It’s only a tiny pixel person, but it’s worth mentioning.

Spirituality: It’s limited to name only, and perhaps the style of a few attacks, but there are a few spiritually-themed monsters, such as the a few types of Demons, Desert Spirit, and others. You’ll encounter these in far off regions of the game, all of which I feel nowhere close to encountering within my hours in-game so far.

This is light spoilers, but there is a biome in-game known as the Underworld, which supposedly represents hell. There are lava pools and many difficult enemies here, but also great loot. 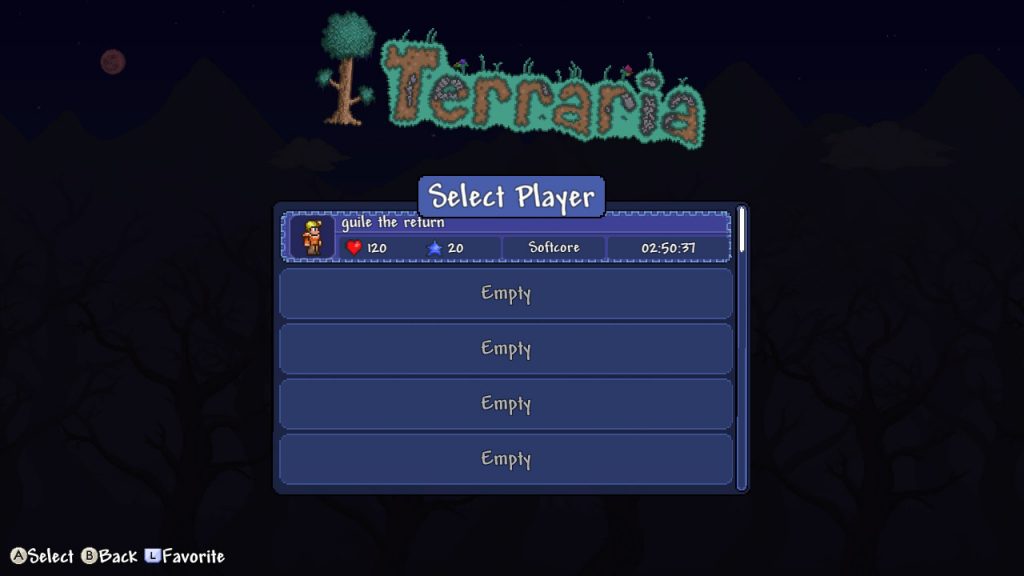 In all of his glory.

In college, I was one of those annoying, know-it-all, Minecraft-only players. In fact, when I first saw a couple screengrabs of Terraria, I believe I scoffed. Since, the genre has exploded, with many titles trying to cash in on their varying twists to the survival/crafting formula. I’ve played my fair share of them at this point, but I’ve always been a Terraria noob. Over the last few years, I’ve played about 45 minutes between PC and PS4, but finally, Terraria is available on my favorite console: The Nintendo Switch. Carelessly wading into the waters, I started my new world in Terraria which I’ve named Katie (after my wife). I realized I could create a tiny-2d version of Guile from Street Fighter, so obviously I did that.

Terraria starts out fairly normal. I spawned onto a bumpy green hill with a few trees around and a selection of mining and cutting tools. I spend a few moments chatting with this dude named Cody. He spews some game mechanics at me and I walk away—or, more accurately—I walk directly into a green slime. Not knowing the controls on Switch yet, I pull up my inventory. While I’m trying to figure out how to repel this vacuous fiend, I’m apparently also trying to figure out how to menu.

The game doesn’t pause while you are in menu, so the slime continues slapping me around. As my life flashed before my eyes, I finally remember all the training I’d undergone in the Terraria tutorial I played the night prior. I exit the menu, and use the bumpers to navigate my item/weapon wheel (you can also select an item using touch). Just as I’m about to slay this horrible fiend with the axe I switched to, I watch as a few arrows sail through me and into the slime, killing it almost immediately. It was Cody. Apparently, he’s skilled in slime hunting. Good to know. 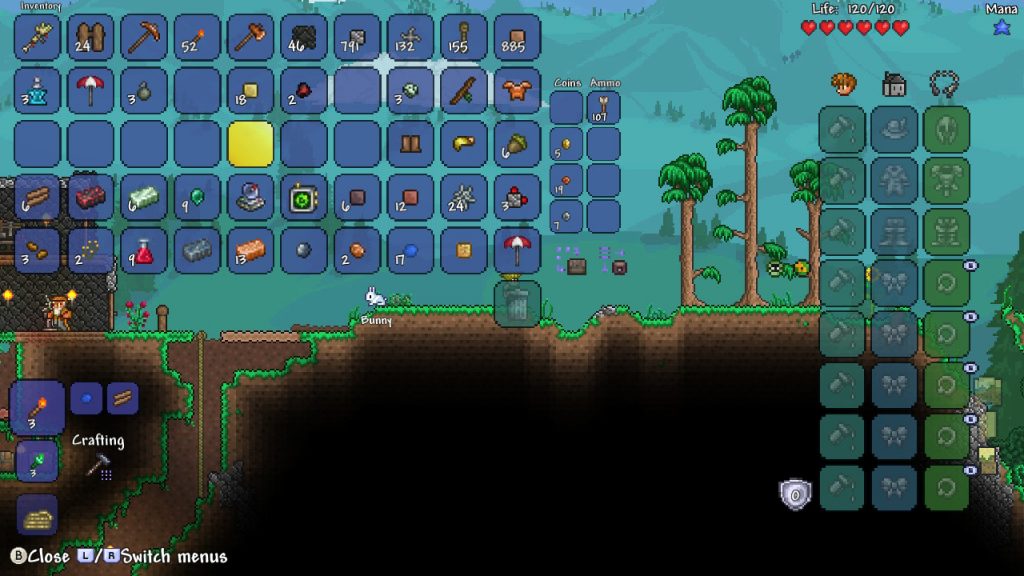 Menuing is pretty good. You can switch to crafting with bumpers. You can also use touch to drag items around. Very handy.

The next few hours in Terraria are a montage of me learning whether I prefer mining with the Switch’s touch-screen or the directional buttons. I can appreciate the inclusion of being able to quickly swap weapons or mine particular locations with your finger. I’ve decided it’s not for me. Fat finger syndrome and what not.

After digging down and finding a few caverns, pools of water, blue slimes, and pots full of goodies, I made my way back to the top. I’d constructed a basic home of wood with dirt walls. It’s not much, but it’s home. And no, I’m not convinced the night-zombies can’t break through my wooden doors. Cody sits in my home to guard it. I look at him one last time before heading into the mines again: “Cody, I can’t always be there to help you. If you need me, I’m like 400 blocks underneath you, so please just make sure they don’t find my treasure chest under the house.”

I find this zombie arm, and it’s way stronger than that worthless copper sword I started with. Instead of just poking things, I swing it wildly like a helicopter blade. It’s pretty effective against a horde of enemies if you time it right. Fortunately, I decided to nix a second floor to my home for the moment so I could spend the wood on creating a set of wooden armor instead. It can’t be comfortable, but I think I can survive at least an extra two mutant eyeball attacks with it on. 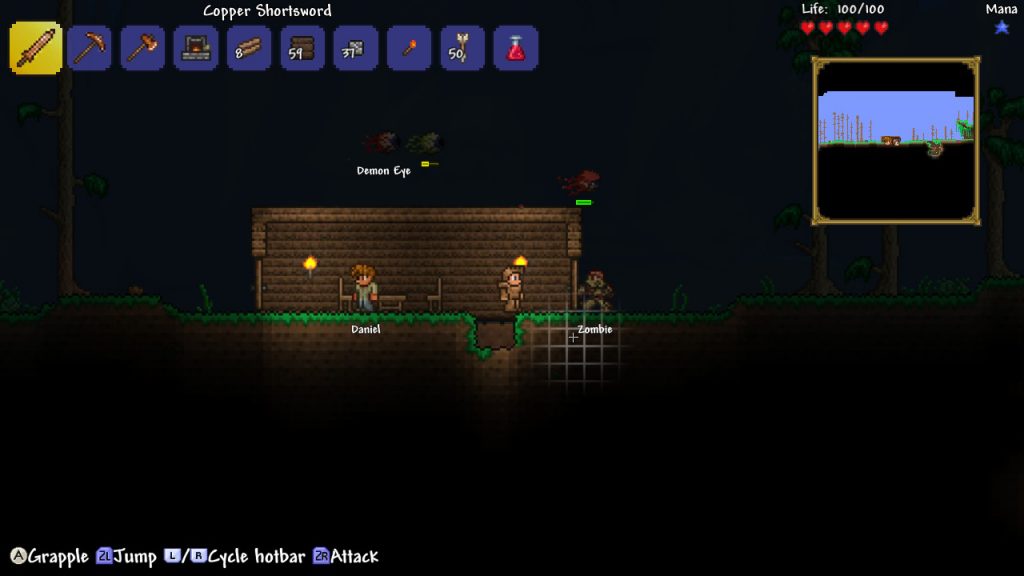 I typically resolve to avoid wikis for as long as possible with big, expansive games like Terraria, but listen: I couldn’t figure out how to smelt the precious metals I was digging up. I learned from the wiki that Cody can dissect any material you give him. He tells you what you can build and what you’ll need to do it. Okay, Cody. I’m impressed. At first, I thought you were just a slime and zombie slaying home protector. Now I find out you aren’t just babbling nonsense, but you’re also the Bill Nye of Terraria, minus the angst. I can get down with that.

I build a few more houses and before you know it, more NPCs start showing up. They usually say stupid things that don’t matter, but they do sell lots of goodies. I bought an iron anvil and a few other materials. To protect my new friends, I began creating a few moats—read: giant, endless holes—so these NPCs didn’t have to worry about the undead showing up at their wooden door frames. Before leaving to mine, I told each of them, “If you hear a fury of knocks at the door, it’s not me. I just bust into the home. Zombies knock. Got it?” 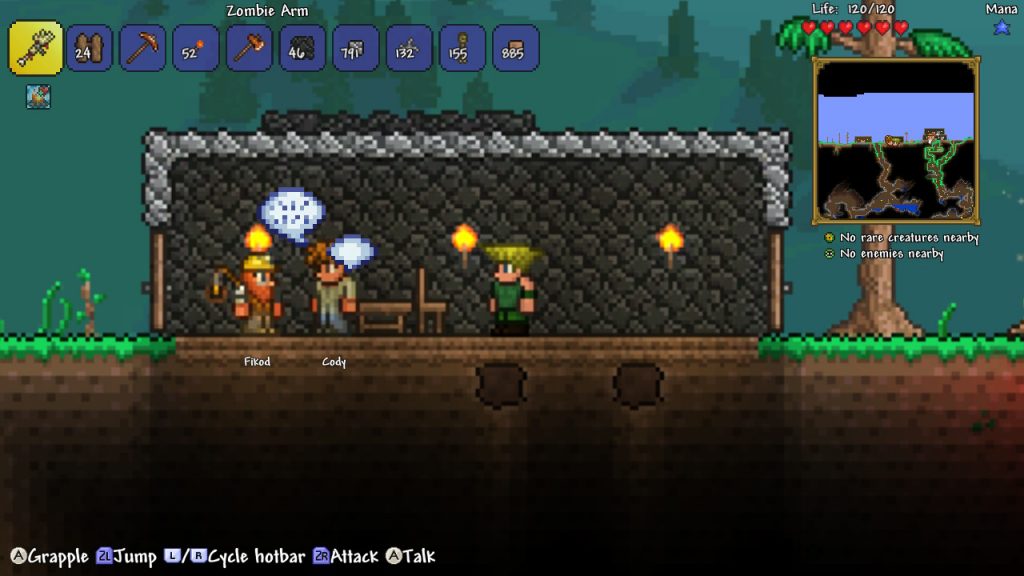 Cody loves talking to people I guess. I hope he finds a new friend in case I die in the mines below.

To date, I’ve explored a lot of the underground. I’m learning how ropes work, so my tunnels have started to become less stair-like, and more like long, tall holes into nothingness. I’ve learned to carry a million torches on me at all times, or at least to wear my hard hat for light. I’ve also learned to not dig straight down. Ever. You can fall into a pool of water and drown if you don’t move quickly enough.

After a few suicide runs to my left and right to explore the rest of my island, I’ve also learned there are plenty of new biomes to explore. I can find desert or snow, and eventually, some horrific corrupted, awful zone, with monsters that can almost one-shot me. I found some potions of warp at some point, so those are a big deal for when I’m running around to explore or find loot and port back to home. I’m learning there is so much more to this island than I first thought. So many different places to build homes in, and so many caverns to find and explore. I haven’t gone super deep yet, but it’s concerning to get blasted in the face by a huge worm while I’m just minding my own business underground. 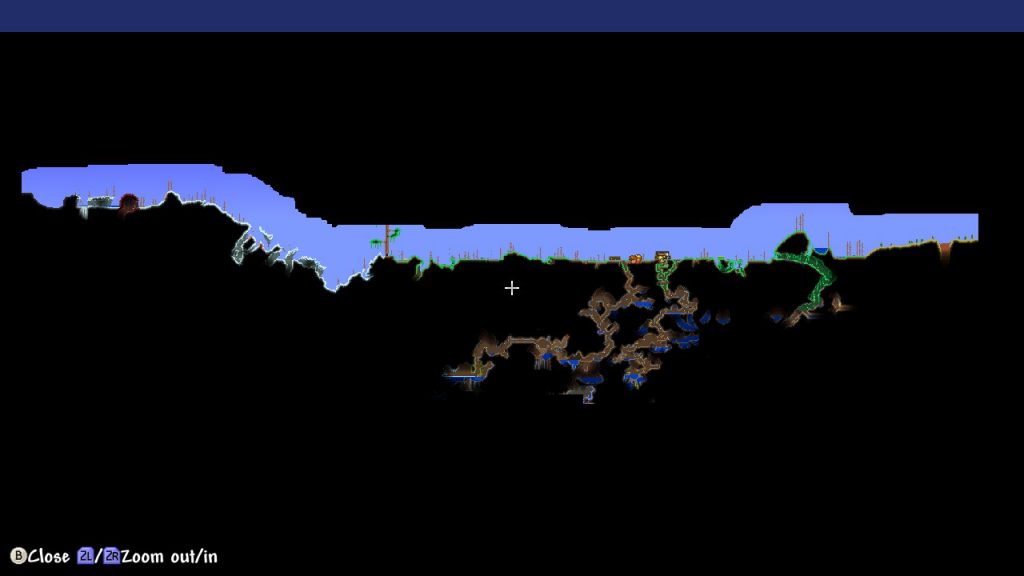 My puny attempts at exploration so far. I’ve a long, long way to go.

In preparation for this review, I spent a little bit of time going through the wiki and a few beginner guide threads on Reddit. There is so much to see in Terraria, and I’m actually baffled by it all. I’m thoroughly enjoying each new challenge and each new set of items I can find and craft.

I gave it some grief earlier in this review, but the menu UI isn’t that bad. You get used to it pretty quickly, though I do prefer running through inventory and options with buttons instead of touch-screen controls. I think some will appreciate being able to use the screen more than I, and I’m sure there are ingenious uses for this technology and Terraria that escape me entirely.

For me, games like Terraria—or most 2d-platformer style indie games—feel at home on the Switch. I just adore being able to sit back and relax and cozy up with my wife while enjoying a simple and engaging game. Terraria isn’t simple by any stretch, but I don’t have to mentally prepare myself to play it.

I’ve read that I’ll be facing off against big boss battles as I progress in Terraria, but I don’t know where or how that happens. I recognize Terraria veterans read a phrase like that and laugh in pixel, but I’ve had such a wholesome experience otherwise. I’ll be ready for those boss fights, I’m sure. In fact, one very useful feature I discovered is being able to adjust your zoom level in-game by pinching or spreading your fingers. I imagine for any sort of large arena fighting, this will be immeasurably helpful to give you a much wider field of view.

For anyone looking for an immersive 2d-crafting survival game, I’m sure there isn’t a better game to stick with. Again, I Minecraft on Switch, and at some point, I may vacillate between the two. But at the moment, I’ve got Terraria on the brain.

A review copy was generously provided by Wonacott PR.