The Art of Remaster: Crysis Remastered

It wasn’t until 2017 when I joined the ranks of the “PC Master Race.” My family has owned PC’s for as long as I can remember, which is how I was able to experience the FPS genre starting with Doom and later Counter-Strike, Half-Life, and so on. Crysis was one of those that I never did get to see, and a lot of people also didn’t. For more details, PC Gamer has an article from 2017 on why we can finally run the game smoothly ten years after its release. However, many of you already know the story behind the game and want to know: How does this legendary PC game run on the Nintendo Switch, and does it do so well?

Though I did eventually try Crysis when it was ported to the PS3 late in the console’s lifecycle, I only knew what it became infamous for and considered it to be a fairly standard shooter. Since its initial 2007 release, video games had already been implementing features that this particular game was known for, such as environmental destruction—and did it well. So, I’ll be referring to Digital Foundry’s analysis video on this remaster/port, due to the fact that I honestly didn’t know what to look for when I first booted up the game on my Switch. 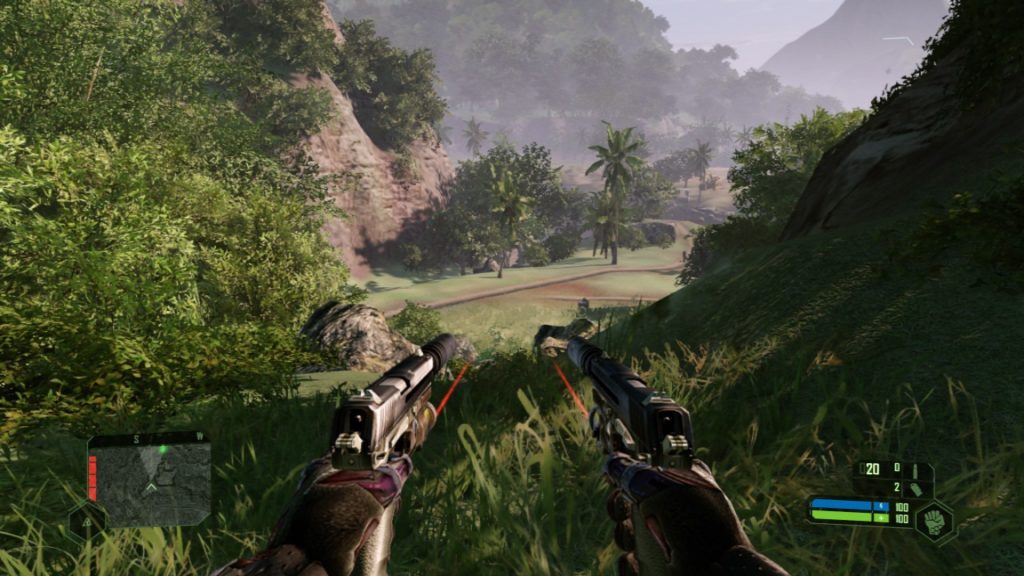 Beautiful scenery is also a playground for chaos.

The first things I noticed when I first played Crysis: Remastered were lower resolution and frame drops—easy to spot for anyone with basic gaming knowledge. These setbacks were expected in a release such as this, considering the limitation in the device’s hardware. The framerate drops occur during moments when lots of action and destruction appear on the screen. though the worst time it comes up is when you aim down sites of your gun—an easy way to kill any momentum. However, even with these kinds of issues, there are still plenty of characteristics that make this an actual remaster of the original game.

An aspect I grew to appreciate more after watching DF’s video was the lighting. It turns out that the lighting techniques that were used in the original game have been replaced with world lighting—which is the sun and the moon in-game. While I think it leaves some spots a little darker than I’d like, it works for this port’s benefit as it can hide some of those lower-res textures. This is also an improvement over that PS3 version, which had a strange blue hue over the screen throughout the entire game. 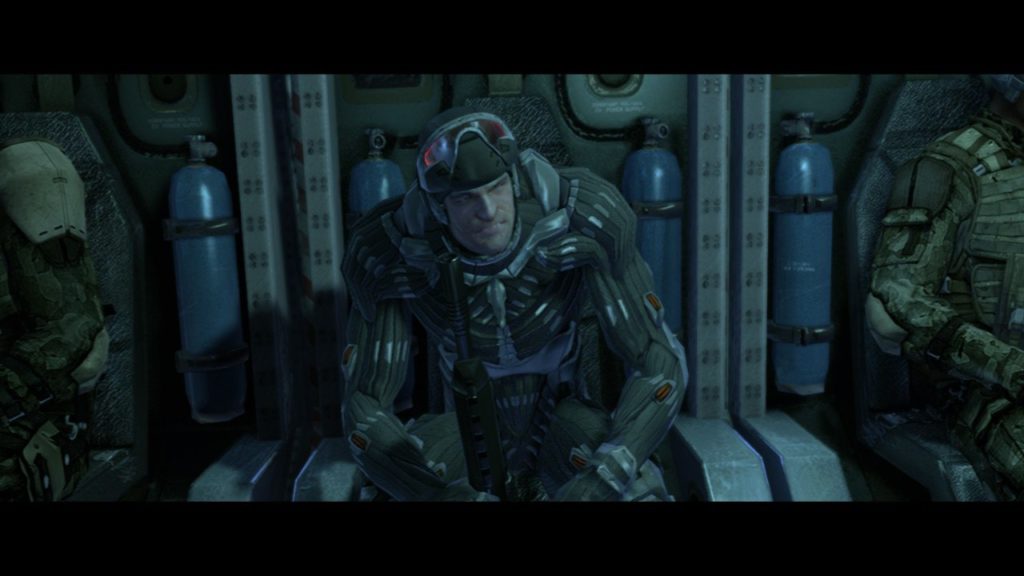 The models of the recurring characters look good, while the minor NPCs weren’t touched.

This version of the game includes many environmental improvements and reductions while being both a remaster and a port. For example, a larger amount of flora and fauna exist on the Switch version that was not present with its older console brother. Some of that also happens to be removed from the underwater pieces of the environment on Switch, but you won’t be spending much time down there anyway. It seems like the developers spent some quality time choosing where to add and subtract with great care; at one point between objectives, I experienced some beauty in the midst of all that occurs in the island setting as I watched a random butterfly flutter around for a while.

Aside from those dropping framerates I mentioned earlier, the gameplay seems to be intact. After learning that destruction was half the fun of playing Crysis, I put that knowledge to the test. My efforts went into using the environment as a tool rather than simply shooting the next enemy in my sights. Dropped framerates mostly occur during massive explosions, but I was able to watch some trees and debris fall with satisfaction. Playing with this technology showed me that Crysis was not meant to be your average shooter and that porting it to the Nintendo Switch is an even greater feat than I had realized. 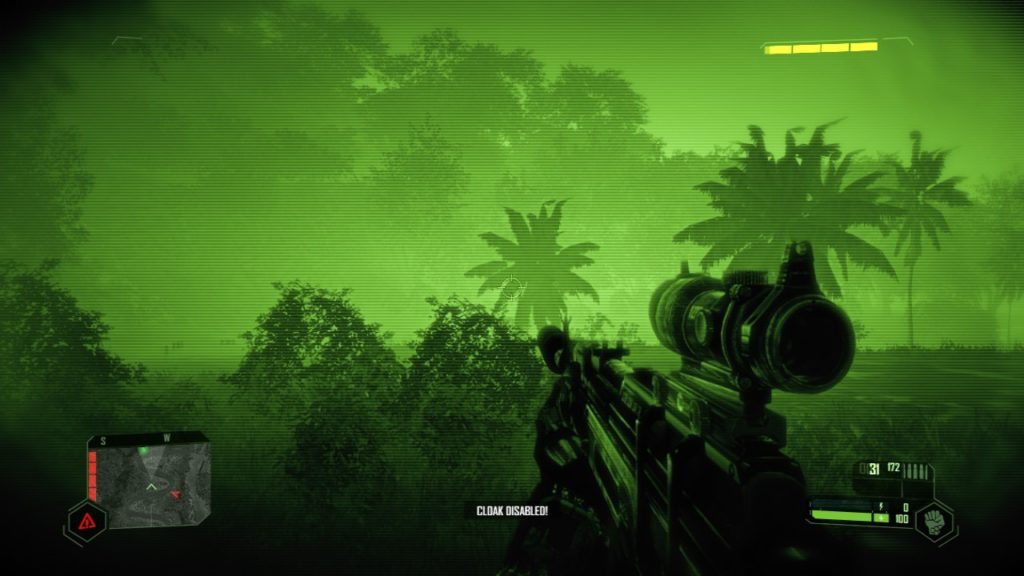 A soldier in the night.

Another piece of information I learned from the video is that this port is missing an entire mission. This mission, called “Ascension,” was first cut from the PS3 and 360 versions of the game. While I initially saw that as a major setback, it seems as though the decision was made to cut it based on fan feedback. The mission had players piloting an air-based vehicle and looks out of place from the start. Based on that reason, I believe we will not see it in the current-gen versions of the remaster. I don’t think there will be an outcry for Crytek to include this mission again, but this is a missing piece for any possible purists out there.

I made sure to put plenty of time into Crysis: Remastered in both the handheld and docked mode. While there is not a huge difference, the resolution does dip on occasion when out of the dock. I also found that motion blur can be heavier when not in docked mode, and there is, unfortunately, no option to turn it off. I also have a harder time seeing the enemies on the smaller screen, but my vision disability likely plays a part there. I enjoy playing this game in both scenarios, and whichever way you decide to play is no better or worse than the other. 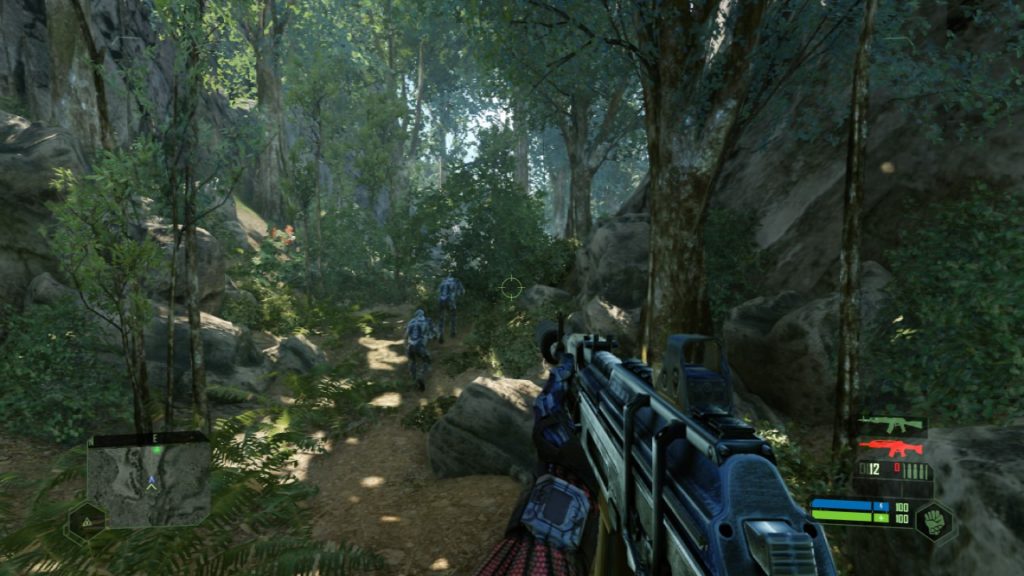 Some may throw up in their mouths at the idea of playing a shooter on such a device as the Nintendo Switch. For me, I’ve still had a good time with the few I have played. I have yet to see how some of the heavy hitters such as Doom (the 2016 reboot) and Wolfenstein: The New Colossus work on this platform, but Crysis: Remastered is impressive even with its setbacks. What made this game special back in 2007 remains intact, and the Switch does it better than the consoles of that current-gen. For anyone wanting to see the remaster on their high-end consoles and machines, I think the wait will be worth it. Though $29.99 is a little steep, Crysis: Remastered is worth checking out if you would like to experience a piece of gaming history.