Pokémon has always been a child friendly game on the surface but ever since its introduction there has been an undertone of some frightening things tucked just far enough away that it was largely ignored by even the most paranoid of the game’s critics. While the franchise is not without its controversies, I have always found it hilarious that the most obscure things are what made the headlines while the darker aspects of the game went relatively unnoticed.

The first generation started the franchise off with enough nightmare fuel as it was. The infamous Lavender Town was perhaps one of the most startling and uncomfortable aspects of any Pokémon fan’s experience. However, we are introduced to something far more sinister within the first hour of the game: The Pokédex. For those outside of the fandom, the Pokédex is a digital encyclopedia of data that updates with every new Pokémon that the player obtains. The Dex includes a small description of the Pokémon that outlines its behavior and major characteristics. As a child, I barely paid the Dex any mind, but as I grew older I actually took the time to sit down and read about the adorable fluffy things I’d been trusting with my trainer’s life for several generations.

And then I re-thought life choices. From an entire species established around orphans to the very souls of the fallen being forever enslaved to fight for ambitious ten-year olds, I thought that  for this spooky season I would lay out ten of the most disturbing Pokémon and their Pokédex entries. 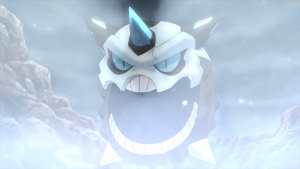 Mega Glalie doesn’t do anything to reduce the nightmare fuel…

Glalie has the ability to freely control ice. For example, it can instantly freeze its prey solid. After immobilizing its prey in ice, this Pokémon enjoys eating it in leisurely fashion.~ Pokémon Alpha Sapphire Pokédex Entry

Starting off this list, we begin with a floating skull head that haunts the frozen wastelands of the Pokémon world. This monster doesn’t just look like a floating nightmare; trainers that encounter it had better hope to Arceus that they can catch it before it catches them. Able to freeze prey solid, Glalie seems to have either a slow metabolism or a sick hobby of eating frozen creatures in the same carefree fashion as I would kick back and eat a bag of Veggie Straws. It should make trainers think twice about taking their Christmas holiday out in the wintery wonderlands. 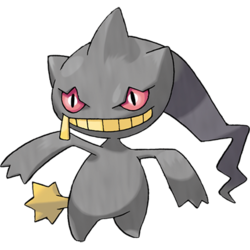 Banette generates energy for laying strong curses by sticking pins into its own body. This Pokémon was originally a pitiful plush doll that was thrown away.~ Pokémon Omega Ruby Pokédex Entry

A doll that became a Pokémon over its grudge from being junked. It seeks the child that disowned it. ~ Pokémon X Pokédex Entry

What do you get when you combine Lotso from Toy Story 3, FNAF, and a voodoo doll? You get Banette. This Pokémon started its existence as a beloved stuffed toy only to find itself tossed aside. It’s so consumed with anger and hatred that it’s willing to pierce its own body to lay down curses and it spends its existence hunting the child that disowned it. While the Pokédex isn’t exactly clear as to what the Banette wants to do with its victim, judging by its rather unstable nature it very likely isn’t looking to kiss and make up. 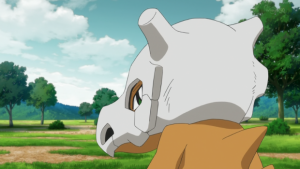 Cubone pines for the mother it will never see again. Seeing a likeness of its mother in the full moon, it cries. The stains on the skull the Pokémon wears are made by the tears it sheds. ~ Pokémon ORAS Description

You have to have a heart of stone not to love Cubone.

Drifting away from the disturbing for an entry, it would be an absolute crime not to include Cubone in this list. Again, the very first Pokémon games introduced players to Lavender Town, a small community without a gym. The haunting music and the unsettling atmosphere continues to haunt players to this day and has been the foundation for literal dozens of popular Pokémon creepy pastas for over a decade. At the heart of this plot we meet the tragic Pokémon, Cubone. Its mother has been brutally murdered by the evil organization known as Team Rocket. The mother, a Marrowak, has lingered in the form of a vengeful spirit, driving mourners away from the mass graveyard for Pokémon within the Pokémon Tower.

Cubone is a Pokémon whose entire existence is defined by its being an orphan. For a Cubone to exist, at least according to the Dex, a Marrowak must die so the skull can be passed down to the child. Nevermind that in-game you can hatch gaggles of Cubone, each with a skull already attached—it’s still darn depressing and has left quite an impression on the fan community as a whole.