Can We Just Talk About amiibo for a Minute?

As of the day that this article is posted, today marks the one year anniversary of the Nintendo Switch and The Legend of Zelda: Breath of the Wild, which everyone seems to love!

Nintendo is trying to hype up their Nintendo Labo, and I’m genuinely curious to see how (or even if) it will bleed into anything else Nintendo has up their sleeves. It could be like the WiiFit Balance Board; had so much immersive potential, but ended up only having a handful of games for a pretty expensive piece of plastic and wires. Or, the Labo idea could take off like the amiibo – which are still doing pretty good. 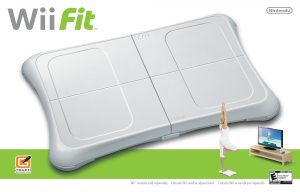 So much potential, so little usage.

But, okay, let’s just talk about amiibo for a minute. 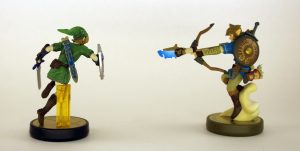 Link amiibo, then vs. now! 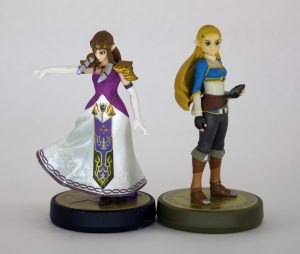 Zelda amiibo, then vs. now!

When the world first learned about the Wii U, one thing really stood out and everyone speculated what it would do: The NFC (Near Field Communication) built into the Wii U GamePad. The Wii U came out on November 18, 2012 in America and for almost two years, that NFC did almost nothing*. It was just something that was symbolized by a small rectangle and a bent line. And then, on November 21, 2014 (wow, they’ve been out for over three years!), America was able to get their hands on these little plastic figures that, by some sort of magic (Nintendo magic!), interacted with certain games. 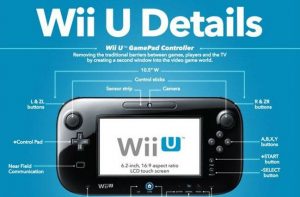 This was done with that built in NFC. When the amiibo first came out, only one game would work with them: Smash Bros. for Wii U (and eventually 3DS, with the required help of a separate dock, and then the New 3DS had the NFC built in) (also known as “Sm4sh Bros”). In Sm4sh Bros, you played as trophy figures of Nintendo characters, and the amiibo were made to look as close to these in-game figures as possible. It was a really neat idea that tried to blur the line between toys and video games; much like Skylanders, *Pokemon Rumble (which technically predated amiibo), Disney Infinity, Lego Dimensions, and other Toys-To-Life games. 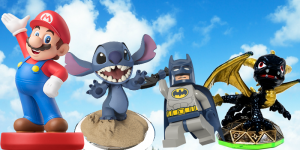 At the time amiibo first came out, my wife and I were saving up for our first house. So naturally it tore me up inside being both a Nintendo fanboy and collector, that I couldn’t get these. I was heartbroken. However, that Christmas, my wife gifted me with a few from the first wave and one of them was one of my mains, Link. I remember reading how odd it was that most of the amiibo had clear colored plastic to help hold them up; most confusing being Link’s. When I opened my Christmas gifts, excited to finally have them in my soon-to-be growing collection, I had to check out that bracer. While I was blown away by all the detail that was crammed into such a small figure (more on that in a bit); I was just as confused as everyone why it looked like my Hyrulian hero was leaning on a small tower made out of urine, or that he had a wii-ing problem. 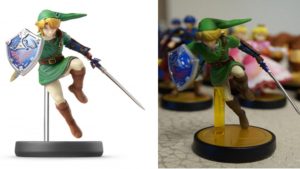 What we were promised vs. what we got 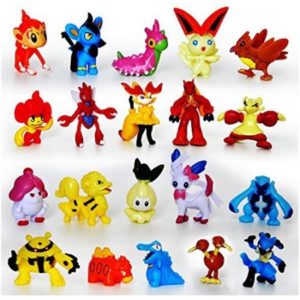 Even though the design choice seemed bizarre, it couldn’t take away from how good the overall figure looked. My fear was that it was going to mostly be a solid color, with paint apps only where necessary …like pants. Or that, if they were going to have paint, it would be applied so sloppily, details like belts will end up making the character look like a grandpa with a brown band above the belly button. But no, look at this! Not only are things like boots, straps, and chain mail painted correctly, but we even have shading! And hair that fades! Buckles are painted exactly where they need to be! There’s even texture SCULPTED into the figure! 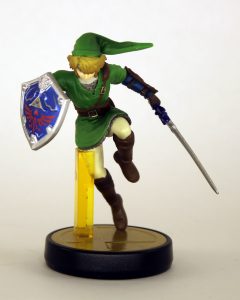 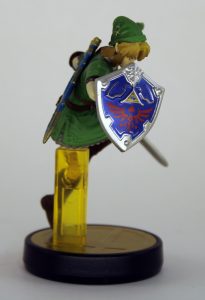 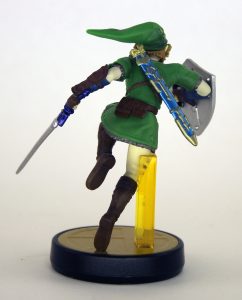 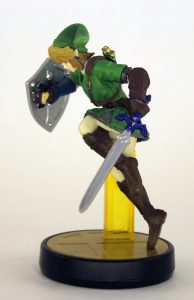 There is so much going on with this tiny little figure!

I was happy with the direction Nintendo was going with these because, not only were amiibo toys meant to activate something in-game – which, if that was only for, they could have just made them into cards with chips (*coughAnimalCrossingcoughcough*) – but they were also proving to be quite the collector’s item. People queued up in lines, waiting for stores to open Not just so they could be the first to get their hands on one of these, but sometimes just so they have one at all! Nintendo had severely underestimated how popular amiibo could become, which lead to many angry Nintendo faithful. Some people resorted to ordering amiibo from overseas; deciding that having a representation of their favorite character was more important than the cost to have it imported! That’s dedication!

The wailing and gnashing of teeth was heard loud and clear, and Nintendo increased amiibo production. When the second wave arrived, most of them turned out pretty well, and others… well, not so much, to be honest.

In my opinion, Zelda is feeling the pressure of increased production. Don’t get me wrong, it’s still a beautiful figurine; but there’s also quite a bit to nitpick about. The sculpt of her dress and the painting of her apron (/flappy flag thing/seriously, what is it called?!) is amazingly well done. The pearlescent shimmer, the shape of the billowing dress, the harp embroidery… fantastically executed! However, everything else is just kinda… not the best it could be and begins to look a little like what I was afraid they’d be. 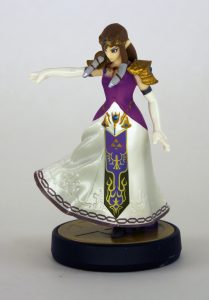 The pendant around her waist lacks any detail, the shoulder pads look messy. Where the top of her dress stops and her flesh begins is hazy. Her hair braids in the front are awkwardly thick like sausages, and her hands border on Micky Mouse gloves — those fingers are weirdly hotdog-like (okay, I’m getting a little hungry while writing this, but my point still stands)! Also, there are legs under her dress, and there is line sculpting on them, but no paint apps. Also, a purple bracer on her left foot. 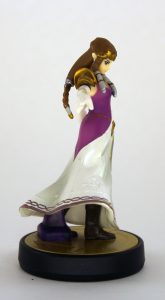 All that said, her broach does look nice, those sharp lines are nearly impossible to paint, but looks like it was done by a pro; the back of her hair is sculpted nicely, and the small of her back has a very nice shading effect. 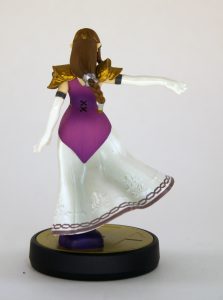 Most of that sounded very harsh, and I almost feel bad for saying it, but Sm4sh Bros Zelda really looks best when she’s somewhere in the back of your collection. And I only say that in comparison to how well Link was handled. 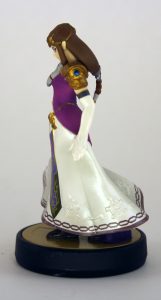 But luckily, when a new Nintendo game comes out, there’s the possibility of new amiibo! A second chance! Redemption!

And what a second chance redemption it was!

Breath of the Wild 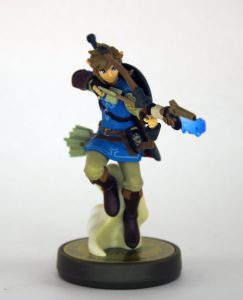 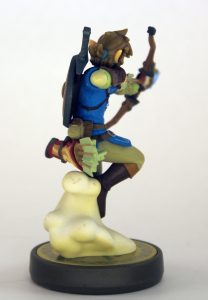 I seem to have got a little scuffage on the kicked up dust. Oops.

First, comparing the Sm4sh Bros Link to the Archer Link from Breath of the Wild. There is so much more paint detail going on with Archer Link, it almost makes the Sm4sh Bros Link look dull! The Master Sword pattern on his tunic is masterfully (heh) done, as well at the Gerudo-style banding around his arms. The belts and straps are colored inside the lines like a pro, even all the details on the Ancient Arrow look great! And just look at that Shiekah Slate! I mean, yeah, there’s only so much detail you can cram into such a small area… and boy they tried! Granted, the only shading I can notice is done on the dust kicked up around Archer Link’s feet – which acts as a very smart way to take care of that particular bracer issue. No pee-sticks here! 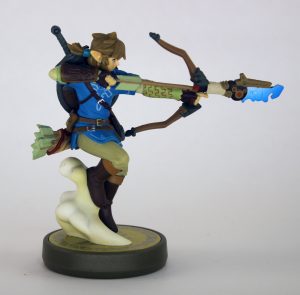 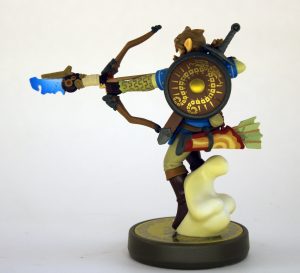 Is that a pregnant ghost? 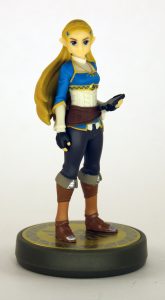 Now on to Zelda, and may I say, Breath of the Wild’s Zelda has to be my favorite Zelda, and I think the amiibo makers agree with me. There is so much more care and attention to detail in this one. Her posture gives the sense of confidence, with back straight and shoulders pulled back, as well as someone hungry for knowledge by the way she holds the Shiekah Slate. The wrinkles on her sleeves fold realistically, the sculpted padding on her… cummerbund and chest-plate? Is it all a one piece tunic, or several different pieces?… (Okay, side-note, what the heck is going on with every Zelda’s wardrobe? Did the royal taylor get tired of just doing fantastic and functioning clothing and just decide to “challenge him/herself creatively?”) are beautifully rendered. 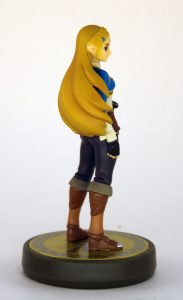 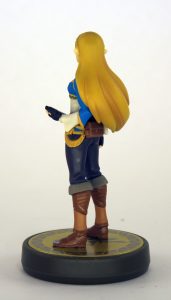 Looking at the tiny Zelda, you can almost feel the very wind that blows through her hair and the sunlight that dances upon it, thanks to the subtle shading of lights and darks in the back. If you look closely at the Shiekah Slate she’s holding, while it’s not displaying anything, you can tell the the Slate has the border around where the screen would be. Given that there’s so much going on with the the character already; it makes sense, artistically, to not have anything on screen as that would probably be way too much. Every time the eye would be grabbed toward the display. A small rectangle of color might’ve been nice, but perhaps the Slate is currently powered down. 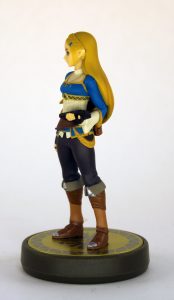 I have to say that the Breath of the Wild amiibos are improved far more significantly over the Sm4sh Bros line. Which isn’t a huge revelation, most things do get better with time and practice, but it’s always nice to look back and see where things have been, where they are now, and wonder where they could be in the future? Could we get World of Nintendo figures with amiibo chips in their feet? Who knows! We already have stuffed Yoshis and cereal boxes with NFC chips! 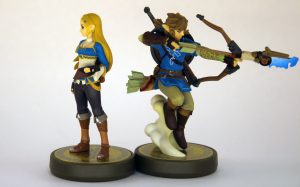 Did I miss something? Want to see more? Let me know in the comments or somewhere on the Internet!