Avengers Disassembled – A Critical Analysis on the MCU

For a decade now, the Marvel Cinematic Universe has greatly dominated the box office while receiving high praise reviews. With their recent blockbuster hit, Avengers: Infinity War (2018), it looks like the MCU won’t be stopping let alone slowing down anytime soon. Being a comic book fan, I greatly enjoy seeing some of my favorite DC and Marvel heroes on the big screen. It’s absolutely fascinating to see the characters I grew up reading come to life. That being said, as the years have passed, I’ve found that though I still enjoy the MCU I’ve found myself criticising a part of it.

Disclaimer: No, I am not anti-Marvel, and no, I am not a DC fanboy (they have their problems and they are much worse than Marvel’s). What I am saying is that since the end of the first MCU phase in 2012, the MCU films have become formulaic and highly predictable. This article will focus on the constructive criticism of the Marvel Cinematic Universe and where the franchise falls short in certain areas. So let’s assemble–or disassemble in this case–and go through the topics. 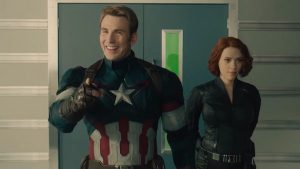 Throughout comic book history, there have been countless stories that go into the depth of philosophy, theology, spirituality, politics, character development, and so much more. The MCU has every advantage to adapt these story-arcs–yet they haven’t.

With the exception of Iron Man (2008), Captain America: Winter Soldier (2014), Captain America: Civil War (2016), Doctor Strange (2016), Black Panther (2018), and Avengers: Infinity War (2018), a large amount of MCU films have fallen short of being something extraordinary in storytelling. There is a heavy reliance on quipping and slapstick moments that take away from the deep and serious moments. I am not saying that I don’t like comedy or a laugh in a movie, but where a joke or laughable moment is placed is absolutely crucial.

A small example that I will give is in Infinity War when Gamora tells Star-Lord that she knows something others don’t about the Infinity Stones and that if her father, Thanos, gets a hold of her Peter is to kill her. It is a very serious life or death conversation between the two…and then is quickly overlooked by Drax standing there eating and explaining how he is “invisible.” A joke like that does not belong in a scene that serious.

Throughout Avengers: Age of Ultron (2014) quipping dominated the film while the depth fell apart. There are so many themes that could have been expanded upon such as Artificial Intelligence and the question of humanity being worth saving. We get small glimpses of this but again, they are quickly overlooked with a quick joke and a laughable moment between characters. Of course, it was entertaining and good, but it could have been great and worth remembering.

Let me be clear that quipping and laughable moments work for some films. In Ant-Man (2015) and Guardians of the Galaxy Vo. 1 & 2 (2014 & 2017), quipping definitely works in those movies throughout. It makes sense for those films, but not for others like Thor: Ragnarok (2017). What could have been a great movie on unity, national pride, and sibling rivalry is quickly overlooked with the movie being a comedy. 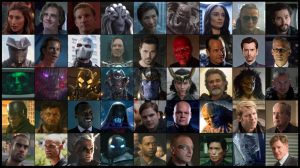 What I will say about the MCU is that they really nailed the villains in 2017 and 2018 with Ego, Vulture, Killmonger, and Thanos. As for the films prior, the only ones who’ve significantly stood out have been Loki and Ultron to a certain degree. The difficulty is that a large number of their villains are one-dimensional. They are only in the story for the sake of being a villain, nothing more.

Villains are more than simply evil. They can be relatable or have sympathy, and so on. There can be something more. How often do people really remember villains like Malaketh, Ronan, Kaecilius, and Whiplash in the MCU? (The funny thing about these villains is that I had to google their names to remember who they were. That’s how unmemorable they were). The irony about some of these villains is that in the trailers, they had great portrayals of being great threats to the hero, like Hela, The Mandarin, and Kaecilius. Instead, they are one-dimensional. There isn’t a great build-up or interesting clash between the villain and the hero.

A large factor in the MCU villain one-dimensional problem is the amount of screen time that they have. It is very short (40 minutes or less) in a film that expands nearly or over two hours. Am I saying that more screen time means a better villain? Not at all. Just look at Suicide Squad (2016) for that. What I mean is that more screen time means more time to develop. More development means more of an impact. More of an impact means being memorable. Good example, Thanos. A better example, The Joker in The Dark Knight (2008). When a villain is complex, the hero has to work harder, because they are now forced to interact and be in opposition throughout the story. No, I am not saying that a story has to be dark and gritty to have a dark villain. Just look at Ego in Guardians of the Galaxy Vol. 2 (2017) or Kilmonger in Black Panther (2018). But just because the film isn’t dark, doesn’t mean the villain shouldn’t be either. 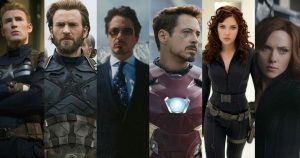 The hero is one of the major focuses if not the main focus when it comes to comic books and adaptations. If the hero isn’t thoroughly liked, then they are going to fail to be loved by the readers and viewers. So far, the MCU films have been beloved by a large number of people and even for me, there are those that I thoroughly enjoy. So, what is the problem? While some heroes have greatly stood out, there is much more that could’ve been done to make them unique.

One difficulty that I noticed with these heroes is how quickly their training montages are when heroes gain new powers. Some don’t even have that, like Black Widow and Hawkeye, which makes them less interesting since we don’t know much about them. As for the quick training montages, let’s look at Ant-Man for example. Scott Lang’s training montage is one that is quick to get through. While it is funny, it’s not impactful or memorable. One scene, in particular, is when he is training himself to communicate with the ants to move the sugar cube into the coffee. When he fails, he tries harder to concentrate, and it works. Cool, but where is the motivation? Simply trying harder is too easy let alone a cop out, and similarly, it can be said in other MCU films like Doctor Strange (2016) and even other superhero films like Batman Begins (2005).

A better example of this type of training through concentration is from X-Men: First Class (2011) when Erik tells Charles to shoot him so he can deflect the bullet. Charles says, “If you know you can do it, then you’re not challenging yourself.” When he tells him to move the large satellite, Erika fails. Charles believes that “the true focus lies between rage and serenity.” When he goes into his mind, Erik doesn’t remember the memory he has that is both painful and full of serenity. Charles reminds him that there is much more that can be done than just acting out of rage. With that balance, Erik moves the satellite successfully. Furthermore, the balance of rage and serenity plays a key part throughout Erik’s character development from becoming the protagonist to the antagonist. That is how a good training scene does it, allowing audiences to relate and have the emotional connection to the hero.

Another area that greatly contributes to the lack of character development is the faceless armies the hero fights off to save the day. Captain America: The First Avenger (2011), Avengers (2012), Avengers: Age of Ultron (2014), Guardians of the Galaxy Vol. 2 (2017), and Thor: Ragnarok (2017). While it makes sense for a villain to have a large army to fight off the hero, it takes away from the hero facing consequences of nearly taking a life. It makes sense to a degree in Avengers 1 & 2 since the cast is large, but takes away that focus in the first Captain America and Thor Ragnorok. Primarily in latter, Hela raises the army from the dead to be her force since the Asgardians didn’t side with her. Easy kills for Thor and the Hulk.

What would have been greatly impactful is if a solid amount of the Asgardians stood alongside Hela, longing to relive the glory days of being conquerors. It would have been interesting to see Thor being forced to fight his own people, hence making his father’s quote about Asgard identity being its people more impactful. Heroes have to have a something to learn from all the time to truly master their abilities and while some MCU films got it down–i.e. Iron Man, Spider-Man: Homecoming (2017), Captain America 2 & 3–the same can’t be said for all let alone most.

One big factor to these noticeable trends in the MCU is one that is understandable, but also flawed. Aside from the fact that Walt Disney Studios owns Marvel Studios, Marvel films have become increasingly popular. Because of that, the last thing anyone at the studio wants is a flop or a time when they go downhill. Rather than giving challenging stories, they keep it very black and white. If there is any critical thinking, it’s once in a while or very limited. Examples are the latter two Captain America 2ilms, where a large amount of ethics come into play. This is not to say you can’t have a simple and fun movie, but a lot of MCU films have been that way–simple and fun. When a movie challenges an audience to think critically and gives them a reason to be thoroughly engaged beyond explosives and punches, then there is something profound and memorable.

I am a huge comic book fan and always look forward/hope for the best in upcoming superheroes films, despite track records because some can be greatly surprising. However, just because I am a fan, that doesn’t mean I stand by all superhero films 100% on everything. As someone who is a cinephile, analyzing movies is something that is absolutely amazing, whether or not the film is good. I think that as fans of beloved franchises and even as Christians, having constructive criticism is something that we should definitely express, whether we are defending a certain topic and calling it into question.

What are your thoughts or Criticism on the Marvel Cinematic Universe? Agree or Disagree?