Welcome back to another edition of “Boom, Bust, or Meh.” If you are new to the series, “Boom, Bust, or Meh,” is a monthly article that looks at five different theatrical releases, then our staff predicts how each film with perform, both financially, and critically.

Each film receives one of the following scores:

Boom: So good it explodes.

Bust: So bad it breaks.

Meh: So average that you start feeling average.

This month, Nestor Arce and Trey Soto rejoin us. Enjoy.

Chris: On my radar, but haven’t seen it yet. Everest has quietly gained its budget back, and didn’t totally fail at the box office either.

Chris: Sort of hailed as an M. Night comeback, but it’s going to take more movies to bring back his old glories.

Chris: Sicario had an extremely promising limited screening opening. We can only expect great things from here out.

Chris: No one was expecting Inside Out, but Hotel Transylvania 2 performed as well as expected to the audience it expected. 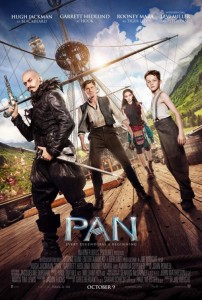 Synopsis: The story of an orphan who is spirited away to the magical Neverland. There, he finds both fun and dangers, and ultimately discovers his destiny–to become the hero who will be forever known as Peter Pan. (Rotten Tomatoes)

Pan “reboots” the Peter Pan franchise, but mostly tries to put a new spin on a very familiar character. Hugh Jackman steps into a villainous role as Blackbeard. Director Joe Wright has experience from Atonement, Pride & Prejudice, and Anna Karenina.

I don’t feel good about this. CGI looks over the top and let’s be honest, it’s really difficult for a child to carry a film, even if it’s a movie shot for the family. I could be wrong, but I also think Hugh Jackman might regret signing on for this one. I’m not totally sure what seems off to me, but I suppose time will tell.

Origin movies have been all the rage the past couple of years, but who would have thought that an origin story based on Peter Pan would look good? I’m actually interested in watching this to see how the rivalry between Pan and Captain Hook began. Judging from the trailer it looks like the movie might hit some pretty dark territory regarding this aspect of the movie. I’m in and I’m gonna bet that the film will be a box office success.

Within the past 3-5 years, live adaptations of classic Disney animation films have either failed miserably or were mediocre. This idea that, “What if [insert character name here] had a backstory portraying why they are who they are?” is starting to become a real bother. Is a backstory really necessary? The characters are fine the way they are and have been successful being that way so I don’t see the need for a backstory here either. While the visual effects are amazing, I am not convinced that Pan will succeed as a live action prequel adaptation due to the plot and change in characters. 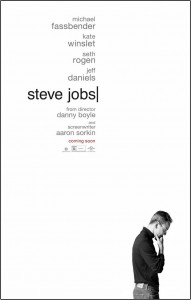 Synopsis: Set backstage at three iconic product launches and ending in 1998 with the unveiling of the iMac, Steve Jobs takes us behind the scenes of the digital revolution to paint a portrait of the man at its epicenter. (IMDB)

His passion and ingenuity have been the driving force behind the digital age. However his drive to revolutionize technology was sacrificial. Ultimately it affected his family life and possibly his health. In this revealing film we explore the trials and triumphs of a modern day genius, the late CEO of Apple inc. Steven Paul Jobs. (IMDB)

Oh, good. A gritty Steve Jobs drama to trump Ashton Kutcher from a few years back. I love Michael Fassbender, and director Danny Boyle and writer Aaron Sorkin have a great track record. I’m not sure I can see this going horribly wrong, but it might not be amazing. Look for great casting and directing, and remembering how great Apple used to be.

Another Steve Jobs movie, although this one looks to be more true to form than the one that was released with Ashton Kutcher in 2013. Danny Boyle directs, and judging from the trailers it doesn’t seem to pull any punches in its seemingly mean-spirited, but vulnerable portrayal of the technological wizard himself. Michael Fassbender stars as Jobs himself. If the cards are played right, this could be a decent contender come Oscar time.

Despite the box office of Jobs back in 2013, Hollywood is trying again to get a movie revolving around the life of Steve Jobs. Based on the trailer, the soundtrack, and the actors, I believe that this will not only be a step up, but a major improvement that will become a hit on its own. Michael Fassbender’s appearance and acting for the roll of Steve Jobs looks believable as well as accurate, from having a young appearance to wearing the tight blue jeans and black turtle neck sweater. 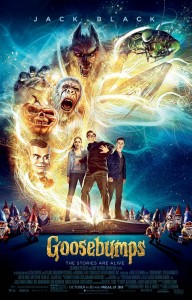 Synopsis: A teenager teams up with the daughter of young adult horror author R.L. Stine after the writer’s imaginary demons are set free on the town of Greendale, Maryland. (IMDB)

Upset about moving from a big city to a small town, teenager Zach Cooper (Dylan Minnette) finds a silver lining when he meets the beautiful girl, Hannah (Odeya Rush), living right next door. But every silver lining has a cloud, and Zach’s comes when he learns that Hannah has a mysterious dad who is revealed to be R. L. Stine (Jack Black), the author of the bestselling Goosebumps series.

It turns out that there is a reason why Stine is so strange… he is a prisoner of his own imagination-the monsters that his books made famous are real, and Stine protects his readers by keeping them locked up in their books. When Zach unintentionally unleashes the monsters from their manuscripts and they begin to terrorize the town, it’s suddenly up to Stine, Zach, and Hannah to get all of them back in the books where they belong. (Sony)

So, I actually feel pretty optimistic about this. It’s not revolutionary, but the trailer feels and looks fun for a kid’s animated horror comedy. I adore Jack Black, and this will definitely be a better movie than Adam Sandler’s Pixels. Adam? Are you listening? If you ever want to adapt something again, take notes.

Strangely enough, I actually liked Goosebumps as a kid. I loved the cheesy horror elements that the show wasn’t afraid of pulling on its young audience. Sadly though, this film adaptation looks to be more of a cookie-cutter CGI fest. I’ll pass.

While the film does look fun and enjoyable, I am unsure if it will capture the magic of the actual books. Just by watching the trailer, there looks like there will be an awful lot of witty one-liners and a cheesy, up-beat soundtrack. It looks almost as if it is a Night of the Museum knock-off than a new type of film for families. 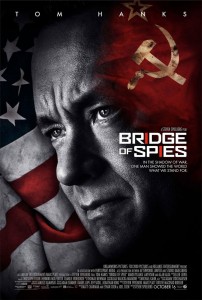 Synopsis: An American lawyer is recruited by the CIA during the Cold War to help rescue a pilot detained in the Soviet Union. (IMDB)

Bridge of Spies is packed full of talent. The Coen brothers team up with all-time great, Steven Spielberg. There is a lot going for this one, and some might decry it as Oscar bait, but Bridge of Spies feels very unique.

Something feels off about Bridge of Spies. I’m going to label it a BOOM, but something seems different about this one. Steven Spielberg and Tom Hanks are absolutely great together, and we must mention the Coen brothers on writing credits. Everything on paper looks great, but do yourself a favor and skip the trailers. Go see this one blind. I also want to drop a plug here for Twilight Struggle, which is a great situational-strategy game from GMT about the Cold War. I couldn’t recommend it enough.

I dare you to name one, just one time, where a Hanks-Spielberg collaboration has failed… I thought so.

You can never go wrong with a film that is based on a true story during one of the most darkest and dangerous times in world history. This is not the first time that Director Steven Spielberg and actor Tom Hanks have worked together in a film and when they have, they have not failed to disappoint. A film with this good of a cast let alone plot and time period in history, it looks just about impossible for this film not to succeed. 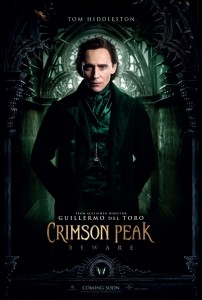 Synopsis: In the aftermath of a family tragedy, an aspiring author is torn between love for her childhood friend and the temptation of a mysterious outsider. Trying to escape the ghosts of her past, she is swept away to a house that breathes, bleeds…and remembers.

When her heart is stolen by a seductive stranger, a young woman is swept away to a house atop a mountain of blood-red clay: a place ﬁlled with secrets that will haunt her forever. Between desire and darkness, between mystery and madness, lies the truth behind Crimson Peak. From the imagination of director Guillermo del Toro comes a supernatural mystery. (Universal)

Guillermo Del Toro is a master of his genre craft, and we know this because of Pan’s Labyrinth. Here we have a stacked cast with an insane trailer just busting at the red band seams. Del Toro is plenty graphic with his storytelling, and Crimson Peak fulfills its bloody title just by one watch of the trailer. This likely won’t be a must-see for most audience members, but I’m excited to see the incoming early reviews.

Guillermo Del Toro is one of the most talented (and sadly, often underrated) visionaries in Hollywood today. I tend to be very picky with horror movies, but when done right, they can often be a real treat. Del Toro is a man that knows horror (in fact, his name is synonymous with the genre at this point). Crimson Peak has been getting some good early buzz and I hope that enough people watch it so Warner Bros. and other studios can regain confidence in going forward with Del Toro’s future projects like Pacific Rim 2 (and Hellboy 3, perhaps? A boy can only dream…)

While it looks as if there will be jump scare scenes, that looks like all there will be. The acting looks okay as well as the plot. Nothing that will really stand out for audiences from the looks of it other than another okay scary movie to put on the shelf.

Thanks for reading this month’s edition. What are some of your predictions? Are any of these movies on your must-see list? Join us next month for another addition to “Boom, Bust, or Meh!”