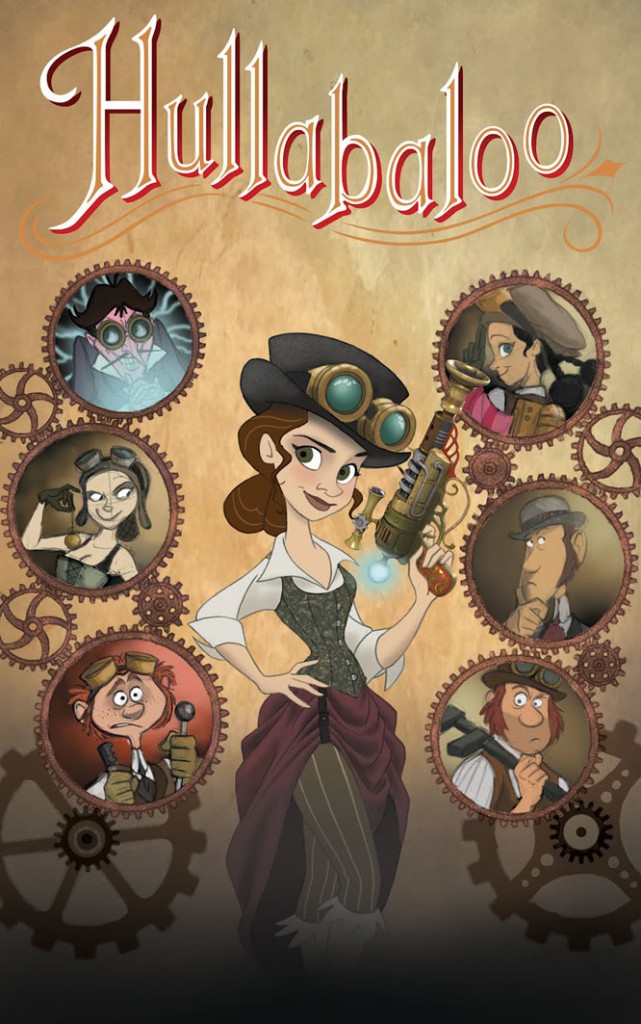 The short film—a Victorian sci-fi, otherwise known as “steampunk”—follows the adventures of Veronica Daring, a talented young scientist, and daughter of a brilliant, but quaint, inventor. After her father is kidnapped by a group of mysterious intellectuals, Veronica takes on the persona of “Hullabaloo,” an enigmatic heroine empowered by her knowledge of science and her drive to rescue her father. At the heart of the film beats the theme of technology and Veronica’s personal motto that it be “used for the good of all, not the greed of some.”

The team behind the project currently includes six Disney animators and two CG modelers with credits from prominent Disney features, including The Princess and the Frog, Frozen, and Beauty and the Beast. Manel Gil-Inglada, who won the 2010 Jerry Goldsmith award for “Best Music in a Full Length Format,” will be providing the musical score. Among the cast of talented voice actors are Yuri Lowenthal (Naruto, Bioshock Infinite, Prince of Persia), G. D. Falksen, and Mary Robinette Kowal.

Beyond simply being a resurrection of fading 2D animation, Hullabaloo aims to provide girls with powerful role models. “The film’s two protagonists are both young women and both scientists who use their intellect, wits, and courage to fight greed and corruption,” says Lopez. “We hope that [they] will serve as positive role models for girls of all ages and encourage them to get excited about science, engineering, and sci-fi.”

Hullabaloo is currently seeking funding via Indiegogo and has already surpassed its original goal. As incentives, the fund-raiser offers a variety of tempting goods, including signed prints, art books, T-shirts, original sketches, a signed copy of the script, live animation classes over Skype, and even production credit at the film’s end. For a donation of only five dollars, contributors can get an advanced, online screening of the final production.

Providing that the initial funding exceeds the $80,000 amount, the project team has plans to complete specific stretch goals—two additional animated shorts and a fully orchestrated soundtrack for both shorts.

“Initially, what I want to do right now, is to make a short film with aspirations to expand and become possibly a web series, television show, possibly even a feature if enough support gets behind it,” says Lopez about Hullabaloo. The idea is to create a short film, showcasing the world of Hullabaloo, that the project staff can show to potential investors. To Lopez, the ultimate goal is creating a full-length feature film for the project and bringing about a revival of 2D animation. In his own words, “This particular production is unique because it involves hand-drawn animation, which—I hate to say—is slowly becoming a dying art. What I’m really looking to do is create a show that can showcase the best of 2D animation.”

The Hullabaloo project will be collecting funding through October 1st. For additional information, and to contribute to the film, please visit: https://www.indiegogo.com/projects/hullabaloo-steampunk-animated-film