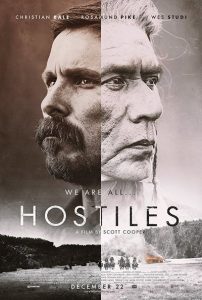 A good Western is as rare as a politician who lives up to their campaign promises. When I saw the previews for Hostiles, I was eager to see it. With Christian Bale and Wes Studi, who wouldn’t be excited about this gritty film?

Violence/Scary Images: The director does not hold back in battle scenes. A family is violently massacred in the first few minutes, including an infant shot in the head in its mother’s arms while the father is scalped. Indians are shown hanging from trees, and there is a kidnapping and brutal beating with implied rape. There is an offscreen suicide, but the finding of the body shows the hole in the temple.

Language/Crude Humor: The F-word makes a presence in the first half of the film, but dies down. Also, d**n, h**l, b*****d, and b***h also make it into the film a handful of times. God and Jesus’ names are both used in vain.

Spiritual Content: Quaid, though she’s watched her entire family’s murders, clings to her faith in God. Blocker’s Captain believes in God, but doesn’t feel His presence: “But He’s been blind to what’s going on out here for a long time.” A soldier sings hymns and quotes scripture after Quaid’s family is buried.

Sexual Content:  There is one scene where the widow Mrs. Quaid and Captain Blocker share a tent. She leans into him and brushes the hair from his face.

Drug/Alcohol References: Soldiers drink hard liquor from tin cups and a couple of them smoke cigars.

Positive Content: Forgiveness and understanding is the path we all need. Even after over twenty years of fighting and feeling justified for their own side, the main characters come to terms through their journey. Life isn’t about being “right” all of the time, because justice is often in the eyes of the beholder.

In 1892, New Mexico is not a colorful or soft life. The film opens in the yellow harsh flatlands. The U.S. Army barracks are full with captives and the soldiers who hunted them down and threw away the keys. For over twenty years, Captain Joe Blocker (Bale), relentlessly tracked down Indians, taking just as many scalps as their warriors. There is no loss of love between Blocker or the prisoners—especially with the Cheyenne Chief Yellow Hawk (Studi), whose slaughter was as rampant as his captor’s.

Though the Chief has been behind bars for years with his family, Blocker is ordered to deliver the Chief to his home in Montana, as he dies from cancer. The party finds Mrs. Quaid (Pike), the lone survivor of an Comanche massacre, at the onset of their journey. Through their trials, their expedition is not one of only miles, but of prejudice by justification depending on which side you view. In the end, being right makes no difference, but mercy and understanding is not something easily gained.

Christian Bale is of course realistic in his portrayal of Captain Joe Blocker, from the way he smooths down his greasy hair, to the anguish over a particular death. The hatred rolls from the screen when he lists the names of the men under his command who have been murdered by Indians. Rosamund Pike beautifully crafts the widow Mrs. Quaid, her echoing agony of watching her own family’s slaughter. Pike plays a strong, yet broken pioneer woman, working past her own prejudice of race, discovering the people beyond the skin color.

Wes Studi, yet again, nails another roll as the fictional Chief Yellow Hawk. He has long forgotten the animosity that Blocker clings to and works to show the Captain that people can change, even as they are dying. With an excellent, supporting cast including Adam Beach, Q’orianka Kilcher, Rory Cochran, and Ben Foster, the only thing slowing this film down is the pacing—quite literally. Though the message is deep, each move is easily predictable

Unlike most films, this one was shot sequentially, starting in New Mexico. Though Fort Berringer in the film is fictional, it directly mimics Fort Selden, where black soldiers, referred to as Buffalo Soldiers, were stationed. Cinematographer Masanobu Takayanagi provides sweeping, burnished frames that help set the mood. Nearly the entire film is shot outdoors. Though the cut scenes of the party working their way from New Mexico to Montana (shot in Colorado) are necessary, they are lengthy and numerous. 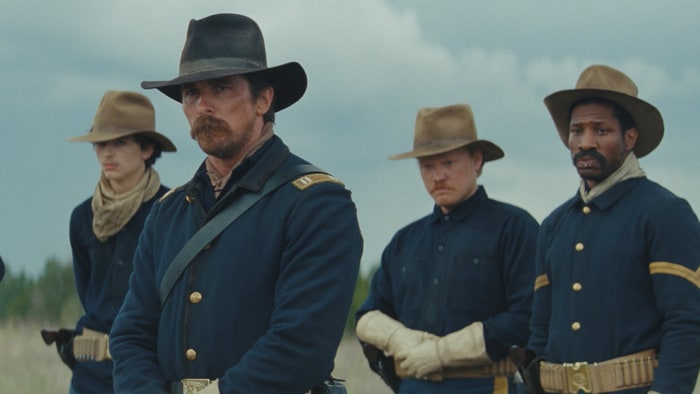 Very few visual effects feature in this film, other than the stellar battle scenes and a freakish and expected rain storm. The film tracks scenes from the ruthless desert to the green mountains, mirroring Blocker’s transition from absolute hatred to understanding. It is interesting to note that Bale took director Scott Cooper, who also wrote the screenplay, to task over the ending of the movie, arguing against the closing shot. Ultimately, Bale conceded, and the viewers are satisfied.

The 18-song soundtrack for Hostiles is original music composed by Max Richer. It also includes a single written and performed piece by Ryan Bingham. There were moments the soundtrack seemed to bog down the storyline, but the director’s cut scenes would’ve otherwise seemed awkward without the music.

For the moral of the story alone, I’d recommend this movie to anyone in the late teens and higher, due to the graphic violence and swearing. Director Cooper held nothing back for the fight scenes. Though the acting is amazing and the scenery breathtaking, the plot is predictable within the first few minutes, every step laid out before the next, scene by scene. But viewer beware of the pacing, this is a movie that seemed to drag on longer than the 2 hours and 14 minutes.

Do not expect a quick Western fix on this film. You're in for a long haul with this righteous story.