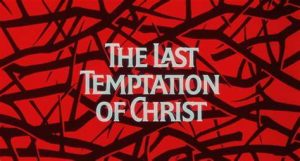 And we know that in all things God works for the good of those who love him, who have been called according to his purpose. —Romans 8:28

In the opening minutes of Martin Scorsese’s The Last Temptation of Christ, we’re treated to a very different version of Christ’s origin than the one the Bible gives us. Instead of the gentle, intelligent young boy seeking knowledge from the temple, we’re treated to a young man working as a carpenter for the Romans to help crucify the Jews. This version of Christ is interpreted as almost fully Human. He lusts after Mary Magdoline when he first meets her as a prostitute. He’s haunted by God as a being that follows him, pushing the young Christ to embrace his undesired destiny. He doesn’t want this fate. While he does come to embrace it and explore what it means, he’s still constantly barraged by temptations.

The Last Temptation of Christ is one of the most controversial religious films of all time. It was famously excoriated by the religious right in the 1980s for its casual blasphemy, its rampant nudity, and a revisionist vision of the story of the Bible. The film went into production twice. In the first attempt, the film’s studio was flooded by letters and death threats from aggravated Christians. When the film was finally able to get underway with a significantly lower budgeted, further protests of the film came from a massive Christian backlash against the film, which included protests by televangelists and religious leaders.

At its worst, some protestors assaulted a group of moviegoers resulting in multiple injuries. The Catholic Church went as far as to declared the film “morally offensive’ saying “nothing would be gained by viewing it”. The reaction wasn’t shared by secular Hollywood. Gene Siskel and Roger Ebert famously reviewed the film positively, stating that it was a religious experience that validated Christ’s message (Ebert being a lapsed Catholic who also gave The Passion of the Christ a positive review). Overall, the movie was well received by Hollywood.

So what’s going on here? How can Christian moviegoers and critics have such wildly different opinions? How can a Catholic filmmaker make a film denounced by his own church? What does the film even mean in the first place? 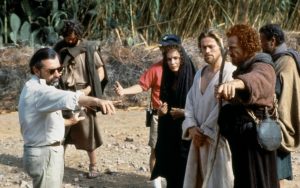 Martin Scorsese is a Catholic who is deeply conflicted about how he ought to live out his faith. As such, he’s a devotee of filmmaking first but his work has always been infused with a sense of Catholic guilt. His films in spite of their oft violence and sexuality are infused with an innate sense of moralism and a desire for justice. In the case of The Last Temptation of Christ, the topical nudity and controversial content aren’t being placed in proximity to Christ as a means of degrading the image of God.

It’s worth considering just how Martin Scorsese handles morality in his films. Scorsese is often blasted as a director for his casual use of sex and violence in his movies that seems to endorse the actions of the characters he’s depicting. It’s easy to make this mistake given that his movies frequently depict despicable mobsters, corrupt businessmen, and men who regularly abuse their spouses. In the context of these stories however, these characters always end up the condemned by the events of the story. Henry Hill in Goodfellas doesn’t benefit from a life in the mob. Jordan Belfort in Wolf of Wallstreet doesn’t end the story on the moral high ground. Travis Bickle doesn’t make his life better in Taxi Driver by becoming a vigilante. Scorsese is operating on a nuanced level of storytelling that condemns the actions of his characters within the context of the stories he’s making but speaks to their lives honestly. 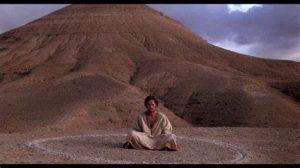 Controversially, Scorsese seems to understand that sin is appealing. He’s drawing his audience in seductively so he can narratively pull the carpet out from under them. Unfortunately, these morals are usually buried under three-hour runtimes and densely plotted stories. As it stands, most Christian audiences don’t want to see a depiction of Christ who doubts seriously or is seen in frame with people committing sexual sins. Maybe that can be accurately described as irresponsible as a director but the directors rarely know how their work will be received.

Scarface and Fight Club are both satires that use this same narrative trick but they’re widely embraced as though they were unironic endorsements of wealth and anti-establishmentism. In the director’s commentary of The Last Temptation of Christ, the screenwriter Paul Schrader (who directed last month’s Flawed Faith film First Reformed) says as much when he casually dismisses claims of blasphemy in regards to the film’s content. He admitted though that the film’s portrayal of Christ does skew slightly in regards to its portrayal of God as entirely man. If we’re going to talk about the innate controversy of this film, this is the best place to start.

We already discussed in the introduction how different the film’s vision of Jesus is. Compare and contrast this with the version of Christ in a more traditional Biblical epic such as The Greatest Story Ever Told which paints his work in far more romantic terms, filling the screen with grandeur and epic visions of the events of the Gospels. There have of course been Hollywoodized alterations of the story in different adaptions of the Gospels. Ben-Hur famously told the story from the perspective of a man living in Judea/Rome at the time of Christ. The famous Italian 1964 adaption The Gospel According to Saint Matthew (directed by Marxist/atheist director Pier Paolo Pasolini) skewed the movie’s ethics into a classism story, highlighting condemnations of the rich while still following the events of the Gospel. The Last Temptation of Christ is almost entirely revisionist. It’s recasting the character of Christ as a human being who has to react to all of the temptations and events that the figure of Christ endured. Biblically speaking this doesn’t jive well for a lot of people and that’s understandable. 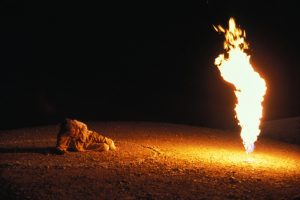 What’s important to ask though is what this is all in service to. Why would a lapsed Catholic, struggling with his face have the gumption to rewrite the story of Christ and explore it so radically? Maybe that’s the wrong question though. Maybe a better question is, Why wouldn’t a lapsed Catholic direct a film that questioned Christ’s internal journey? Maybe it’s because in doing so it gives us a chance to look through the eyes of Christ and understand his brief time on Earth as a human would see it.

Consider the ending. The movie builds up to the titular “Last Temptation” throughout the film. While the characterization of Christ, Judas and Mary Magdoline is altered from their biblical versions (Judas is portrayed by Harvey Kietal of all people), the plot mostly follows the events of Christ’s journey in Israel. The temptation comes, of all places, between the moments on the cross where Christ cries out that he has been forsaken and where he says that “It is finished.”

In a moment of agony, an angel appears before him and offers Christ the chance to come down off the cross. He says that he’s endured enough and is offered a chance to live an alternate series of events wherein he falls in love with Mary Magdalene and has a normal life. Without totally spoiling the film’s finale, this alternate timeline devolves into a Hell on earth. As revisionist as the story is, this ending is all about affirming the mission of Christ. It suggests that his mission was entirely necessary. Without Christ, the world cannot attain salvation and slides into a worse fate than it would’ve without him.

If the mission of The Last Temptation of Christ is anything, it’s about exploring the anxieties and questions that come with doubt. The film as a whole is largely spent airing the space between not wanting to believe and embracing salvation. Most of the film’s runtime is spent depicting altered versions of major events from the New Testament. At one point, for example, the film radically alters the dynamic between Jesus and Judas from the Bible. In this version, Jesus urges Judas to betray him so that he can fulfill his destiny. This isn’t biblical but its part of the film’s ultimate goal of bridging the beginning and end of faith. It revises the Biblical story so that it can address questions about free will and the nature of Judas’ betrayal.

This ends up being a huge amount of the films’ runtime. We’re left to listen to serious discussions about the nature of faith and Christianity. It’s immensely difficult and challenging stuff for the average viewer to put up with. Even after watching the film twice myself I  have difficulty following the symbolism and complex discussions the film is trying to propose. A casual viewer could look at the totality of this movie and honestly believe the movie is blaspheming against them and they wouldn’t be wrong for doing so. That said, Scorsese decidedly isn’t trying to damage the name of Christ. He’s asking painfully deep questions.

As Christians, the lesson we need to take away from this is one of kindness and tolerance. It’s understandable to call out casual blasphemies but all too frequently we don’t distinguish between doubt and disdain. As controversial as this movie takes its content in the name of understanding the nature of Christ, we as Christians cannot allow ourselves to lash out at those who are struggling in the faith. Those who are tempted to stray from Christianity need understanding. I speak as someone who has walked the path of a struggling Christian, alienated from Christian culture. I know people who have left their faith because they felt alienated from their churches for various reasons. It’s all too easy to leave the church in modern life when you can just drown yourself in the world to make the struggles of modern life fade away. When the church fails, it leaves those who struggle the most deprived of hope.

The Last Temptation of Christ isn’t a Christian film. It’s a movie by a struggling man desiring to express his anxieties and frustrations with faith in a way that others could understand. By rooting its anxieties in Christ, it highlights the importance of His mission on Earth. It shows that even without a perfect Christ, the mission of salvation was necessary and that in our pursuit of it, many of us will hurt and find it difficult to understand God’s will. As a cry for grace and peace in a world defined by sin and hatred, the movie represents one of the most pressingly beautiful explorations of faith in cinematic history. 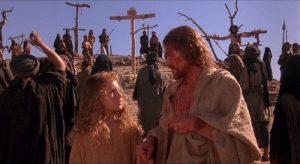