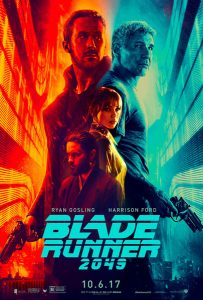 I’d been anticipating this movie before it was even announced. A fan of the original film (Our Review), I knew there just had to be a sequel somewhere down the line. The runtime didn’t even give me heartburn. Given the fact that enthusiasts have waited for 35 years for the answer of Deckard’s replicant status, machines who look like humans, I think we were owed a few more minutes. Besides, if Harrison Ford signed on for the film, it had to be something special.

Violence/Scary Images: A blade runner’s sole purpose is to retire replicants—permanently. This involves all manners of death: shooting, drowning, stabbing, etc. The movie entails violent ends to some of the machines, including point-blank headshots and fist fights where one or more are beaten bloody. With explosions and gun battles, expect to see a whole lot of blood throughout the movie.

Language/Crude Humor: F*** is used several times in the movie, right up to the limit for an R rating. God’s name is used with d*** once and there are a few other profanities: pr*** and b***tard.

Sexual Content: There is a reason this movie is rated R. Villeneuve took great liberty in using the naked human form. While there is no sex, nudity, both female and male, is used throughout the entire film, with gratuitous topless females holding the majority of the shots.

Spiritual Content: A character quotes the Old Testament to invoke sentiment and also refers to new replicant models as “angels.” Replicants have no soul, but it is all that they strive for, to feel human.

Drug/Alcohol References: The main character K smokes and knocks back a couple of drinks. His boss also is shown drinking. Deckard prefers whiskey, as does his dog.

Positive Content: There is a need for purpose. In the new line of replicants, obedience is their highest quality. This is where their predecessors fell short. However, stir in a glimpse of feeling and emotions—a human soul—and the itch for love and belonging push beyond the obedience to do what is right. K’s loyalty to his companions is something to be admired. 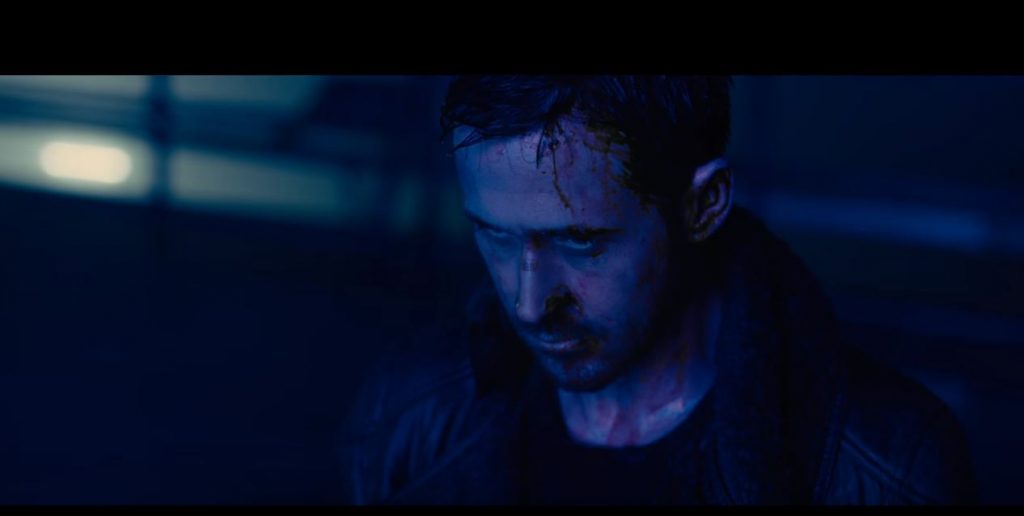 This sequel was a long 35 years in the making. The original Blade Runner, directed by Ridley Scott, still holds a high bar for sci-fi/dystopian films. Though the rumor floated for years, it was finally announced in 2016 that Blade Runner 2049 would finally grace the screens. Coming off of the heels of an original film that relied heavily on stellar acting and physical props versus CGI, I wondered if the writing could wrap a new generation into a dark, gritty Los Angeles of the future, where the line is blurred between humans and replicants, who were made for the sole purpose to serve humans in one capacity or another.

Denis Villeneuve snaps the film into pace with the opening scene. For a race bordering slavery, replicants have rebelled throughout every generation their creation. Villeneuve plucks the viewers’ heartstrings for replicants from the start, then shoves them into a box of order and obedience. The rambling scenery shots are necessary to balance the weight of the plot. It is the “what if” question that causes the main character, K, to stumble, and allows the viewer to latch on bit by bit. K fights his programming, everything that he was created for, to simply solve one question. And the final shot answers his search.

Ryan Gosling plays the lead character, K, a replicant who, ironically, is tasked as a blade runner—exterminating other replicants. He is consistent in obedience to Madam, immaculately played by Robin Wright, with the Los Angeles Police Department. It is not K’s place to ask why a quality Gosling portrays with precision. His evolution, from compliant to questioning, captures K’s character arc perfectly. Harrison Ford’s iconic reprisal of Deckard is taken on without so much as a misstep. Sylvia Hoeks’ replicant Luv was riveting to watch, the yin and yang of the soulless creature longing to fit. Jared Leto’s portrayal of Niander Wallace was confusing, although I’m not sure if it was due to the writing or his acting. It was an interesting juxtaposition to see Wallace versus Tyrell, the blind man versus the thick glasses. Fans of the original film will be thrilled with the cameos. 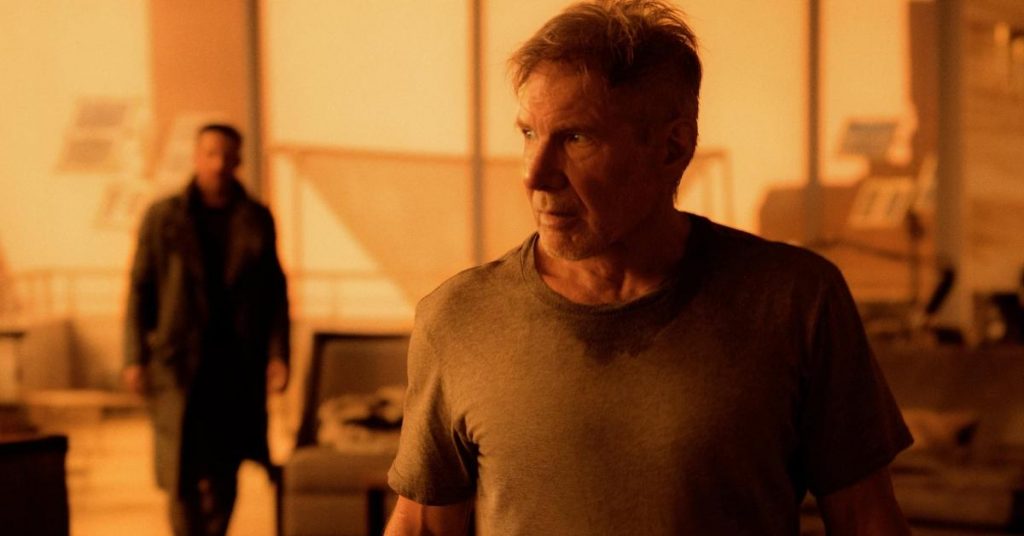 Villeneuve masterfully combined real props with CGI for this film, to lend to the story rather than weaken the plot. He has a keen eye to work in direct shot-for-shots from Blade Runner and a few of them have a new twist. Some stunning CGI work is involved in a particular scene, having superimposed two characters while simultaneously blurring the line. Villeneuve retains the rough, gloomy Los Angeles from the previous film, delving it into further chaos and despair, complete with gigantic, nude holograms offering “Everything you want to see.”

Leave it to Hans Zimmer and Benjamin Wallfisch to sway the viewers into Blade Runner 2049 with their direct homage to the original film, leaving a feeling of both new and recycled. Even though the new scores rely heavily on the previous, distinctive music, fans of the original will appreciate the head nod, while new viewers experience some of sci-fi’s pioneer electronic, story-enhancing music for the first time.

This movie was on my radar for over a year and I expected big things. There were some points where the plot was congested and bogged down by lengthy explanation scenes when it could’ve been shorter and more effective. Villeneuve’s envelope-pushing f-bombs and nudity detracted from the film, and anyone going to the movie should remember that it is firmly rated R. The plot and story overall were well done, all the way to the final scene. No need for the extra language and dangling bits. But in a world where sex is cheap and the future is grim, Blade Runner 2049 pits blind obedience against free will—the ultimate choice for all of us. 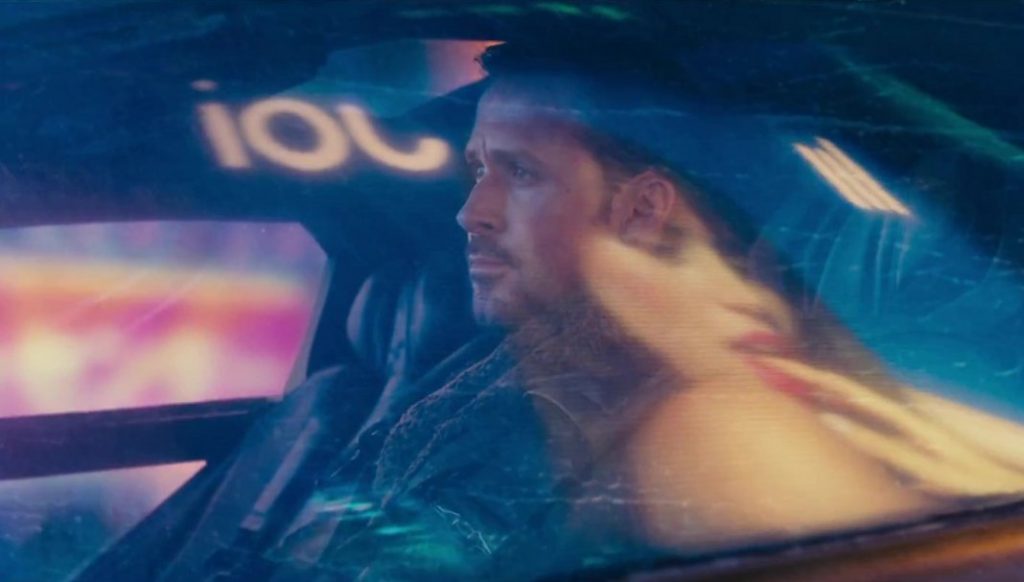 “Blade Runner 2049” pits blind obedience against free will—the ultimate choice for all of us.