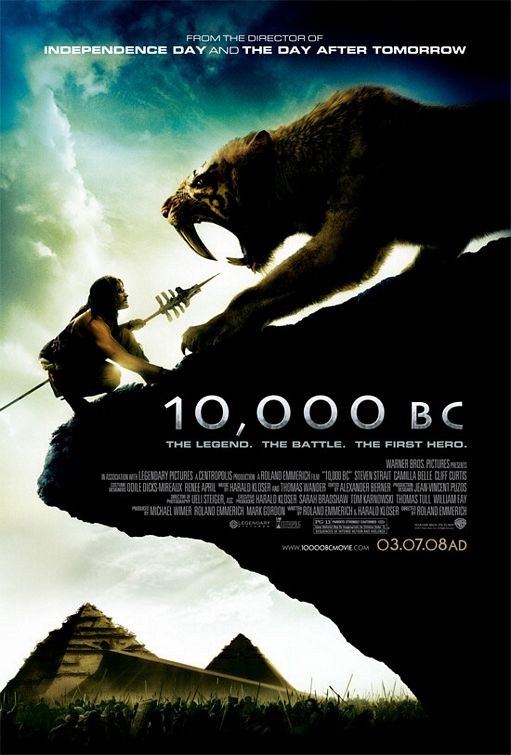 I once saw Roland Emmerich described as “The Michael Bay of the ’90s and early 2000s.” Valuing spectacle over strong storytelling is a strategy that can bring in large audiences if done artfully and in moderation; when done poorly, however, it’s an easy way to churn out duds. 10,000 B.C. showcases the latter side of that coin.

The film follows the journey of a prehistoric tribe’s young hunter to save his lady love from a band of foreign kidnappers, but the story was never the reason for this movie’s existence. It was always about what kind of visual effects such an endeavor could pull off. Here we get to see what emerges when a filmmaker doubles down on a single aspect of his craft and eschews all else. Of course, whenever that happens, the results tend to be…not the most inspiring.

Violence/Scary Images: Many of the characters and cultures are portrayed as savage. People fight and try to kill one another, sometimes drawing blood, and there are several battles with vicious and large wild animals. A mammoth is killed onscreen.

Spiritual Content: There are shamans and magicians who give prophecies and are implied to have mystical powers.

Sexual Content: Clothing is often relatively sparse. There’s some cleavage, and men are shirtless at times. Most of the men’s upper bodies can often be seen even through their clothing.

Other Negative Content: Lots of stereotyping of older cultures.

Positive Content: Some thin themes are present about not giving up on those you love.

I’m not generally a particularly opinionated person. So ordinarily, when I watch a film, it takes me quite a while to decide what I think of it. But every so often I’ll see a movie where I know for absolute certain within the first ten minutes that I will not enjoy it.

Given that director Roland Emmerich is known far more for his penchant for special effects than for his storytelling abilities, the movie’s weak story opening is unsurprising. The intent is clear: get to the cool visuals as quickly as possible. 10,000 B.C. could be used as the poster child for the idea of style over substance. The trouble is, without a story or a world to enhance, that style is stripped of its effectiveness.

The most basic, most often-repeated rule in storytelling is “Show, don’t tell.” To their credit, I guess the creators do “show” to some extent: right from the bland opening sequence, they “show” us that they have no interest in building any sort of well-developed narrative. An unengaging narrator is used at the start as a replacement for an actual establishing scene, allowing us to immediately leap into the movie’s flimsy and poorly paced plot.

The story begins among a tribe of mammoth hunters whose mammoth supply is becoming scarce. The tribe’s resident shaman prophesies that the tribe will soon go on its last hunt, and the hunter who kills the mammoth during this hunt will one day save the tribe–oh, and he would also win the hand of the girl who had just wandered into their midst, for some reason. We get a couple of quick scenes between said girl and the main character so that the narrator can tell us that they’re in love just before the two of them talk about how much they’re in love, and now that that’s over with we can time-skip straight to the prophesied hunting expedition.

This staunch refusal to let anything in the movie develop organically persists throughout its runtime. Everything from the setting to the time period to the characters gets treated as nothing more than an object to play a role in the plot, never allowed to affect the story in unique or meaningful ways. The mammoths could have been replaced by any moderately large mammal. The overall story could have been told in just about any time period without losing a thing. The character designs for the tribesmen are so generic and samey that, other than their randomly diverse ethnicities, it’s difficult to tell most of them apart until someone says their name and points–which is just as well, since they’re given so little in the way of personality that it doesn’t really matter who’s who.

The editing and camerawork are equally underwhelming, and they too serve in the cause of making sure that the story is as bare and undeveloped as possible. The camera angles used during action scenes frequently obscure most of what’s going on and cut between one another in disorienting ways, as though the editors are trying to make sure that we don’t see too much and accidentally start to care about the characters. Combined with the rushed pacing of the plot and skipping over of any potential character growth, it felt like the movie wanted to get itself over with just as much as I did.

For as much as I’ve been ragging on this movie for its technical aspects and basic writing flaws, I could probably get past all of it if only the movie did something interesting. Life before the advent of modern civilization, to which the movie’s very title is meant to bring our attention, has plenty of room for exploring what it might have been like to be a human as humanity itself was still developing. This type of idea is what the title led me to believe would be present, at least in some capacity, in the film.

Instead, we get a series of overly generic clichés and contrivances that honestly come across as nothing more than a vehicle to shuttle us through a sea of special effects. But void of any context to give them relevance, even those effects–while quite well done for a 2008 film–ultimately fall flat.

My recommendation: stay away from this one. There’s nothing here for you.

+ Visual effects are quite good

A boring and underdeveloped film that offers viewers no substance and nothing to invest in.