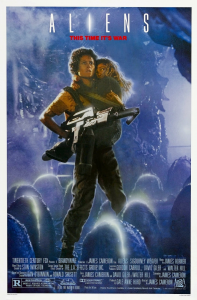 Following the immense success of Ridley Scott’s original Alien (1979) film both in the box office and critically, 20th Century Fox was ready to franchise their newly acquired high concept horror series. As early as that year, the production company Brandywine Productions was conceptualizing a sequel that wouldn’t materialize for seven years that was 1986’s Aliens. The span in time reflects the utter changes that the sequel would undergo.

Instead of a deliberately paced suspense-thriller with a Lovecraftian immortal monster, the concept of the Aliens was retconned slightly into a space-marine action movie. It was basically the embodiment of how it evolved from the stylist and experimental 1970s cinema to the blockbuster-driven, high-concept 1980s films. Replacing Ridley Scott from with James Cameron as director speaks heavily to just what kind of stylistic change this shift ultimately became. His incredible work on Terminator proved he could make ultra-violent R-rated action movies and here he fully delivers.

Language/Crude Humor: Severe and repeated use of heavy language like f*** and s***. 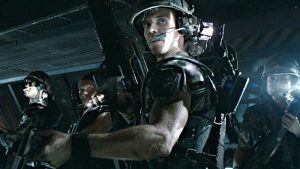 The shift is also reflected in the massive gulf of time between the first and second movie in the story. Thematically the film addresses this up front by this story taking place decades after the first one and explaining that Ellen Ripley was lost in deep space between the events of the first film. This utterly simple setup ends up being put to good use in the premise for the sequel as it turns out the ignorance of Ripley’s disappearance has allowed for a human terraforming colony on LV-426 that unsurprisingly becomes infected by the Xenomorph eggs and gets destroyed. In the director’s cut of the film, we actually get a brief sense of what life on the colony is like. LV-426 is a harsh, mostly unexplored planet that’s slowly approaching liveable status as families and scientists work on its development. All that comes to an abrupt end as the Xenomorphs quickly turn it into a hive and massacre the populace.

Aliens is a lot of things. It’s a satire of the 80s action movie that subverts the masculinity and bravado of similar male-lead franchises at the time. It’s a thematical exploration of motherhood. It’s a spoof on corporate villainy. It’s got a lot of ideas it’s juggling around that expand and build upon some of the themes of the first film while going in a decidedly different direction.

The famous squad of space marines is introduced to the film with a cavalcade of, what we would call today, minor prejudices. Vasquez, the only female marine, is arguably more aggressive and hard headed than the rest of them. They’re dripping in sweat and bravado, they carry the largest guns they can hold and they go into the ship ready to go guns-a-blazing against whatever threat they come across. Almost immediately half of them are wiped out and the rest are left existentially terrified. The message is pretty clear, the Xenomorphs are too much of a threat for mere bravado to take out. Here James Cameron exemplifies the brand of feminism he’s always been famous for in his films. In the end, Ripley is the most clear-eyed and sensible person in the room having experienced their destructive tendencies firsthand. This is her story and she’s the only person who knows what it takes to win. This all works beautifully given James Cameron’s incredible storytelling talents that casually weave the themes into a solid action movie script. 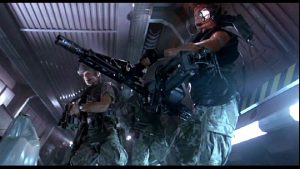 Granted this movie’s status as an action movie in and of itself has been noted as a weakness by some of the film’s critics. In a way, Cameron radically downplays the overt power of the Xenomorphs by giving them reasonable weakness to weapons it wasn’t seemingly vulnerable to in the first film. They may be overpowering in large numbers but a well-placed machine gun turret can halt an enormous hoard of them. I’ve heard some people make the case that this utterly devalues their strength and makes them feel less threatening. It’s also a notably less interesting film thematically than its predecessor. Alien has such a decidedly humanistic vision of humanity’s future and here the vision of the universe feels more artificial, silly, and cartoony. The first film also benefited from being a highly-layered and meticulously detail-oriented experience that’s somewhat lost in the sequel’s more straightforward setup. Gone are the more complex themes of body violation and the Lovecraftian fear of the unknown.

At the same time though I think Aliens’ more casual approach has given it it’s much-earned ubiquity. Much like James Cameron’s other famous sequel Terminator 2: Judgement Day, the fan consensus seems to be that the sequel is a marked improvement from the predecessor. At the same time, a number of critics largely prefer to the initial films in both those franchise as more tightly written, smaller. and darker stories.

The difference seems to be an issue of catharsis. Aliens is an immensely exciting story that builds up its catharsis in a way the first film’s slow deliberate pace doesn’t. The final duel at the end feels immensely earned given how much Ripley has had to struggle with survival by herself against the Xenomorphs and finally gets a chance to take personal revenge against the mother of all Xenomorphs. The movie really understands just how much pain and loss Ripley has gone through and giving her that ending feels so wonderful. Surprisingly for a franchise as dark and horrific as this, it ends up with one of the only genuinely earned happy endings in the entire franchise. Despite having lost everything she loved to the creatures in the first movie (her job, her daughter living on Earth, her friends, etc.) she departs the second movie with a second lease on life. It’s the happiest ending Ripley could possibly earn.

Aliens may not be the unassailable classic like its predecessor but it’s hardly lacking praise. Through its runtime, we’re treated to one of the most exciting high concept thrillers in Hollywood history. It’s the rare combination of incredible talent, brains, and critical distance that allows a new artist to come into a previously established franchise and perfectly explore it through a new lens and create something almost as excellent, if more popular. Whenever fans of the series lament the gradual qualitative decline of the series, it’s films like this that remind us what incredible heights it once attained. 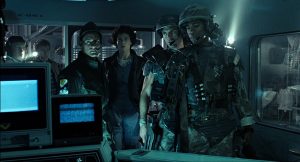 - Somewhat inferior to its predecessor - Makes the xenomorph less powerful

Aliens is one of the greatest blockbuster thrillers of all time. Helmed by the legendary James Cameron at the height of his career, the sequel does the impossible of expanding the scope of the original film while telling an incredibly emotional and exciting story in its own right.