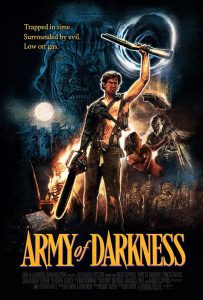 Following the immense success of The Evil Dead (1981) and Evil Dead 2: Dead by Dawn (1987), director Sam Raimi followed up his two major successes with a third film in the trilogy which radically changed the tone and story of his previous movies. Instead of a cabin in the woods horror film, he sent his lead character, Ash, back in time seven centuries where he was forced to fight with medieval knights to stop an attack by the Army of the Dead.

Violence/Scary Images: Some implicit and unseen gore; no blood or excessive gore depicted. Characters are shot, stabbed and set on fire. Some scenes may be unsettling to squeamish viewers.
Language/Crude Humor: F***, s*** and other swear words are used.
Drug/Alcohol References: None.
Sexual Content: Some topless women are depicted for one scene. There is a sex scene in the director’s cut of the film with topless nudity and moaning.
Spiritual Content: None.
Other Negative Content: Uncommented upon/ironic egotism, bravado and selfishness.
Positive Content: Themes of helping others and following instructions. 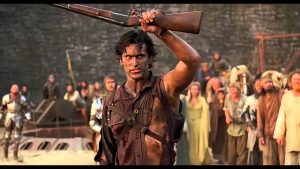 Sam Raimi might be the funnest director in Hollywood. He’s an immensely playful, exciting, and outlandish director who infuses his films with madcap Three Stooges slapstick and excessively energetic cinematography. At the same time, his movies always have a heart to them. There’s always a root of human drama to his best movies that keeps them grounded and weighted. That’s why something like Spider-Man 2 works as well as it does. It’s a swashbuckling superhero film with enormous action scenes, yet its tone jumps constantly depending on the scene and what it’s trying to accomplish. It can borrow from the tone and style of romantic comedies and horror films for individual scenes, just because the movie needs to make a point about the character and their actions, before getting back to normal. Sam Raimi films are at their very best when they’re allowed to be over the top. For that reason, I think Army of Darkness might be my favorite of his horror films.

Army of Darkness is nominally a horror film and a sequel to Raimi’s previous two Evil Dead films. Calling it a horror film is something of a misnomer of sorts. As the final entry in the trilogy, the movie was made to functionally cap the plot of the two preceding films which had a darker yet progressively more comedic tone as they went along. The trilogy, of course, started as a pure horror film with the first movie. Raimi picked the horror genre as a topic because he wanted to make something marketable and inexpensive. Thus a movie about a group of friends facing off against a demonic force in a cabin in the woods served his needs. It was so excessive and cheesy though that the film was famously widely regarded as an unintentional comedy. 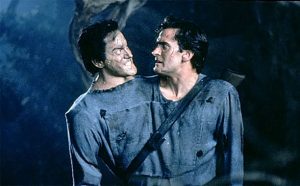 Given that reputation, Raimi leaned into the comedic aspects of the films with both sequels. Evil Dead 2: Dead by Dawn balances comedy and horror in equal measure and jumps back and forth between them from scene to scene. By the time we get to Army of Darkness, Bruce Campbell’s character, Ash, has already faced off against the forces of the Necronomincon twice and prevailed. He’s the last survivor of both groups of individuals, who traveled out into the Michigan woods only to stumble upon the Book of the Dead. Following his second victory against the “deadites”, Ash is surprisingly flung across time and space to 13th century England, where he’s imprisoned by some of the first people ever to do battle with the forces of darkness. There, he strong arms the local lord, Arthur, and begins his personal journey to find his way back to his own time.

Army of Darkness is an immensely silly movie, more so even than Evil Dead 2. There are plenty of dramatic sequences and some flashes of body horror and gore but the movie as a whole never drags it out too long. This is a movie about having fun at the expense of the demons that have berated Ash for this entire trilogy. By this point in the trilogy, Ash is an ironic, 1980s action hero spouting one liners. He’s still nominally a normal, schlubby guy who works as a grocery stork clerk and fears for his life every second of the journey. The moment he flips on the charisma though, Ash becomes an unstoppable machine of destruction. He’s got a double-barreled shotgun in one hand, a chainsaw attached to the other, and attitude to spare. At this point he’s faced the worst demons, ghouls and zombies that Hell can conjure and he’s not going to let them stop him. 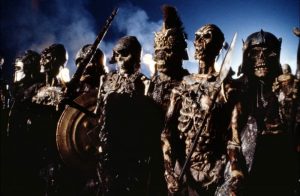 Ash’s only real motivation at the beginning of the story is just to get back to the 20th century. After escaping imprisonment by the humans who captured him, he figures out that all he needs to do is find the Book of the Dead and recite a phrase that will allow him to bring it back to Lord Arthur and the other humans where he can be conjured back to the future. When he unintentionally awakens the Army of the Dead due to his carelessness, he’s forced to consider coming to the aid of the humans who his actions may have unintentionally doomed.

The story is fairly perfunctory. It’s not terribly emotionally gripping and Ash’s “character arc” is fairly disingenuous. He doesn’t become a modest man of the people by the end of the story. He’s more egotistical than ever by the final scene. The whole film is just wallpaper for Bruce Campbell’s personality that gives him the chance to run wild and get caught up in crazy hijinks. Maybe the most emblematic scene in the entire film comes as he’s departing on his journey to find the Book of the Dead. After being chased by a powerful demon into a windmill, he finds himself being attacked by an assortment of tiny Ashes who do everything in their power to mess with him, before one of them manifests into a fully-sized clone of Ash which he immediately blows away. This isn’t a story about facing your demons; it’s a story about Ash being Ash. 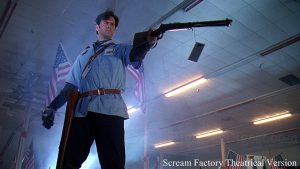 Sam Raimi brings this all to life with his usual brand of swashbuckling action, ironic self satire, and attitude. What doesn’t work for the film’s plot is made up for by a handful of spectacular bits of slapstick, gore, sword fighting, and an epic final siege with dozens of extras and set pieces. It just wants to entertain you and it’s throwing every ounce of its meager budget at the screen to do so. I wouldn’t call this Sam Raimi’s masterpiece, as Spiderman 2 and Evil Dead 2 both technically do a better job balancing the tone and emotional weight required of those stories. Army of Darkness is a mess, but it’s an auteur mess with an unforgettable voice, attitude, and ironic self satisfaction. I definitely revisit this film more frequently than any of the other Evil Dead films.