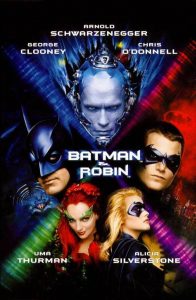 With the tragic passing of director Joel Schumacher on June 22nd, I made it a mission to finally go back and watch his infamous adaption of Batman from the late 1990s. Following the immense success of Tim Burton’s two Batman movies, he had been brought on with Burton and Warner Brothers’ approval to lighten up the Batman franchise and make it more palatable to families. His two movies, Batman Forever and Batman & Robin, were not well received. The latter of which was such a train wreck that it infamously “killed the Batman franchise” for almost a decade until Christoper Nolan’s radical reboot. Schumacher himself apologized to Batman fans for disappointing them with the movie. With twenty three years of critical distance though, how does the movie hold up upon reexamination? 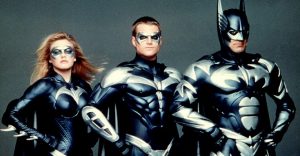 What is there to say at this point about the infamous Batman & Robin? Twenty-three years later, the film is still deeply reviled by fans who consider it the apex of bad superhero moviemaking. It’s a cheap-looking, stagey, campy, and homoerotic rendition of Batman that forgoes the appeal of Tim Burton’s beloved movies. It was so deeply reviled by the public and comic book fans alike that every superhero franchise for a decade, from X-Men to Batman Begins, made efforts to radically distance itself from it in every way.

Alas, the movie has actually had something of a minor renaissance in the past couple of years. Essayists like Patrick H. Willems have gone out of their way to reappraise the film, exhaustively making the case that the movie’s eccentricities play a great deal better following the modern boom of the superhero genre. This has coincided with a recent effort to bring more attention to some of director Joel Schumacher’s other better films, like Falling Down, St. Elmo’s Fire, The Lost Boys, The Client, A Time to Kill, Phone Booth, and Flatliners. 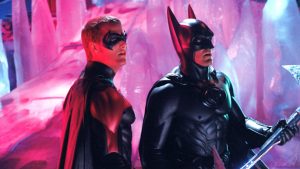 Personally, I wasn’t part of the generation who had been deeply wounded by this film in theaters. I didn’t watch this movie myself upon release in 1997. I was only two years old at the time. I didn’t view it until a binge watching session of Batman movies in summer 2012, and at that time I mostly dismissed the movie as a tedious bore that compounded after watching three better Batman movies prior to seeing it. I never felt the sting of this movie’s infamous backlash, but I never thought much of it beyond considering it a cheap 1990s action movie that doesn’t even scratch the surface of the kind of fun nonsense others in that time period, like Demolition Man and Judge Dredd, managed to achieve. It mostly just struck me as lazy and embarrassing. I was open to the possibility though that I might like the film more upon rewatching it and went in with an open mind and mild anticipation. So how does Batman & Robin play to fresh eyes?

Truthfully, it’s still not great. It’s not as apocalyptically offensive though as some other superhero films we’ve received in the decades since. It’s not as bland as Daredevil or some of the early Thor movies. It’s also not viscerally infuriating like Batman vs. Superman, Green Lantern, X-Men Origins, Fan4stic, Electra, The Amazing Spiderman, or Dark Phoenix. The rose-tinted glasses some recent critics have applied going back and watching it didn’t quite work for me as much as I’d hoped. My criticisms now are the same as when I watched it for the first time eight years ago. It’s lazy, artificial looking, half the actors aren’t even trying, and the energy that the series had started with in 1989 had been depleted by 1997. The movie’s second act is limp and shy of some moments before finally hobbling to the finish line and collapsing. You can tell there’s just not enough here to push a fifth movie had they wanted to try. 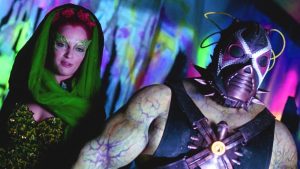 I did however enjoy the experience perversely! The movie does have a groove you can work with and enjoy for the most part. Much as I was able to groove on The Rise of Skywalker in the same vein as a schlock B-movie like Krull or Space Mutiny, I was able to groove on Batman & Robin! Having rewatched Batman Begins and The Dark Knight in the past week, it was intensely fascinating seeing just how different this movie was in comparison to those two much more critically acclaimed and thematically cohesive films.

As anyone who has seen it is aware, the film is a cartoonish story about Batman and his side kick Robin trying to track down three super-villains: Mr. Freeze, Poison Ivy, and Bane. As this is happening, Alfred’s niece arrives at Wayne Manor to spend some time with him as he has discovered he’s dying of a mysterious illness with no known cure. The “drama” of the movie’s central story focuses on the core relationship of Batman and Robin. As we see, they’re a tight and focused team that works immensely well together. With the arrival of Poison Ivy onto the scene though, she starts releasing love pheromones into the air that make both superheroes fall in love with her. Batman quickly realizes this but Robin quickly starts falling head over heels for her and starts resenting Batman for belittling his role in their team. As such, the story ultimately becomes about these characters trying to figure out how they can overcome their petty disagreements to reignite their bromance and save Gotham City from the plight of multiple dangerous super-villains who ultimately decide to team up against them. 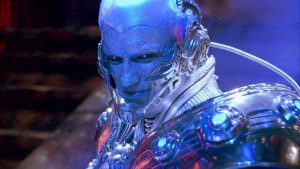 Much like the previous films in this series, the nominal “story” is mostly nonsense. The drama doesn’t work and mostly just fills space. It makes a two-hour long movie feel almost three-hours long and drags the plot between its insane set piece moments. Those are the moments when the movie really shines. Joel Schumacher has stated in interviews that his desire with the film was to make the movie a living, breathing comic book, and he clearly did that within his frame of reference for Batman. It’s inspired stylistically on the comedic silver age comics and drawing tonally from Adam West’s version of Batman. It’s silly and doesn’t have much dramatic consequence to its narrative, but it’s relishing in its absurdity in a way most superhero films don’t. It’s perversely proud of its tone and style.

Even in disarray, you can pretty much parse through the elements of the film one by one and state pretty clearly if they’re working or not. Batman and Robin’s homoerotic rivalry is pretty perfunctory and falls flat. George Clooney REALLY doesn’t put any effort into his performance and phones in a ton of lines, including the film’s infamous opening line, “This is why Superman works alone!” Half the dialog is either irritating, cringeworthy, or falls flat. I was laughing at a lot of it though, albeit maybe not for the reasons the movie is trying to achieve.

The things that do work though are the eccentricities and the campy elements Schumacher was clearly in love with. The villains are all goofy, over-the-top highlights and callbacks to the Adam West version of Batman’s style. They’re all extravagantly evil, villainous, backstabbing and cruel. Poison Ivy plays a genocidal, environmentalist femme fatal with sexual energy that burns off the screen to such a degree that it’s probably not appropriate for children to watch. Arnold Schwarzenegger is stunt cast in the role as Mr. Freeze and gets a handful of the worst one-liners of his career, but he’s probably more in tune with the film than almost any other character. He has the strongest motivations of any character and the handful of moments of pathos he’s given actually feel somewhat touching. 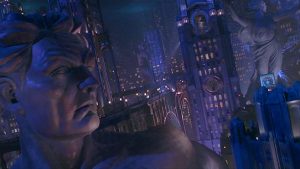 The set design is also bonkers and beautiful to look at. It’s a mesmerizing combination of neon lights, tightly detailed sound stages, and thematically stylized sets that all reflect aspects of the characters. Mr. Freeze’s sets are all ice themed. Poison Ivy’s sets are all tropical/jungle themed. Batman’s cave and mansion are all richly decorated, either poshly furnished or themed around the gothic style of Batman himself. The movie as a whole is a feast for the eyes, even though the cinematography feels a great deal more flat than how Burton used the camera. The movie occasionally indulges too much in cheesy 1990s era CGI that stands out amongst the packed production design, but it does have its charms. The movie, for better or worse, evokes every trend of 1990s studio filmmaking.

Batman & Robin is primarily a stylistic exercise and a deeply compromised one at that. The original Batman movies were always flawed but they mostly survived based on the strengths of their oppressive gothic tone and their impressive performances by huge Hollywood actors. This film is very much the same but its tone is so overtly antithetical to the appeal of the original Tim Burton films that I can understand why people might be viscerally frustrated with it. At the same time though, I can’t help but admire its boldness. Everything about Batman & Robin is intentionally designed to be the way it is. It’s a self-parody of its own franchise that’s trying to get the audience to laugh with it. If nothing else, I find that enjoyable!

Batman & Robin is not a good film but your tolerance for it will depend on what your values going into a Batman movie are. It's an anarchic and silly blockbuster that stands at a distance from the entirety of the Batman franchise as we've seen it before or since. In a world where we have solid batman movies like The Dark Knight, Batman (89), Mask of the Phantasm and LEGO Batman, it's certainly not as offensive now as it was at the time of its release!