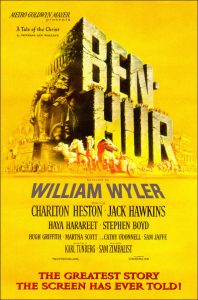 In the Golden Age of Hollywood, religious epics were some of the most successful and beloved films ever produced. Studios poured millions of dollars into realizing massive spectacles and bringing classic stories of the Christian faith to life. At their height with 1959’s rendition of Ben-Hur, the genre was the most popular in Hollywood. With the full weight of Hollywood money and talent behind them, many great filmmakers like William Wyler produced films that are still held dear by religious people after more than sixty years.

Violence/Scary Images: Some carnage; people are trampled in a chariot race by horses, men die in battle, Christ’s crucifixion is shown, lepers are shown with rotting flesh.

Spiritual Content: Characters discuss their religious beliefs throughout the film. Jesus of Nazareth is a character who appears repeatedly at the edge of the story.

In the age of television, Hollywood had to set itself aside as something you couldn’t just see at home. As World War II veterans returned from battle, the economy was flushed with cash which created a period of relatively high wealth for the American middle class. With the advent of television, suddenly Americans could afford to buy a TV set to view broadcast sitcoms and movies in their living room for free, so long as they didn’t mind commercial breaks and a small black and white screen. That put a huge damper on Hollywood since a lot of their money came from cheap, black and white films they spit out in between their major prestige releases.

From the mid-1950s to the mid-1960s, Hollywood figured one solution to catching the eyes of the public was to increase the size of the movies. Spectacle became the name of the game. In the decades before hotels sold themselves with “Color TV” as a five star amenity, Hollywood began experimenting with wide screen technology, technicolor, and even 3D effects to make the films feel more epic and spectacular. Hollywood funded massive multi-million dollar extravaganzas with thousands of extras, enormous sets, cutting edge special effects, and huge actors to draw in the fickle eyes of the public.

It was a short sighted plan. By the time 1963’s Cleopatra was released to an unreceptive audience as one of the largest bombs in box office history, Hollywood had gone broke and was starting to look to the counter culture for fresh blood. Thankfully, cinema was given a number of the greatest epics, big budget musicals and spectacles in the history of film during this time, including Singing in the Rain, The King and I, An American in Paris, Spartacus, The Robe, Land of the Pharaohs, The Bridge on the River Kwai and Lawrence of Arabia.

America, still a predominantly overly Christian mono-culture at the time, held up religious epics as a staple of the genre. Many of the most famous epics of the era specifically drew on religious imagery much in the same way the modern Christian film industry does. There’s always a market to inspire in the faithful and to scorn Godless Hollywood while they’re at it. The Ten Commandments, Samson and Delilah, David and Bathsheba, King of Kings and The Greatest Story Ever Told were all released to varying levels of critical acclaim but were all drawn from the same well. 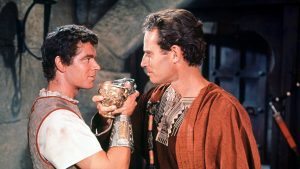 If one stands above them all, it’s William Wyler’s 1959 adaptation of Ben-Hur. His adaptation of the book, Ben-Hur: A Tale of the Christ, wasn’t the first Hollywood adaptation. It was the third of six film adaptations of the original 1880 novel by former Union general Lew Wallace. Given that the book was christened “the most influential Christian book of the nineteenth century” and it’s a best selling novel at that, it’s not surprising it received so many adaptions in the centuries to follow.

The story follows the titular Judah Ben-Hur. As we meet him, he’s a prince living in Roman Palestine in the years before Christ’s ministry. The story doesn’t follow Christ directly, but he does factor into the narrative at several points. Ben-Hur is greeted by a former friend, Messala, who sailed west to Rome years ago and became the commander of an entire Roman garrison. Rome is starting to move more forces into Judea because the Jews are proving to be a rambunctious lot who don’t want to submit to Roman rule. When an accident occurs, wherein Ben-Hur’s love, Esther, accidentally drops a room shingle on another Roman commander, Ben-Hur takes the blame and is wrongly imprisoned as a slave while the rest of his family is also cruelly punished and hidden away. After spending years on a Roman barge as a rower, Ben-Hur earns his freedom by selflessly coming to the aid of a cruel Roman Consul named Quintus Arrius. Having done so, he journeys back to Judea during the height of Christ’s ministry where he plans to save his family and seek revenge on Messala.

At three-and-a-half hours long with an intermission, Ben-Hur is a hefty film with heavy themes and spectacle to spare. It’s a film born both of a deep desire to capture the eyes of its audience and to deliver them a proudly religious story. In both realms, Ben-Hur succeeds. The film was shot on location in Italy with a cast of 10,000 extras. It features scenes of combat, massive special effects scenes, and an impressive chariot race sequence filmed on one of the largest sets in Hollywood history. It was shot on 70mm CinemaScope cameras in widescreen, and captures some of the most beautiful vistas and scenery of any movie of its day. This is a film that wants to draw you in with spectacle and scope the likes of which audiences had never seen.

This is certainly an appropriate approach for a film that addresses the life of Christ, even tangentially. The presence of Christ in the story is easily its most notable story element. What’s important to understand though is that Christ is always at arm’s length throughout the story. You see his birth, his sermon on the mount, and his crucifixion in the story at a distance, but you never see his face or hear his words. He’s referenced numerous times in the narrative as a mysterious man performing miracles but Ben-Hur largely doesn’t acknowledge him as he’s too caught up in his quest.

One of the only interactions Jesus has with Judah Ben-Hur comes early in the film when he’s being dragged to the galleys as a slave. His caravan stops at Nazareth to give water to the Roman soldiers while the slaves are left parched. A severely dehydrated Ben-Hur suddenly finds himself gifted a mouthful of water by a long-haired man who scorns the Roman soldiers with a glance when questioned. Ben-Hur doesn’t know it but he’s had a prayer answered by God. The act of mercy is later reflected by his own kind actions towards Arrius, who Ben-Hur saves despite being treated cruelly by him.

Ben-Hur is the story of how we interact with others regardless of the immediate presence of God. Ben-Hur’s entire motivation in the story is to take vengeance upon Messala, but he considers that an act of divine justice. He’s not willing to forsake his God and commit a cold-blooded murder. He still has to act and interact in the world as a good man despite being wronged and imprisoned. He may very well be caught in a game of cultures, politics, religion, and slavery, but he’s a noble man. His nobility ultimately saves him and grants him the rank and opportunity he needs to seek revenge. 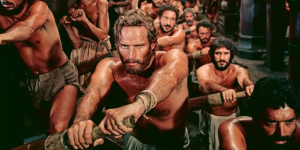 Even so, vengeance is unbiblical and proves fruitless. He ultimately discovers his family suffering in the Valley of the Lepers, where he resigns himself and his life to be with those he loves. He may have earned his vengeance but he’s an unfulfilled man. In the end, redemption is only found at the feet of Christ. Ben-Hur meets Christ one final time at the foot of the cross, where he gives the suffering man a taste of water like Christ gave him before.

For Lew Wallace in his original book, Ben-Hur’s journey was a deeply autobiographical one. He famously made a tactical error during the Battle of Shiloh. It resulted in the first day of one of the bloodiest battles of the American Civil War which only deteriorated further from then on. As author Victor Davis Hanson writes in his book, Ripples of Battle, Judah Ben-Hur’s damaged reputation as a result of an accident reflected Wallace’s own life having begrudged General Grant, who lost thousands of soldiers in battle as a result of Wallace’s mistake. As a deeply religious man, he conceptualized it through a story of redemption and reunion.

Ben-Hur reassures us that Christ is always waiting for us and that forgiveness is always on the other side of the hill. We may suffer. We may turn away from him in anger. Regardless, Christ will always forgive us. He was there in our suffering and he’s there in our redemption. He was here in his life and he’s here following his crucifixion. The world is often difficult to live in because of what it throws at us. We will be wrongly persecuted by others should we decide to live by Christ and reject worldliness. As we see, Messala persecutes Judah Ben-Hur, not because of the accident, but because he turned his back on Rome. Rome persecuted Judea because it wouldn’t conform to Roman rule and abdicate to Rome’s gods. Judea’s rebellion against Rome earned it a horrific and massive occupation by one of the world’s most powerful empires. In the end, all the powers of Rome, sin, and man couldn’t break the power of Christ.

For all its efforts, Ben-Hur was richly rewarded. It won a record-setting eleven Oscars and became the second highest grossing film at the time behind Gone With the Wind. It’s regarded as one of the most beloved religious films of all time and it’s earned its place as part of the Library of Congress’s National Film Registry for being “culturally, historically, or aesthetically significant.” It remains a testament to the power of cinema to draw us in and deliver us transcendental truths.

Ben-Hur is one of the great films of classic Hollywood cinema. Over sixty years later, it remains one of the most spectacular and epic pieces of film ever produced!