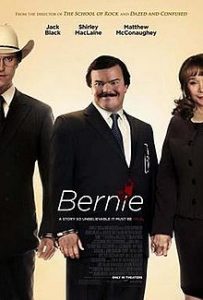 Richard Linklater is one of the most important directors working today. His filmography is lined with masterpieces like Dazed and Confused, Boyhood, School of Rock and the Before trilogy. Of his recent productions, one unassuming film from 2011 stands out as one of the most unusual and fascinating stories he’s ever told.

Violence/Scary Images:  There are a handful of scenes depicting dead bodies; one involves a mortician prepping a funeral, and another is a staged car crash with multiple gruesome, bloody bodies.
Language/Crude Humor: Severe language throughout; f***, d***, h***.
Drug/Alcohol References: Nothing serious.
Sexual Content: Some gossip about sexual activity and sexuality.
Spiritual Content: Most of the characters in the film are strong Christians who partake in a local church community.
Other Negative Content: Themes of murder, homophobia, and moral failure.
Positive Content: Themes of charity, community, and love. 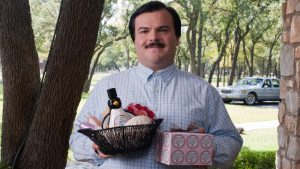 In my recent efforts to catch up on movies while the plague continues to rage outside, I’ve made numerous personal discoveries of films I hadn’t seen before this month. I wouldn’t have expected to adore films like The Gospel According to St. Matthew, High and Low, Magnolia, Pickpocket, The Baker’s Wife, Kundun, Glengarry Glen Ross, Lost Horizon, Million Dollar Baby, The Ballad of Cable Hogue, Last Action Hero and Sunshine (checkout my recent blog series, The Lockdown Journal, where I journaled my thoughts on all of them) but I found myself surprisingly engrossed by the lot of these movies! Many of them are now new favorites! Of the lot, the film that’s most surprised me was one I wasn’t expecting.

Richard Linklatter’s Bernie is almost a movie I feel like I shouldn’t discuss. I watched it with no expectations or even a plot synopsis beyond knowing who the director was and that the film starred Jack Black. I wouldn’t have guessed going into the film that I was stepping into one of the most empathetic character studies I’ve seen in the past decade. Combine that with a startling crime thriller, a deeply earnest depiction of rural American life, and an exploration of the power of Christian philanthropy and the film blossoms into something completely unique and unforgettable.

If you haven’t seen it yet and wish to go in blind, I would recommend renting the film and then coming back to read this review later. From this point forward, I’m going to explain the broad strokes of the story and why it fascinated me so much. 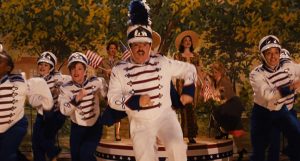 The titular Bernie is based off of a real life man. Born and raised in the town of Carthage, Texas, Bernhardt “Bernie” Tiede was a funeral director and parishioner who fully dedicated his life to his small town, developing one of  the most pristine and loving reputations of anyone alive. His life was changed forever by a series of events that escalated in 1996 which fundamentally destroyed his life and reputation, permanently changing his relationship to the town around him. By the time we’re introduced to the adult Bernie at the start of the film, he has grown into one of the seminal members of the community. By day, he works as a mortician, but by evenings and weekends he’s a dedicated member of the local church, a philanthropist, and a volunteer working with kids in numerous groups and charities to enrich the community.

The film isn’t playing coy about Bernie as a person. This isn’t a film that’s going to rip the carpet out from under you about his dark side (although we do find out he’s a deeply closeted homosexual). The movie itself believes Bernie is everything he presents himself to be. We know this because when opportunities open up for him to be misleading, selfish, and greedy, he doesn’t take them. When he finds himself with a sudden inheritance worth millions of dollars, he immediately starts pouring all of his money into the community and continues to live in his small house and drive is rusty old car. Bernie is every bit the charitable and honest man behind closed doors as he is in front of them. 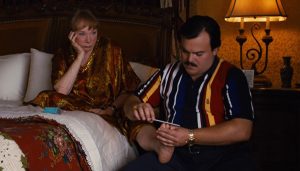 How he got the money is a different story. As we come to see, Bernie does something very out of character following an extended period of time in which he’s forced to associate with one of the least desirable and tolerable people in town. As she enters the story, Majorie Nugent is the town crank. She’s the richest person in Carthage but her disposition has completely alienated her from the rest of the community. Bernie quickly falls under her influence, as his gift for uncompromising charity and love extends to people whom society as a whole have rejected.

Because Bernie is such a giving person, he quickly falls under her heel and finds himself guilt-tripped into an abusive relationship, where he’s forced to handle all of her chores, errands, and abusive language for years of his life. Upon being degraded one too many times for refusing to shoot and kill an armadillo in her back yard, he picks up her armadillo rifle one day and  shoots her in the back in a crime of passion. As we see in the film, he immediately regrets the action and prays to God for forgiveness for such a horrific lapse in judgement. 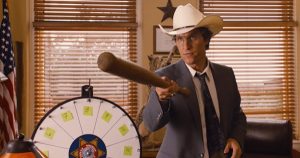 This is the moment that comes to define Bernie’s life and his relationships with everyone he cares about. For a long time the town doesn’t notice Marjorie is even gone, but Bernie’s charity increases exponentially. Eventually, the police discover her body frozen in a refrigerator on her property. Bernie is arrested and all the charitable gifts he gave in the time since her death are seized by the government as evidence.

His hometown is in complete in disbelief that Bernie could even commit such a crime. As we see in the film, Bernie is ultimately taken to another part of Texas where he can be given a trial with an impartial jury, because everybody in his hometown holds a bias due to his good nature and generosity. The interplay between Bernie and the local residents are ultimately part of what makes the film so interesting. This story explores some dark events but it finds a way to show us the best of who these characters are before the bandaids are ripped off. You never get the sense these people have anything but endless love for one another or Bernie. Despite being a deeply religious town, nobody cares deeply that he was gay beyond the value of it being delicious small town gossip. They only see the man who gave his entire life and fortune to building his community. 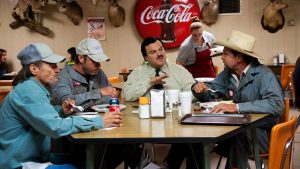 Bernie is a strange sort of biopic. It’s entirely a work of deep sympathy for everyone involved. The story almost bizarrely loves every one of its characters beyond the point of rationality. It manages to create a space where you can simultaneously understand why Bernie would commit the crime he did while also being sympathetic to the woman who was murdered, sympathetic for Bernie’s regret, and sympathetic for the town around him who can’t believe what he committed. You feel sorrow for the people that lost their property because of Bernie’s actions, and sorrow at the town for losing its most prolific member.

It is, at once, a story of one man’s fall from grace and a story about the value of human cooperation, community, and love.

In a filmography as grand as Richard Linklater's, it can be hard to describe one individual film as a masterpiece. That said, Bernie is one of the best films he's ever directed. It's a strange, emotional and wonderful story that manages to take its characters to dark places and convince you they're still loving people deserving of compassion and forgiveness.