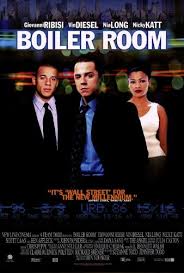 Initially conceived after director Ben Younger had a job interview at a real-life brokerage, Boiler Room draws a hefty amount of inspiration from previous financial crime dramas such as 1992’s Glengarry Glen Ross. It pulls off its homages well but goes so far as to juxtapose itself against these older films, which may account for the fact that it has faded somewhat from public memory.

Violence/Scary Images: The main group of young stockbrokers often get into brawls at the bars they visit. A couple of occasions see the brokers punching or roughly shoving one another while at work.

Language/Crude Humor: F-word is thrown around a lot, along with g*d**n, s**t, and a smattering of most other profanities.

Drug/Alcohol Content: Characters routinely go to bars and parties and drink beer and/or champagne, sometimes clearly to the point of intoxication.

Spiritual Content: There’s a snidely dismissive reference to 1 Timothy 6:10: “The love of money is the root of all evil.” (The verse, however, is quoted incorrectly.)

Sexual Content: Two characters are romantically involved with one another and occasionally kiss. One scene shows them waking up in bed together in the morning.

Other Negative Content: Nearly all of the characters glorify the pursuit of money above all else. Seth runs an illegal casino out of his apartment. He also continues selling to “clients” after learning that his firm is really just a huge scam. The firm has an extremely misogynistic attitude.

Positive Content: There’s a theme about the emptiness of acquiring wealth for its own sake, as most of the people at the firm don’t have a clue what to do with the money they earn. Seth and his family are willing to make sacrifices for one another. 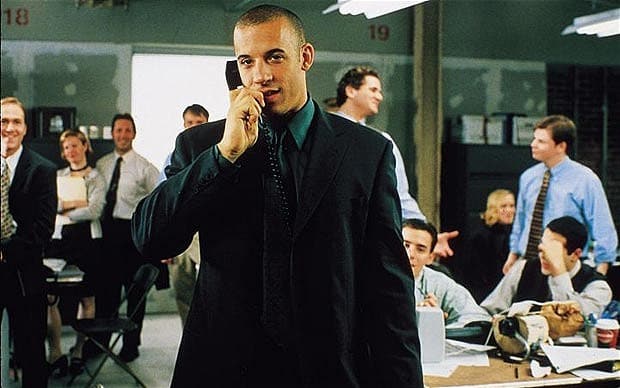 After running a successful casino out of his New York apartment, college dropout Seth is offered a job with a little-known brokerage firm. Pressured by his father to fall back in line with the law, Seth accepts the offer. Soon he’s drawn into a broken world of money, power, and greed as he realizes that his new employer may not be the respectable, law-abiding firm he thought it was.

If you go back through time and look at just about any review of Ben Younger’s 2000 drama, you’ll find it directly compared to one or both of 1987’s Wall Street and 1992’s Glengarry Glen Ross. To its credit, Younger’s film does a good enough job emulating some of their strengths to be reminiscent of these inspirations in style and substance rather than merely through its direct homages. The fact that Boiler Room does directly reference both these movies also makes it harder to avoid the comparison. But here in Retro Review Land, we like to look at how well movies age rather than just how fast they come out of the gate–and, well, the memory of Boiler Room is still intrinsically tied to its similarities to its predecessors.

There’s obviously no shame in being less memorable than another movie, especially a genre juggernaut. But Boiler Room makes the mistake of trying to stand on the shoulders of giants while instead standing in their shadow. It masters the brisk, high-energy pacing and slick characterization that it’s inspired by, but then, like its characters, it sells its own soul in the hustle.

The initial draw of Boiler Room and its predecessors is the fantasy of fighting your way to the top and thriving there in the fast, tough, do-or-die worlds they present. Their longevity, on the other hand, comes from how they break down that fantasy. In Glengarry, for instance, the pressure of their business driving even successful salesmen to a state of grim desperation. Younger builds this fantasy beautifully, with an interesting if not particularly likable protagonist plunging into a world of wealth that he doesn’t belong in. Even if–perhaps especially if–we vehemently disagree with the values the characters preach to one another, it’s fascinating to watch as Seth masters his newfound “craft” and beings his rapid climb up the social and economic ladder.

There’s a point where the movie takes a turn, though. What starts off as a crisp and tight narrative unravels into a mess of moralizing, forced tropes, and confusing exposition. Rather than letting its characters devolve naturally through their own misguided choices and face the consequences of those choices, Boiler Room either keeps its characters static or has them make the “right choice.” What’s particularly frustrating is that despite its convoluted plot devices, the film sets up wonderfully for a more organic–and darker–ending, only to swiftly strike it down in favor of a clean conclusion in which nobody really suffers. Somewhere among the successful negotiations and resolved family tension, the heart of the movie is lost.

Much of what makes parts of the film successful has to be credited to the actors, who do a fantastic job generating the snappy pace and atmosphere that the film relies on. While some of the performances do have weaker moments, the cast as a whole is convincing and compelling enough to make everything feel smooth and natural despite the inexplicably all hip-hop soundtrack.

Judged on its own merits, Boiler Room isn’t really a bad movie. It’s entertaining and occasionally witty and insightful. Its legacy is dominated by comparisons to others in its niche, and here the film’s unique aspects do more to make it forgettable than they do to make it stand out. It introduces familiar ideas in a familiar style but then handles it in an oddly sanitary way amidst its decidedly less sanitary content. Younger and his cast certainly talk a good talk, and if you’re just looking for another financial drama, you’ll want to check this one out. But convincing me that the movie brings freshness to its genre is going to be a pretty tough sell.

-Convoluted plot devices make it hard to follow exactly what's going on -Overly neat ending -Characters all have extremely negative/immoral worldviews, even if the movie does try to discredit them

A fun movie with interesting characters and fantastic pacing through the first half, but with its poorly explained plot twists and artificial conclusion, it fails to escape the shadow of its predecessors.