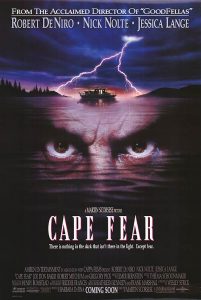 Not every film in Martin Scorsese’s filmography is perfect. Some are uneven, some are weird, some are noble misfires, and some are barely holding together at the seams at times. These movies often serve to contrast the bold heights of his immense repetoir. That said, coming from a great director, even some of his second rate works are notable, culturally significant, enthralling, and brimming with something to say.

Sexual Content: Several scenes of characters discussing rape, a character is implied to be raped offscreen.

Other Negative Content: Themes of sexual violence, injustice, and vengeance.

Any film that follows up a masterpiece is always going to look small in comparison to its predecessor, especially when it’s Goodfellas. Cape Fear was Scorsese’s immediate follow up in 1991, just a year after his career defining masterpiece. A small scale horror/thriller hardly compares in scale or stakes to a crime epic. As such, it feels quite small and impersonal in the company of its brother but on its own terms it’s notable and interesting.

The story is one that’s been widely embraced by culture. I’d long since been aware of this ever since the first time I watched the famous The Simpsons episodes based on the movie. The Season 5 episode also titled “Cape Fear” was a fairly blatant homage. If it’s big enough to get a Simpsons parody you know it meant something to culture. 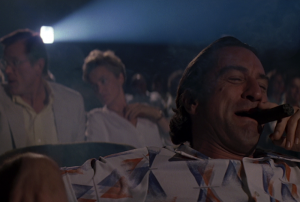 Cape Fear isn’t a totally original vision for Scorsese. This was actually a remake of a 1962 crime thriller of the same name starring Robert Mitchum and Gregory Peck. Scorsese had been on record as describing it as one of his favorite classic films. Originally the project was going to be adapted by Steven Spielberg but it eventually wound up in Scorsese’s hands after the previous director decided the film was too violent.

Despite not having written the script himself, the film is trademark Scorsese. Once again, Robert De Niro stars in the leading role. As always, he’s the most committed person on the set. De Niro went as far as to have his teeth filed down to better get into the role of the disgusting former convict-turned-stalker, Max Cady. The performance calls for him to go nuts for much of his screen time as a vengeful southern hick with a vendetta and at times the role crosses the line into outright camp. When firing at full steam, De Niro is a villain for the ages.

Much like its predecessor, the movie follows a very simple story. A lawyer finds himself being stalked by a former convict that he personally saw to getting thrown in prison for fourteen years. That lawyer, Sam Bowdan (Nic Nolte), was Cady’s defense lawyer and he had evidence that could’ve potentially gotten the case thrown out of court. Upon seeing just how violent and destructive Cady was, he allowed him to be convicted without a proper defense. Now following Cady’s sentence, he’s a free man walking the streets of Sam’s town seeking to deliver violent vengeance upon the lawyer who betrayed him. 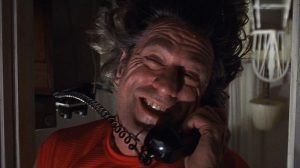 There’s a famous quote from Thomas Moore in the movie A Man for All Seasons that I’m reminded of by Robert De Niro in this film.

“…And when the last law was down, and the Devil turned around on you–where would you hide, Roper, the laws all being flat? This country’s planted thick with laws from coast to coast–man’s laws, not God’s–and if you cut them down… d’you really think you could stand upright in the winds that would blow then? Yes, I’d give the Devil benefit of law, for my own safety’s sake.”

In the universe of Cape Fear, Max Cady is the representation of the devil. He’s a bad man without a doubt being a violent rapist and murderer but he was still wronged by his defender nonetheless. The movie presents him as something of a supernatural force. He starts as a relatively normal human stalking Bowden and his family before escalating their confrontations and the threat against them. He’s even capable of acts of superhuman strength and endurance fueled by his lust for vengeance. Scorsese is seemingly borrowing heavily from other invulnerable stalker blockbusters of its time like Terminator and Halloween but in Cape Fear the themes are slightly more high-minded and moralistic.

Cape Fear is a very fascinating extension of Scorsese’s moral philosophy and explores the ideas of evil begetting evil. If there’s a basic moral lesson it’s that two wrongs don’t make a right. Cady probably would’ve been a force for further destruction if he had been let off his sentence sentence years prior but the law exists to protect everyone regardless of who they are. Sometimes that means that bad people slip through the cracks but that’s the cost of a system that protects the accused. Bowden’s decision to bend the rules just this once ends up being a force for unleashing a near literal hell upon him and his family.

In the famous final set piece on the water, Cady famously starts rattling off references to Dante’s Inferno, declaring that the lowest circle of hell is for traitors. Given his deformity, depravity, and the lengths that everyone has gone through, it’s easy to recognize this as the apotheosis of the movie’s morality. Bowden sinned in the name of order and as a result of breaching the rules, he’s created a chaos greater than merely allowing Cady to go free. It’s a powerful expression of Sam’s descent into hell as  in penance he’s forced to watch as the product of his sins threatens the people he loves.

Like I said before, compared to Goodfellas this movie comes off as shallow. The experience of watching the two in proximity almost gives it the quality of a campy grindhouse film. The characters escalate through their performances to the point that at times it’s almost absurd how insane things get. It is, however, very different with different goals. Alongside Shutter Island, this is one of the few horror films that Scorsese has ever attempted. It’s not perfect but its heights and moments of tension and dread make it a Scorses fan must-see.

Cape Fear is a mandatory viewing for any fan of Martin Scorsese and Robert De Niro. Beyond just being a solid horror/thriller film, it's another excellent chapter in Scorsese's filmography and an interesting exploration of guilt and vengeance.