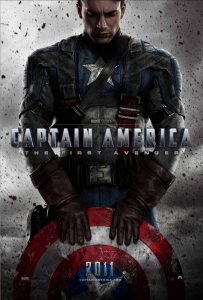 A new army recruit during WWII is infused with a serum to turn him into a super soldier. Soon after, he finds himself battling the Nazi weapons division Hydra and its leader, Red Skull.

Violence: Lots of fighting. Fist fights, guns, tanks, and other explosives are all featured. Several characters are disintegrated.

Language: H*ll is used frequently, alongside several uses of a** and a couple of uses of s**t.

Drug/Alcohol Content: The impetus for the entire story is a serum that drastically enhances physical capabilities. Characters are seen drinking rum or beer several times.

Sexual Content: There are a couple of shots of long kisses. Romantic tension grows between two characters. There are several scenes with shirtless males.

Other Negative Content: Glorification of violence, somewhat justified in that it takes place among soldiers in the propaganda-heavy WWII era.

Positive Content: Steve never wavers from his principles of courage, doing what’s right, and defending whomever he can. The brotherly relationship between Steve and his closest friend, Bucky, is done very well. 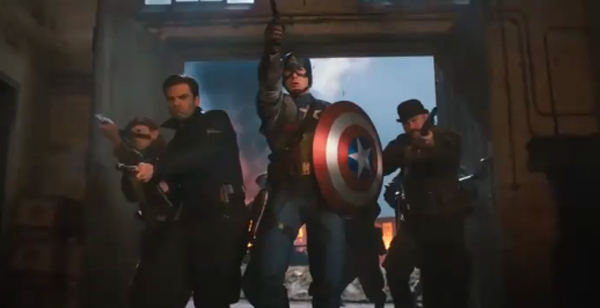 It’s odd to look back on a time when superhero films had not quite yet saturated the movie market to the extent that they have today. Through the lens of nine years of hindsight, Captain America: The First Avenger seems almost like a different movie than it did when it first came out. Overall, we could say that it follows a fairly generic comic book script: a person gets powers, discovers evil, and battles that evil. There isn’t a great deal of nuance, and subplots remain largely muted in service to the main conflict. When laid next to the MCUs entire eleven-year lineup of twenty-two films, it feels almost too simple.

Don’t get me wrong, I don’t need or want all of my movie characters to be morally grey antihero types. In fact, with so many unscrupulous, hardened, or otherwise ethically conflicted superheroes running around on our screens these days, the simplicity of Captain America in both its plot and its principles has evolved to be refreshing rather than stale.

The story starts by following Steve Rogers (Chris Evans), a weak teenager deemed unfit for the military and who refuses to know when to back down from a fight. A couple of beatings later, along with a fifth attempt to fudge his information to enlist in the army, and he catches the attention of scientist Abraham Erskine (Stanley Tucci), who recruits him into a strategic reserve group as a candidate to receive a strength-enhancing serum. After displaying acts of selfless courage, Steve is selected by Erskine to be infused with the serum, and the procedure turns him into America’s first–and only–super soldier.

I admire the construct of having Captain America so poignantly earn his powers. Unlike the other heroes of earlier Marvel films, he does not gain his abilities through birth, wealth, or any sort of mistake. It’s a crucial aspect of the character, especially in how he engages with other characters in later films, and the first movie does an excellent job of distinguishing him in this way.

Sometime after the procedure, Steve learns that a group of soldiers, including his best friend Bucky (Sebastian Stan), have been captured by the Nazi army. Against the wishes of his superiors, he sets out on a one-man mission to save his friend and bring home the captured troops, a decision that brings him face-to-face with the Nazi weapons division known as Hydra and its leader, Red Skull (Hugo Weaving).

As I mentioned above, the plot consists of a simple black-and-white, good-versus-evil style conflict. While it admittedly makes for a predictable story, it also creates an ideal backdrop to showcase Steve’s unwavering values: courage, standing up for others, integrity, and loyalty, to name a few. There’s nothing to muddy the waters as he marches, armed with these virtues, to clash with his enemies, and he becomes a stronger, deeper character because of it. He’s the epitome of the hero we want to cheer for, rather than the hero we think we probably should cheer for or the hero of whose motives we’re not quite sure.

Aside from the character himself, probably the best thing about the film is its action sequences. The currently ubiquitous quick cuts and shaky cam are abandoned in favor of crisp wide-angle shots, allowing us to clearly see everything that’s going on during each fight. Clarity of action is something often lost on modern movies due to issues such as choreography or having to cut together different takes, but Captain America pulls it off cleanly, and this success makes for an incredibly enjoyable viewing experience.

Captain America has always been meant to be starkly distinct from his Marvel contemporaries in both mannerisms and ideals, and Captain America: The First Avenger works wonderfully as both a standalone film and as a setup for the later years of the franchise. While it features a somewhat predictable and arguably generic storyline, the charm of that comic-style simplicity will likely cement it as a classic of the early Marvel years.

While Captain America: The First Avenger is about as formulaic a superhero movie as they come, in hindsight it was an important setup for the dynamics we would later see in the Marvel universe. On its own, it's simply a solid film; in the context of its franchise, it's a cornerstone whose relevance has lasted nearly a decade.