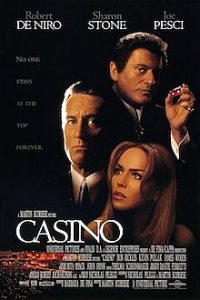 Following the immense critical success of their 1990 Oscar-winning crime epic Goodfellas, Martin Scorsese, screenwriter Nicholas Pileggi, and several actors including De Niro and Pesci, teamed up again five years later for another crime epic. This time the story would move from the east coast mafia to the glamour of Las Vegas during its time of mob rule. Though it wouldn’t quite attain the heights of its predecessor, Casino would become a well regarded and deeply engaging crime epic within its own right.

Violence/Scary Images: Extreme content. Large amounts of blood and violence; characters are shot, beaten, crushed, and tortured.
Language/Crude Humor: Extreme profanity; hundreds of uses of f*** as well as most other swear words and several racial slurs.
Drug/Alcohol References: Characters frequently drink, smoke, and use cocaine.
Sexual Content: Some female frontal nudity and a few sex scenes.
Spiritual Content: Most of the characters are implicilty Catholic or send their children to religious schools.
Other Negative Content: Graphic depictions of violence, greed, sexuality, and all manner of sin.
Positive Content: Themes of the cost of sin, greed, lust, and evil. 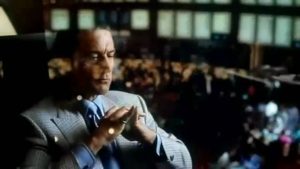 Casino starts as it means to go on with an opening scene of the film’s central character, Sam Rothstein, walking out to his car and becoming consumed in an explosion caused by a car bomb. From there, the film’s opening title crawl begins wherein we are treated to a collage of the glitz, glamor, and beautiful lights of Las Vegas. It then transitions as we see the body of our main character falling down into the flame of his explosion. The lights of Las Vegas are a mere cover for the Hell that its characters are going to descend into.

Many of Martin Scorsese’s best films can be summarized with a single word. Raging Bull is about rage. Taxi Driver is about isolation. Cape Fear is about guilt. The Irishmen is about regret. Silence is about faith. With his 1995 follow up to Goodfellas, the theme to Casino could easily be summarized as “greed”. That wouldn’t be terribly surprising though. Las Vegas isn’t a city that is known for its moral certitude and honor. The city we’re introduced to in this film is even worse than the city exists today.

Our main character, Sam Rothstein (Robert De Niro), is a member of the Chicago mob during the 1970s and a natural gambler with a proficiency in high stakes gambling. When the mob sees talent in him, he’s shipped off to Las Vegas to run the เสือมังกร Casino on behalf of a mob scam. The free bonuses and bets offered by case de pariuri online at registration are the most convenient way to build a bankroll and try different betting platforms or experiment with different betting systems and strategies. As it turns out, it’s actually quite easy to simply take over a casino in Las Vegas. So long as you apply to the state, constantly change your job title, and keep your name out of the news, you can apply indefinitely for a license and the state will allow you to operate a casino while your license is being approved behind a decade long backlog.

Sam’s job is simple. He needs to run the casino so that the mob can launder money and funnel it to the heads of several families back east. The process of running a Vegas casino is strenuous, but Sam takes immense pride in micromanaging his casino and making it the most glamorous and appealing place he can manage. He’s also gamed the system so effectively that it’s effectively impossible to play the casino and walk away with a huge win. Cheaters are taken to a back room where their fingers are broken, and people who win just a bit too much are gamed in such a way that they’re led on and ultimately lose everything.

At the end of the day, the more greedy you are walking into the Tangiers Casino, the more money you’re going to lose. The building is a money making machine and the casino always wins.

Sam starts taking so much pride in the job that he begins firing people in his casino with ties to the state of Nevada and starts getting negative attention drawn his way. At the same time, the Chicago outfit sends his friend and fellow mobster Nicky Santoro (Joe Pesci) to Vegas, where he begins a profitable heist enterprise and starts drawing a lot of heat towards Sam and mob’s entire getup in Vegas. To make matters worse, Sam’s marriage with a former prostitute named Ginger (Sharon Stone) hits the rocks as she’s continually tempted to fall back into the influence of her former pimp who tries to extort Sam for millions of dollars. 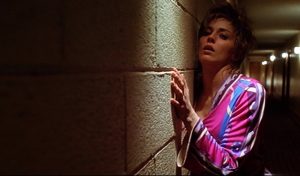 The heat of these confluent events starts accumulating and the mob’s presence in Vegas starts drawing the eyes of the FBI as they get more greedy and more risky with their lives. By the film’s end, their lives of glamor and power collapse under the weight of their greed and sin. Much like its Oscar-winning older brother Goodfellas, Casino is taking a very moralistic attitude about the nature of organized crime and mortal sin. The movie is depicting the honest appeal of why powerful and intelligent people are drawn into such dangerous work and shows the audience how these events unravel one step at a time.

It shows you these low-life people and asks you to empathize with them before it makes you watch them massacre their way through dozens of people, brutally beat people to a pulp and ultimately destroy themselves. That these characters are doomed is explicitly stated in the film’s first scene. They’re not going to live long prosperous lives. The movie is merely a countdown to watching their actions blow up in their faces.

Casino isn’t a film that plays coy about the nature of sin and greed. It makes you stare into the face of brutality and sociopathy at the heart of these characters. At times it feels like a bit of an effort to make the Goodfellas lightning strike twice given that it’s comprised of nearly the same creative team and many of the same actors. That said, it works very well. The movie is based loosely on real events (the names are changed and some of the characters are made more empathetic than their real life counterparts) and the gravity of that reveals just how scummy and manipulative the infamous city of sin truly is. Just as with all sin, you think you’re benefitting from it in the moment, but you don’t realize how much of a mistake you’re making until it’s too late.

+ Amazing script
+ Brisk pacing
+ Great performances by all of its cast

- Long runtime and brutal content may turn off some viewers

Casino is yet another notch in Scorsese's long filmography of great crime epics and moral dramas! It's a long-winded yet thoroughly engaging film that guides its viewer from start to finish!