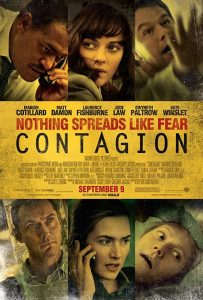 As the world economy continues to tremble in response to the spreading of COVID-19 (aka Coronavirus, SARS-CoV-2), people are looking for answers. Multiple nations have been placed in a state of National Emergency and basic services are temporarily shutting down in an attempt to contain the spread of the virus. As people struggle to understand what will happen next, many are turning to movies to help them get a sense of the world around them. Amusingly, Steven Soderbergh’s 2011 thriller, Contagion, has become one of the highest viewed films on video-on-demand services like Amazon Prime and iTunes since the beginning of the year.

Violence/Scary Images: Characters suffer and die from flu like symptoms. Dead bodies are shown; one dead body is scalped with a bone-saw for an autopsy
Language/Crude Humor: Some significant language including f*** and s***.
Drug/Alcohol References: Characters drink casually.
Sexual Content: A woman discusses having an extra-martial affair.
Spiritual Content: None.
Other Negative Content: Themes of nepotism, corruption and imperfection.
Positive Content: Themes of procedure, human flourishing and health. 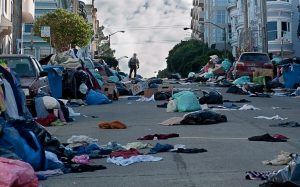 I have immense respect for Steven Soderbergh as a filmmaker. I’m a late comer to his particular brand of cinephilia but as I’m growing older and stodgier, I like his classical sensibility more and more. In an age when so much of Hollywood is driven by bombast and spectacle, Soderbergh is a director who has his eyes planted squarely on classical storytelling, drama, wit, and artistic experimentation. He can make fun crowd pleasing movies like The Oceans Trilogy, Logan Lucky, Haywire and Unsane. He can also make weird, experimental, and often extremely sexual art films like The Girlfriend Experience, Magic Mike and Sex, Lies and Videotape. I generally prefer the former although I respect Soderbergh’s consistent desire to experiment with different filmmaking styles.

That doesn’t always mean his films work though. He remade Solaris that one time to surprising effect, which in the realm of TIMELESS MOVIES THAT SHOULD NEVER BE REMADE is pretty high up there. Also he made Traffic, my least favorite movie in the Criterion Collection. His filmography is littered with a handful of genuinely mediocre and bad films. He’s certainly had more than his fair share of clunkers but he’s driven in a way that most directors simply aren’t. Even when he makes a film with as much inside-baseball terminology as High Flying Bird or as poorly received as The Laundromat, you can see his voice and his intentions at work. His lessor films aren’t on the docket today though. Instead, I want to talk now about one of Soderbergh’s strongest films. 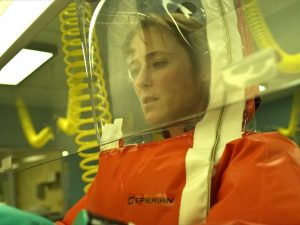 Back in 2011, he set his sights on the sparse but effective pandemic genre with his mid-budget thriller, Contagion. While he didn’t write the film, he was central in its core conception. He wanted to direct a pandemic film and explore what it would look like if the events were depicted as accurately as possible. Of late, the film’s realism and weight has given it a bit more attention than usual. It’s not hard to see why. Spring 2020 is the season of the Coronavirus. As department stores across the world are emptied of suspicious quantities of toilet paper and ramen noodles, people are wanting some visualization of just what to expect out of a pandemic-level virus. Thankfully, Contagion is rather exaggerated by the standards of what we’re having to deal with now.

The thing that most denotes Soderbergh’s best films is how smart they are. Contagion isn’t the most exciting film in the world but it’s an immaculately laid out story that walks its audience through the entire process of how a pandemic starts, is spread, and how it’s investigated by the government and ultimately curbed. It does this by exploring the story through the perspectives of multiple individuals at different levels of the disease. Most of the characters we meet in the story are scientists and public officials working for the Center for Disease Control (CDC). Their job is to evaluate problems logically and to create a viable solution that can be deployed on an international level. Naturally this creates logistical issues and conflicts of interest. Nepotism is a major theme in the film, walking a fine line between making the case that government employees are imperfect people and the fact that they have a responsibility to the public. Much of the film focusses on questions of not only how to cure the virus but how to fairly dispense information and treatment to the public. Occasionally the characters make the wrong decision. Even so, society can continue without the work they’re doing. 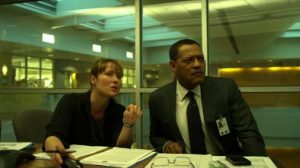 The movie has a lot of balls in the air at any given point and offers up multiple mysteries for its cast to solve. One of the first ones they tackle is determining its origin following their uncovering of the patient-zero. The full truth of that is only revealed in the film’s final moments and only to the audience. The scientists quickly surmise that the virus has an insanely high reproduction rate, with a mortality rate of nearly 30% (by comparison, Coronavirus has a roughly 2-5% mortality rate). The pandemic, as we see it, is ultimately so massive that it completely grinds every nation on the planet to a halt.

Buzzing around the edges of the story, we see how the disease affects other levels of society. We follow the husband of patient-zero and his daughter as they’re trapped in quarantine. We follow World Health Organization bureaucrats as they fly around the world, exploring how poorer countries are being ravaged by the pandemic. We get to meet a Rear Admiral (Bryan Cranston) who stands in for the perspective of the United States government and its role in the crisis. These perspectives are important as they give us a great sense of how society as a whole is handling the process of disease avoidance, panic, breakdown and eventual resolution. 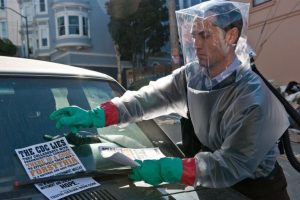 The film’s largest digression follows an internet conspiracy theorist named Alan Krumwiede, who we find stalking the situation. He’s determined to circumvent the government, call them out for their hypocrisies, uncover a government coverup which may or may not exist, and sell vitamin supplements to the public which he claims are plentiful and more effective than a vaccine (this movie is not subtle). Granted, his role in the film is still nuanced. We do find out that the CDC has elements of corruption and nepotism in it and the story is quite vague for its duration as to whether Alan’s solution is viable. We have a solid sense on his viability by the end of the film but for the most part the movie never portrays him as totally evil or manipulative. He’s a human and the people who support him have legitimate anxieties, albeit ones that aren’t being channeled properly.

If there’s a lesson we should be taking from Contagion as we face the real life consequences of a potential global pandemic it’s that procedure and calmness are paramount to defeating something as dangerous as a virus. As we speak, multiple governments around the world are investigating potential vaccines for the Coronavirus and the most affected countries are ceasing air travel. Here in the United States, corporate events are largely being shut down and airlines are taking additional steps to clean their planes daily to minimize potential spreading. For the most part, the people whose vocation it is to fight diseases like this are doing their jobs and that’s the important thing. The best thing we can do in scenarios like this is to take some precautions. Wash your hands constantly. Keep a bottle of hand sanitizer near you. Avoid touching your face as much as possible. At worst, buy a few days worth of canned food and be prepared if you have to stay home for a couple weeks. Be smart, stay clean, and above all don’t panic. We’re more than likely not going to have to deal with something as serious as the virus in Contagion. 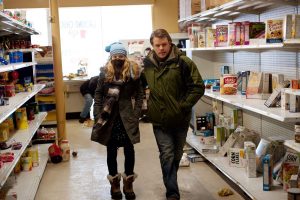 + Strong performances across the board + Intelligent, scientifically rooted and nuanced script

- Somewhat slow pacing may turn some viewers off

Contagion is one of Soderbergh's strongest films and a great thriller in its own right! As the world is dealing with the difficulties of a real world virus and quarantines, this is a great film to watch to understand how governments address problems and solve them in the midst of societal strife.