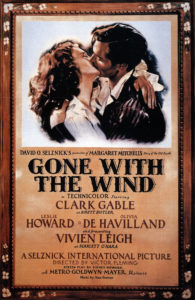 When Hollywood mega-producer David O’Selznick (King Kong, A Star is Born, Rebecca, The Third Man) started adapting Margaret Mitchell’s ultra successful 1936 book Gone With the Wind into a film, he may not have known he was producing one of the most important movies of all time, but he certainly knew he was directing an absolute monster of a film. The four-hour epic romance captured some of the most breathtaking moments ever shot on film. It has since gone on to inspire generations of adoration and harsh criticism for its portrayal of its controversial subject matter.

Violence/Scary Images: Numerous injured and dying soldiers are depicted following battles. A character has a limb cut off offscreen. Several characters are injured and die in accidents, including a child.
Language/Crude Humor: Some mild language including h*** and d***.
Drug/Alcohol References: Characters drink heavily in social settings and smoke cigars.
Sexual Content: Nothing graphic is depicted but the plot hinges on several moments of implied lovemaking, lust, adultery, prostitution and attempted rape.
Spiritual Content: Most of the main characters are implicitly Irish-Catholic.
Other Negative Content: Characters are depicted as slaves.
Positive Content: Themes of retribution, moral restitution and personal growth. 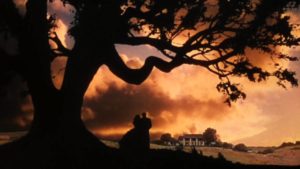 I recently had the opportunity to travel to Atlanta, Georgia, during a recent vacation in the American South. During the trip, one of my stops was at a tiny building outside of Marietta, Georgia, called the Gone With the Wind museum. For the price of $7, you’re allowed to look around this antique house filled with artefacts of the famous 1936 book and subsequent film adaptation by David O’Selznick. There are signed copies of Margret Mitchell’s first edition book, copies of the book translated into multiple languages, original movie posters, costumes from the movie and signatures from the entire cast. My trip also just so happened to coincide to a recent tragedy. Actress Olivia de Havilland, who played Melanie Hamilton in the film, died just weeks before my visit in late-July at the age of 104. The coincidence sparked my fascination enough to want to revisit the film I had only passively watched once before years prior.

Of course this didn’t happen in a vacuum. My fascination coincided with the recent “cancelation” of the film following a reinvigorated cultural reexamination of the movie by cultural activists and film critics. As such, Gone With the Wind has developed something of a rancid reputation. It’s a grand sweeping historical epic set against the Civil War, that sparsely acknowledges the role of slavery in starting the war and romanticizes the Old South as a gallant land of rebels and freedom fighters standing up against the tyranny of the Yankee invasion. It recently was removed from HBO Max following criticism on Twitter and replaced with a new introduction placing the film in its historical context. 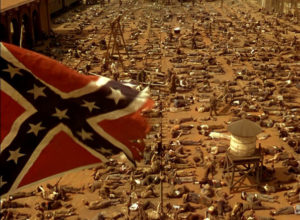 I’m going to mostly sidestep the issue for the sake of discussion. Whatever discussions ought to be had about the romantic vision of the Old South and the role of slavery in affecting modern American life, I don’t think it’s pertinent to how modern audiences will receive a film like Gone With the Wind now in the way that audiences would receive a more controversial film like Birth of a Nation or Song of the South (the former of which black activist and filmmaker Spike Lee defends as a historically vital piece of film history that ought to be understood). The movie certainly isn’t relitigating the issue of slavery and doesn’t even resort to retrograde racist slurs or insults. It mostly just ignores the issue completely and implies the slave characters consider themselves as surrogate members of the O’Hara family.

Such discussions also forsake some of the more positive and progressive things the film was capable of achieving for American culture. Actress Hattie McDaniel was the first black actress in history to win a Best Supporting Actress Oscar for her role as the slave nanny “Mammy” and had to be secretly escorted into a racially-segregated hotel by the film’s producer to accept the award on live TV. Ignoring the film’s contextual place in history ignores such a historically vital event in the history of black artists and their achievements. 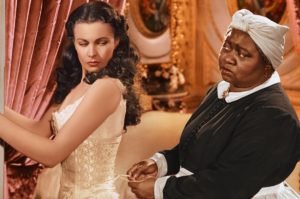 For some that’s not enough of a contribution to ignore the problematic aspects of the film that wouldn’t be tolerated by a modern audience. Certainly the names and accents of the slave characters would be considered retrograde by modern standards to say the least. The swooning romanticism of the Old South is something deeply critiqued today for its complicity in slavery. Yet in an era when a handful of civil war veterans were still alive and the South was still struggling to build its economy back, it’s clear why rehabilitating the South’s pride was tolerated at the time. The fact that the movie doesn’t acknowledge the role of human cattle slavery in its downfall is a weakness in the film, but the film isn’t relitigating the legitimacy of slavery either. It’s just speaking to the South’s sense of tragedy.

Seen in its proper context, the movie blossoms. Watching the film in its entirety as a much mature adult, it spoke to me with a complexity and breath my younger self didn’t perceive. Gone With the Wind is an absolute masterpiece of cinema that has defined generations of filmmakers that have come in its wake. It’s a sweeping populist epic that approaches the topics of war, lust, romance and death with maturity and consequence. It was also immensely successful. Adjusting for inflation, Gone With the Wind is the most successful film in the history of cinema. By modern standards, if this film came out in 2019, it would’ve earned $3.7 billion. That’s no small feat. It’s unquestionably one of the most popular and celebrated films of all time. 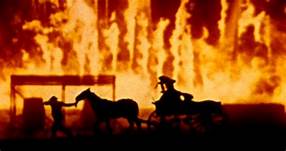 Gone With the Wind is a film about vanity and tragically failed romance. With its story set against the 1860s and 1870s, the death of the old South is juxtaposed against the decades-long failing romantic life of a young woman living in Atlanta and being forced to survive the horrific effects of war and post-war recovery. The moral vision it presents is certainly complicated and has drawn much criticism of late as the culture has shifted around it, but a careful viewer can look at the film for what it is with the understanding of where it came from. As Roger Ebert wrote in his 4/4 star review: “‘Gone With the Wind’ presents a sentimental view of the Civil War, in which the ‘Old South’ takes the place of Camelot and the war was fought not so much to defeat the Confederacy and free the slaves as to give Miss Scarlett O’Hara her comeuppance. But we’ve known that for years; the tainted nostalgia comes with the territory. Yet as ‘GWTW’ approaches its 60th anniversary, it is still a towering landmark of film, quite simply because it tells a good story, and tells it wonderfully well.”

In a sense, the movie isn’t even explicitly interested in the events of the Civil War. We never see battles and for the most part we only see soldiers suffering in hospital beds. The film focuses entirely on its lead character’s romantic life and in that sense it’s a film about being out of step with the moment of history you’re in and suffering when the consequences of the world around you start crashing down on your head. The lead character, Scarlet O’Hara, is a selfish but empowered and intelligent young woman who lusts deeply for a man she cannot marry and sets her life on a course trying to make the man jealous. She marries a man who turns around and dies in the early weeks of the civil war from sickness and then eventually marries a second man with whom she has a child. 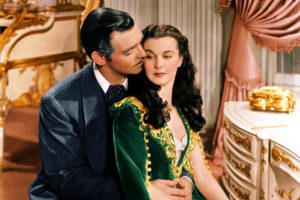 The portraits the film paints of these characters are complex. They’re meant to tolerate a great deal and suffer but they never cease to be beyond the audience’s empathy. In some ways that’s the saving grace of these characters. As bitter and loathsome as they can be against one another, their circumstances are harsher than the personalities of the people. Scarlet and her third husband, Rhett Butler, may hate each another as much as they love one another but at times you see the real love and hate boil up from underneath the careful surfaces they hold up to keep themselves at a distance. It certainly helps that Vivien Leigh and Clark Gable have some of the best on-screen chemistry in film history.

Gable stands out from the first scene we see him in early on the film. It’s clear he’s just as much out of step with the world around him as Scarlet. When asked by a proud confederate rebel about his thoughts about going to war with the North, he sardonically concludes that the South will lose the war logistically and remarks, “Most of the miseries in the world were caused by war. And in the end nobody knows what they were actually about.” He’s almost a perfect match for Scarlet’s nervous energy and pride but it’s clear their personalities are toxic together. In the end it boils into the film’s famous final scene. 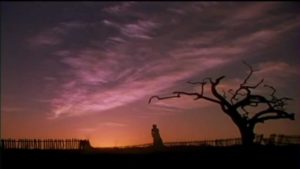 As Lou Aguilar writes for The American Spectator, the BBQ scene where he criticizes the war effort does more than just establish Butler as a sardonic bad-boy. Rhett is reading the tea leaves better than anybody else in the South. “The entire point of this scene is that the South is living in a dysfunctional world with terrible ideas, like slavery, and the wrath of God is rightly about to purge it. This is the opposite of glorification, except to knee-jerk critics.”

Gone With the Wind can be seen then as a classical tragedy. Just as Scarlet and Rhett are swept away by their lusts and lies into an abusive marriage, the South’s arrogance and refusal to change with the times brought about its own doom. I would imagine such a morally complex and operatic love story isn’t worth the implied subtext and the movie’s relaxed portrayal of slavery to some, but that’s the nature of art. It’s complex. The Old South during the time of slavery may not have been Camelot but to these characters who lacked the awareness to grapple with their sins it felt like a paradise. Because they’ve sinned, they’re made to suffer and the world around them is destroyed within and without. Still, there’s always hope for a new day in the end.

Gone With the Wind is one of the most important films ever made and one of the great accomplishments in the early years of the film industry. Just a decade after developing color and sound, the film industry was capable of producing beautiful epics like this! Whatever misgivings modern people have about its portrayal of the past, nobody can deny the importance of this film.