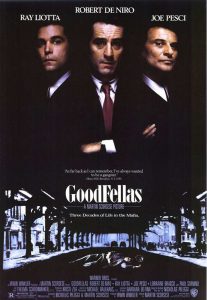 Scorsese reached something of a career peak in the 1980s. During this period he wrote and directed some of his best and most interesting works. He started the decade with Raging Bull and filled it in with movies like The King of Comedy, After Hours, The Color of Money, and The Last Temptation of Christ. While the rest of Hollywood began its descent into Blockbuster-centric myopia, he stayed true to his guns and kept pushing himself. Then at the turn of the decade once again he returned with arguably the most iconic film in his filmography.

Violence/Scary Images: Characters are shot with large blood spurts, a character is stabbed repeatedly, characters are beaten, corpses are depicted.

Sexual Content: Nothing visually depicted, discussions of rape and infidelity. 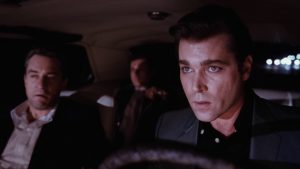 We’re finally at the big one. In the past few weeks I’ve written reviews of several of Martin Scorsese’s most popular films: Taxi Driver, Raging Bull and The King of Comedy. Naturally I’m leaping over wasting quantities of Scorsese’s filmography just focusing on these but for anyone interested in him these are the films you need to watch first. These are all, of course, excellent buts no Scorcese film has had the cultural impact that his 1990 mobster masterpiece has had. Goodfellas isn’t just one of Scorsese’s greatest masterpieces, it’s one of his most defining works from a cultural standpoint. It’s a moving, enthralling, and emotionally complex epic set against decades following the lives of a group of real life mobsters who lived by this lifestyle and eventually died by it.

The movie was notably the reunion of Martin Scorsese and Robert De Niro for the first time in nearly a decade after their collaboration on The King of Comedy. That said, unlike their previous efforts he’s not the star of the show. De Niro is merely a supporting character playing the role of the older mob boss inculcating the new guy into the group. That new guy is brought to us by Ray Liotta, who plays the archetypal Scorsese role of the young passionate man who becomes corrupted by the forces of the story. 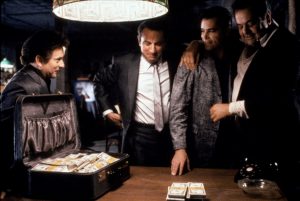 The film is based on the 1985 book Wiseguys and follows the real life story of Henry Hill, a mobster whose gallivant with organized crime ran from the 1960s to the 1980s and lead him down the path of wealth, drug addiction, murder, and eventually betrayal. While I haven’t read the book, I take it on good authority that Goodfellas is both an extremely loyal adaptation and a true to life representation of the real events with a few elements fictionalized.

The opening lines summarize Henry Hill as a character, “Ever since I was young I always wanted to be a gangster.” The film starts by contrasting acts of intense violence with the decadence and prosperity that comes to those who join organized crime. It begins as it means to go on, ironically but with a serious point to make. Goodfellas is ultimately the story of Hill achieving his goal and suffering because of it. Granted, his suffering isn’t physical in nature. At its worst it’s merely a constant anxiety about consequences of his actions looming in the distance should he get caught. Still in the moment the movie often disregards the fear though ever-present it may be. The mob is, after all, a fun group to be in at its best. 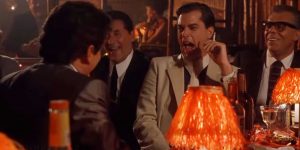 The mob is a complicated mechanism. It’s deeply protective of its own but it has complex codes of ethics that protect its members from law enforcement and other gangs. When a mobster hurts another gang’s members without permission he opens himself up for being killed. When a mobster goes against the rules of his own mob he opens himself up for being killed. When mobs can’t shut their yap and keep important information from spilling, they open themselves up for being killed. Thus is the story of Goodfellas being about the complicated nexus of living a life of crime, maintaining your honor, and still finding a way to make dirty money on the side. The movie frontloads its story with immense amounts of exposition in the narration to explain this complex web of codes which proves to be necessary given its breadth.

The emotional journey that carries us through in watching this play out is one of depth and complexity. The movie runs the gambit from scenes of incredibly abuse and horror to deep sadness to unrepentant joy and glee. Sometimes it’s able to jump between all of these tones and emotions effortlessly mere moments apart. The whiplash is purposeful of course. These are characters who can fly off the handle on a moment’s notice if you say the wrong thing at the wrong time. At any given point you don’t know if cracking wise will get a laugh out of the room or get you shot.

Goodfellas is a long movie and it’s got a huge story to tell. The plot covers a lot from Hill’s introduction to the gang as a child, his initiation, his decision to start dealing drugs behind the gang’s back, and the eventual plan to pull off the infamous Lufthansa heist of 1978, the largest robbery in American history.

While it isn’t depicted in the film visually, the immense success that heist incurs on the gang ends up being its undoing as members of the gang start making mistakes, resulting in them getting wacked one by one to cover their tracks. It’s a crystalizing moment that places immense stress on the characters in the final stretch of the film and which sets in motion the events of the ending. 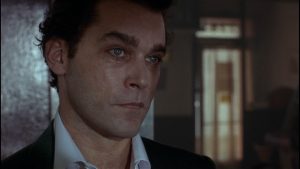 Like all Scorsese movies, the character does ultimately get punished in the end to some degree but that punishment is always undercut with dramatic irony. His punishment isn’t physical but merely against his dignity. The one thing he wanted out of life in the mob is robbed from him and he’s left alive but in a state he considers beneath his station in life.

Like all Scorsese movies it carries with it the implicit notion of existential angst. Being a mobster is fulfilling and exciting until it stops being that way. At that point your life is placed in danger, your family is placed in danger, and the best way out is merely to save your own skin. As we find out in the epilogue describing the real life character’s life, he doesn’t go on to live a comfortable life but one of continued hassle, legal problems, and dissatisfaction.

As is Scorsese’s tendency in most of his films, his view on life is fundamentally a (lapsed) Catholic one. These characters have committed acts of violence and evil on a daily basis but those acts come out of a deep inner desire to fulfill the God-shaped hole in our hearts. The power, wealth, and decadence the mobster lifestyle lends them is a drug. When the vices are removed, Hill is left only with an empty shell of a life. Maybe that’s not enough punishment for a man who has committed the sins we’ve seen him commit, but it’s certainly ironic and degrading in its own way. 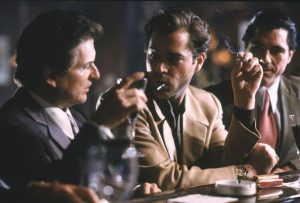 Goodfellas is known for its sweeping visual style. It’s most famous part is the several minute tracking shot which takes Henry Hill and his date through the backrooms of a restaurant which has been long since parodied and embraced by culture as one of the all time great shots in all of cinema. Beyond that though the movie’s visuals are similarly sweeping. It’s an exciting movie about characters living by the moment. Having a camera and swoops and glides through the scenes like a panorama is appropriate. It always holds long enough for us to see what we need and sometimes more than we want to.

The movie has to be able to swap between the tones of a party and an anxiety attack on a whim. Thus the style accentuates that. It’s much in contrast to its more visually conservative cousin The Godfather which is much more restrained and locked down. Granted that movie’s visual style is similarly masterful in different ways. Like I said back in Flawed Faith, Scorsese is a director who understands the appeal of sin. The dramatic contrast of the energetic fun and the chaotic consequences is the entire point of the film. Characters that live by chaos die by chaos.

You won’t find many other movies in Scorsese’s filmography that have been as widely embraced as Goodfellas shy of the occasional hit like The Wolf of Wall Street which became THE big thing of the moment when it came out. That isn’t to say his films aren’t widely embraced. They are. It’s just that none of his films are as iconic as Goodfellas. It’s not even necessarily in my top five favorite films of his (given how large that list is). Still it’s hard to deny what it represents. It’s the kind of auteur epic that every filmmaker wishes they could conjure up or participate in. It’s the demarcation of the midpoint of his career and it would forever follow him as his defining work. 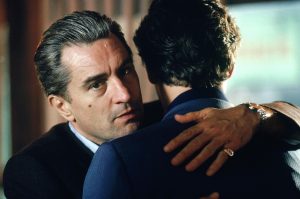 Goodfellas may not be Scorsese's best film but it's a masterpiece by any standard and easily his most culturally beloved film!