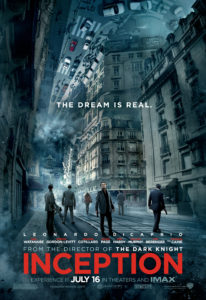 Christopher Nolan’s career started as a director of small dark-dramas but quickly accelerated with the success of Batman Begins and The Dark Knight. Following the death of Heath Ledger, Christopher Nolan’s plans for a third Batman movie were thrown under the bus. He suddenly lost the key actor who he wanted to base his third film around and was reluctant to return to the franchise after the height of his success with The Dark Knight. Warner Brothers however wanted him back for one more film and offered him a blank check to make a movie he wanted in the immediate time following his success. Nolan turned in a spec script for an idea he’d been playing with for the better part of a decade and Warner Brothers approved. That movie would become Inception. It would go on to become the film that would forever definite Christopher Nolan’s image in the public imagination.

Violence/Scary Images: Shootouts, car crashes, people fall to their death but nothing graphic is shown—most violence takes place inside “dreams”. A few unsettling scenes; for instance, a woman being run over by a train in a dream sequence, but the camera cuts away before anything graphic is shown. Appropriate for PG-13 audiences.
Language/Crude Humor: Some excessive language including f***, J***s, d*** and b*******.
Drug/Alcohol References: Characters drink alcoholic beverages in social settings, but not to excess.
Sexual Content: None.
Spiritual Content: None.
Other Negative Content: Themes of relapsing, addiction, self-loathing and lies.
Positive Content: Themes of overcoming guilt, emotional catharsis and embracing reality. 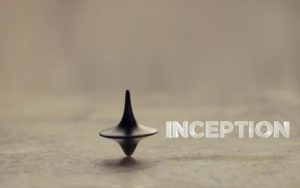 Inception gripped people’s imagination upon release in 2010, immediately setting Nolan apart as a director who could make intelligent, original and gripping dark films that the public at large would obsess over. Naturally, such a movie would garner a collection of critics and haters as this film certainly has. Logic nitpicking and mocking the convoluted setup for the movie has become a consistent joke since the film came out a decade ago. That doesn’t change the fact that the movie is essentially a dramatic masterpiece and that it’s still enrapturing the public after all this time. It doesn’t matter that the logic doesn’t totally hold together or that it takes the premise of dream-diving extremely seriously to the point where it’s almost hilariously grim for such a subject. As one critic put it, the fact that you can’t tell the difference between reality and the dream world is the point of the movie.

The movie’s structure borrows a lot from the premise of a classic heist movie. A group of intelligent and highly specialized people conceive a complex and intricate plan to steal something, and immediately things go awry when it turns out something they hadn’t prepared for goes wrong, setting back the entire operation. Now the team has to work around this problem all while trying not to get caught and losing their lives in the process. In this case, we meet Dom Cobb. Cobb is an expert in corporate espionage who delves into the dreams of important businessmen for secrets. When a mission to find secret information in the mind of a Japanese businessman named Mr. Saito goes wrong, Cobb finds himself commissioned to perform the most difficult job of his career. Instead of stealing an idea, he has to plant one in the mind of the son of a massive corporate empire, in order to stop him from creating a corporation so large that it monopolizes the world’s energy industry. 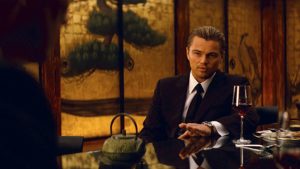 A lot of people have complained about the way Inception delivers its information. The premise is so complex that it takes the first hour of the film to fully explore the concepts of its world fully. As a result, much of the first hour is just dedicated to exposition, explaining how the science of this world works and what the consequences are for certain actions. The movie goes as far as to introduce the audience to the character of Ariadne—a young grad student from France—just so the movie has an excuse to constantly explain new concepts within the film. Thankfully the movie is very efficient with its use of time and doesn’t waste much to keep the story moving. The movie needs the audience to understand the plan for the heist before it happens so there will be some tension when things start going inevitably wrong.

Many things do immediately start going wrong… As it turns out, Cobb is deeply compromised in his work by the fact that his mind his haunted by the memory of his dead wife, who committed suicide and for whom he was blamed for the death. Now every time he dreams he’s stalked by the manifestation of his memories of her and her only goal is to cause chaos and hurt his best-laid plans. Almost immediately, Cobb’s subconscious manifests a massive freight train in the middle of a busy downtown street that briefly upsets the plan. As this happens, it turns out the brain of the man they’re trying to plant an idea in has been trained to manifest security guards by corporate anti-extraction specialists. Since the team is forcibly sedated, it’s likely that anyone killed in the dream will lose their mind to an infinite abyss of the subconscious where they’ll be forced to sit alone for eternity. Now with a clear set of consequences, limited time and the threat of near-death on the table, the mission’s stakes ramp up as they can no longer guarantee that Cobb’s manifestations aren’t going to ruin the mission going forward.

At the heart of the film is an essential question: what is reality and why do we care that we live in it? Cobb understands that living in the real world is important but his entire career focuses on convincing other people that they’re not living in reality. The dream landscapes his team concocts are all designed to look like familiar places for the victims of his scam. They act like people the individuals know in real life. In effect, they’re actors playing a game of psychological warfare with their targets. They convince their subjects that they’re awake and living out a real scenario that allows them to be manipulated for their ends.

Ironically Cobb is living this scenario out too. He’s so racked by guilt over the death of his wife that he allows himself to stop caring and live out life in his dreams where he can be with his spouse and no longer feel guilty. He warns others over the danger of losing yourself to your dreams because he knows better than anybody else that dreams can swallow you whole and make you want to leave reality. At its worst, it can get you killed. Ideas drive people more than mere reason or emotions can and he’s worried about letting other people fall into his mistakes. He’s well aware that he can’t escape his own emotions.

All of this convoluted setup, logical loops and character angst ultimately build-up to the film’s final ambiguous moments. The movie’s conclusion is famous for its ambiguity and irresolution but that’s the point of the ending. As Mikey Neumann put it best, the movie ends on a moment of ambiguity because the characters at that moment no longer care about what the answer to the question is. What is reality? What is a dream? What do these questions matter when YOU get what you want in the end? Everything in the film builds up to the moment when those questions stop mattering to the characters, even though they matter more than anything to the audience.

The heist plan ultimately seems to work and their subject successfully has a thought planted in his head that will go on to change the world in positive ways, resolving years of emotional trauma and regret. It’s also a lie and a crime. It’s a story made up by thieves to fulfill the desires of seedy corporate businessmen with ulterior motives. Yet that doesn’t matter. Everyone seems to walk away happier even if what happened to them isn’t true or grounded in reality. The movie ultimately delivers on the same tension and existential fear that underlies every one of his films: Who are we mere people trapped in this horrific thing called life and what does it mean to struggle against our fated and inevitable deaths in the long march of time? Is it better to march off to your death in a deluded fever dream or live honestly in a mist of guilt and horror?

As Film Crit Hulk writes, “… Nolan is so good at creating the Joker because he feels the terror the Joker creates so intimately.  Life itself is terror. It hits me so concretely as I watch scores of young boys lie in silent pain on the beach, waiting for a bomb to fall on their head. This is the experience of being alive. And in that truth, I’ve realized that Nolan wants the pinwheel [in Inception] to be real more than anyone. That as much as he battles, rages, and tries to outrun grief with the Cobb of his nature, he is more the Cillian Murphy character – the young man simply hoping for his father’s heart.”

Nolan’s heart is the heart of a materialistic man yearning for a transcendence he fears is a lie. He fears death, suffering and obliteration but cannot bring himself to believe that escaping these things is little more than a fever dream concocted by powerful men in the background for cynical reasons. Maybe more than any of his other films, Inception captures this irony and longing. For a movie so regularly criticized for its aesthetic trappings and convoluted logic, it’s a movie bending over backward to capture a moment of pain and catharsis that its director himself is afraid cannot possibly exist. Like all great ideas, it’s large and complex and may be created by people you ought not to trust. Yet at the end of the day, the movie ends with everyone in a better place. As Lewis once wrote, “If I find in myself desires which nothing in this world can satisfy, the only logical explanation is that I was made for another world.” Is longing so terrible?

Inception is one of Christopher Nolan's strongest films and a masterpiece of dramatic action-storytelling. It's gone a long way to informing the entire public's perception of who Nolan is as a director and remains one of his most fun and enthralling films!