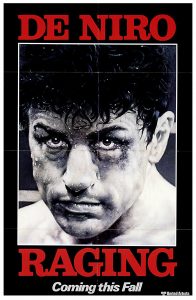 The late 1970s weren’t a great time for cinema or for Martin Scorsese. Despite the success of Taxi Driver, his career went downhill quickly when his follow-up New York, New York crashed and burned financially and critically. At the same time, he was hospitalized as a consequence of his cocaine addiction and nearly lost his life. As this was all going on, cinema was beginning a massive change from auteur driven cinema of the 70s to blockbuster cinema of the 80s. What Scorsese intended as possibly the last film he’d ever direct would surprise Hollywood and set him forth as one of the last true auteurs to survive and thrive in Hollywood.

Violence/Scary Images: Bloody fights in boxing rings, characters get into fistfights and brawl, and scenes of domestic abuse.

Language/Crude Humor: Extreme and frequent language throughout including f***, s***, and c***.

Sexual Content: A character is nearly seduced into sex and then declines, a character accuses another character of adultery, some crude language.

Positive Content: Themes of atonement, self consciousness, and repentence. 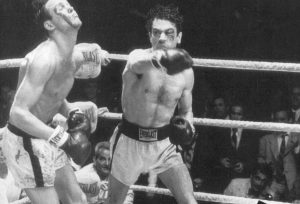 Raging Bull in many ways represented the final breath of one of Hollywood’s greatest periods of creativity and artistic freedom. When the movie was released in 1980, the New Hollywood period was fading as the immense success of blockbusters like Star Wars, Jaws, Close Encounters of the Third Kind, Superman: The Movie, and Rocky presented a new, optimistic, and commercially viable means of profit for the film industry. They were slowly discovering that there’s a lot of money to be made in nostalgia, action, and good feelings which would go on to define the entire decade of the 1980s in cinema. At the same time, across the lot from Raging Bull, United Artists had their hands full with an infamously overly-ambitious, overbudget passion project by Michael Cimino, fresh off of The Deer Hunter. That movie Heaven’s Gate, a four-hour long epic Western, would go on to flop and effectively bankrupt United Artists after its release just a month before Scorsese’s film.

While the era of the high budget auteur films that defined 1970s filmmaking was setting, Scorsese’s career was only beginning. He managed to be one of the few directors who was able to keep his creative freedom in an industry that quickly moved to capitalize off of cinema that was hostile to New Hollywood’s ideals. While he produced many masterpieces since then, many consider Raging Bull to be the director’s greatest masterpiece. The American Film Institute ranks it as the fourth greatest American film of all time. Roger Ebert featured it in several renditions of his list of the ten greatest films ever made. By most regards it’s one of Scorsese’s highest rated films and it represents some of his best work. Considering he was fresh off Taxi Driver just a few years before that’s saying something.

The years between these two early masterpieces were long for Scorsese. His first film after his Taxi Driver was New York, New York, a not widely-regarded musical mostly remembered for its theme song. He would also direct The Last Waltz during this period, one of the most well-regarded documentaries. During this time, he also dealt with a brief stint of cocaine addiction which resulted in his hospitalization. For several years, Robert De Niro had expressed interest to Scorsese in doing an adaption of a not terribly great autobiography based on the life of boxer Jake LaMotta.

Scorsese knew nothing about sports or boxing. Initially his interest in the film was primarily as a favor to Robert De Niro but the more involved he became in the progress, ran passes on the script, and worked through the story the more invested he became. Raging Bull as a whole became more about Jake LaMotta as a man than boxing specifically. The film is a vessel for many of Scorsese’s most frequent cinematic motifs: sexuality, violence, anger, Italian-American identity, religious penance, and the inner life of emotionally-damaged men. 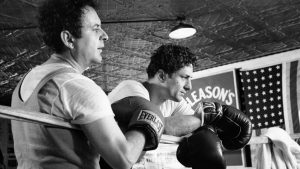 LaMotta’s journey is represented best in the first and last scenes. Set years into the future where the formerly famous boxer is now a nightclub owner in Florida, he muses to himself in a mirror in a green room as he prepares to go on stage. In the first scene, he repeats lines from Richard III to himself. In the film’s epilogue, he recites the famous “I could’ve been somebody” scene from On the Waterfront. That’s slightly on the nose but these bookends highlight LaMotta’s journey from a violent out of control maniac to a humbler, sadder man who’s undergone some level of atonement.

The entire structure is a slowly escalating series of violent clashes both inside the ring and out as Jake is consumed more and more by anger, sexual anxiety, and failure. The real Jake LaMotta was one of the greatest middle-weight boxers of all time despite losing several of his most important matches to his rival Sugar Ray Robinson between 1942-1951. His career ended following his sixth fight with him known as the Saint Valentine’s Day Massacre in which Jake lost after enduring an incredibly brutal beatdown. The fights depicted in the film aren’t dramatic, they’re hellish onslaughts of noise, flashing lights, and violence. As these fights go on and he takes more and more damage, his personal life atrophies, he becomes progressively violent with his wives, accuses them of infidelity, and goes as far as to assault his own brother.

Much of this stands in rather stark contrast to the other famous boxing franchise at the time Rocky. That film was a patriotic story of one man working to go the distance and make a name for himself using the rare opportunity afforded to him as a boxer being able to fight Apollo Creed. Raging Bull definitely had miles to go out of its way to have its own identity. Most notably, the film was shot in black and white rather than color. It gave the picture a stark look not dissimilar from the visual look of cameras from the 1940s and 1950s which helped establish the mood and setting. At the same time, it definitely toned down the intense bloody violence. The horrific fights with blood spurts and characters drenched in blood take on a completely new meaning. 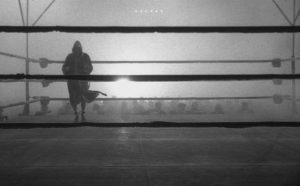 Many have pointed out the obvious visual metaphors that the slow motion moments in these fights often are made to look like LaMotta is taking the Eucharist or is being engulfed in water like a baptism. That combined with the brutality of the fights gives them an important meaning to the metaphors. The fight scenes are a kind of purgatory for Jake LaMotta. Religious symbolism certainly isn’t new for Scorsese but here the themes are often directly references. LaMotta’s house is covered in Catholic paintings which only serves to highlight the hypocrisy of his actions as he screams and throws punches at the people he loves under the eyes of God. It’s a great visualization of Catholic guilt and the dread of living a secular life with the fear of a God you only sparsely believe in or obey hanging over your shoulder.

The movie goes as far as to end on a bible quote, John 9:24-26: “So, for the second time, [the Pharisees] summoned the man who had been blind and said: ‘Speak the truth before God. We know this fellow is a sinner.’ ‘Whether or not he is a sinner, I do not know.’ the man replied. ‘All I know is this: once I was blind and now I can see.”

As dark as Jake LaMotta’s descent into violence and deprivation gets by the end, screaming alone in spiritual agony in a prison cell, is his story ultimately intended to be a sympathetic one? As reprehensible as Jake LaMotta’s actions degrade him as a human, it’s hard not to pity the broken overweight man as we see him in those moments. At that point, there’s very little of value in his life he hasn’t totally destroyed by his own carelessness. As the story closes on him, he only makes the first steps into trying to repair the damage with the small act of asking his brother for a reconciliation.

Raging Bull probably can’t be said to be one of the “fun” Scorsese movies like Goodfellas or Wolf of Wallstreet. It’s dour, slow, and doesn’t really dramatize the fights as something we’re waiting on the edge of our seats to see won. It’s really not even a sports movie. It’s a movie about a bad man spiraling under the weight of his own insecurities. What makes it timeless is in how Scorsese describes the fighting ring. He’s called the ring a metaphor for life. It’s the place where you take action. As one of the screenwriters described, the film’s ghostly first shot of Jake fighting alone  encapsulates the entire metaphor. Raging Bull is a story about the darkness inside of all men. It doesn’t matter what your personal ring is, how you live in it defines your inner life. 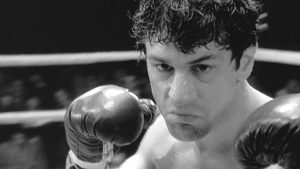 Raging Bull is a classic. It's a difficult movie that doesn't necessarily open itself up during the first viewing (as was the case for me) but blossoms the more you open up to it. It's easily one of Scorsese's most personal and important films and a masterpiece of cinema.