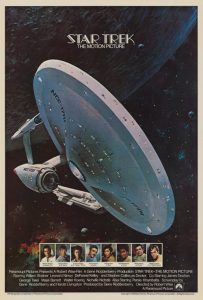 With the premiere of Star Trek: Picard this week, now is a great time to dust off the old DVDs and relive our favorite moments in one of science fiction’s more enduring franchises. Over the course of eight television series and thirteen films, Star Trek has etched out a place in culture as one of the most influential and emotionally powerful shows ever. With nearly sixty years of history behind it, naturally it comes with lots of ups and downs. Fans of Star Trek are used to bad episodes and films. With the premiere of the first film in 1979, the franchise set itself off in the direction to where it is now. Despite that success, it led with one of the most widely disregarded films in its franchise.

Violence/Scary Images: A character is vaporized, another character is burned, and two characters die grotesque deaths offscreen.
Language/Crude Humor: Mild language including G**, d*** and h***
Sexual Content: A character mentions her “Oath of Celibacy”.
Spiritual Content: A being seeks to understand his meaning in the universe.
Other Negative Content: Themes of selfishness, adolescent rage and disinterest towards religion.
Positive Content: Themes of meaning, purpose and conflict resolution. 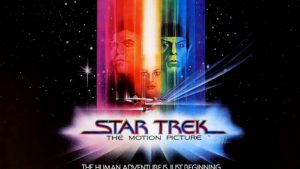 I was first turned on to the idea that Star Trek: The Motion Picture was a good movie in Mike Stoklasta’s Plinkett review of Star Trek (2009). He made the interesting case that the film was a solid embodiment of all of the best aspects of the series in regards to its themes and ideas. I didn’t get to experience the film for myself until—what I’ve come to call—”the summer of Star Trek”. In the months between the Senior Year of High School and Freshman year of College in 2013, I watched the entirety of Star Trek: The Original Series and the six core films in just under two months. Seeing it for the first time without much expectation or anticipation left me feeling quite happy. It felt quite similar tonally and structurally to the series which preceded it, and I enjoyed the experience. Subsequently, seeing the other films would reframe the experience rather radically. Star Trek II: Wrath of Khan is broadly one of the most dramatically well-paced and exciting entries in the series, and watching it in contrast is rather striking. Even so, my estimation of that first movie didn’t change.

It’s to my surprise that mine and Plinkett’s opinion on the film stands in such contrast to the rest of cinephiles and Star Trek fans. Star Trek: The Motion Picture holds the reputation in the fandom as “the boring one” of the six core films starring the cast of the original series. Considering just how far those films would fall in their lowest moments, like Star Trek V: The Final Frontier, the acrimony this film seemed to get seemed disproportionate. Upon watching the film a few years later, my opinion hasn’t changed. It’s the kind of film you really need to lay down and watch in a completely relaxed mood. It’s not exciting so much as it is calming. It’s a film born of an older era of science fiction movies that go well beyond the influences that were driving the financial side of popular films in the late 1970s. Coming out adjacent to Star Wars certainly didn’t help this film’s reputation given how completely different it is.

The movie was directed by Hollywood legend, Robert Wise, who famously directed musical masterpieces like West Side Story and The Sound of Music. As strange of a pairing as that sounds, he’d previously directed genre films such as The Day the Earth Stood Still, The Body Snatcher and The Andromeda Strain. By this point he was more than versed enough to handle a big budget production of one of the biggest science fiction franchises of all time. In contrast to Star Wars, Wise’s influences seemed to draw from the more esoteric and high-minded style of science fiction films of the preceding decade. The movie’s tone, ideas and pacing bare a significant passing resemblance to 2001: A Space Odyssey. I don’t make that comparison lightly. The movie borrows heavily in form and function from that film’s style, themes and pacing.

Still, this is all classic Star Trek. It’s a vastly upgraded version of the classic TV show. The higher production budget meant that more thought could be put into costuming and production design than ever before. The primary colors of the uniforms were replaced with white. The Klingons’ costumes were upgraded from body paint to full facial prosthesis. The starship designs are more plentiful and built with larger sets. For the first time, Star Trek was allowed to breathe more fully. The ideas for the film were borrowed heavily from original series creator, Gene Roddenberry, and his vision for a theoretical second series of the show called Star Trek: Phase II. Much of that vision became this new story.

The story picks up decades after the U.S.S. Enterprise’s five-year mission. James Kirk is now an admiral in Starfleet, and the various crew members of his deployment have gone their separate ways. Bones has retired. Spock returned to Vulcan. Others have moved up in Starfleet to higher ranking positions. The Enterprise is receiving a major retrofit at the start of the movie and isn’t even ready for deployment. When a strange cloud of energy appears at the borders of the federation, Kirk is forced to mobilize his former ship and allies in a last-ditch effort to intercept the cloud and discern its intentions before it reaches Earth and potentially attacks it. Naturally, Kirk is rather out of place in his old ship. It’s new Captain Willard Decker (Stephen Collins) that is in a much better position to run the mission, and yet the normally landlocked Admiral disabuses the opportunity to take control of the ship and relive his glory days.

There’s a lot going on thematically in Star Trek: The Motion Picture. Much of it goes rather depressingly unresolved by the end but the ideas being explored here are fascinating. Kirk and Decker’s pencil measuring contest creates a major dramatic dilemma at the heart of the film as these two men wrestle for command of the ship. The movie is playing with the idea of what it means for us to WANT something and for it to not be sensible to have it. Kirk nearly gets the Enterprise destroyed from the outset of their deployment and unintentionally kills two people in a transporter accident because of a mistake. He doesn’t understand how his ship works anymore and he needs to settle into a role that doesn’t involve having his hand on things directly.

Fundamentally, the movie is ABOUT coming to understand that which we don’t. The alien energy cloud isn’t treated like an adversary following its introduction so much as it is a mystery to be solved. As we come to find out, the cloud is just as confused of its own origins as the crew of the Enterprise is. It turns out to have a sentient intelligence at its core and it’s searching for answers to questions that the crew of the Enterprise don’t know how to answer. They all are forced to work through a struggle of short tempers, short-sighted decision making and impatience in a desperate attempt to keep one party or the other from freaking out and killing hundreds or billions of people.

The ultimate reveal of what the being is and wants ends up being one of the most bizarre and interesting concepts for a mainstream adventure movie that Hollywood has ever produced. Without spoiling, it’s almost a Lovecraftian concept. The resolution to giving the being what it wants is rather esoteric. In the end, it’s a being you couldn’t expect to have the wants and desires as a human, yet it aches with a yearning to understand its direction in life. It ends on a note where almost everyone gets what they truly want in the end and very few people have actually died in the process. It’s a moment of immense cosmic beauty and catharsis. In a story about finding meaning in a universe that doesn’t give it to you, it’s powerful to see a resolution as beautiful and humanistic as this one.

Star Trek has always been a story about people. We watch as they cast their faults into the stars. It reflects a very utopian post-Christian view on meaning and existentialism yet how it’s explored is compelling. The series has always been one of the most hopeful and genuinely wonderful explorations of the positive potential contained within humanity. With Star Trek: The Motion Picture, we see those ideas expanded and given a depth that the series has rarely permitted. Granted this is all buried in an excoriatingly slow-paced film that the majority of fans dismiss. From here on out, all of the sequels would become immensely more dramatic and character-centric. To me though, none of those films reach the depths this film achieves. Star Treks IV and VI both have interesting and topical ideas to explore but they’re nowhere near as grand and operatic. Watching these people and beings come to terms with their existence is infinitely more compelling to me than time-traveling whales. As the man says, if you go into it expecting a feature length episode of Star Trek: TOS, it’s perfect.

Star Trek The Motion Picture isn't likely to have its reputation rejuvinated overnight. It's a slow, complicated film in a series with much more exciting and fun entries. That said, it's close to my heart as one of Star Trek's most interesting films.