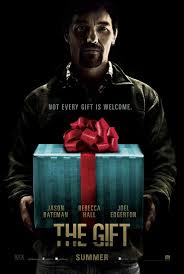 After moving back to the husband’s old stomping grounds, a couple from Chicago runs into an old acquaintance with some odd mannerisms and a strangely intense desire to be their friend. Once anonymous gifts begin showing up unbidden in their home, the couple becomes suspicious about the man’s true intentions.

Violence/Scary Images: There’s a jump scare involving a dog. Simon physically assaults Gordo during one of their confrontations, knocking him over and holding his face against the concrete.

Drug/Alcohol Reference: Characters drink wine at several dinner gatherings. Simon accused Robyn of taking pills and implies that this has been a problem in their past.

Sexual Content: Married couples kiss frequently. A character watches a tape where a man in a monkey mask is groping his unconscious wife and insinuates that he is about to rape her, though the tape cuts out before anything else happens.

Other Negative Content: Simon is harsh toward his wife and lies to her, is willing to use fraud to destroy someone else’s career in order to win himself a promotion, and has no remorse for his cruelty to others years before. The movie does, however, take a stance against these things, and we aren’t intended to like him.

Positive Content: The movie’s main theme is that actions from the past can still affect us in the present and that we should always be aware of how we’re treating those around us. Bullying is harshly condemned, though somewhat indirectly. 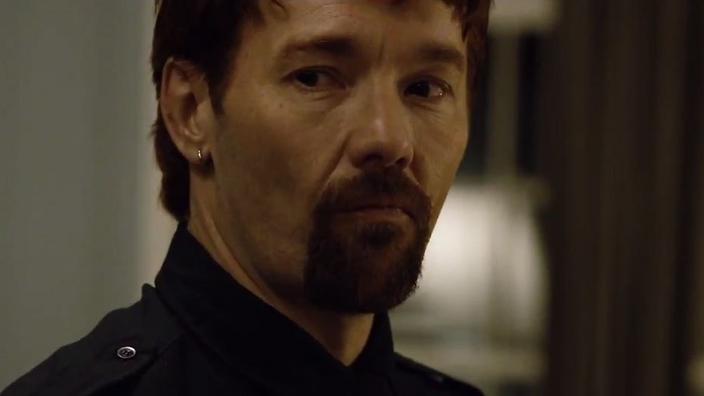 Horror, in particular, is a genre where it’s dangerously easy for even the best-conceived premise to turn into something cheesy. Which is good, when your intended entertainment value comes from the movie itself being the object of affectionate audience ridicule a la Cabin in the Woods. Just like in every genre, though, creators will sometimes arise to try to subvert those tropes and turn what was once tacky and tired into something new, intelligent, and thought-provoking. Joel Edgerton’s The Gift is certainly one of these attempts, but one with a few painful flaws.

The movie is refreshing in that it never devolves into a mere slasher/stalker ordeal, despite starting out with a fairly formulaic sequence for the archetype: a rich couple, Simon (Jason Bateman) and Robyn (Rebecca Hall), move to a town near where Simon attended high school. Shortly after arriving, they run into an old schoolmate of Simon’s named Gordo (Joel Edgerton), who attempts to strike up a friendship with them through numerous daytime visits and dinner invitations, all while leaving a series of unexpected and elaborate gifts for them in their home. Unnerved by Gordo’s behavior, Simon asks him to leave him and Robyn alone–only for Gordo to begin resurrecting secrets between the two that had once been buried in their past.

There are plenty of solid twists as everyone scrambles to learn the truth about the others and their history. The pacing could be stronger, as events unfold at quite a slow rate, but the beautifully precise use of symbolism and imagery to capture the significance of every moment helps make up for the lack of crisp plot progression. Windows are frequently featured, often at times where characters’ perceptions of one another are changing. The house Simon and Robyn purchased at the beginning is full of windows, to the point that some entire walls appear to be transparent. It’s both an interesting and creepy device that Robyn can always see Gordo coming when he visits, but only until he’s no longer wanted. Afterward, his visits persist, but he is unseen.

For horror specifically, the ways in which a film can fall into the “cheesy” category are often rooted in suspension of disbelief. Characters frequently make unrealistic choices for the sake of keeping the plot moving in the right direction, for instance, leading viewers to mock rather than sympathize with them. In The Gift, this kind of issue is averted–everyone is given at least a moderate amount of depth and acts as a believable person would. This is one of the movie’s biggest strengths. One of its biggest weaknesses, though, is that it never once made me care about any of them.

This lack of sympathy is somewhat by design. Continuing with the mantra of departing from the hallmark tropes of its peers, The Gift trades poignancy for subtlety, at many points feeling more like a drama than a thriller. A part of this is that the hero vs. villain dichotomy is broken down so that we have no clear combatant to root for: everyone has understandable pain and worries, but their actions are often despicable. This allows the film to more freely explore its themes by attributing. Ironically, I think this movie would actually be better if it leaned a bit further into classic horror territory; being more overtly chilling would help it drive home the tragic relevance of Simon’s and Gordo’s character defects and give weight to their downward spiral. As is, the movie’s messages come across as bland.

Which isn’t to say that the movie is free of frightening content, though this content at times clashes with the story rather than aiding it. Despite seeking to be subversive, the movie is plagued by some level of allegiance to convention. At various points, Edgerton inserts traditionally tense horror-type moments–such as people tiptoeing down dark hallways while dramatic music builds–which then end without any sort of payoff, scary or otherwise. This type of fake-out, especially when it’s used as much as it is here, doesn’t feel intelligent or profound. It just gets annoying. And while I get that these moments are meant to show the paranoia and psychological slippage afflicting the characters, I’m sure there must be better ways to represent this without including scenes that end up not mattering at all.

The Gift is a movie that is well-thought-out, well-constructed, and succeeds at defying the expectations of its subject matter. Its failures, though, are rooted in its success, as it prefers to completely eschews traditional horror in pursuit of a more intellectual film and sacrifices a hefty amount of the emotional potency that should back up its skillfully handled themes. While I don’t think jump scares and other cheap gimmicks are in any way substantial storytelling techniques, and I don’t need them here, a little more horror and a little less subversion are just what the stalker ordered for this one.

A well-thought-out and well-constructed subversion of the horror genre, but it's missing the emotional punch to drive home its themes.