Happy Easter from Geeks Under Grace! Last year, I made an effort to review one of the great works of Christian filmmaking in time for the holiest time of the year (or a week late as it ended up being…).

This year I wanted to do the same in time for Good Friday!

I’ve already reviewed Ben-Hur and I wanted to pick another Christian film of similar regard to talk about! Certainly, there are plenty of options: Ten Commandments, Passion of the Christ and Jesus Christ Superstar are all popular religious films. Last year’s The Chosen certainly could’ve been a great item to review but we already reviewed it last fall!

After much consideration, I ended up choosing an unconventional pick, the 1927 silent version of The King of Kings!

Violence/Scary Images: Christ is crucified and dies; no excessive blood or gore.
Language/Crude Humor: No language.
Drug/Alcohol References: Some drinking of wine.
Sexual Content: Mary Magdelene is depicted in a scantily clad swimsuit; she is implicitly a prostitute. References to adultery are mentioned.
Spiritual Content: The film is a Jesus biopic that drafts directly from the four gospels and addresses biblical themes.
Other Negative Content: None.
Positive Content: Themes of love, forgiveness, grace and adoration.

Adapting the Gospel is always going to be a fraught exercise. The Word of God is considered inerrant by Christians and thus attempts to adapt Scripture into something faithful without totally deferring to the word-for-word text of the Bible can throw some Christian viewers for a loop.

Different adaptations have tried to resolve this conflict with different ways. The Passion of the Christ drew on all four Gospels to try and craft a combined picture to fill its two-hour story. The Italian film The Gospel According to St. Matthew ONLY used dialogue from the Gospel it’s named after and pantomimed the scenes it couldn’t directly allow its characters to speak in. Ben-Hur ignored the problem altogether by marginalizing Christ to the edges of the story as a presence that haunts the narrative without directly engaging in it for the most part.

The rest of the genre strikes a balance between creative interpretation, “Hollywoodizing” and paying respect to the Biblical canon. In terms of transforming the text though, the best example I’ve seen thus far is Cecil B. Demille’s 1927 silent version of The King of Kings.

Certainly, his name doesn’t require much introduction. DeMille was one of the founding fathers of American cinema with over 70 film credits to his name over a fifty-year career in Hollywood, directing films like The Ten Commandments, Samson and Delilah, The Sign of the Cross and the silent versions of Cleopatra and The Ten Commandments. The film would later be remade by Nicolas Ray in 1961 but the silent version is widely regarded as the better of the two versions. 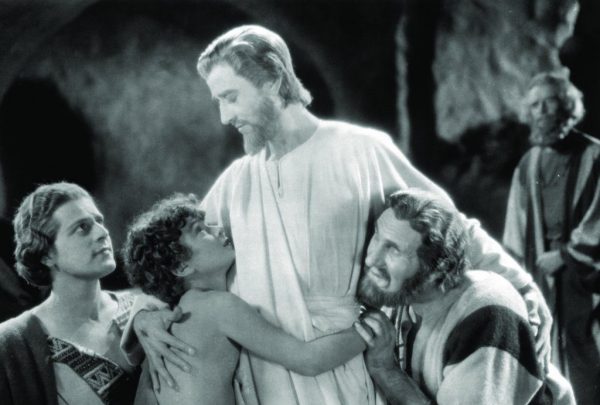 The film starts in the den of Mary Magdalene during the final weeks before Christ’s cruxification. We meet her as she is still a vain, self-obsessed prostitute perusing among the highest reaches of Roman/Jewish society. She’s all but depicted as a man-eating, cruel princess who is upset by the presence of challengers. When she discovers that the young radical Christ is coming into town, she confronts Judas, who is revealed to only be interested in serving Christ so he can have a position of authority once Christ defeats the Romans.

In Christ’s presence, Magdalene is revealed to be possessed by seven demons each representing one of the seven deadly sins (in a visually gorgeous double exposure sequence). Christ frees her of her demons, she covers her scantily clad body in robes in imitation of the Virgin Mary, and she kisses his feet in gratitude.

Once familiar with the Gospels can already see where this diverges scripturally. The story is mostly right but details and timeline are off. Mark, the Gospel writer, shows up as a child who is healed by Christ. Judas’ motivations are given more clarity than the Gospels otherwise tell us and is given a great deal of malevolence to his character. The mother Mary is depicted with the adoration more typical of Catholic portrayals of her being (odd considering DeMille was an Episcopalian Fundamentalist). Pontius Pilate is depicted as deeply sympathetic to Christ. The timeline of events is also seemingly condensed from three years down to a few weeks. 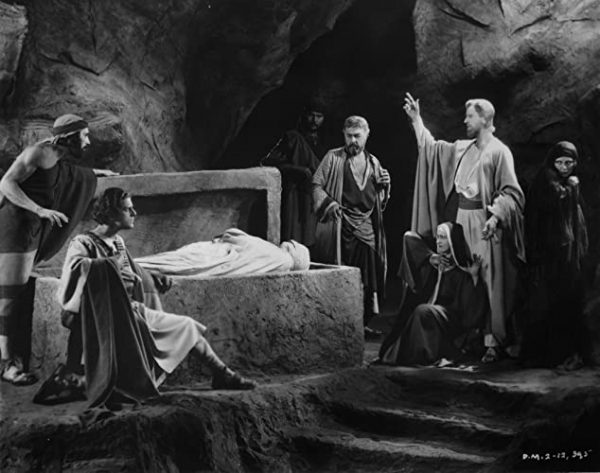 It’s clear the filmmakers took the challenge of telling this story in a new way, carrying with them their motivations and story elements. The choices all end up being super interesting though. The film was praised upon release in 1927 and immediately stood as one of the finest religious films of its time! As fictionalized as The King of Kings is, it’s hard not to say the film doesn’t directly fill these spaces in for any reason other than to glorify Christ. The film is one of the genuine masterpieces of the silent age of filmmaking!

Maybe the movie’s most profound sequence comes during the famous story wherein the crowd castigates the adulterous woman and threatens to stone her at Christ’s feet. 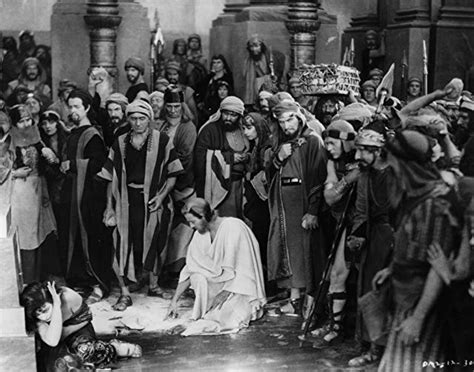 In the Bible, it plays out like this (although some translations decide to not include this passage due to the story’s absence in earlier manuscripts):

“But Jesus bent down and began to write on the ground with His finger. When they continued to question Him, He straightened up and said to them, “Let him who is without sin among you be the first to cast a stone at her.” And again He bent down and wrote on the ground. When they heard this, they began to go away one by one, beginning with the older ones, until only Jesus was left, with the woman standing there.” – 1 John 8:6-9

The Bible is not clear what the purpose of Jesus’ writing in the sand had to do with the crowd leaving. He may well have been communing with the Father or writing something addressed to the crowd.

The film adds an interesting curveball to the scene. The film cuts to the ground where we see him spelling out the Aramaic words for “Thief”, “Murderer” and “Adulterer” in the sand with his finger. It then cuts to members of the crowd shocked in the realization that Christ has looked within their souls and recognized their sin.

In essence, the film is using a vaguery in the text to extrapolate a visual way to tell the essential truth of the story. It’s a very powerful and effective way to approach the story without altering the intended meaning behind the narrative. Considering how similar Jesus stories like The Greatest Story Ever Told and The Chosen have tried to expand the narrative of Christ by adding superfluous dialogue and inventing new character backstories and motivations, I’d say this is the preferable option.

The film is, by any reasonable regard, very sincere and honorable in its depiction. H.B. Warner’s portrayal of Jesus captures the essence of the enigmatic loving Shepard image of Christ. He’s equal parts melancholy, stern and glorious, and the camera depicts him with angelic lighting and features.

The story all builds up to its climactic finale wherein the crucifixion of Christ brings about an apocalyptic doom upon Jerusalem. Earthquakes shake the Earth, the temple in Jerusalem is torn in half and mountains begin to crumble. Wind and lightning strike the land as the Jewish leader Caiaphas begs God for forgiveness. The destruction only stops when the mother Mary directly appeals to the Father in prayer to forgive the world for the death of Christ. 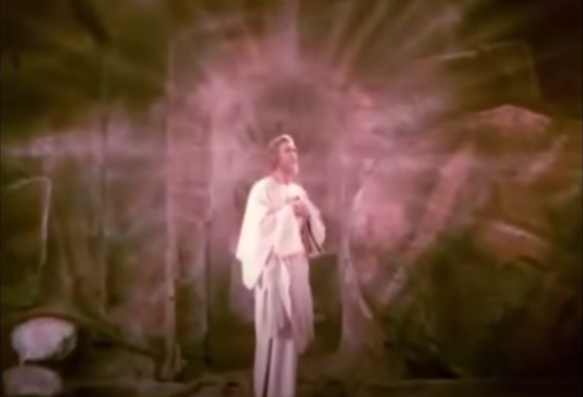 When Christ does resurrect, the film fascinatingly switches from monochrome to colored filmstock to emphasize the glory of his resurrection and the life restored by his return. Christ returns to his followers, promises to “be with them always” and then the film depicts the glory of Christ as He stands as a giant above a modern city watching His people live their lives.

There have been dozens upon dozens of film adaptations of the life of Christ but I’m increasingly content to think that The King of Kings is the most glorious depiction to date. There are plenty of other great films and stories that have been made translating, warping, subverting and reimagining the life of Christ but few of them put the quintessential truth of the message so front and center without a gimmick.

For those interested in watching it, it’s currently streaming in HD on HBO Max. There is a DVD version in the Criterion Collection however it is currently out of print. I recommend giving it a watch this Easter season!