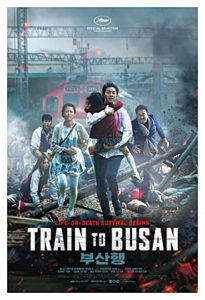 Yeon Sang-ho has been a very busy director in the past few years! In addition to his very successful Korean superhero film Psychokinesis (2018), he’s returned this year with another zombie film, Peninsula, that doesn’t seem to be accruing the sympathy his previous works have earned him. Naturally high expectations have preceded him. Ever since his international breakout zombie flick Train to Busan, Sang-ho has been among the most admired Korean directors on the international film market alongside Chan-Wook Park and Bong-Joon Ho.

Violence/Scary Images: Excessive amounts of blood and brutal deaths; characters are bitten, bludgeoned, have bones broken and die painfully.
Language/Crude Humor: Some excessive language including s***, d****t and the Lord’s name being taken in vain in the English dub.
Drug/Alcohol References:  None.
Sexual Content: Nothing depicted. A mildly crass joke is made about a woman becoming pregnant.
Spiritual Content: None.
Other Negative Content: Themes of untimely death, mutilation, and emotional distance.
Positive Content: Themes of redemption, connection and family. 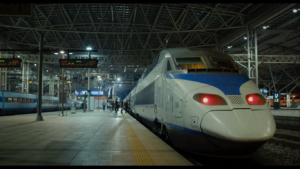 Few horror genres are more played out than the zombie genre. Following the immense success of the George Romero movies, Return of the Living Dead, Dead Alive, The Walking Dead, dozens of video games with zombie modes like Call of Duty Zombies, Left 4 Dead, Plants vs. Zombies, DayZ, Dead Island, Dead Rising, Deadlight, Dying Light, House of the Dead, Red Dead Undead Nightmare, State of Decay, ZombieU and Typing of the Dead, the genre definitely feels more than a little played out. Really the only zombie movies that feel creative anymore are comedies like Shaun of the Dead, Zombieland and Warm Bodies that tackle the genre from a less serious edge. As it stands, it’s hard to make an unironic zombie film anymore that feels genuine and effective as a thrilling horror movie.

Train to Busan was a notable exception to the tedium of most modern zombie stories. It was a minor hit in 2016 that didn’t get an overly large audience because of the “one-inch barrier” of subtitles, as Bong-Joon Ho would say. It’s a Korean action-horror film which immediately limited its audience reach since most foreign films don’t break out in the English speaking world. Being what it was, it did quite well for itself. The movie certainly is aided by the simplicity of its premise. The source of the zombie infection is revealed in the film’s prologue scene where it’s clear some sort of quarantine is in effect to cover up an unstated chemical leak in the woods that’s causing creatures to come back to life. It’s not the most original source for zombies but neither is the meteor in Night of the Living Dead.

That’s not the point of course. The movie quickly shifts gears and reveals its lead characters who it’s about to place in the line of fire. Seok-Woo is a cut-throat Korean businessman who is divorced from his wife and has partial custody of his daughter. He’s so focused on his work though that he continually fails to connect with his daughter or keep up with major events in her life. He wants to reconnect but struggles to do so, with his paltry attempts falling flat when he gives her gifts she doesn’t want. Woo plans to take her south to Busan on the bullet train to return back to her mother, but just as they leave the zombie apocalypse breaks out across Korea. Suddenly the people aboard the bullet train are forced to deal with half of the carriage being infected and the possibility that any station may be filled with the living dead.

Train to Busan is a very effective movie from the outset and puts a lot of work into setting up its ensemble of train riders. These are all normal people not expecting supernatural events to interrupt their commute but the slow horror and realization of the depths of their situation is part of how the film builds its dramatic weight. At first, the entire train assumes there’s some sort of violent anti-government rioting happening before it quickly becomes clear they’ve been exposed to the zombie outbreak already. They’re forced to quickly adapt to changing situations, learn how it’s possible to escape the zombies, and find a place outside of the outbreak zone where they’ll be safe.

The bullet train proves to be a useful tool and a horrible crutch all at once in their mission. Zombies can’t get in or out of the train so they’re safe from the ones outside, but are still trapped inside with the ones that have already boarded or been transformed. It creates moments of deep tension as we’re forced to question the nature of the outbreak and whether these characters are safe. We only know what the people on the train know. The characters we do meet aren’t complex but they’re all empathetic and understandable. We’re shown their defined relationships to one another, the way they grieve for their immediate loved ones, and we feel for their losses. 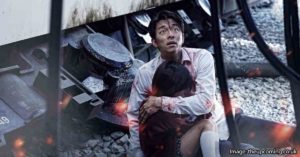 The emotional core of the film lies in its central character and daughter. Their alienation at the beginning of the movie sets them up for a story of learning how to connect again in the midst of strife and life-threatening scenarios. The zombie apocalypse provides Seok-Woo with plenty of situations to prove himself by coming to her aid. The film’s central story arc grounds the film and gives it a through-line in the midst of chaos, as we watch this large ensemble slowly shrink, make bad decisions and try to survive. All great zombie movies only work if you care for the people being put through the meat grinder, and Train to Busan makes you care.

Train to Busan remains one of the best low horror films of the past several years and one of the best hidden-gems of modern cinema. It’s a tightly turned character drama, enthralling action film, and a bloody zombie movie all at once that pushes you to the edge of your seat and keeps you there till the final melancholy moments. It carries itself on a series of extremely tense moments that capture the common humanity of people trapped in a situation with impossible odds. It’s the kind of movie that makes you thankful for how refreshing it really is.