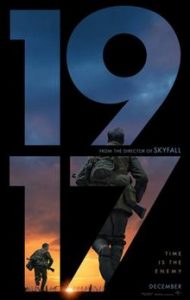 Fresh off of his two recent James Bond films, director Sam Mendes has returned with his newest Hollywood blockbuster. Set against the background of the Western Front of the First World War, two English soldiers are sent on a mission of dire importance that will determine the fate of an entire battalion. Under the graceful hand of cinematographer Roger Deakins, 1917 blossoms into a unique and exciting vision of the greatest tragedy of the 20th century. 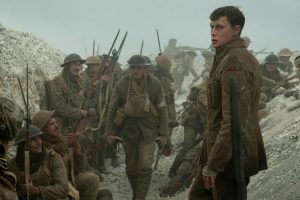 SPOILER ALERT: Mild allusions to the film’s ending but no serious plot or character reveals.

Director Sam Mendes and cinematographer Roger Deakins clearly set out with a challenge in mind as they filmed 1917. They had the challenge of bringing life to one of the most pointless and infrequently depicted major wars in the history of cinema. Mind you, it has been done before. Paths of Glory and All Quiet on the Western Front are masterpieces. That said, there hasn’t been a push to depict the First World War with any seriousness until quite recently. Given that it’s been the setting of recent popular IPs including Wonder Woman and Battlefield One, the war has been on people’s minds more clearly of late than before. For the one time auteur director of American Beauty, Jarhead, and Skyfall, it became the setting for his newest experiment.

The gimmick of 1917 is one that isn’t new. The film is shot to look like it’s one long unbroken take. In reality, it’s dozens/hundreds of smaller shots edited together seamlessly to look that way. This trick has been done before with movies like Bird Man to great acclaim. Usually though it’s not a useful gimmick. As FilmCritHulk once pointed out, long takes are great at instilling a sense of tension or grace in the audience. Stretched out over the course of an entire film though and it starts to strain the audience. Most of the greatest war films in contemporary cinema use classical cinematography with cutting; it allows the camera to breathe and find the shots the story needs to impress upon the audience HOW they should feel. 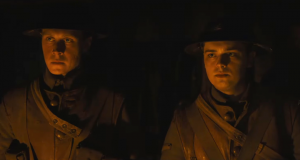 It’s appropriate then that 1917 is as stripped down of a story as one can likely tell in a war film. The story doesn’t even follow a specific battle or historical individual. This is just the story of two men being sent on a rescue mission to stop an attack from occurring the following morning. In that, it’s a stressful and impressive film that rings hallow in some respects. This isn’t so much a horror film like Saving Private Ryan, or Hacksaw Ridge as much as it’s a traditional action film. The entire point of the film is about whether or not the two characters we’re introduced to have the strength and endurance to succeed in their mission and stop a massacre before it’s too late.

That’s not a bad idea for a war movie. The film uses this basic setup to great effect. Following these characters for miles across open land and desolation gives us a powerful sense of what living in such a horrific conflict would’ve felt like. We experience what it’s like as we tour the British and German trenches. We see the grimness of death, and the rat infestations, boredom, desolation and fear that war brings as it affects the lives of the people our characters meet. I’ve seen some reviews compare it to a theme park ride but I don’t think that’s fair. There is a story here and the movie is trying to tell a reasonably serious tale about the horror of war. 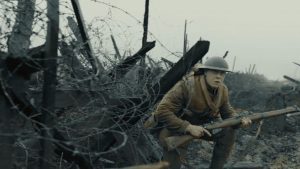 My only real problem with the film in this respect is how it executes its themes. As an action movie there isn’t much to complain about, but as a result of some of the choices surrounding its execution, it doesn’t really end up saying much about the pointless and destructive nature of war and what it meant to be a soldier in the trenches. There’s plenty of allusions and side stories that emphasize the themes. It’s best exemplified by an unexpected character death halfway through the film that comes out of nowhere and really emphasizes the arbitrary nature of war. From this point on the story really tenses as it becomes clear that there’s a real possibility that the mission will fail for these characters and that thousands will die. That ultimately ends up becoming the problem though. The movie is building up to a dramatic final confrontation that, without spoiling, doesn’t really fulfill the themes of the narrative. Executing the ending in THIS way feels like it’s robbing the movie of a more tragic and honest depiction of the conflict in question. It works as an action movie ending but it feels like we could’ve gotten something darker in its place that says more.

Maybe that’s the intention though. The primary theme of the film is the preservation of life. This is a movie about delivering a message that will save others. Everything in the movie’s form and function is dedicated to this sole mission. Maybe that urgency is the point of the film and it’s intended as a message about not rushing into conflict or being impulsive during a time of crisis. There’s probably something topical that could be written about the film in that regard.

I don’t mean to be overly negative though. 1917 did appear on my list of the best films of 2019 for a reason. Thematic shortcomings aside, the movie is a marvel. It’s clear half the reason this film exists is just as an excuse to let Roger Deakins experiment and push himself with something logistically challenging. In that realm, he succeeds with flying colors. Considering this is coming from a cinematographer that’s previously shot films like The Shawshank Redemption, No Country for Old Men, The Assassination of Jesse James, Skyfall and Blade Runner 2049, praising this film for its visuals is no small feat. The movie is intermittent; lush with color or drowning in seas of browns and greys. The mix is dynamic. We see the effects of war in living color as the areas most bombarded become dead, empty husks for miles. Behind the lines, the lands extend into endless pastures of color. Moments of rest allow the camera to focus in on moments of stillness. A scene of chaos and frantic urgency is set against a haunting church fire in the middle of the night, one that fills the sky with hellish orange air. This is top-tier visual storytelling that guides the viewer emotionally just through its visuals. This was clearly a technical challenge that Deakins and Mendes wanted to approach head-on and they achieved it.

My only critique with 1917 is just that there’s a better war film buried in here that could’ve been brought out if the story had been allowed to go to a darker place. We’ve never seen this war in the same way we saw the invasion of Normandy in Saving Private Ryan. Granted, that’s obviously not the movie that these filmmakers wanted to make. The movie is dedicated to Mendes’ grandfather who served in the First World War. With that dedication, the movie’s intentions become more clear—this is a story about a moment of heroism and honor in the midst of chaos. Normally those themes are reserved for World War II movies where they could’ve achieved something. It was rare in World War I to be brave and survive when going above and beyond the call of duty usually got you killed immediately. In a time as chaotic as the one we’re currently living in, maybe there’s some meaning to that bravery and hope. 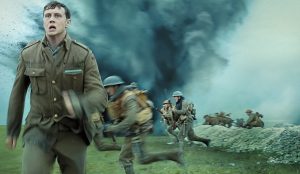 1917 is proving to be one of the most successful and adored war films in years, and it deserves that feat. There's a solid core to this film born out of a desire for these artists to challenge themselves and achieve something powerful. While I have some reservations about its themes, I can't take away what this film ultimately accomplishes!