Review: A Beautiful Day in the Neighborhood 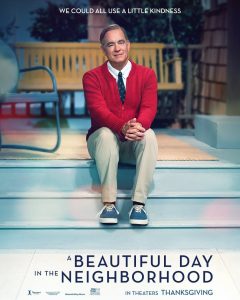 PBS TV star Fred Rogers, host of Mr. Rogers Neighborhood for the better part of half a century, became the voice of gentleness, kindness, and love for generations of children who came to know him as one of the most enigmatic people on television. As the world continues to struggle with waves upon waves of societal unrest and hostility, culture seems to be looking back and finding sources of joy and meaning to help resolve the tensions of modern life. One of those ways comes in the recent revival of Mr. Rogers as a cultural presence as we’ve seen in two recent very popular movies: Won’t You Be My Neighbhor? and the newly released A Beautiful Day in the Neighborhood.

Violence/Scary Images: Depiction of physical abuse, characters are punched
Language/Crude Humor: Some language including h*** and d***
Sexual Content: None
Other Negative Content: None
Positive Content: Themes of forgiveness, family, and love 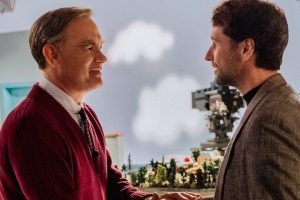 We’re in the midst of a Mr. Rogers renaissance, and I’m loving it. Last year’s Won’t You Be My Neighbor? became one of my new favorite films ever and one of the greatest documentaries I’ve ever seen. It’s not surprising why something so pure would be affecting. Fred Rogers was a man of gentle faith and kindness. He was meek in the most honorable definition of the word and he inspired love and kindness in the hearts of every person he met by offering them a level of dignity, respect, and emotional connection that’s rare in people.

For those who don’t know him and those living outside of the United States, the late Fred Rogers was an ordained Presbyterian minister who began a public broadcast children’s show called Mr. Roger’s Neighborhood which ran off and on television for the better part of half a century. In a modern, cynical world where we regularly tear down our most respected and powerful people for minor sins and where great sinners are often left to their own devices, it’s hard to imagine how to make the world a better place. Our recent fascination with Mr. Rogers suggests a culture of fascination with kindness and gentleness for it’s own sake and a hope that maybe we can work our ways out of the current societal moment by the sheer force of kindness.

A Beautiful Day in the Neighborhood is the second film in this phenomena and it’s a movie that on paper definitely has no right to work. Having what is essentially an Oscar-bait biopic about Mr. Rogers starring Tom Hanks in the lead role comes off as too sacarine and manipulative to be halfway compelling. The best way I’ve heard it described is as if this were an SNL parody version of a Tom Hanks movie. Coming in the shadow of last year’s documentary, it comes off as something of a lame “me, too” effort much in the way Hollywood frequently pairs movies together like Olympus Has Fallen/White House Down, This is the End/The World’s End and Christopher Robin/Goodbye Christopher Robin. 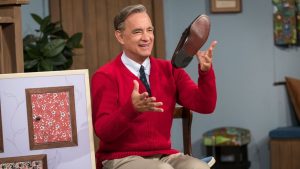 It’s to the movie’s credit that A Beautiful Day in the Neighborhood is a more lively and creative film than it should’ve been. Director Marielle Heller (Can You Ever Forgive Me?) brings a unique visual identity to a script that’s a mostly overwraught textbook docudrama and gives it an extra layer of depth and meaning it wouldn’t otherwise have. By itself, it’s a pretty atypical biopic if only in the sense that it’s not technically about Mr. Rogers for the mostpart. The main character is Lloyd Vogul. Lloyd is a fictionalized Esquire Magazine journalist who is assigned to interview Fred Rogers following a late in life run-in with his estranged father.

The trailers did not sell me on the detail of focusing on Lloyd’s perspective on its subject. It reminded me of the 2015 biopic The End of the Tour which sidelined its extremely fun lead character performance of Jason Segal as David Foster Wallace by giving Jesse Eisenberg’s character an equal prescence and voice in the film. As a result, it slightly devolved into a rutterless drama about a boring journalist/fanboy getting into vapid arguments with the nationally renowned author of Infinite Jest. A Beautiful Day in the Neighborhood isn’t dissimilar, but David Foster Wallace wasn’t Fred Rogers. Mr. Rogers acts as a surprising anti-thesis to a film that addresses a group of character’s real life adult problems and lifelong unresolved feelings of abandonment and estrangement. As a result, his arrival in any scene in the film immediately arrests problems and lets the characters talk directly about their feelings without loosing their temper.

I can’t say the actual core of the film, being Matthew Rhys and Chris Cooper’s drama about overcoming familial estrangment and forgiving one another, works on its own terms. Both actors are strangely cast and mostly centralize their characters on how aggressive and slimey they can respectively be. They don’t get compelling until much later in the film when they start overcoming their personalities. Everything interesting and unique in the film comes as an extension of Tom Hank’s immaculate performance as Fred Rogers and how he serves to convince jaded and angry people they have the ability to overcome their pain. When he’s on screen, the movie comes alive and the incredible enigma that was his personality gets put on full display. 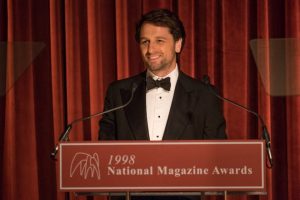 The movie also finds ways to break the limitations of a traditional biopic with its visual language. It cuts loose frequently to use the aesthetics of Mr. Roger’s Neighborhood to find creative ways to flesh the characters out by setting them in contrast to the childish, colorful world of the TV show. There are hallucinatory dream sequences where Lloyd imagines himself on the set of the Make Believe interacting with puppets and most of the establishment shots for the setting use model sets similar to the show’s opening. The contrast of this and Lloyd and his father’s real world violence, verbal abuse, and cynicism creates a stark division in the film that really reinforces why Mr. Rogers still touches the lives of adults in addition to his intended audience of children. All of this is in service to the idea that formed the creative core of Fred’s beliefs: That everyone deserves to be loved and dignified. Without Tom Hank’s performance and Marielle Heller’s unique visual language, I wouldn’t call this film anything special. It’s all too perfunctory and well-trotted territory. With these elements, the movie comes to life and justifies its existence.

Sadly, the movie doesn’t explore the nature of Fred’s personality and how it came out of his Presbyterian faith. While it’s referenced in this and Won’t You Be My Neighborhood? multiple times, it’s rarely credited as anything beyond a datapoint in his life, which is sad because it’s clear it was vital to his beliefs and motivations. He changed the world through Christian loving kindness and the world only treats him as an enigma.

All that said, you’ll probably get more out of this movie if you haven’t already seen Won’t You Be My Neighbor?, if only because many of the interesting historical details about Fred Roger’s life get explored in detail in the documentary and then come off as somewhat showy in this film if you already know about them. That said, A Beautiful Day in the Neighborhood will be a movie that most who have seen will fondly remember. 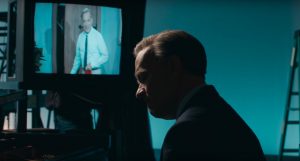