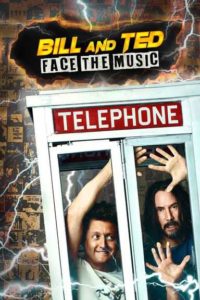 In the strange tradition of the thirty-year sequel (Blade Runner 2049, Clerks 2, Tron Legacy, etc) comes the third movie in a franchise that probably feels more diagetic and natural to see as a series return than any other major Hollywood brand. The Bill and Ted films have always been slacker movies about dumb kids in over their heads, so merely returning to the material with them as burn-out adults is a great idea conceptually. Does the final product manage to land or does it fail harder than its lead characters have failed at life?

Violence/Scary Images: Characters are vaporized by a lazer; not graphic.
Language/Crude Humor: Some mild cursing including d***.
Drug/Alcohol References: One character is implicitly an alcoholic.
Sexual Content: None.
Spiritual Content: The Christian vision of Heaven and Hell exists in these movies and the characters visit them infrequently. Jesus and the twelve apostles appear at several points in the film as one of numerous historical figures in mostly comedic cameos.
Other Negative Content: A robot character commits suicide.
Positive Content: Themes of family, love, unity and peace. 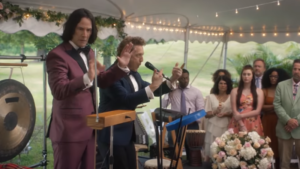 I didn’t grow up with the Bill and Ted movies. I came to them in my early 20s as an adult in the wrong age group to really get invested in a premise as silly as these films portray. That said, I was still quite charmed by them. Bill and Ted’s Excellent Adventure and Bill and Ted’s Bogus Journey are exactly the kind of silly low-stakes movies that make for an enjoyable comedy. They’re not terribly smart films but they are consistently goofy, creative and endearing. As such, the prospect of a third film coming at the height of Keanu Reeves’ late stage career revival was exciting! What would the actor who is currently most famous for the John Wick movies be like reverting to his original comedic persona?

Bill and Ted Face the Music doesn’t waste time and makes it clear right away just how similar it is to its predecessors. Despite twenty-five years passing in the film from the ending of the second movie, the now older characters are trapped in a suspended late-adolescence trying to capture the one moment of glory they’ve been prophesied to fulfill their whole life. The movie expects some level of familiarity with the first two films, but in short: Bill and Ted were a pair of slacker teenagers who received a time machine from the future with the prophecy their music was eventually going to create world peace and turn the future into a paradise. Clearly that hasn’t happened yet and the adult Bill and Ted are just as musically incompetent as their younger selves.

With the additional burdens of crumbling marriages and two teenage daughters they feel they’re failing, their circumstances are thrown into chaos by the realization that the timestream is breaking down and they won’t be able to save reality unless they write and perform their world-changing song in less than an hour and a half. In order to do so, the two decide to travel into their own future and steal the song from themselves to bring back and perform at the prophesied time and place. While their dads are galavanting through the future, their daughters, Billie and Theodora, decide to go on a parallel journey to the past to arrange a collection of history’s greatest musicians to help their dads perform the concert when they get back. 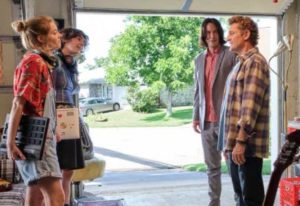 It’s uncanny just how much Keanu Reeves and Alex Winter revert back into their previous roles. Keanu has two major franchises under his wing and built up a massive persona as an action star in the intervening years, while Alex has moved on mostly into documentary filmmaking. Twenty-nine years later and the two of them still have what made the characters of Bill and Ted work and feel original. Those movies were never masterpieces but their lead characters were always loveable and entertaining. Their Californian accents, long hair, love of music and head-in-the-clouds view of the world are infectious. They’re genuinely happy and well-meaning people.

Bill and Ted Face the Music never takes these characters to a terribly dark place but it throws problems at them and asks how they ought to be fixed. The ticking-clock element of the film puts them under pressure and makes them realize just how much they need to solve and quickly. They don’t just need to save the world with their music. They need to be better husbands and parents as well.

At times the movie’s execution of its plot and time travel logic feel a bit scatterbrained. There are a lot of characters in different places trying to accomplish seperate goals and at times it’s unclear how they’re planning on digging their way out of a narrative rut. Rest assured though, it’s a Bill and Ted movie. Death itself doesn’t even get in the way of these characters. They made friends with Death in the second movie and even added him into the band! Digging themselves out of crazy situations in elaborate, ridiculous ways is their job. 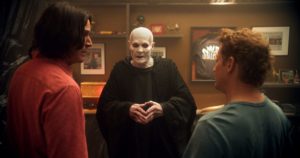 As a quote from the late Rufus (George Carlin) in the movie goes, it’ll all make sense in the end. The movie darts across time and space, going on tangents and digressions across timelines and the afterlife until finally building up to its glorious finale where it becomes the most joyful and cathartic film I’ve seen in a while.  I don’t want to oversell it because it’s a Bill and Ted movie so it’s not exactly shooting for Shakespeare in terms of its quality, but if you’ve seen the previous two films you can rest assured it’s a film easily on par with those movie. It takes the loose, laid-back and optimistic nature of its characters to their logical conclusion and gives them the happy ending they’ve been struggling to earn for their entire lives.

Again, the movie is what it is. Bill and Ted isn’t everybody’s cup of tea and I know people who probably won’t enjoy it just because they don’t appreciate the previous films. Speaking for myself though, this movie was an absolutely wonderful shot in the arm of joy and happiness. This has been a long year and Bill and Ted Face the Music is one of the best films that could be dropped on an exhausted public itself dealing with major problems worldwide. If not just because of its moral lesson about responsibility and selflessness, the movie is a great celebration of love, music and unity. Bill and Ted Face the Music is the feel-good movie of the year!

You already know if you like Bill and Ted from their previous two films. If you liked them, then you'll love Bill and Ted Face the Music! It's joyful, chaotic, optimistic and funny in all of the same ways its predecessors were!