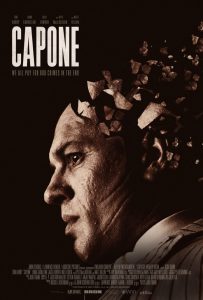 Sometimes you just want to see a film because the director is infamous and sure to produce something that’s interesting to watch. Thus when the director of Fantastic Four (2015) announced his newest project, I was already excited to catch what was going to be one of the year’s strangest projects. Little did I know going into it that I was about to experience arguably the worst and most morbidly fascinating film of 2020.

Violence/Scary Images: Significant violence, bloodshed and disgusting imagery throughout. A character is stabbed to death brutally, several characters are shot, and a character imagines himself being hit by a car.

Language/Crude Humor: Extreme language throughout including f*** and s***.

Spiritual Content: Characters in the film are implied to be Catholic.

Other Negative Content: Themes of defiling one’s self, degeneration, and death. 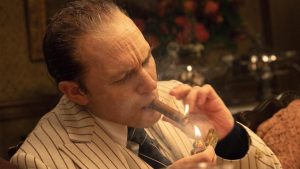 Americans love outlaws. As a country born in rebellion, we’ve lionized a lot of outlaws and lawbreakers in the past two centuries. Billy the Kid, Jesse James, Bonnie and Clyde, and Jordan Belfort have gained a bizarre celebrity status in our culture as libertine romantics with larger than life personas. Of the lot, Al Capone is likely one of the most infamous. The famed Chicago mob boss and prohibition violator was at one point one of the most powerful and terrifying men in the United States. He had an empire that gave him influence over half of Chicago’s police department, dozens of small businesses, and the entire illegal alcohol trade in Chicago. He was so powerful, his mobsters could commit bombings and murders with near impunity. Despite all this, he was beloved by the masses of people who saw him as a celebrity.

This romance of his celebrity status survives to this very day, reflected by the fascination of the mobster genre in American cinema. Films like The Godfather and Goodfellas have cast the life of Sicilian mobsters across the United States as epic tales of crime and lust. Despite the fact that these films portray the mob negatively, they’re beloved for the grandeur and gravitas that the genre awards to men like Al Capone. Thus the weirdness of 2020’s most surprising and bizarre independent crime-drama, Capone.

The film comes from the once blacklisted director Josh Trank, whose last film, Fantastic Four (2015), was one of the most unanimously hated, wrongheaded, cheap and horrific adaptations of a Marvel Comics property in the past twenty years. Naturally, hearing that Trank had made a new film was fascinating. It’s not surprising the film dropped like a rock upon the film press. The movie was immediately excoriated and mocked by critics and cinephiles for its bizarre plotless story, Tom Hardy’s over the top performance, and disgusting use of gore and human bodily fluids (there are no less than three scenes where the main character poops as a punchline). It is however a supremely fascinating movie in the same way Cats is. It’s a whirlwind of chaos, hallucination and materialist disgust for the human body. 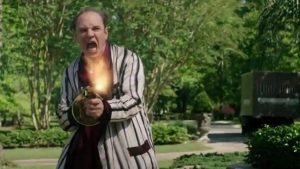 Josh Trank is a director who is fascinated by body horror and man’s ability to unleash terror upon their fellow man. His best film, Chronicle, was all about the horror of beings who gain immense power and use it on one another. Fantastic Four‘s most notable sequences are the body horror scenes of human beings transforming into twisted abominations or unleashing their powers upon unsuspecting innocents. Capone is an extension of the same materialist horrors of his other works, and it gains some weight from the way our culture epitomizes criminals like Al Capone. As we see in films like Millers Crossing, Scarface and The Untouchables (all films that echo Capone), our culture has a deep fascination and romance with the IDEA of men like Al Capone.

As we see in the film’s prologue, this isn’t a biography of the man at the height of his power. The film is set in the final year of his life as he’s dying from syphilis, along with losing his mind to brain rot and dementia. We don’t see the towering criminal of his youth at any point in the film. From start to finish, we’re experiencing the life of Al Capone from the least romantic moment in his entire life. He’s a bumbling, clumsy shell of a man who is prone to lashing out against his loved ones in aggressive fits. His body is ailing to the point where he can’t control his body functions, feed himself, and at times he can hardly even speak.

Seeing such a pathetic, uncontrollable, and petulant man in the place of an infamous mobster is depressing and grotesque. It is an accurate depiction of mental degeneration though. As a man who has watched members of his family dissolve under the weight of dementia and alzheimers, I can speak to the way such diseases hollow out a person. Over the course of a decade, you watch an intelligent and complex person break down to the point where basic functions of social etiquette and life are dissolved from under them. The saddest part is that the person doesn’t know they’re being obtrusive. They can only react to immediate stimuli, and if they’re lucky, they recognize one or two of the people surrounding them up until their final moments. It’s a sad, lonely, and confusing way to die.

Hardy’s performance does seem to be working with a strange understanding of this mindset. He approaches the role of Capone as a character who is simultaneously aware of his reputation and of his ailing mental faculties. Much like his performance in Venom, he is elevating grotesque material into a performance greater than the film itself.

Despite his degeneration, the world around Al Capone in this movie is turning, with the understanding that Al Capone is still the mobster he was a decade before. At one point, FBI agents are seen debating whether it could be pertinent to ramp up spying efforts on Capone because of his reputation and standing as a living monument of one of the darkest moments of American prohibition. While the FBI don’t seem to care about him, they still have spies sitting on the street corner outside his mansion on the off chance he lashes out and does something.

Capone himself seems to be struggling with this contradiction as well. He realizes that he used to be the king of Chicago but his rapid degeneration has left him a shell of his former self. He hallucinates reliving the memories of his glory days, but barely manages to function within those fantasies. He bumbles his way through visions of his henchmen committing murders he sanctioned without any context as for why. All he’s left staring into are the bloody results and the happy memories that surround them. At one point, he tries to recapture his image as a gangster by running around with his tommy gun, but only manages to harm his family members and homemakers. He seemingly is devolving into a machine-like body only capable of enacting his emotions, lost without context for why he’s committing atrocities. At one point he even lets slip that he may have $10 million dollars hidden somewhere, but no evidence of the prize is ever found by his family or the authorities.

He’s functionally incapable of any action that doesn’t harm himself or his family. His legacy is dissolved to a story he hears on the radio while the actual man fades away into nothingness. Capone ends up being a weirdly fascinating metaphor for elderly degeneration, legacy, and the loss of bodily control. We see a man who was once a legend for being in control of one of America’s most powerful cities, who is reduced to someone who cannot control his own body fluids. Half of the movie is just him dissociating while his more sensible family members around him comment upon his mental state.

None of this makes Capone a genuinely good movie, mind you. It’s a gory, gross, and bizarre film that lacks a foundational structure, narrative consequences, and emotional weight. By zapping all of the romance of its signature character though, the film does manage to accomplish something that’s somewhat interesting. It adds humanity and physical disgust to a genre that usually plays up its outlaws as romantic legends. Unlike Scarface or The Wolf of Wall Street, most people aren’t going to want to emulate this outlaw. People want to be Tony Montana or Butch Cassidy going out in a blaze of glory. Nobody wants to be the only man dying of syphilis with their best days behind them.