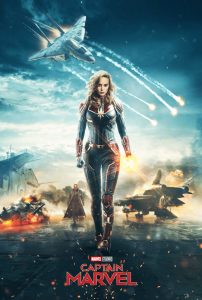 After starring actress Brie Larson sparked controversy with her racist and sexist comments against Marvel’s primary audience, along with many viewers I became wary about this new superhero flick. The outrage was so vast Rotten Tomatoes even had to change how its website functions. However, the 2012 graphic novels had a fun concept that explores a different aspect of the Marvel universe with a female lead who is a fantastic character without shoving the politically left feminist message in our faces. Thus I still had to see this new potential blockbuster.

Violence/Scary Images: Gun fights and fist fights. Characters are killed by bullets and laser blasters. Some red human blood and alien green blood is shown, but nothing excessive and no close shots on wounds. An alien swallows six guys at a time whole, though no gore is shown.

Language/Crude Humor: Mild swearing occasionally and someone makes a comment against Carol Danvers becoming a pilot in the Air Force saying, “There’s a reason why it’s called a cockpit.”

Spiritual Content: The Kree people see the AI known as the Supreme Intelligence ruling their planet as sacred.

First of all, I know that Larson’s comments were very unwise, but I must say if we started boycotting movies every time a starring actor or actress made a controversial comment or even just a comment that’s against our beliefs we wouldn’t see any movies at all. Ellen Page has made strong comments against Chris Pratt for his outward Christian beliefs yet we still watch her in X-Men and the Umbrella Society. Ian McKellen is openly homosexual though we still adore him as Gandalf the Grey in the Lord of the Rings and the Hobbit films. I’m not condoning these actors lifestyles or words, but it is a reality in our world today. Captain Marvel is a great movie and it does not reflect the attitude of the actress at all. It’s a typical fun Marvel romp. Not a political soapbox film.

The character of Captain Marvel has been around since the first issue written by Stan Lee and Gene Colan and published in 1967 and actually started as male. The character has gone through several incarnations switching between male and female carrying the same hero name but different secret identities. The film draws elements from all of these roles, though primarily the 2012 Captain Marvel graphic novel series centering around Captain Marvel’s latest incarnation as Carol Danvers who in past comic issues carried the superhero name Ms. Marvel. Since 2012, she has been woven into comic plots revolving around the Avengers and the Guardians of the Galaxy.

The Captain Marvel film has its own uniqueness between the time period and a fun mix of alien and humans. Threads that have been put out from the past films are tied together as mysteries of the past are unraveled–including how Nick Fury got his infamous eye injury. Duhn duhn DUHN! The plot moves at a great pace as we unravel the mysteries of Vers’ past and discover clues about a whole other matter altogether. Speaking of the 90s, if you lived during that time period then you’re going to enjoy a whole other host of jokes.

Vers is a spunky, brave, and kind. Just a great character all around. Yes, that’s great that she’s a female Marvel superhero lead (DC also did that a couple of years ago with Wonder Woman in case anyone forgot), but the movie isn’t about her being a woman in a man’s world (thankfully). Though there are two sequences where some comments about women having a harder time in the military are made, other than that it’s another superhero origin story about another great hero who fights for good and justice. So if you were dreading that this movie was hijacked by the modern feminist movement, you can let out a breath now.

Samuel L. Jackson seemed to be having the best time as a young Nick Fury and I think he was quite enjoying sipping so many glasses of iced tea in the scenes filmed in Louisiana. His dynamics with Vers made for many laughs and his love for Goose the orange tabby cat–well that just stole the show. Ben Mendehlson, Jude Law, and Lashana Lynch make for a great cast of side characters.

Overall, Captain Marvel is not a film to boycott. This is another fun installment in the Marvel Universe and definitely an essential piece of the puzzle in preparation for Endgame. Don’t forget to watch both of the credit scenes!