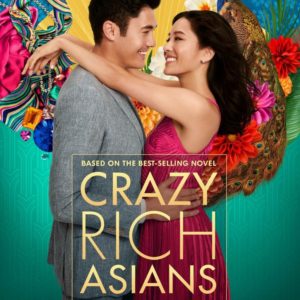 When my wife, Jacquelyn, and I started attending Vineyard Church of Ann Arbor in 2017, we just-so-happened to have befriended an interracial couple comprised of a white man and a Chinese-American woman. The latter invited Jacquelyn on a girls’ night out to see Crazy Rich Asians upon its release. She loved the movie so much that she ordered Kevin Kwan’s titular novel at once. She put it down in a day, and queued up the other two books in the trilogy, which she also devoured with intimidating vigor.

She implored me to at least watch the movie, but I prickled because movie adaptations rarely live up to the book. Some time elapsed—years in fact.

After recently finishing an emotionally-draining article, I did not feel like doing much of anything. Conveniently, Crazy Rich Asians was in the YouTube TV rotation, and so Jacquelyn took advantage of my morose state. I did recall that our Best and Worst Films of 2018 roundup mentions Crazy Rich Asians because of the accolades it was receiving at the time. However we never published a review of our own.

No better time than the present! 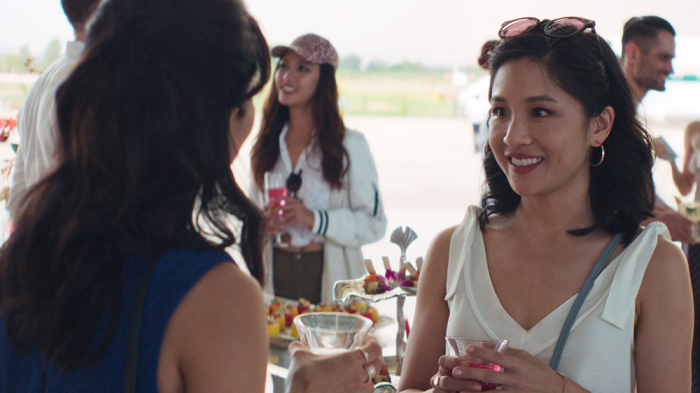 Drugs/Alchohol: Viewers will be hard-pressed to find scenes where alcohol is present. To whit, only one character reaches the point of inebriation.

Violence: None. Even when some drunken hecklers describe another man’s girlfriend in an unflattering way, another man prevents him from physically retaliating.

Language/Crude Humor: Profanity is used sparingly, but when it appears, it does so with emphasis. Of special note is one f-bomb, and the now-famous “Bak-bak b***h.” 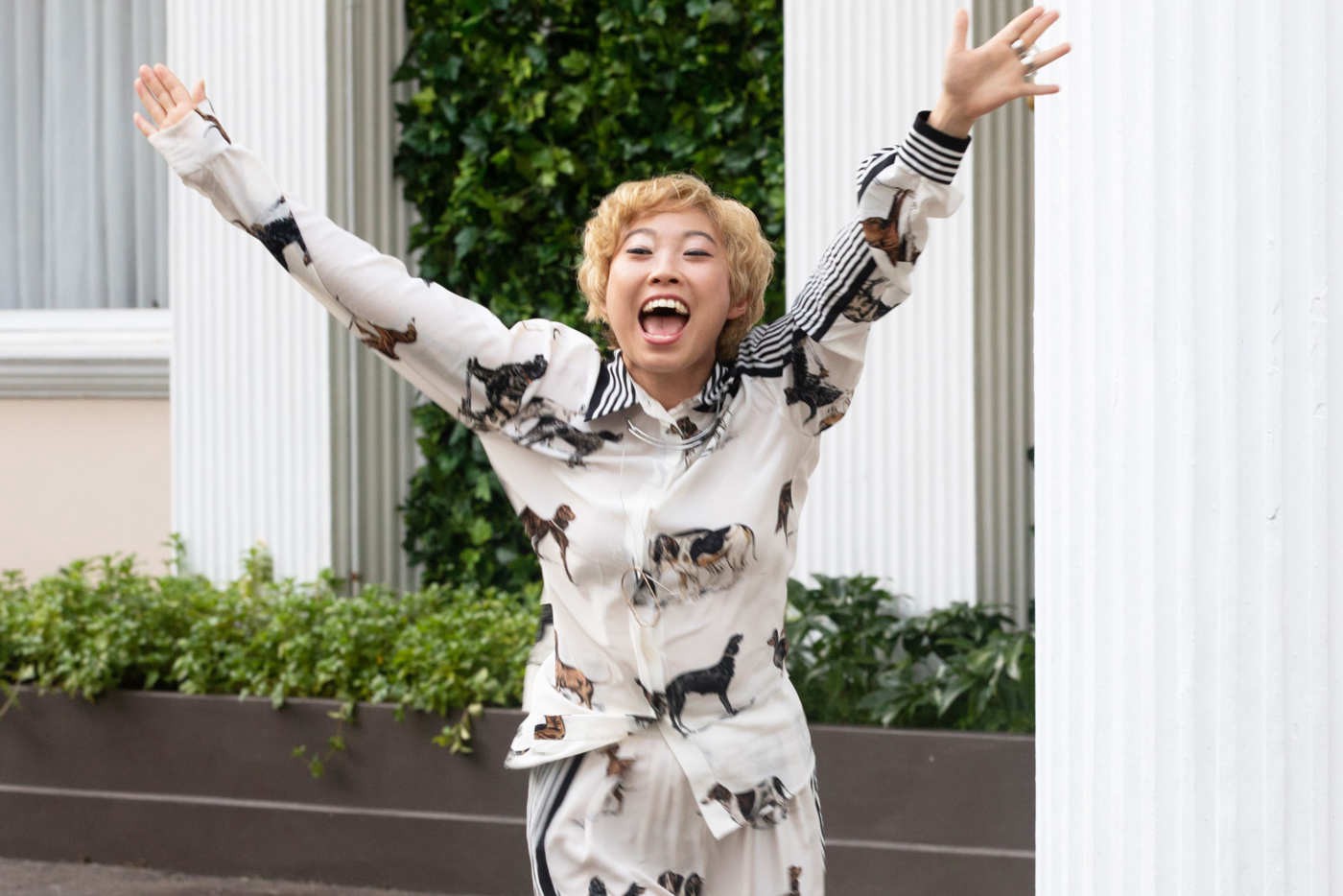 Awkwafina’s attempts at humor are more offensive than her profanity.

There are a few sexual innuendos and metaphors, but they are tame. For example, an extra in the background describes the small breasts of a woman as “ant bites.”

Sexuality: The film depicts several pool and beach parties. Naturally, one can expect to see women in swimsuits. However, Crazy Rich Asians primarily appeals to the female gaze. Shirtless Asian men appear in what feels like every fifteen minutes. This is a fascinating, intentional subversion of how Asian men have been desexualized in American culture (to contrast with the hypersexualization of darker BIPOC). 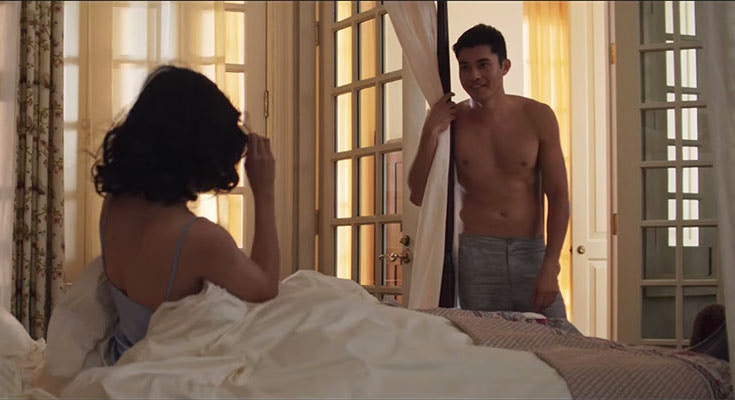 Director Jon Chu wants everyone to know that Asian men are manly.

As a gag, a side-character misbehaves during an afterparty, at a wedding and sports a golden speedo in the background of a party scene.

Spiritual: Non-Christian or Christian-adjacent (think Tyler Perry) movies depicting characters praying in earnest or reading directly from the Bible are rare. Crazy Rich Asians contains a full transitional scene with Michelle Yeoh’s character leading a Bible study. According to Jacquelyn, this scene is included to reference Singapore’s history as a British colony, which is how Christianity got there.

The translation of this smug smile is, “I own you.”

Racism and Bigotry: Crazy Rich Asians gets this one out of the way quickly in the opening scene. Eleanor Sung-Young (Michelle Yeoh) arrives soaking wet to the Lancaster Hotel in London, with her mud-tracking children following. The concierges and manager insist that there are neither reservations nor rooms available, with the subtextual tone being for her kind. But this is a romcom, so the audience need not sit with the discomfort of this discrimination for long. The takeaway, though, should be that even if BIPOC encounter the real-life equivalent of the infinite money code, that does not save us from encounters with racism. 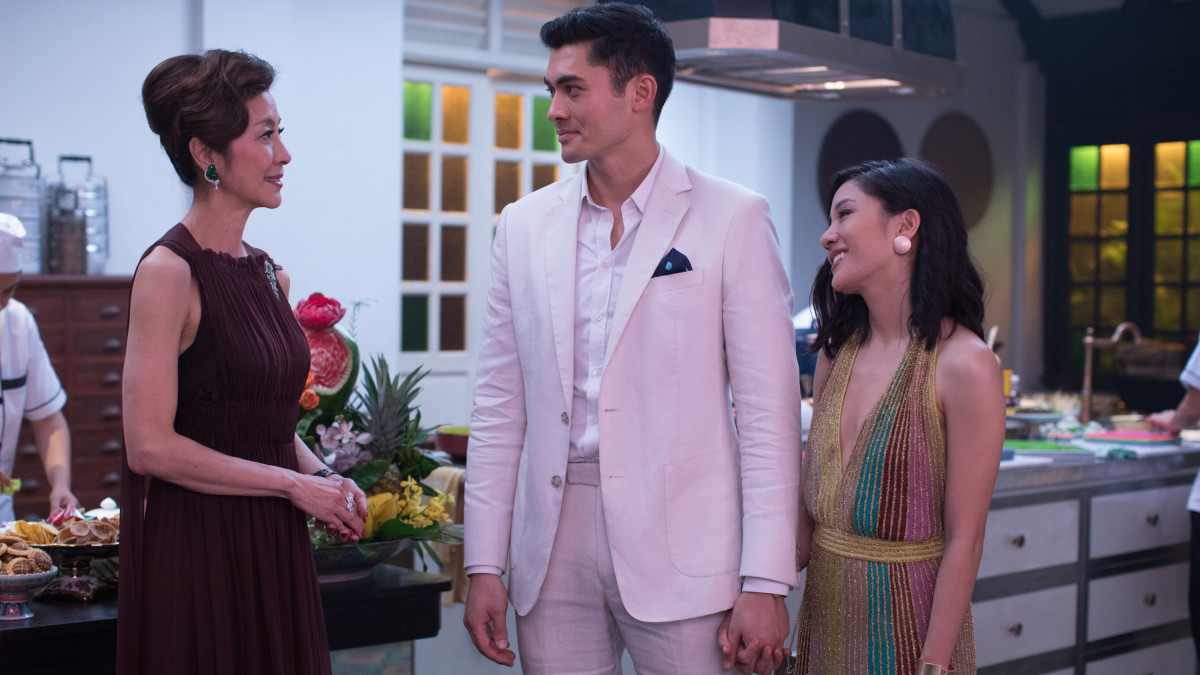 Meet the Parent, Asian edition. Suffice to say, Michelle Yeoh’s poise steals every scene, even as she undermines the chosen protagonists.

Two star-crossed lovers—oop! A rich prince hails from a foreign country and comes to America in search of a wife—wait. A goofball with an equally goofy name tries to convince his girlfriend’s dad, an ex-CIA operative that–whoops.

Okay, let us set the record straight. Romance movies do not tend to be original. I am certain my dear readers could think of several other films that could conform to some of the above descriptions. Crazy Rich Asians  does not reinvent the wheel, either. 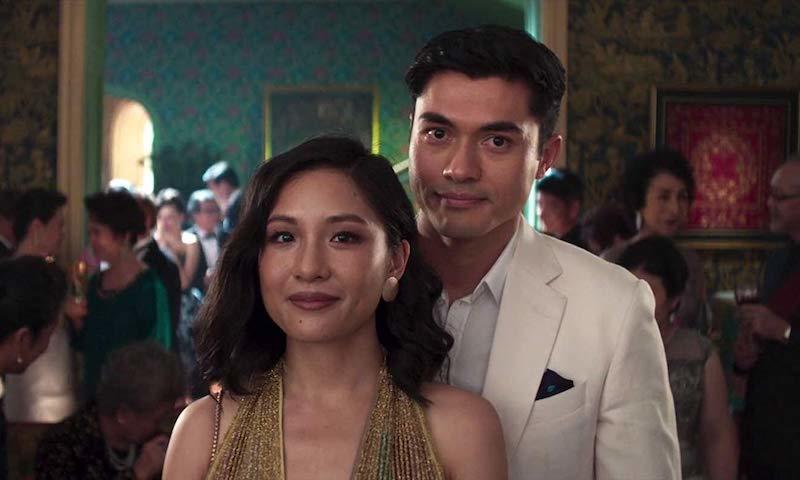 A male heir to a wealthy Singaporean dynasty, Nicholas “Nick” Young (Henry Golding), travels to America perhaps not in search of a wife, but love serendipitously falls into his lap nevertheless. He could have practically any (Chinese, Malaysian, Singaporean, Tibetan, or Hong Kongese with the language barrier removed) woman he wants from the motherland(s). Instead, he chooses Rachel Chu (Constance Wu), a Chinese-American economics professor.

The film expects the audience not to recognize that Nick is rich until a nearby Paparazzi wannabe takes a sneaky selfie with Nick as a background feature and circulates it among her friends. Rachel herself does not catch on to Nick’s Prince Charming act until they catch a first-class international flight to Singapore so that she can…”meet the parents.” He then gives her a rundown of his crazy/rich/Asian family. Roll credits!

Nico Santos puts on his best Say Yes to the Dress performance in his portrayal of Oliver T’sien (center).

While Crazy Rich Asians tries to sell everyone’s confusion that Nick would choose an “unremarkable” woman like Rachel, his family and friends’ disappointment comes at the cost of betraying the fact that Rachel is a down-to-earth woman who does not care about Nick’s wealth. But because Shakespeare has dictated that all comedies begin with strife and everyone gets married at the end, the appeal of romcoms is the journey rather than the destination. With this in mind, Crazy Rich Asians goes through the motions up until the plot twist concerning Rachel’s past that drives a wedge in her relationship with Nick. 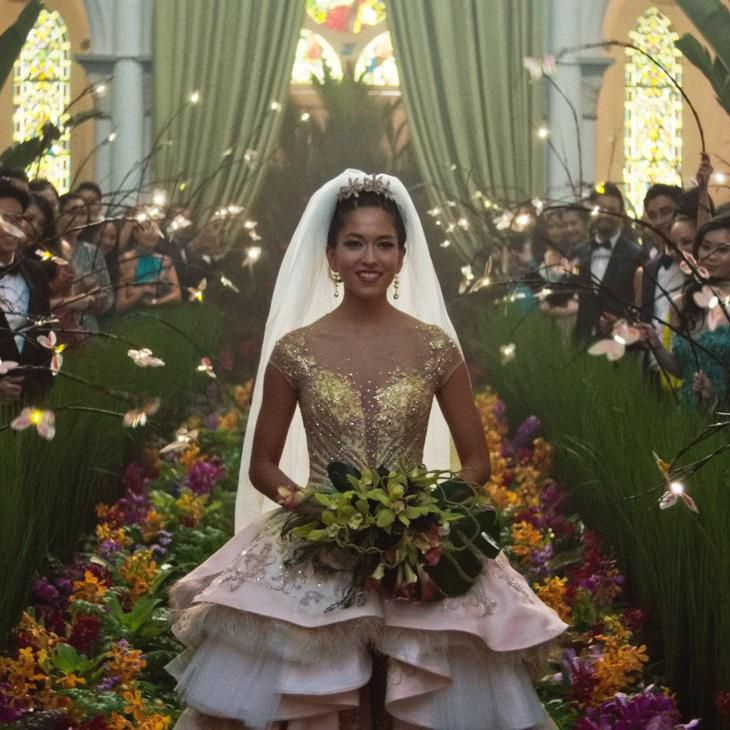 Crazy Rich Asians focuses so much on Nick and Rachel that the film loses sight of the fact that Araminta Lee is the one getting married.

There are only so many ways that I can say that viewers should not expect to see much that they have not seen before in other romcoms. Crazy Rich Asians‘ claim to fame, then, is its majority-Asian cast for a Hollywood-produced film featuring a blend of Western and Eastern culture. In this way, the film interestingly portrays how Oriental tradition resists Occidental modernization. As with Joy Luck Club (1993),  Chinese women ruminate on the merits of honor and duty over personal happiness; a popular theme in fiction that includes Asian demography.

On that note, I would have preferred that Crazy Rich Asians break the rules of creative writing by telling more along with the showing. Jacquelyn provided for me practically all of the background information concerning how the Chinese emigrated to Singapore and established themselves as tycoons in various industries; she had to pause the movie to explain to me why these Asians are “crazy rich.” Rachel befriends Goh Peik Lin (Awkwafina), who is part of a family so rich that she drives an Audi R8—the same car Tony Stark drives in the MCU! And yet, the Young family’s fortune dwarfs hers and her dad’s, Goh Wye Mun (Ken Jeong).

Awkwafina in her R8 pulls up to the Carcosa Seri Negara. This Malaysian location was used as a stand-in for Tyersall Park, which is located in Singapore. Jon Chu can’t fool my Google-fu!

The film’s attempt at opulence was lost upon this ignorant, poorly-traveled American, who needed to Google some of the locations that Director Jon Chu highlights, such as the Marina Bay Sands, the Newton Food Centre, and CHIJMES, a former Catholic convent that is now used for the kinds of things that perturbed Jesus enough to flip tables in his father’s house. We generally take for granted the San Francisco Bridge, the Eiffel Tower, or the Statue of Liberty in movies, knowing where they are and why they exist due to the cultural dominance of the Occident. I consider Crazy Rich Asians a failed opportunity to shift perspectives, merely managing to serve exoticism to the West.

The acting is Crazy Rich Asian‘s best asset. I especially appreciate how Golding and Gemma Chan (playing as Astrid Leong-Teo) can (code) switch from Queen’s English to an English accent and Cantonese, or the film’s highlight, the Mahjong Mandarin duel between Rachel and Nick’s mother, Eleanor Sung-Young. How do I know that they change languages? I had to look that up, too. 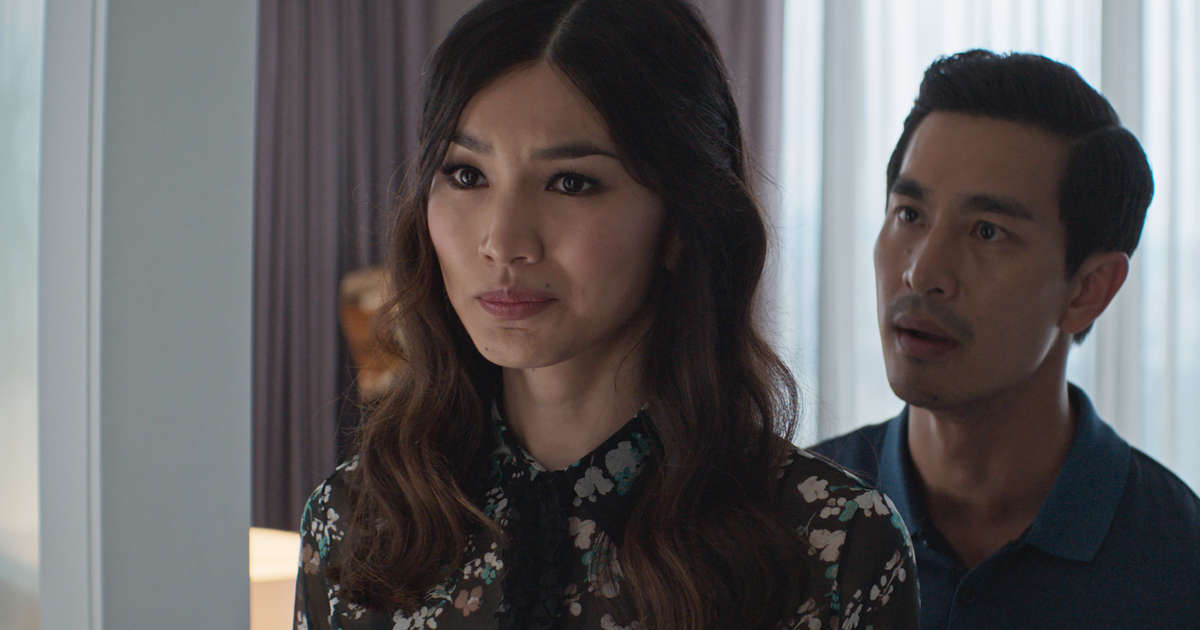 This movie needed more Astrid, and less of her with her knuckle-headed husband.

Unfortunately, though Crazy Rich Asians is a romcom, there is little romance, plenty of drama, and zero comedy. The film treats viewers to some love at the beginning and end as Shakespearean conventions of a comedy dictate. The main conflict resolves itself in a showdown that resembles a video game boss fight and reaches an unconvincing result. The sub-stories—namely Astrid’s—better satisfied me. 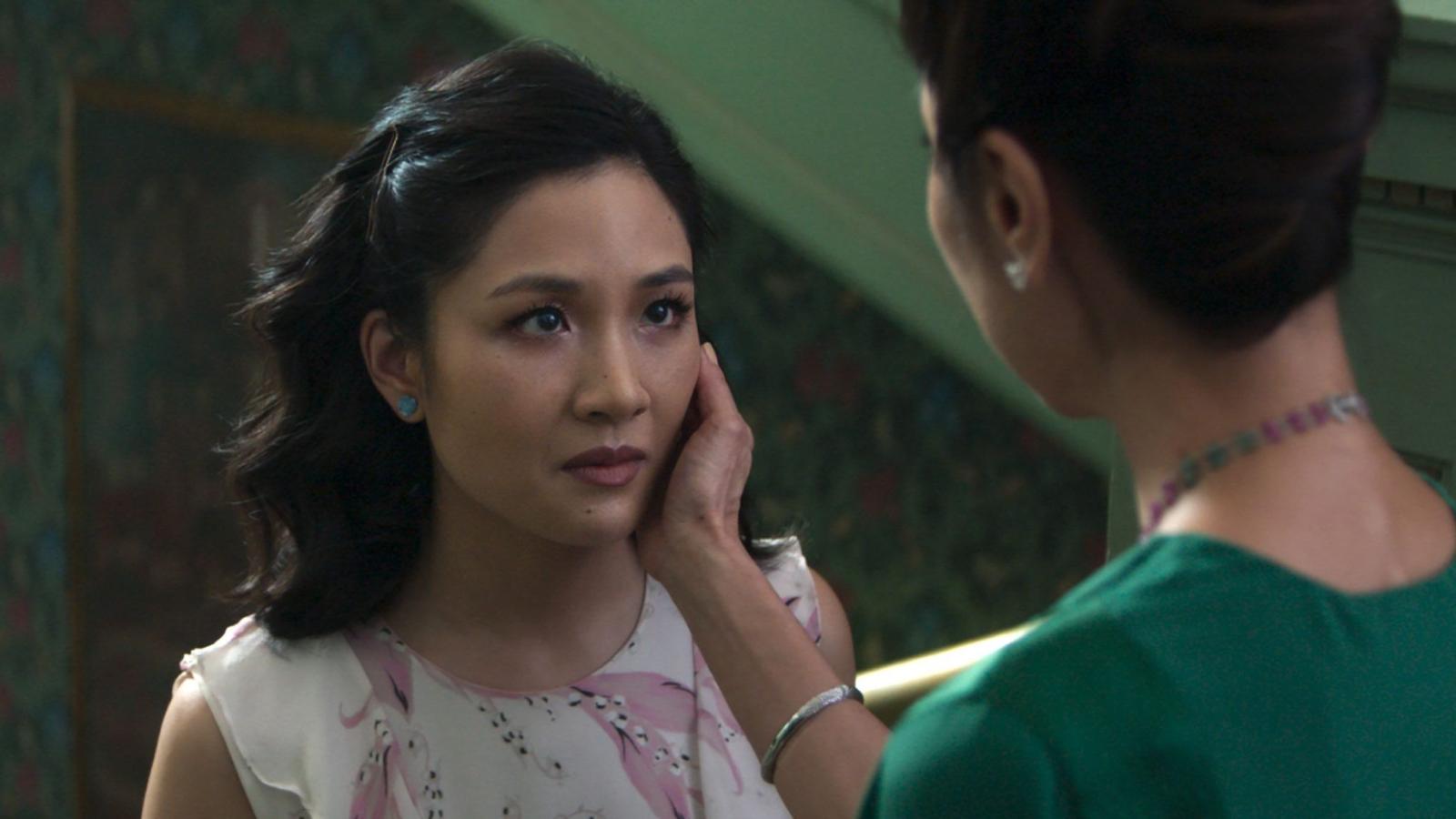 Eleanor gave Rachel the Asian equivalent of a good Southern “Bless your heart!”

Meanwhile, Ken Jeong and Awkwafina are terrible, and not even in a weird Tom Green kind of way, but in an annoying Rob Schneider way. I was expecting Awkwafina to put on her “Blaccent,” but instead, she sounds like…an Asian hillbilly? While I only had to tolerate Jeong for one dinner scene, Awkwafina is a lingering irritant. Was Tiffany Espensen not available for the role? Kara Want? Lily Ji? Instead, Jon Chu aimed for the biggest name among young Asian actresses and she kills it…and not the flattering way. 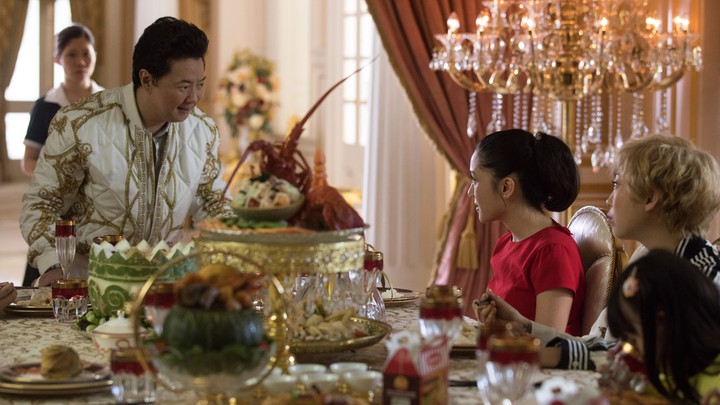 Crazy Rich Asians is a novel luxury that I wish was more common. While it is understandable that Asian audiences in the US flocked to see this film, contributing to its gross earnings of $230 million on a $30 million budget, I do not believe that the film goes as hard as it could have. Lingering in the shadows of this movie about Asians, made by Asians, for Asians, is respectability politics—model minorities who have won the Hunger Games of capitalism. After all, this film spawned a series of Crazy Rich Asians travel destination articles so viewers can try to drink Champagne on a beer budget. Maybe I should take Jacquelyn up on her offer and read Kwan’s novels, or just watch Joy Luck Club again instead.