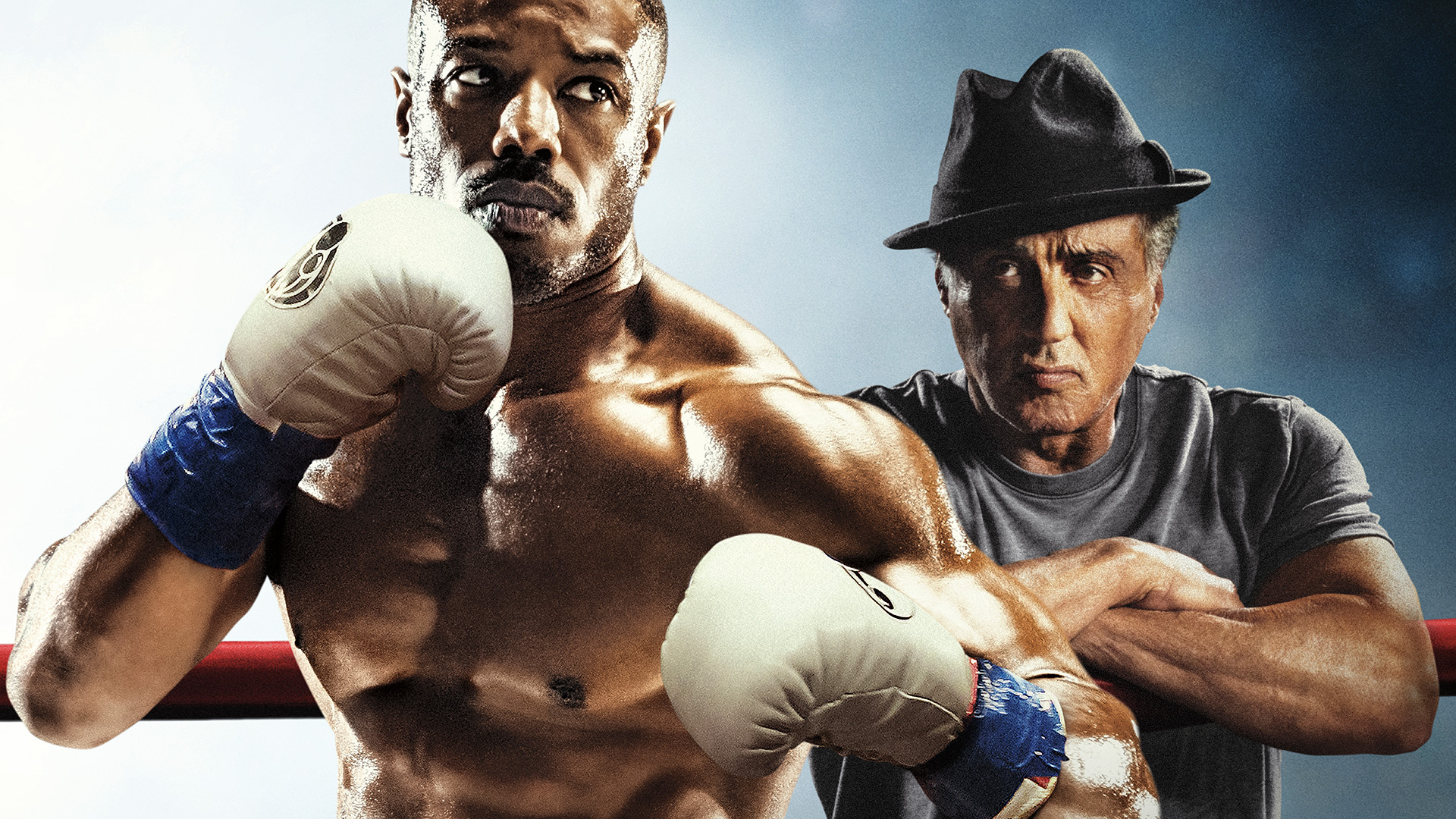 A lot of readers might click the “X” button after they find out that I am really not a Rocky fan. I might have seen the first two films in their entirety…maybe. Yet through the cultural capital of Americana, I found out about Mr. T. I have seen the clip of Ivan Drago and Tony “THROW THE D**N TOWEL!” Burton (or should I call him Evers?). I know that not a single person remembers what happens in Rocky V, and I did not even remember that 2006’s Rocky Balboa was a thing.

Given my disinterest in the the Rocky franchise, I have no idea why I rented Creed from Redbox. I enjoyed it, and for reasons most people do not even focus on. Reading the official Creed plot synopsis, or even our official review, I have to ctrl+F “Tessa Thompson” and she might not even be mentioned! Imagine reading about a Rocky movie that does not mention Adrian! Adonis “Donnie” Johnson-Creed is the illegitimate son of Apollo Creed, and I was very much interested in whether or not he would succumb to the sins of the father. Rather, in Creed II, the titular character is haunted by his father’s ghost, or his shadows, rather than his sins. 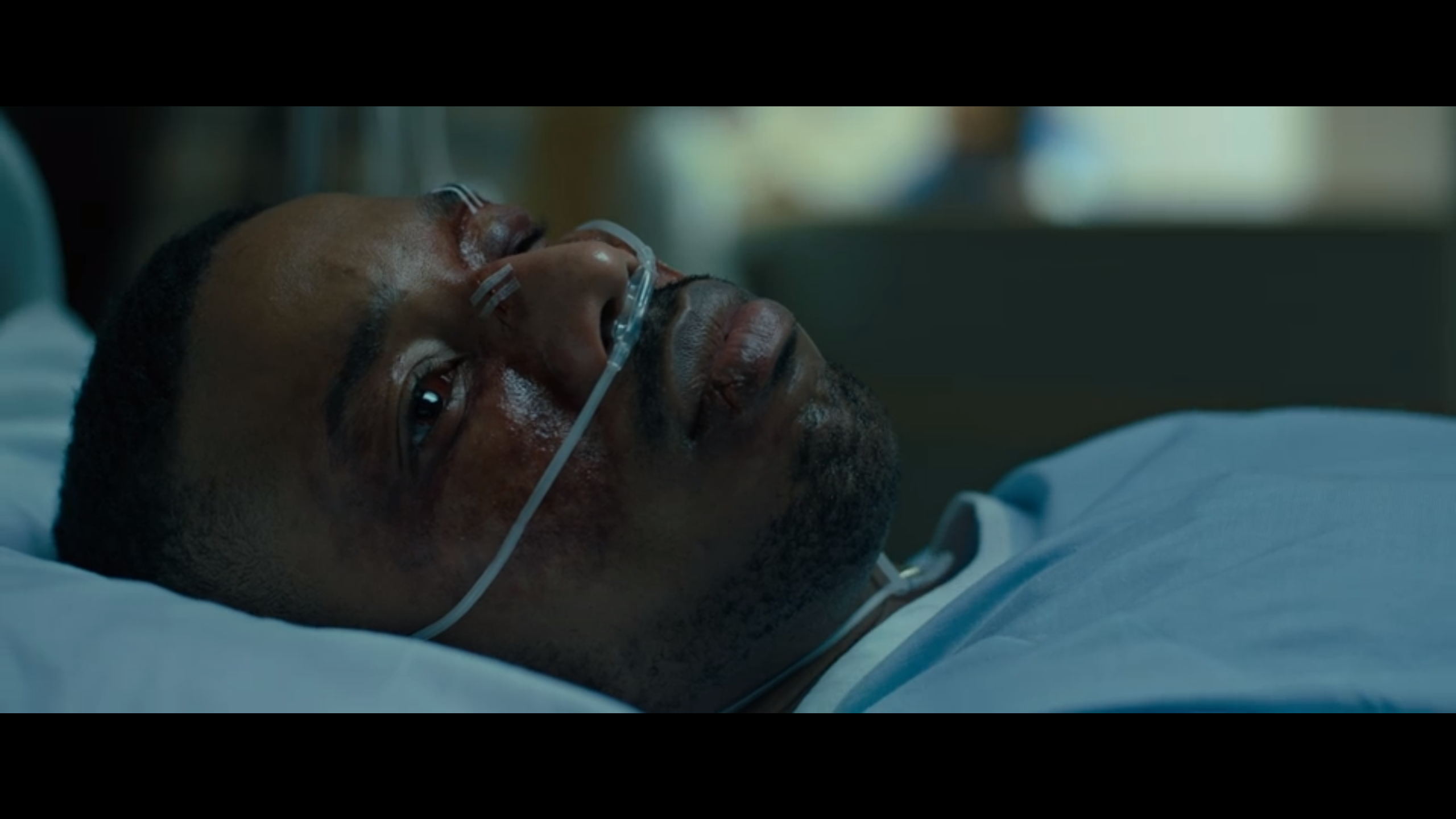 Creed II does not deviate from the original Creed in terms of content. Therefore, I would rather not try to invent the wheel here. The only key difference is that I would frame this film’s positive content in terms of how the love for family may surpass personal ambitions. Additionally, this franchise does not get enough credit for its inclusiveness. Check out this convivial reflection on how it represents those with disabilities. 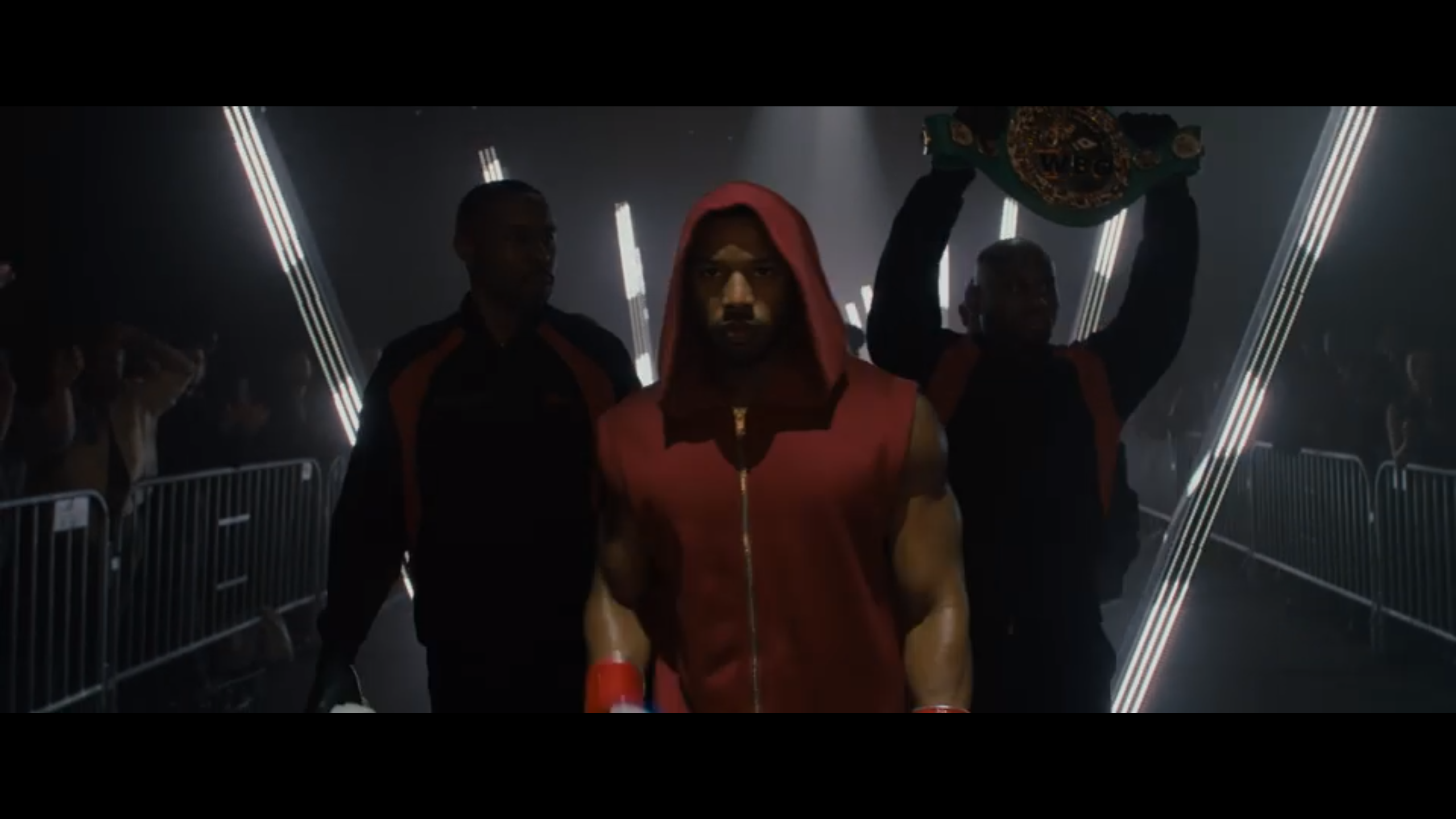 The Champ is Here!

In modern day Russia, an elderly man, a father, laments his past failures. He looks toward his son who is as much as an emotionally empty shell of a man as he is. With the last of what will he has left, the father passes down the knowledge and skills that he had accumulated before his sentence as an exile to his son—a massive, hulking, terrifyingly powerful man—who utilizes this inheritance from his father to get revenge.

The joke here is that American cinema always portrays Russia as a dark place where only hardened men (and the rare equally-hardened woman) reside. In truth, I am conducting an experiment here, having re-watched the opening for Iron Man 2, and describing it above. Because Russia as hell-on-earth is a multifaceted television trope, my introduction works for Creed II as well. Ivan Drago (Dolph Lundgren) wakes up his son, Viktor Drago (Florian “Big Nasty” Munteanu), who immediately eats a bowl of cereal afterward that probably has nails in it, and later knocks a man’s block off during an amateur fight as a demonstration that those nails were probably made of a lead and mercury composite, too. Director Steven Caple Jr. needs his audience to know that Victor is a real tough guy. I guess naming him “Sergey” would have been too much on the nose. 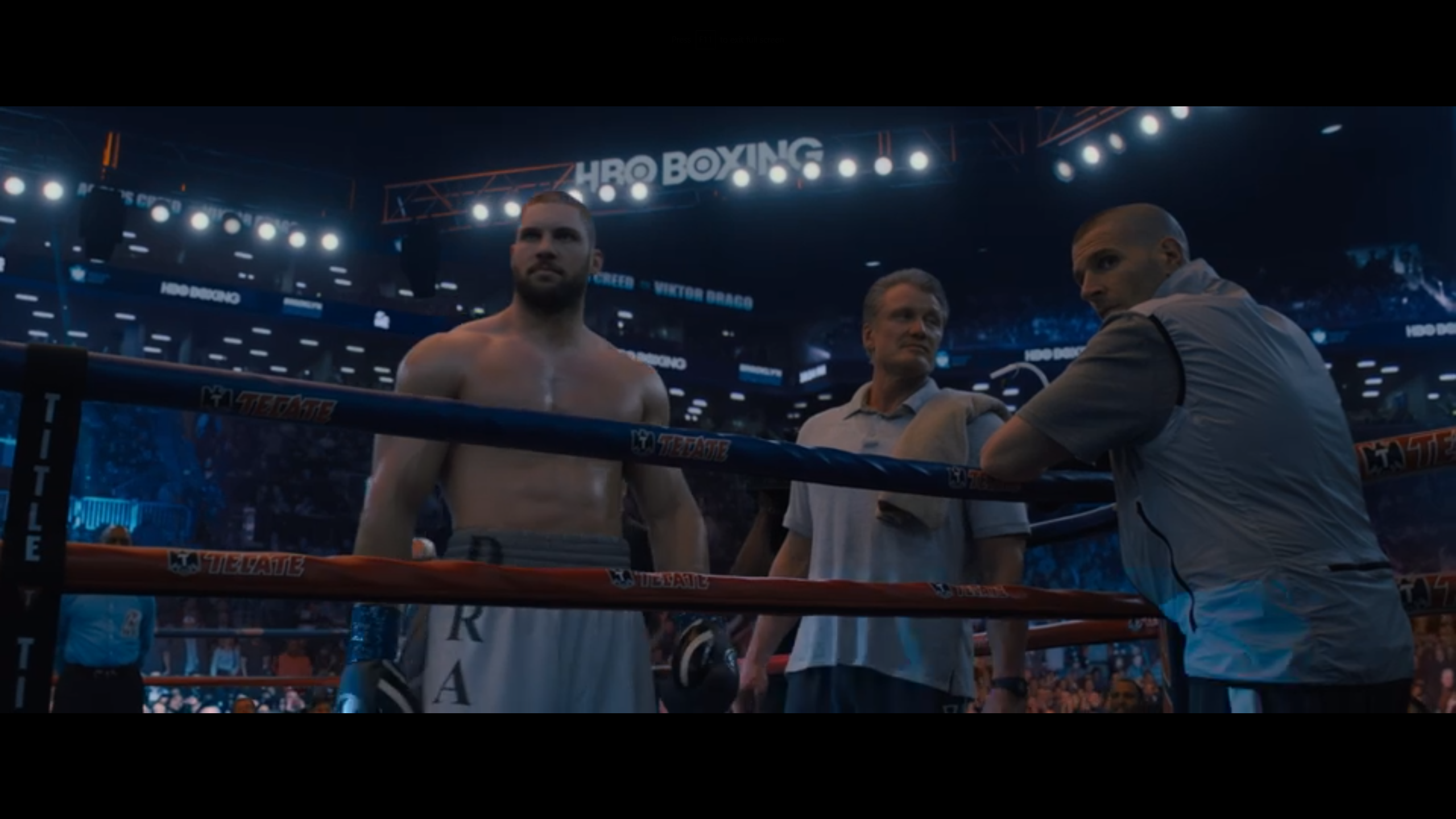 “Self Preservation! That’s good. At least you got that over your old man.”

Meanwhile in America, Adonis Creed wins back the mustang that he lost to Danny “Stuntman” Wheeler at the gym during the first movie. Oh, yeah, Creed wins the WBC World Heavyweight Championship belt even though he weighs maybe 185 lbs (for comparison, the current IRL WBC champ, Tyson Fury, weighs 240, so lol, Hollywood). He and his now-fiancee, Bianca (Tessa Thompson), celebrate his victory with a night out at town, their festivities interrupted when they see the Dragos and their promoter, Buddy Marcelle (Russell Hornsby), talking trash. Adonis accepts the challenge, believing that defeating the son of his father’s killer would bring him peace. 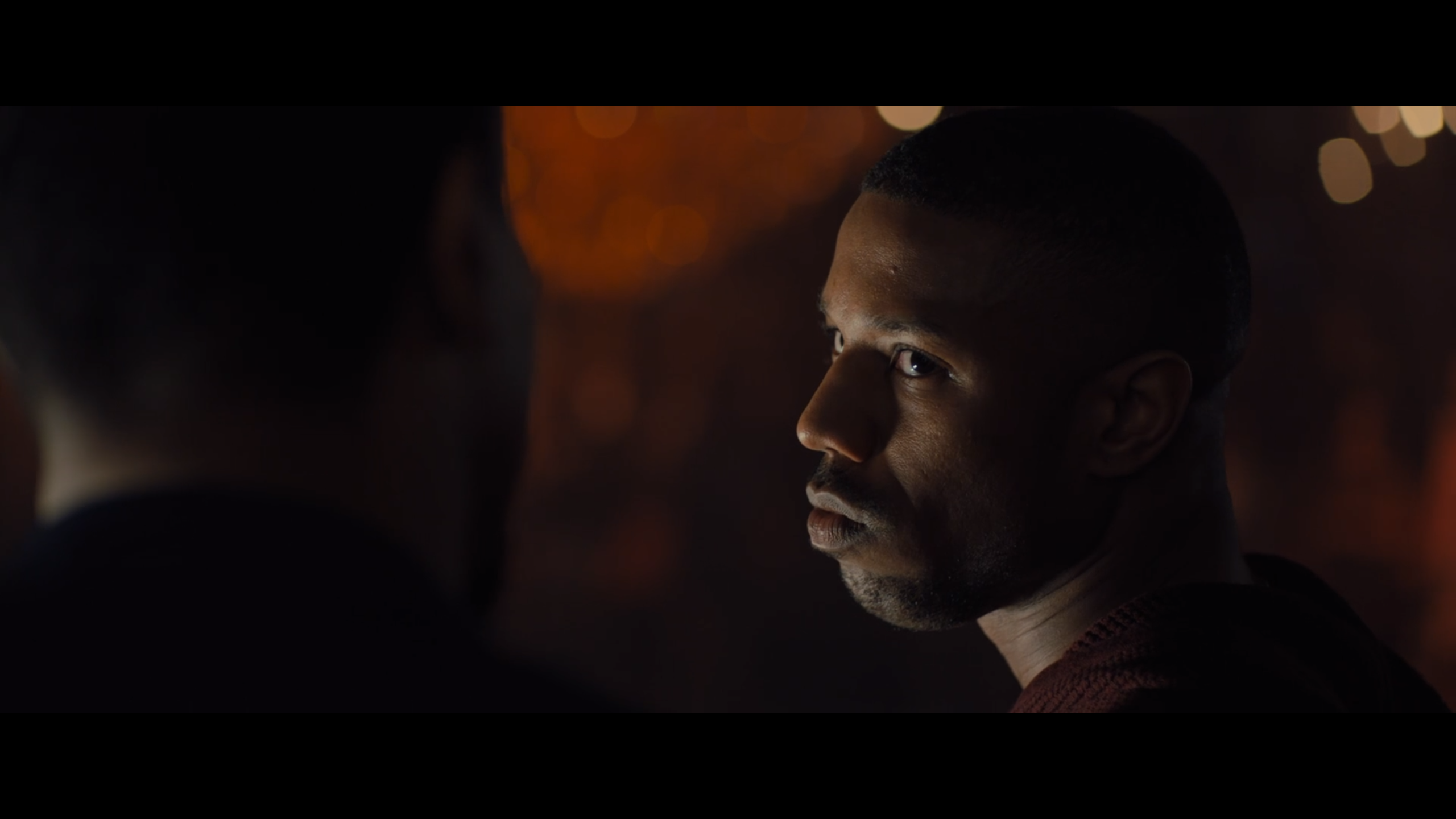 What you say ’bout my daddy?

Who do I mean by “him,” my reader may ask—Adonis or Apollo Creed? My answer is, “Yes.” Likewise, Rocky (Sylvester Stallone, of course) asks Adonis if he knows what he is fighting for, and I am unsure if Creed II ever satisfyingly answers this question. Viktor, with the singular-focus rearranging Adonis’ face, manages to do so in short order. 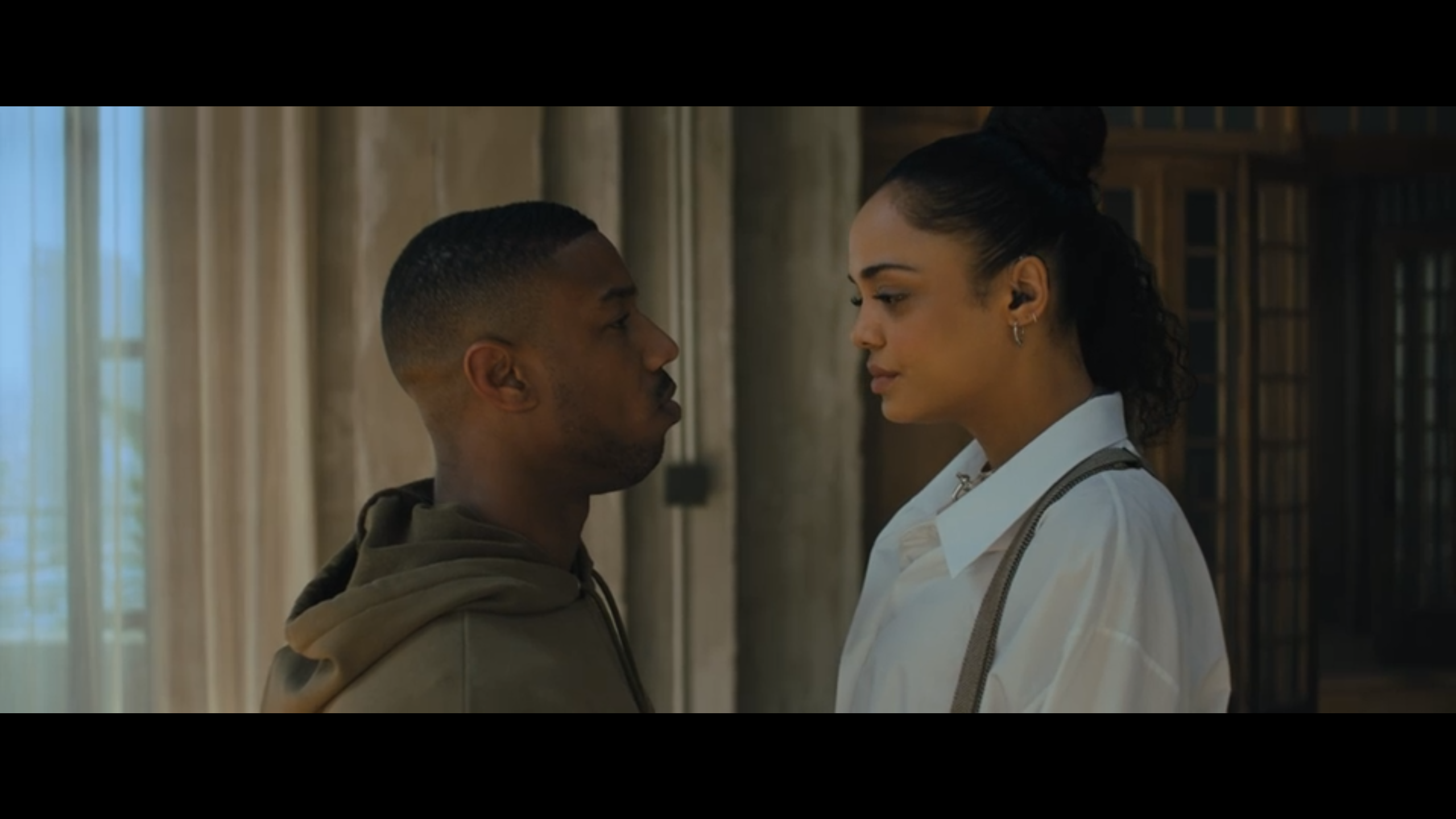 Can you feel the love?

Creed II is a sports/boxing movie that moves towards this fight so quickly I feel that despite the promotional materials there must be other layers of complexity beyond two men melodramatically pummeling each other in the face with consecutive punches, as the recipient of the assault does not even appear to be interested in raising his hands to protect himself from brain damage. Because if all this film has to offer is the hero falling so that he can get back up, then we have already seen that film every time a kung fu master tells his apprentice to open his mind, or when the ubiquitous sports coach in the West tells his pupil to open his mind. Specifically, Rocky already told instructed Adonis to shadow box with himself while facing the gym mirror in the previous movie!

Rocky in Creed (2015): “See this guy right here? This is your toughest opponent.”

Recall my grievance against critics who failed to highlight Adonis’ relationship with with Bianca (Tessa Thompson). Perhaps this neglect is due to the fact there are not enough people in prominent places who understand black love in movies like If Beale Street Could Talk, or The Photograph. What I love most about Creed is how Ryan Coogler handles the budding relationship between Adonis and Bianca, including how the latter’s progressive hearing loss does not hinder her from pursuing a career in music. Caple picks up this plot with aplomb, demonstrating that love really does conquer all. 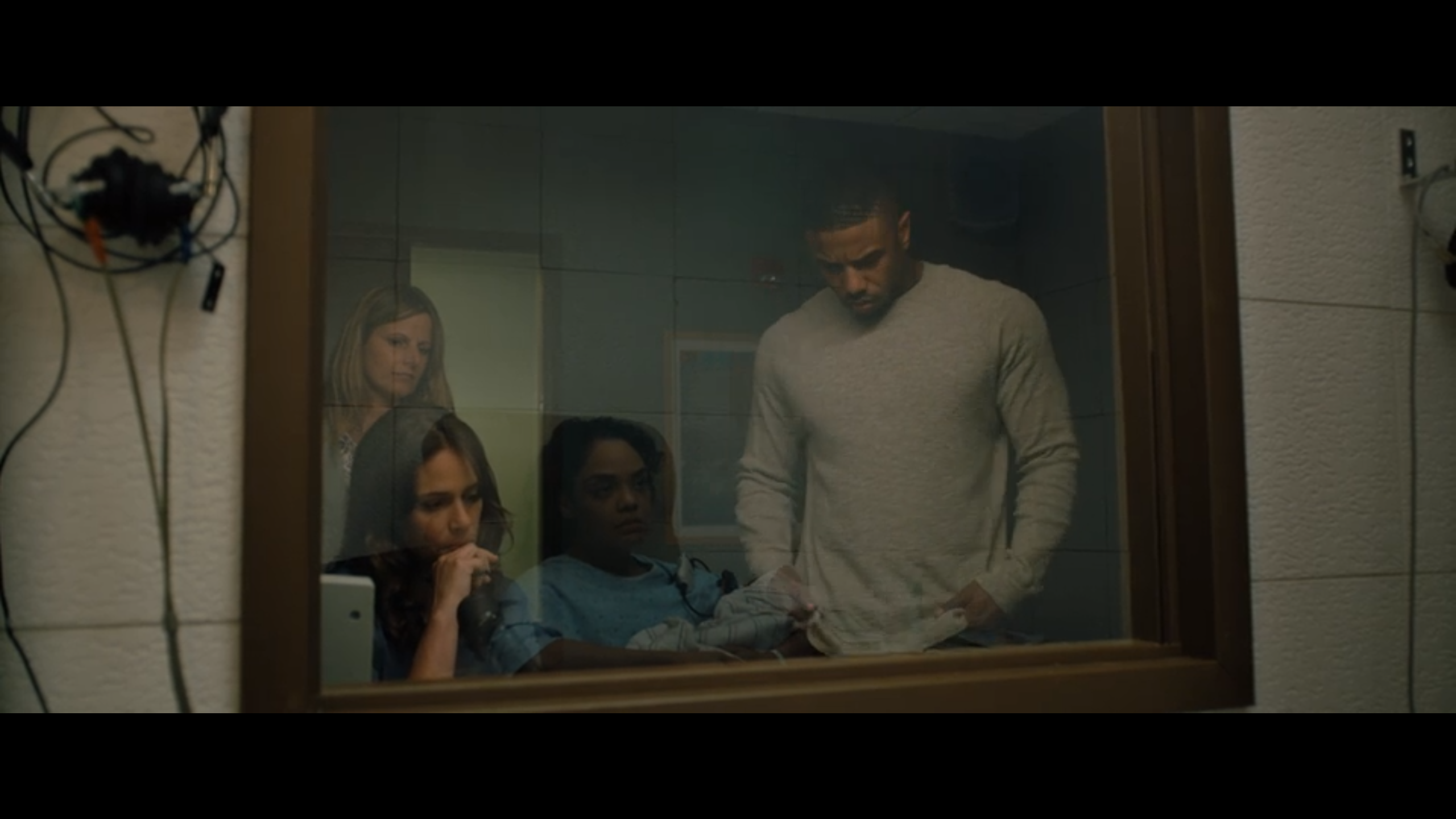 A place where no parent wants to be.

Caple would not have been able to pull it off had Michael B. Jordan and Tessa Thompson not maintained such effective chemistry. They are naturals for each other, and I cannot get enough mainstream portrayal of black love that is not riding the wheels off the struggle bus. Of course, Phylicia Rashad slays every role she has ever graced, egging on her stepson and now, stepdaughter’s reproductive interests as Mary Ann Creed. 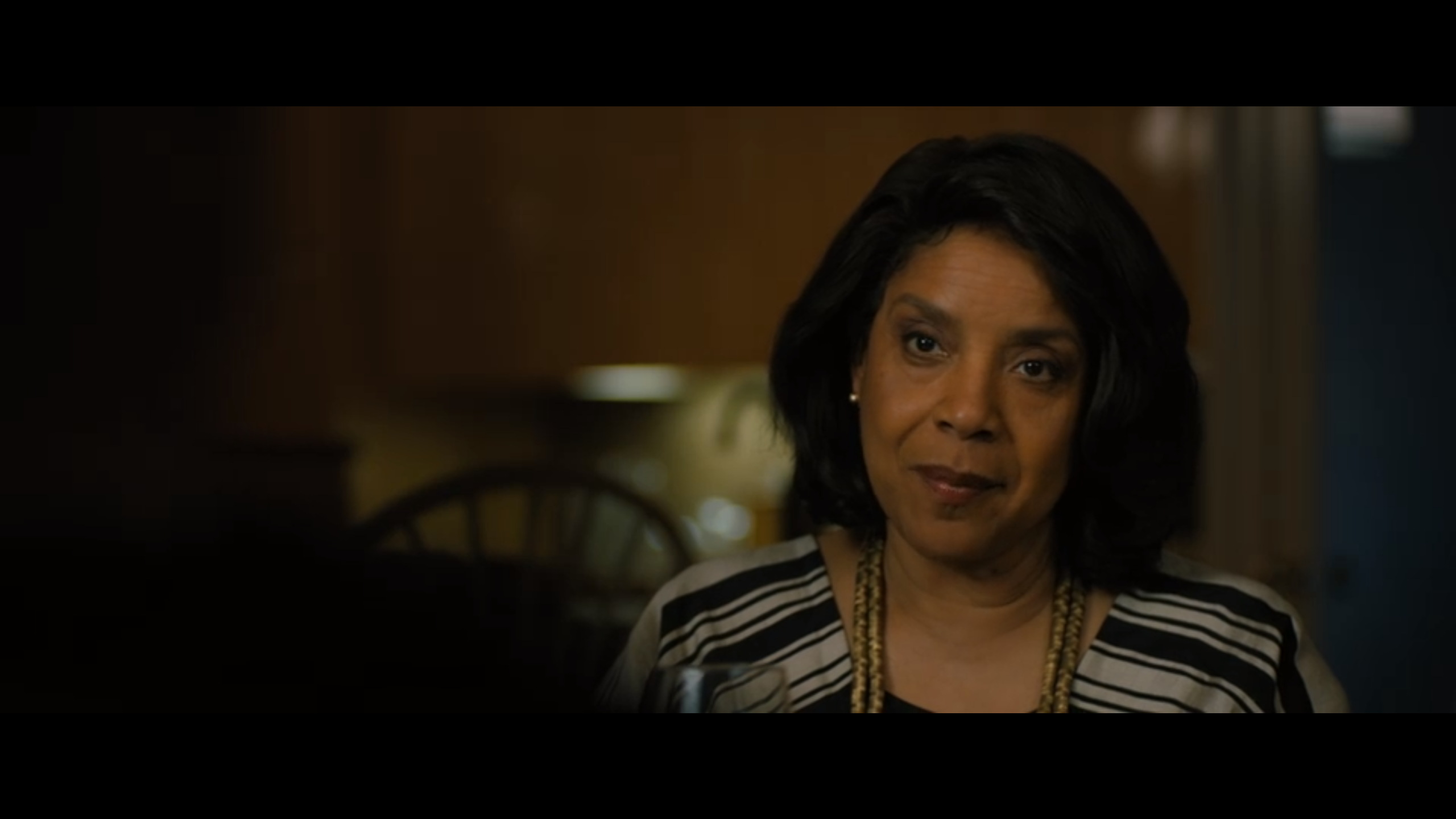 Look at that look. Can’t nobody fool momma. She knows best!

Creed II could have gone without providing Rocky another side-story, this time his confliction in regards to his estranged son. But I feel that Rocky’s path to redemption is actually a diversion; a misdirection from the film’s plot twist. All I will say is that even the enemy has feelings, too, and has learned from past mistakes. Alternatively, self-preservation prevails.

When you find out what happens when a man loves a woman, because sex ed classes were banned in school.

Hubris and an inability to move on from the past is the overall theme in Creed II, though a motif prevents the film’s ascension to distinction. As I have said previously, I feel like I have seen this plot elsewhere. The hero defying the sound advice of his friends and family before getting butt-busted? Seen that before, too. The champion being unable to triumph without concession without the assistance of his “uncle”? Straight up trope. Stories about father (figures) loving their sons? I cannot get enough of that. I need more! 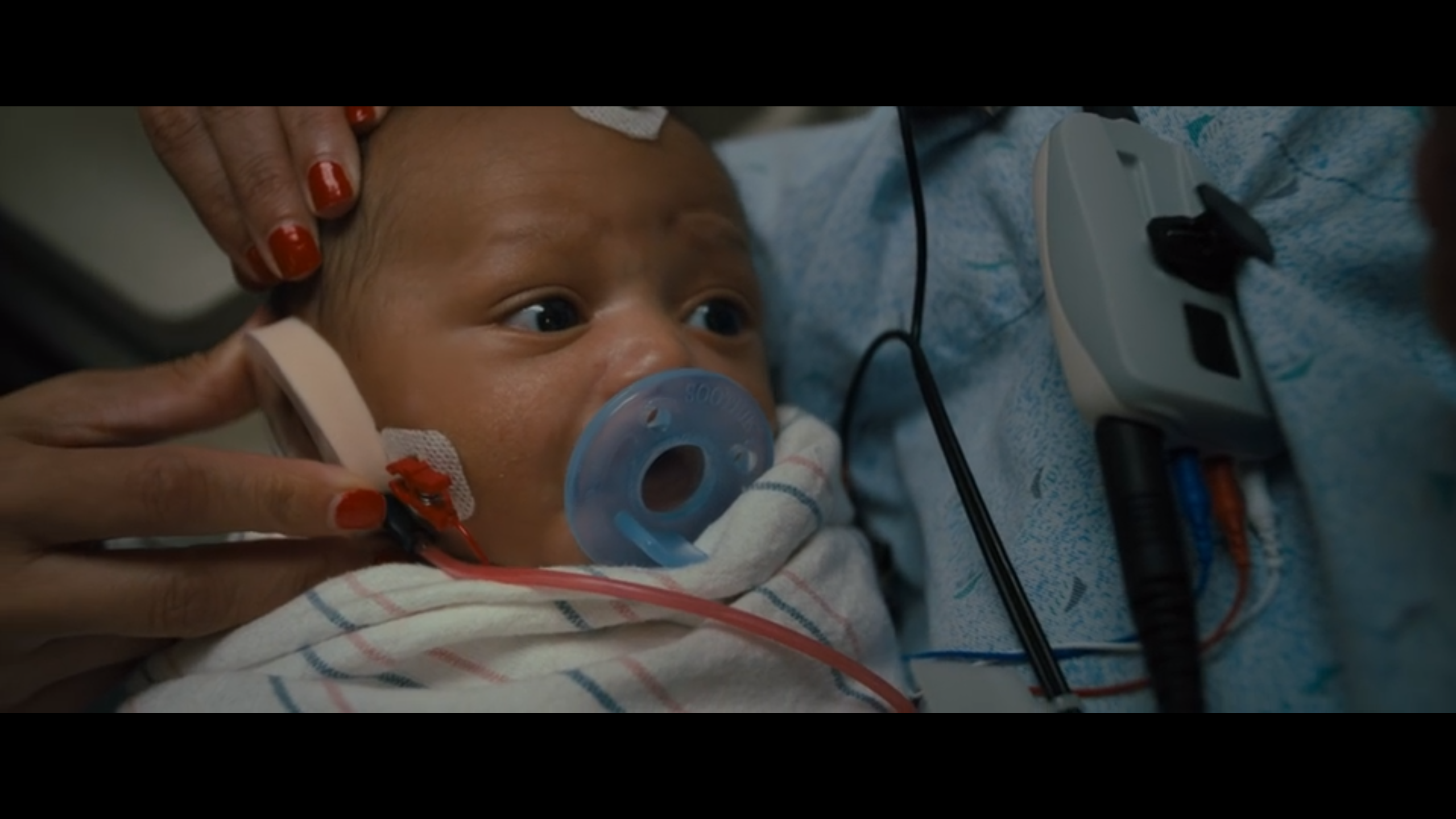 - Generic Russian badguy trope
- Does Stallone play as Rocky, or is Rocky Stallone as a regular guy?
- Can a man really take an infinite number of shots from a professional boxer without dying or the ref stopping the fight?

Creed II is serviceable as a sports movie sequel, though its best moments happen when the gloves are off.