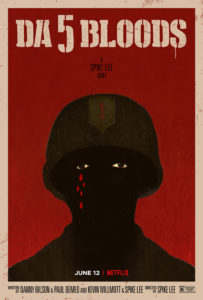 Spike Lee earned a lot of attention in 2018 for his Jordan Peele produced comedy, BlacKkKlansman. Just two years later, he’s back with another film for Netflix. This action-heavy war drama explores the consequences and injustices of the Vietnam War by telling the story of a squad of black soldiers returning to Vietnam as old men looking for lost treasure. Naturally, any followup to a film like his previous movie is going to be eye-catching but does it live up to the hype?

Violence/Scary Images: Some extreme gore; violent deaths where people are shot and blown up, a skeleton is depicted and a snake’s head is cut off.
Language/Crude Humor: Extreme language throughout including f***, s*** and some racial slurs.
Drug/Alcohol References: Casual smoking and drinking.
Sexual Content: Some non-sexual nudity is depicted. A subplot concerns the relationship of a black soldier and a Vietnamese prostitute—nothing is depicted.
Spiritual Content: Several of the characters are implicitly religious. A man starts preaching about Jesus before he’s killed.
Other Negative Content: Dark themes of alienation, trauma and regret as well as extreme violence and content.
Positive Content: Themes of friendship, loyalty, justice and family. 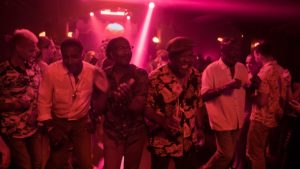 Whenever I watch a Spike Lee film, I get the sense that he directs movies the way Charles Foster Kane manages newspapers. “I don’t know how to run a newspaper, I just try everything I can think of!” I don’t mean that to be snide or suggest Spike Lee doesn’t know what he’s doing. He’s by all accounts one of the greatest living filmmakers. I just mean to say his work can be quite experimental. His filmmaking philosophy is everything-and-the-kitchen-sink. He makes tons of weird experimental dramas and adaptations that go all-in on digressions, tangents, distracting editing cues, fitting strange objects and pieces of artwork in the frame and cutting to random movies or objects to emphasize a point.

Maybe no film is a better example of this than Chi-Raq, where he adapted the ancient Greek comedy Lysistrata, about women committing to a sex-strike to end a war, into a modern-day morality play about how toxic masculinity is contributing to problems in inner-city black communities like Chicago’s south side. It wasn’t a terribly good movie but you can definitely see Spike Lee’s vision and the message he wants to discuss loud and clear. He wants his audience to mull over the connection between sex and violence and how communities with heightened occurrences of criminality need to address male violence before social reforms can make a difference. 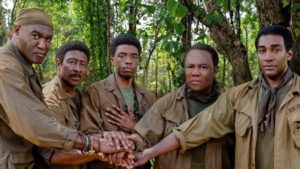 Following the immense success of his critically acclaimed, Oscar-winning comedy BlacKkKlansman, his newest film for Netflix has certainly earned a lot of eyes in its direction. Da 5 Bloods is a movie that feels like a very natural extension of his voice and the kinds of stories he likes to tell. It’s a Vietnam War movie. I get the sense the movie is something of a reversion to Spike Lee’s experimental tendencies. BlacKkKlansman was produced by Jordan Peele and I imagine his influence helped focus the project into something more traditional and sellable to traditional movie-going audiences. Without that focus, Spike Lee’s recent movies have been rambling and inconsistent and I was afraid going into this that it would be a massive step back for him as a director.

My concerns weren’t relieved when the film started with a slide show contrasting black activists and speeches in the 1970s with images of American war crimes during the Vietnam war. Spike Lee movies at their weakest are mere lists punctuated by moments of brutality. My concerns however cleared as the film’s prologue gave way to its introduction of the five lead characters. Set in modern-day Vietnam, five black veterans are shown reuniting for the first time in years. During the war, the group discovered a case full of gold and decided to hide it from the army and come back for it later. Now as older men, they believe they’ve found the place they hid it before and make an excursion into the jungle to retrieve the treasure they believe is rightfully theirs. 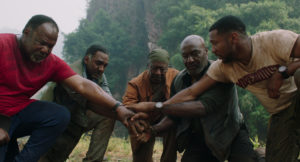 Da 5 Bloods is a movie that wears its influences on its sleeve. Its music and dialogue call attention to numerous Vietnam movies that came before it, including Apocalypse Now and Rambo. Given its topicality, it’s strange to think this is Lee’s first delve into the topic of the Vietnam War before now. That said, it’s a natural fit for him. The dialogue is exactly as tangental and excessive as I expected. Brief tangents are dedicated to every topic from the mistreatment of black soldiers in the war to the effects of growing up half-black/half-Asian in post-war Vietnam, to slavery reparations, to the sins of the Founding Fathers, to North Vietnam’s attempts during the war to radicalize black soldiers, and for good measure, numerous references to President Donald Trump. At one point, one of the characters even has a soliloquy directly into the camera.

The movie has a lot on its mind and doesn’t hold back what it thinks. It has a long list of injustices and cruelties it wants to expose. The digressions almost feel like the point Spike Lee is going for. He’s trying to lay out the laundry list of anti-black and anti-Vietnamese human rights violations to fully explain the motivations of his characters. They aren’t just going back to Vietnam for personal wealth. They’re going back to get something they believe is owed to them by the culture that oppressed and sent them off to die in a pointless war. Like I said though, Spike Lee movies I’ve seen feel at their weakest when they’re lists and soliloquies. 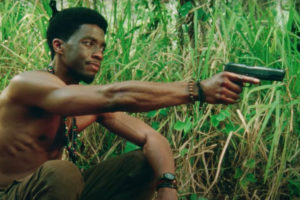 Of course, the genre of a treasure-hunting story dictates the mission of a film like this isn’t going to go as expected. There wouldn’t be a story if everything went according to plan and everyone got along. Anyone who has seen a film like The Treasure of the Sierra Madre knows that narratives like this aren’t unironic stories of men going on journeys for gold only to succeed plentifully. The long march into the jungle is a delve into the soul as well. The five members of the Bloods are naturally beset by moments of personal conflict, tragedy and post-traumatic stress as they relieve their horrific experiences in the jungle and work through their guilt and regrets. They’re also confronted by a group of violent Vietnamese gunmen who are implicitly former Vietcong who also want to find the same treasure. Their allegiances prove to be more complicated though.

Da 5 Bloods is a messy and somewhat pretentious work of art with a lot of tangents, digressions and rants. I would never say a Spike Lee film is inauthentic though and he certainly fills the space with interesting ideas and melancholy characters. The Vietnam War was one of the most traumatic and regretful wars of the last century and you can see the weight of that loss that Spike Lee was attracted to in approaching the material. He wanted to explore the myriad of ways that black soldiers could never fully come home again and what it means when they do come home to a country they fear hates them. To paraphrase Jacob Knight, it’s one part Ted-Talk and another part Cannon action film and there’s certainly an audience for that sort of hodgepodge of a movie.

Da 5 Bloods is a movie for fans of Spike Lee. I can't imagine recommending it to many people in place of his stronger films like Do The Right Thing or Malcolm X but it's certainly a lot better than Chi-Raq! This is as much a quintessential Spike Lee film as you'll find with long digressions of black social commentary, dark humor and brutal violence. You probably already know if you ought to watch it based on that description!