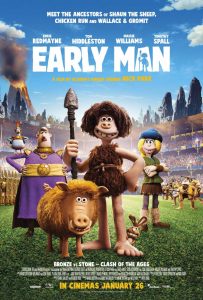 It seems rather trivial to even talk about any other movie this month, especially stop-motion animated family fare imported to us from the other side of the Atlantic. Oh well, a critic’s gotta crit, and the British gotta Brit, so let’s do this.

Violence/Scary Images: An ominous-sounding score opens the film. Bronze Age characters demolish the Stone Age community’s buildings/homes and trample over everything. Lots of physical comedy (characters getting hit with the ball, falling, tripping, getting mildly hurt) and sight gags. The Bronze Age army/security forces pursue the Stone Agers but don’t kill them. A tied-up rabbit looks like it should be roasting but always manages to escape being fully captured/eaten.

Sexual Content: Characters from the Stone Age wear minimal clothes, but it’s not sexual. A Stone Age woman makes remarks about a Bronze Age soccer player’s manliness. A man unintentionally kisses a hog instead of a woman. Near nakedness in scenes involving a bath (again, not sexual).

Positive Content: Promotes the importance of teamwork, both on and off the field. As Goona explains to the Stone Agers, a team that works together for the love of the game will always have more heart than a roster full of show-offs who are only out to score for personal glory. The movie also celebrates girls/women who want to play sports, and of course, the sport of soccer (outside of the US known as “football”) itself is literally deified in the story. Other themes include perseverance and communication.

Plenty of role models, beginning with Dug, who’s determined to get his people back into their valley and out of the badlands. He works tirelessly to learn the rules of the game of soccer, help teach his community, and stand up to the Bronze Age bullies led by Lord Nooth. Goona is willing to help and even coach the Stone Age team. Chief is a kindhearted, if overly cautious, leader of the Stone Age crew. 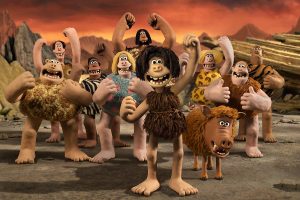 Aardman Studios is one of those names you’ve probably never heard explicitly, but I can guarantee you’ve seen their work before, kinda like Sally Cruikshank (trust me: you’ve seen her work before). Having done several commercials and animated shorts primarily over the course of the 80s and 90s, their unique brand of stop-motion animated dry comedy came to significant prominence with their Wallace and Gromit shorts, some of which won Academy Awards. Their first venture into feature filmmaking came in the form of 2000’s Chicken Run, and they solidified themselves in animation history with 2005’s Curse of the Were-Rabbit, which was a major critical and commercial success, winning the Academy Award for Best Animated Feature. By the by, if you’re reading this, Aardman, please make another Wallace and Gromit movie. I really could use one.

In fact, it’s rather baffling that Aardman is still around even today carrying on business as usual like this. With many of the old giants of traditional animation dropping left and right, it does my heart a solid to see one of them still going strong, even if the outings don’t necessarily leave me satisfied. Aardman’s last release of Shaun the Sheep, a Wallace and Gromit spin-off, was well-loved by many, but somehow I just couldn’t get into it. 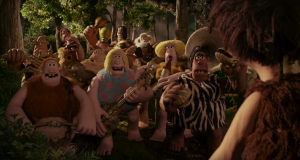 With all that said, the appearance of Early Man lumbering somewhere underneath the labyrinthine tendrils of the Black Panther hype gave me a reason to raise my eyebrows above sea-level and sashay my happy self out of my townhouse to the nearest cinema for a feature-length frolic through stop-motion mania. How did it deliver? Well, it’s no Curse of the Were-Rabbit, but that’s like saying Orson Welles never did anything as good as Citizen Kane after finishing Citizen Kane. At the very least, Early Man will be a very familiar meal with its style of humor and set-up, being at bottom a sports comedy story hiding in the trappings of a caveman comedy.

We are first introduced Ray Harryhausen-style to end the age of the dinosaurs brought about by a meteor strike near present-day Manchester around lunchtime. The meteor strike inexplicably leaves the homo-sapiens nearby with nary a scratch on them and they investigate the ground zero. The cave folk examine the meteor in a way that initially looks like the first game of hot potato and soon transforms into the invention of the sport that modern folks of a European persuasion like to call “football.” 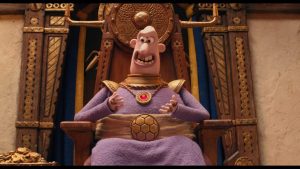 Time passes, and the crater left by the meteor has become a thriving valley lush with vegetation and game. The animal skin-clad denizens of the valley spend time by hunting rabbits in haphazard fashion. When not doing that, they spend their days playing out visual gags you’ve seen countless times in episodes of The Flintstones, with animals and insects being used as substitutes for modern household amenities like electric shavers and clothespins.

As things go, there is one young bright-eyed herald of progress by the name of Dug (Eddie Redmayne) who wishes for more than this provincial life of hunting rabbits, instead suggesting that they hunt something bigger, like mammoths. The film never carries on that expectation, and I was kind of disappointed by that at first. However, I realize that was reflective of my own failure to remember what kind of studio Aardman is. The most complete caveman experience I’ve ever had came in the form of Far Cry: Primal, and that still hasn’t left me it seems.

Instead of an epic showdown with wooly behemoths, Dug and his ragtag band of villagers have their home invaded by a brigade of bronze-armored mammoths commanded by one Lord Nooth (Tom Hiddleston sporting a forced Franco-German accent).  Nooth seizes the valley and forces Dug and his folks out into the surrounding badlands, ushering in the Age of Bronze. Dug is not one to take this sitting down, and plans an infiltration into Nooth’s fortress, eventually being shoveled into a rousing game of football with nothing to take back to his people but confusion and bewilderment. 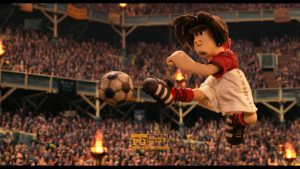 The plot that unfolds from here on is fairly straightforward. In a moment of brazen and foolhardy resolve, Dug challenges Lord Nooth’s elite team of football players to a game for the rights to the valley. Foolhardy since his people have no clue as to the first thing about football, and now must fight for their home by it. There are groan-worthy visual puns and gags aplenty that might keep some of the younger crowd preoccupied for a time.

There were two especially delightful bits, one with a duck and another with a messenger pigeon, that I won’t spoil here. Game of Thrones’ Maisie Williams comes in as an aspiring football starlet named Goona who helps to whip Dug’s tribe into shape for the big game while pursuing her own athletic dreams in the process. The humor is remarkably dated even though it is very well-executed, making callbacks to the antics of Buster Keaton, Charlie Chaplin, and other giants of the silent comedy era. Everyone involved seemed to be having fun with what was being done here. 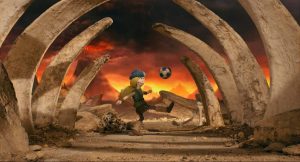 Probably the most thematically intriguing element that I found explored here was a reveal that really didn’t work so well as a reveal coming close to the final act that touched upon topics such as historical revisionism and social shaming that would have made for a fine talking point. I found a similar undercurrent in Disney’s Moana. Sadly, this element in Early Man was curtailed with a number of puns, gags, and jokes surrounding British football culture that I found all but impossible to resonate with.

Early Man is not a bad film by any stretch. It just seems like the weaker version of what this studio and director Nick Park are capable of doing. Much like Shaun the Sheep, the timing of the release is incredibly poor, but it may find some resonance among family viewers trying to cool off from the Black Panther craze. If so, have fun. I’m gonna go see if Curse of the Were-Rabbit is available for purchase somewhere. 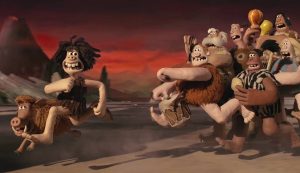 - Cultural barriers - Dry - Comedy will not connect to all

I’m sure this will find its fanbase once it gets on Netflix in about a year or so.