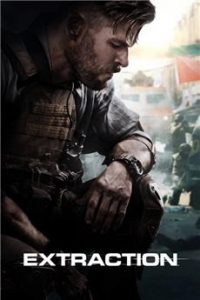 Netflix releases new films every week but more often than not they end up in the dustbin of history. Their newest action film starring Chris Hemsworth, which premiered this weekend, has caught some additional attention for its excellent stunt-work and its association with some of the largest names in the modern film industry!

What might’ve been just another action movie released quietly on Netflix this past weekend, and might’ve slipped by most people unnoticed and joined the ranks of dozens of other mid-tier action movies in the site’s backlog, had it not been for a small bi-line in the film’s promotion: “Written and produced by Joe Russo”.

Fresh off of Avengers: Endgame, the Russo Brother’s put their names behind this relatively unassuming project and gave it an injection of attention in addition to bringing along Chris Hemsworth to be the film’s lead. If anything, the film feels something like a favor for director Sam Hargrave. He previously worked as the stunt coordinator for Captain America: Civil War and Avengers: Endgame, and you see that reflected in the final product.

Extraction is a very well produced action film. Much like the first John Wick, you can definitely tell the creative team specializes in action choreography and heavy stunt work. In those elements, the movie absolutely shines! This is easily the best action filmmaking we’ve seen thus far in 2020. Unlike the first in the John Wick trilogy, I wouldn’t call this an instant classic though. The weird thing about the film is that it actually works a lot better as a stripped down minimalist action movie before the actual attempt at storytelling starts kicking in. 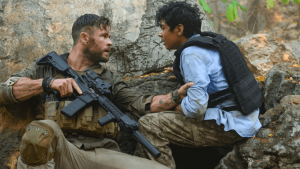 The setup is pretty lean. A drug lord from Bangladesh has kidnapped the son of another drug lord, named Saju, and he’s being held hostage. Enter Tyler Rake, an ex-Australian special forces operator and current mercenary, who is hired to break into the drug lord’s compound singlehandedly and extract him. Immediately the extraction is thrown under the bus when one of Saju’s father’s henchmen arrives and sends Rake on a chase through the streets of Dhaka as he’s pursued by both factions as well as the local police who are bought off by the drug lord.

The setup is perfect for a relentless non-stop action chase with simple stakes and immediate consequences. Chris Hemsworth as Tyler Rake is an immediately imposing and nigh unstoppable engine of destruction who has almost no difficulty disposing of large numbers of combatants at once. The first half of Extraction is awesome! The setting of Dhaka is so intensely intimate and claustrophobic that the movie manages to build drama and suspense by applying immense pressure to this character and forcing him to be constantly on edge for long periods of time.

The movie’s best set piece comes during this time when we get an imitation of a ten minute tracking shot that follows Rake and Saju on an intense car chase through the streets as they dodge police and other combatants while desperately try to avoid hitting any of the hundreds of people lining the sidewalk. It’s one of the most impressive action set pieces I’ve seen in a while and it makes you wonder how the filmmakers were able to achieve the shot without anyone getting killed (although the shot is clearly hiding a few hidden cuts). 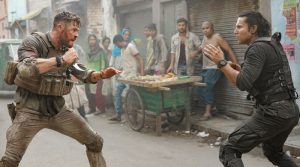 Once Rake and Saju start hiding out in a safe house with David Harbour, the movie begins losing steam. There’s nothing wrong with a movie taking a breather after such a long series of action beats, but the movie throws in a lot of dumb, unnecessary characterization in this part for no reason. Apparently Rake was an absent father figure to a child who died of leukemia. His wife also left, and the loss is clearly haunting him. The film seems to be implying that there’s some additional gravity to Rake, as a kind of surrogate father figure saving Saju, which the narrative carries for the rest of its runtime.

This element felt really superfluous and made the film lose steam. While the final action set pieces are fine, the added weight doesn’t really make them better. The movie felt a great deal more lean and efficient when Rake was just doing his job as a mercenary, and the tension just came from watching these two characters flee for their lives under such intense conditions. A stripped down 90 minute cut of the film without the added exposition would’ve worked in the film’s favor.

I can’t really complain though. Extraction is the perfect kind of pretty-good action film that plays really well on a streaming service like Netflix. Considering the extreme movie draught that’s overtaken the public since last month, this is definitely a breath of fresh air in a blockbuster season that’s going to be continuously delayed at least two more months by current events. On its own terms, Extraction is solid water-cooler discussion fodder and a really fun, if extremely violent, action film.

Extraction is a distraction, but it's a fun distraction! It almost manages to become one of the leanest action films in years but fumbles the landing. Thankfully, the ride is an enthralling and intense one while it lasts.