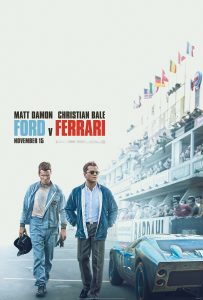 Coming off 2017’s excellent X-Men film Logan, director James Mangold is back in the director’s seat with one of the most anticipated fall releases of 2019. Taking us back to the mid-1960’s, the director tells a story of two passionate race car drivers with a passion for driving who are given a chance to put Ford Motor Vehicles on the map as one of the greatest car manufacturers in the world. Cutting through red tape, these two men strive to build a race car capable of winning against Ferrari at the 1966 Le Mans in France. 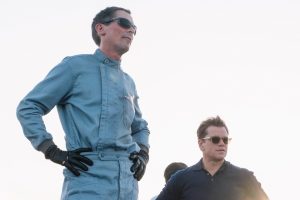 There’s an important scene early in Ford v. Ferrari that defines the movie’s central ideas. Carroll Shelby (Matt Damon) stands on a pedestal and proclaims there’s a rare sort of person in life who is born to do one thing that he’ll go mad if he can’t do, and that he’s one of two people meant to do it. He looks at his friend Ken Miles (Christian Bale) in the audience as though he’s going to speak his name, and then turns to Henry Ford’s son and says it’s him.

This scene captures much of the best aspects of Ford v. Ferrari. It’s a biopic about obsessive, working class drivers and mechanics whose one goal in life is to do the job they love and do it unimpeded because they’re the best at what they do. This moment sets up a lot of the movie’s drama. It’s a three way drama between Shelby, Miles, and the executives at Ford motor vehicles as they go about trying to make names for themselves. These men all want the same thing: To be the best. The problem is they’re all impeded by their own egocentrism, methods, and agendas to the point where the one path that will allow them to succeed isn’t obvious to them. 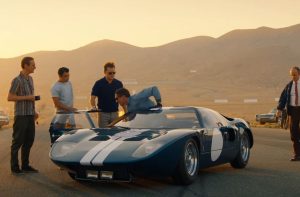 The movie is based on real life events. Set against the mid-1960’s, Ford has hit a massive sales slump as their clean-cut image has stopped selling in the age of James Bond and Playboy. In at attempt to salvage, the big wigs conceive of an idea to challenge the title of Ferrari as the world’s most desired and powerful car by opening a racing division to put their names back on the market. To do so, they bring in former racer and designer Carroll Shelby, the only American ever to win at Le Mans in France, and a “beatnik” but extremely talented British driver named Ken Miles who is likely the only driver capable of winning the race.

Personally, I don’t know anything about cars. I drive a Chevy Silverado because it didn’t cost me much and I enjoy lording over passers by with a car that says crash-into-me-and-I’m-not-the-one-that’s-gonna-die. Beyond that, I barely remember to wash my car let alone put much thought into how it works. As such, I don’t go into a “car” movie with any adoration towards that part of it. What makes Ford v. Ferrari work as a work of drama is the universality of its characters and their drive to prove themselves, maintain their pride and dignity, and attain their innermost needs. In that sense, the movie is a fairly masculine film with a borderline objectivist view on personal success. Ironically, it’s also a deeply populist working class film that loathes the idea of corporate groupthink and design by committee. This movie is a celebration of the lowlifes and grease monkeys who get stuff done more than the corporations with their names on the poster. 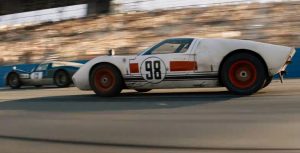 That core tension drives the movie’s mostly excellent script. The movie comes to us from James Mangold, the director of Logan, 3:10 to Yuma, and Walk the Line. While he didn’t write the script, he brings his unique edge and solid visual storytelling to this story with panache. Obviously, any film from the director of the best contemporary studio films of the past half decade is going to warrant a watch, but here he falls back into his classicalist tendencies. Mangold is at heart an old-school dramatist and a classics nerd with a clear passion for fast cars, westerns, and Johnny Cash music. He’s perfectly willing to play ball and work within the modern studio system as his two Wolverine movies show, but he functions best with the leash off.

It’s appropriate that this is the ultimate point of Ford v. Ferrari. As Jon Bernthal says early in the movie, Ferraris are great cars not because Enzo Ferrari decided to make more cars than any manufacturer in the world, but because they’re uncommonly beautiful, stylish, and powerful. Their manufacturer went bankrupt to make the best car in the world and he succeeded in creating something to be proud of. Ford is a corporation that sells cars to the masses and they have business requirements to tend to. Much like the modern studio system in Hollywood, Ford needs to focus test and committee everything that rolls off its lot, quality be darned. The film ultimately celebrates the act of artistry for its own sake and revels in its character’s satisfaction with being able to do so. The movie is a call to auteurism and a challenge to the people that run Hollywood that great art comes from great artists given the resources to do what they do best. As such, I hope it does well in the box office and proves Mangold right. In a Hollywood as deeply homogenized and condensed as ours is right now, we need great artists. 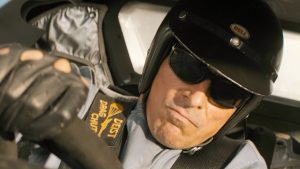 Edgar Wright remarked on Twitter months back that it was exciting seeing a movie made for adults come out in 2019. I'm implied to agree with him. Ford v. Ferrari is a fun slow-burn drama for those seeking an alternative to mainstream Hollywood excess.