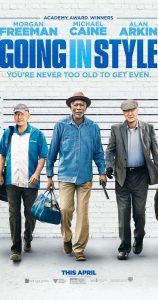 For those unaware, Going In Style is a remake of the 1979 film that is held as a classic with outstanding reviews. As seen in the original, the remake sticks close to the overall plot about three good friends attempting to rob a bank for the money that was taken from them. One of the largest pros and cons of remaking a film is recreating key plot points while adding new ones. New ideas and routes are certainly options that can make a movie better, but that is not always the case for remakes. For this film in particular, it is nearly split down the middle if whether or not this modern take on a classic is enjoyable.

Violence/Scary Images: No blood violence during the robberies.

Language/Crude Humor: One F-word is used during their first heist and the p**** is used from time to time along with other common swears.

Spiritual Content: As the Bible calls us to respect our elders let alone people in general, the film portrays a significant amount people respecting Willie, Joe, and Albert.

Sexual Content: Though nothing is explicit is shown, Albert and Annie are shown in bed indicating that they just had sexual intercourse.

Drug/Alcohol References: Albert jokingly talks about cocaine for a brief moment and one scene shows all three of men smoking weed and being high on the drive home.

Positive Content: Despite their crime, the cast of three greatly showed how important their brotherly relationship was as they continue to grow in new areas during their old age.

Aside from the fact that these actors are legendary among film, their chemistry mixes well together both in laughable and heartbreaking moments. The center of the group is actually Joe (Michael Caine), who comes up with the bank heist idea after being held up at a bank just weeks before. What personally made his character better than most who control a robbery or bank heist is the fact that he stuck by his words. He was not after power; he was not after wealth; he was after just what they each needed to pay for their homes, debts, and more.

Along with this, he was anything but controlling of the group as it was a group effort to make the heist work the way it did. Not only was the heist a team effort, but each man contributed to the struggle and success of their heist. Morgan Freeman’s character is very similar to Michael’s in financial struggles and wanting to be more with family. The way the two think is very like minded as if they are in-sync both in ideas and personality. Being the comedic relief of the group is Alan Arkin as Albert. Though he may come off as rude and obnoxious, he does so in a way that actually carries the plot along in the first half through laughs.

With most comedies, there is a good amount of drama to be found in order for the story to flow beyond laughs and giggles. At certain points, audiences begin to not just have sympathy but a large understanding as to why the group robbed a bank. With how difficult the economy has been in the last decade, it comes to no surprise that a specific number of audiences could relate to their financial and housing difficulties.

The unfortunate difficulty about the character development not appearing until the second half is first half suffers. While some jokes were shown in the trailer, it left very little room for audiences to really have a good laugh at them due to the writing and repetition. For a good 30-40 minutes, the first half received only a limited amount of laughs from audiences. While the second half definitely picked up in comedy and storytelling, the first half is anything but difficult to ignore. Along with this lack of character development, the main cast were as one dimensional as the supporting cast, from Joey’s daughter to Albert’s relationship with Annie. It hardly comes off as entertaining let alone interesting until the montage of the heist preparations.

Despite the strong main cast of legendary actors, Director Zach Braff’s film lacks depth and character development as he replaces it with one-dimensionalism. Though a significant amount is made up for in the second half, the build up significantly matters as it is a key element of capturing the audiences attention to be entertained. Overall, the film is enjoyable to certain extents. It just takes about 30 minutes for the entertainment to begin. Until then, audiences may be give small chuckles to comedic moments while checking their phones. 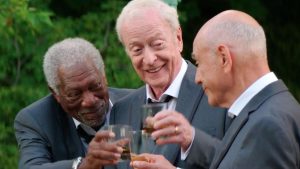 - Lack of interest during first half - One dimensional

While the second half was definitely more enjoyable both in comedy and drama, the first half drags on through forced jokes and one-dimensional characters that appear from scene-to-scene.