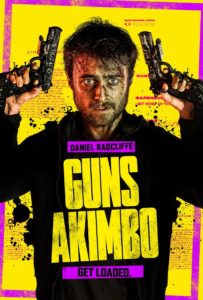 One meme in 2019 was based loosely on a scene from an upcoming Daniel Radcliffe movie. In the scene, Radcliffe is running through a street in his night robe carrying a pair of guns. The absurd image quickly became a joke meme but the movie would go on to finish production in the following year. Having since come out, Guns Akimbo was released to a disinterested public. That’s probably for the best since the meme is the best thing to come out of the film. 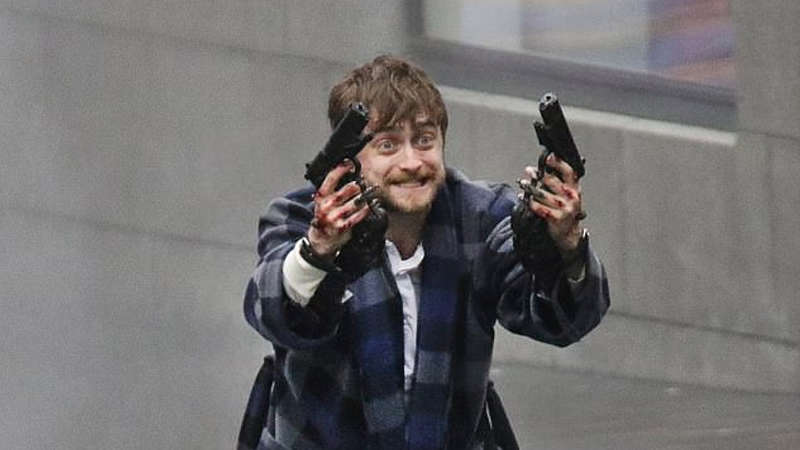 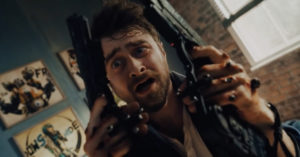 Is it fair to review a film entirely based on the fact that it was a meme long before it was released to theaters? An image of Daniel Radcliffe with two handguns stapled to his hands was shared around last spring from an early production still on a then unfinished film that was in production. Given his fame from Harry Potter and the absurdity of the image, it was quickly adopted as a widespread meme. Naturally, the film seemed to offer a bonkers premise and I wanted to see it. It received a brief limited release in February of this year before being released on DVD last month.

Guns Akimbo is a film in the style of Battle Royale and The Hunger Games. Society has embraced a widely popular death match as a legitimate sport called Skizm (pronounced Schism, because it’s an obvious metaphor). Society has seemingly allowed this obviously immoral live-contest because all of the cops in the world are paid off and everyone secretly enjoys watching brutal snuff films on the internet (satire…?). There’s a lot you can do with a premise that’s halfway between Lord of the Flies and The Truman Show. Both stories speak to the nature of humanity and together you might be able to fashion a story about violence, media consumption and the role the internet plays in facilitating humanity’s dark nature. The film even nominally tries to base its story on the hot-button topic of internet discourse and “trolling”. Sadly most of these ideas are skin deep. The “internet Battle Royale” setting is just an aesthetic. 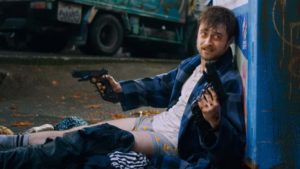 The film really doesn’t find much to say about these things. These ideas are just the prologue to the actual story wherein our lead character, Miles, is shown to be a self-described “troll hunter”. When he accidentally annoys the owner of Skizm, he finds himself an unwitting participant in the game with two handguns nailed to his hands and a death warrant on his head that other assassins are trying to fulfill. What might’ve been a delicately handled metaphor for the toxic nature of online discourse quickly devolves into a scatological, limp-wristed action flick that lacks any semblance of structure. It’s clear the film just wants to use its premise as an excuse to watch its lead actor run around like a doofus and getting people around him brutally murdered by accident.

What’s left is a wacky, over-stylized exercise in action-spectacle and action movie cliches. Radcliffe is clearly having a good time embracing the insane nature of the film’s direction. As seen in Swiss Army Man, he’s a great actor when you need someone dedicated to doing insane, wacky performances. He’s not afraid to embrace these roles and make the most of the insanity. Sadly there’s just no structure for his character to evolve within the story. He starts out as a wimpy video-game designer and ends as a brutal vigilante. The duration of the story is just him acting like he’s in over his head.

Besides Radcliffe though, the film doesn’t have much to offer. The film’s Snyder-esque stylized action scenes are all brutal and bloody, and the film finds plenty of time for profanity and sex jokes. The side characters are one-note and over-acted. As far as being a good film with a clever premise, it leaves much to be desired. I would’ve liked Guns Akimbo more if it had leaned into its premise or rewrote it to suit its central bonkers performance but it doesn’t do either of those things. It’s a half measure and it ends up just being empty and gross. I can’t in good conscience recommend the film to anyone unless, like me,  you REALLY want to know where the Daniel Radcliffe meme came from…

Guns Akimbo isn't worth seeking out as anything greater than half a novelty at best. Radcliffe's attempts to challenge himself in strange roles are commendable but it works much better in a film like Swiss Army Man rather than this...